Been having a rather arty week.  One of the graduate students in the art department will be doing a display of Pre-Columbian pottery at FSU's Museum of Fine Arts in the fall, and I'm working with her to do a display of the pre-Columbian textiles as well.  More on that later.   This week she was meeting with art students from FAMU to discuss the pottery, and I joined in.  The pottery is beautiful, but what makes my little heart go pitty-pat is that is from the Nazca culture--the same one that made the mysterious line figures in the desert.  We were holding (very carefully!) items that are 1,500 years old. 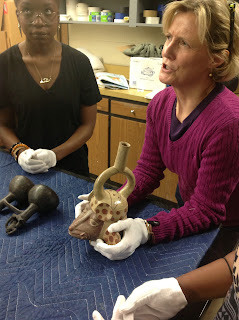 When we finished, I had about a half-hour before I had to go meet Bob--not enough time to go back to the office and do anything, so I wandered upstairs to the art gallery instead.  The Museum of Fine Arts is about a block and a half from my office--which means I rarely get there.  When we go on vacation we always spend hours in any museum that we can find, but somehow you never get to the one next door.  The current exhibit is on science-based art--and was so interesting that I took Bob back there later to spend some more time with the pieces.

One installation is a modern-day version of Tibetan Prayer flags.  Traditionally, prayers are written on cloth, with the idea that the wind blowing the flag will take the prayers heavenward.  These flags are printed with the genetic code for currently incurable diseases. 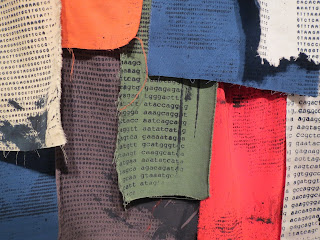 A very moving piece was one dedicated to the World War I veterans who were treated with early experiments in plastic surgery.  The writeup wrote of these men who returned home to a culture "that glorified the war dead but recoiled in horror from the survivors." 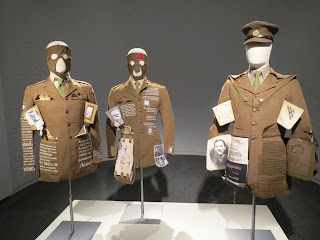 A series that I found attractive but disturbing were all done in a very compelling shade of brownish-red.  The artist gives his work a personal touch by painting with his own blood.  This piece is a Victorian-inspired floral work, based on a Rorschach blot. 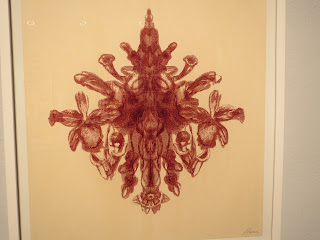 Continuing this week's arty theme, we spent this afternoon at the Quincy Music Theatre watching a production of "Oklahoma!"  Our young friend Eliza (previously seen in this blog as Rosie the Riveter and at the Downton Abbey exhibit) was in it.  Good singing, good dancing.  I enjoy live theatre--but, like going to the fine arts museum, don't get around to going very often.

Finally, we did an art installation of our own.  The wall above the couch in the den seemed a little blank, so we installed a couple of shelves, covered in carpeting.  In the best tradition of "if you build it, they will come" our object d'arte soon appeared on the shelves. 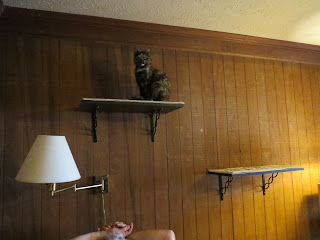 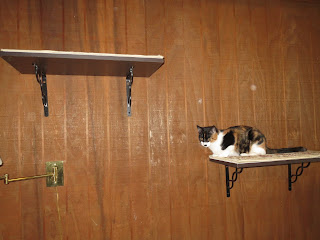 The year is cyclic--so I find myself posting about the same thing as last year.  For one--Jax Con.  This is the scale model convention held in February in Jacksonville.

I end up being useful.  Bob and some of the other members of the club tend to collect models--and realize they're never going to build some of them.  So this is a good time to sell off some of them.  But the problem is that they'd rather spend the day walking around looking at all of the models on display.  That's where I come in.  They look around, and I man the sales table.  I get Good Wife points--and get some knitting done. 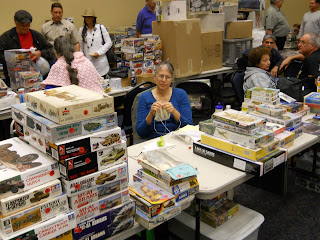 There was both good and bad news for Bob.  There was a lot of good competition this year--it really makes the show more interesting.  But it was the first year he entered that he didn't bring home a first place (but did get two seconds and two thirds, so it was still a good show).

Last Saturday was the Matinee of the Arts at the Museum.  I had originally been scheduled to work at a program that evening at the Museum so I wasn't scheduled to work during the day.  The evening program was cancelled, but I opted not to work anyway.  I've worked (demonstrating spinning on the porch) at the matinee for years--which means that I had never actually seen it.  In theory, I could take a break and wander around.  In practice--kids will treat a spinning wheel like a jungle gym.  So we met up with Rob and Jeff and enjoyed ourselves.  Local artists had a display of sketches from around the museum, there was live music, the animals, a friend demonstrating scrimshaw, jugglers, a wandering barbershop quartet. 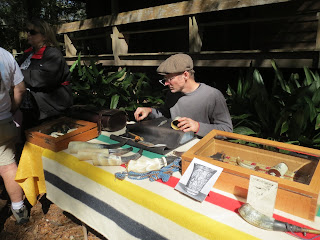 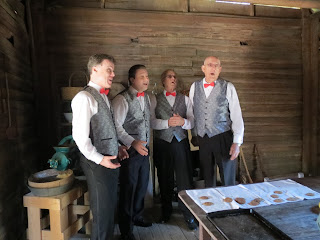 After lunch, we went to the fairgrounds for the alpaca show.  We've been several times--but alpacas are just so freakin' cute that we'll go every time they're in town.  So far I've resisted bringing one home with me . . . 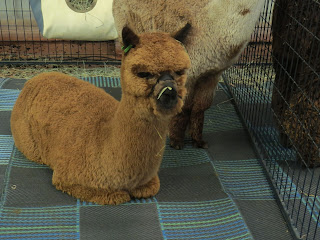 And now the obligatory cat photo.  We had tossed some laundry in a chair, and Fiona, RiverSong and Noko Marie liked it.  Fiona is the queen cat, now about 14 years old, and has never really acknowledged the presence of other cats in the household.  But, surprisingly, she has really enjoyed the kittens. 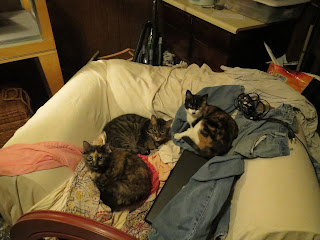 I've mentioned that I'm working with the Goodwood Plantation on an exhibit they're doing as a fundraiser.  One of the dresses they want to display is a lace wedding gown.  When we were looking at it, we noticed a few holes in the lace.  I said that I'd reinforce them before we used the dress.

When I laid the dress out and started studying it,  There were more than a few holes.  The button band was torn along its entire length, and the back between the collar and shoulder was rather shredded.

Needless to say, this is fussy work--the trick is to put a piece of fine nylon net (tulle) under the tear, and then gently tack the lace to to tulle.  Problem is--as soon as you put the tulle under the lace, the hole disappears.  You have to gently rub a fingernail under the edge of the fabric to feel where the tear is as you sew.

But a few hours later I'm almost finished, and have to say that I'm quite pleased--I've managed to make the tears disappear. 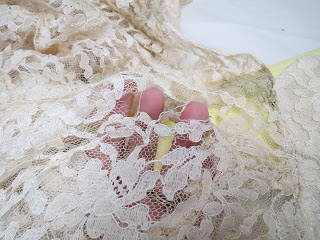 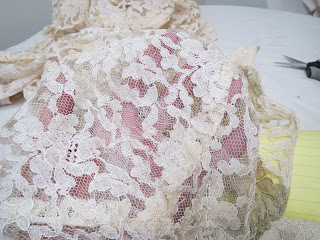 Thank goodness for clamp-on lights and magnifying glasses!
Posted by Ann at 5:21 PM No comments:

OK--so it's February 10 and I'm still finishing January.  Shoot me.

Got some yard art.  I wanted a bird bath for the butterfly garden, and found the perfect one.  The cement looked a little raw so I brushed some wood stain onto it. 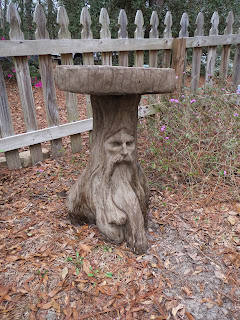 I've tagged this "Radagst" after Radagat the Brown, who is alluded to in Lord of the
Rings but never actually appears.  He's a wizard who prefers to live in the woods with the animals than bother about all the fighting between the bad guys and the good guys.  I always pictured him as a cross between a wizard and St. Francis.  So you can imagine my *huge* disappointment when I saw "The Hobbit" and found that this was how they portrayed Radagast: 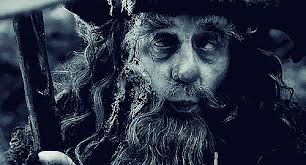 Yes--that's bird crap on his face.  And he has a sled pulled by magic bunnies.  Sometime film adaptations go too far .  . .

Was able to get the workshop pictures.  This is the fabric dyed with rust. 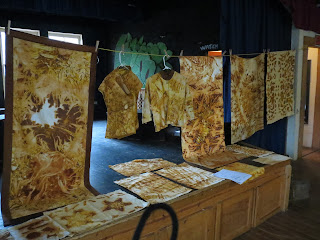 And some of my band weaving 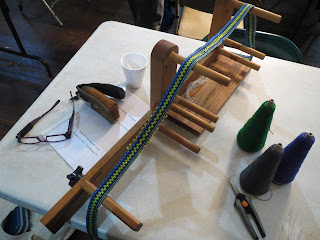 Margo was complaining about the lack of kitten pictures.  It's hard to get the little furballs to hold still--but here they are: 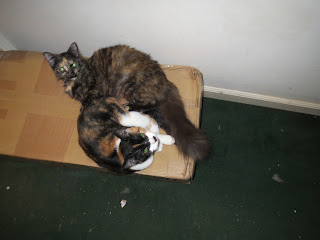 Stay tuned for February--hopefully before March!
Posted by Ann at 6:41 PM No comments:

A Tale of Two Workshops

Five weeks since the last post!  Shame on me!  It's not entirely my fault.  For the last 2-3 weeks the internet connection has been getting increasingly wonky--it just kept flipping in and out.  It was OK for a quick email check, or to look at a web page (with some patience to load) but kept having the hiccups when I tried to write a blog post and loading pictures was impossible.  When the TV kept pixelating to the point that we couldn't watch that we gave up and had the repair people out.  Why procrastinate?  Because it took three people over the course of three days to do it.

So  . . . back to January.  We rarely have spinning or weaving workshops in town.  (I can't complain--if I wanted more I could become an active member of the weaving guild, do some fundraising, find a place to host a workshop, and schedule and instructor).  For some reason, the weaving guild scheduled two workshops two weekends in a row.  I couldn't decide which one to take--so I took them both.

The first was on inkle weaving--using a small portable loom to weave narrow bands or ribbons.  They're pretty basic but with a little work you can do some complicated things with them.  There was also a side topic of dyeing fabric with rust (basically, wet cloth down with vinegar and water and wrap it around something rusty).  My sample didn't turn out but the instructor had some lovely pieces.  Of course, the downside of this technique is that sometimes the rust will eat through the fabric . . .

The next week was a cotton spinning workshop.  Actually, I've spun cotton for years and am pretty good at it, but it was a rare chance to get together with other spinners for a couple of days, and I did pick up some good tips.

Please notice the timing of these workshops--I had mentioned in the last post that I had a bad case of the flu--in early January.  I think (I hope) I was past the contagious stage, but I sure didn't have my energy back, and these were 8-hour a day workshops.  I didn't participate in any of the social activities afterwards--just went home and collapsed.

And the new term started in January.  Although I'm not teaching, I had to get back to work in the historic collection and working on the clothing exhibit for the Goodwood Plantation (more on that later).  We had Noko Marie spayed, but she got sick afterward so we had to hover over her for a few days (she's fine now).

By now you've noticed a lack of pictures in this entry.  Our camera was having problems so we got a new one--which I've downloaded from before but now it doesn't want to talk to the computer.

And a friend took the DVD from my skydiving and made it into a file format so I can put it on YouTube--but YouTube won't let me set up an account to post it.  Technology is not my friend.  Stay posted . . .
Posted by Ann at 6:30 AM No comments: