Brother Michael came to town for the weekend. As usual, it was a non-stop talkfest.  Michael is fascinated by anything and everything, and carries a little notebook to jot down the endless ideas.  For example--I was going to make waffles for breakfast.  Like pancakes and biscuits, waffles are best made with buttermilk.  The problem with buttermilk is that I don't really ever drink it.  So you buy a quart, use a cup, and the rest eventually gets fuzzy.

So I amaze the brother by pulling out a box of powdered buttermilk.  Not only is he jump-up-and-down excited (and grabbing the notebook) but immediately wondered if you could make crème fraiche with it [aside: crème fraich is a mild sour cream made by mixing cream with a spoonful of buttermilk and letting it set for a few hours].   I thought that the drying process would kill the active cultures.  He countered that dry yeast activates when you put it in water.  My stand was that yeast is a fungus, not a (friendly) bacteria.  Nothing for it but to go buy a carton of cream and try it out (I won that round--it didn't work).

He's non-stop--the very definition of a whirlwind visit.  In fact, this is what my living room looked like when he left: 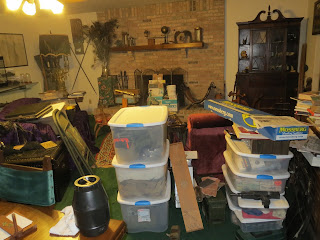 OK--this wasn't directly his fault.  Usually my guest room is occupied by furry guests (and Michael is decidedly not furry).  On the occasions that I do have human guest, the furred creatures get moved to Bob's room.   Now, Bob has a lot of . . . stuff.  And he's really good at packing it into every nook and cranny.  And, uh . . . I had to explain to him why Mike and I were on out hands and knees in the dark, with red flashlights, looking under everything. 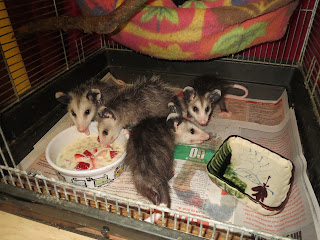 They got out of their cage.  All four of them.  And there was nothing to do but start a fireman's brigade and get the . . . stuff . . . out of Bob's room so the little buggers wouldn't have anyplace to hide.  We eventually found them, and even got to bed by 1:00 a.m., and Mike decided it was time to return to Boston.

He left before we put the new art installation.  Actually, it's a collaborative effort between us and a turtle.  I was getting ready to pull out, and had to go around a large turtle who was laying her eggs in the middle of the driveway.  In theory, we could have dug them up and reburied them elsewhere--but her turtle instinct had told her that this was the best spot for her eggs, so who were we to argue?

Raccoons are always a problem.  They can smell even buried turtle eggs, and they're a delicacy.  So we staked a steel rack over it, with a dish of ammonia to sting those sensitive nostrils.  And a stake so that we remember it's there.  It takes about three months for turtle eggs to hatch, so we'll be dodging it for awhile. 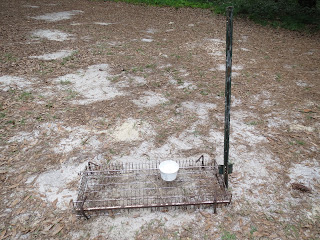 Books and Projects and Mysterious Cats

Things have been kind of random for a couple of weeks, so it's time for a random post.

First-going to add a book feature to the blog.  I've always been a reader, but sometimes (OK, often) find myself just re-reading old favorites.  One, it's comforting.  But sometimes it's because I just can't think of what to read next.  I'm too cheap to go to the bookstore and buy books, and don't often get to the library.  I seem to have wide-ranging interests.

I did break down and get a Nook reader.  Not a table computer, just a reader.  I know myself well enough that if I sat down with a table to read, I'd probably check my email, do a little web-surfing, and play Sudoko.  Nope--this one just reads.  What pushed me into it was the Gutenberg Project
(http://www.gutenberg.org/)  This organization is digitizing books that are out-of-copyright and making them available for free.  So far they have some 42,500 titles.

None of the books are on the current best-seller list--they have to be some 75 years old.  That's OK--I like the older stuff.  One thing my father and I have in common about our reading is that we enjoy rich description, something you find in older books.

Some of my recent reads:
Paul Gallico, "Love, Let Me Not Hunger."   It's hard to get a handle on this author.  He does children's stories.  He does cute stuff ("the Silent Meow").  He does the charming "Mrs. 'Arris" series (about the adventures of a rather spritely, not to meantion spunky, elderly lady).   He does mysteries.  And he does rather dark stuff.  This one is a strange surrealistic story about a small travelling circus that gets stranded in a little Spanish town, and the extremes they go to to survive, and to attempt to feed their animals.  It's heartbreaking and sad and heartwarming and just plain weird (we're not told exactly how the extrememly fat but rich Spanish woman they cater to for animal food kills the dwarf she took a fancy to--but we think we have a pretty good idea . . . .

Neil Gaiman, "American Gods."  Gaiman is another dark and complex writer. As people stop believing in gods, new ones take over.  This is a battle on earth between the new and old gods--that ultimately comes down to the beliefs of the people.

OK--not going to summarize everything or this post will get too long.  Just a sample:

An 1896 book on social ettiquette (a real book).   I just get a kick out of old etiquette books--they give such an insight to a culture.  And much still pertains--or at least I wish it did).

Some classics on the Nook--Around the World in 80 days, Silas Marner, The House of the Seven Gables, How to Live on 24 hours a Day (a 1920's self-help book), and The Importance of Being Earnest.

That's the catch-up.  The current reads are one of the textiles of Oaxaca (I'm giving a talk next month), another on textile motifs of Andean textiles, and another etiquette book, this time an 1860's Gentlemen's book of Etiquette and Manual of Politeness.

OK--enough of books.  Some project.  I realize I've been weaving off-and-on (mostly off) for 10 years or so and have never made placemats.  Probably because I usually don't usually use them (I find it easier to wipe off the table than to wash a placemat. 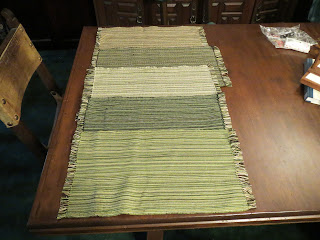 It's baby critter season for my rehabber friend, so I made her some hanging nest bags for the baby opossums and squirrels (I also brought home 6 little possums yesterday--they'll be in the next blog post). I had made some little knitted bowls for baby bird nests but forgot to take a picture. 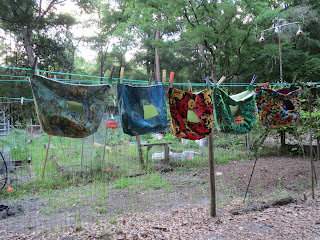 I'm also still spinning and knitting the lace shawl that was in January's post--only about 12 rows to go, but each row is some 500 stitches so it will be awhile yet.

To finish this post--RiverSong must have heard about the old trick of holding a flashlight under your chin to look mysterious while you're telling ghost stories. She struck her classic cat pose on her upper perch when the lamp below it was on. 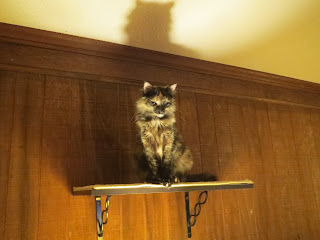 And now I have to get out of here and go train that hawk.
Posted by Ann at 6:43 AM No comments: