I taught a tie-dye class at FSU yesterday--15 students dyeing silk scarves.  Did I think to take my camera??


When class was over I turned on my cell phone so I could call Bob--and had messages from two people with baby squirrels.  One was at the museum, and there was a time limit--if I didn't pick them up, they would be fed to the snakes (urg--I know snakes have to eat, but little squirrels?).  The other was from the Florida Wild Mammal Association.  So I rescued the two from their snakey fate, and the others I'll pick up next week (FWMA knows how to take care of them).  Then I should stop for awhile. 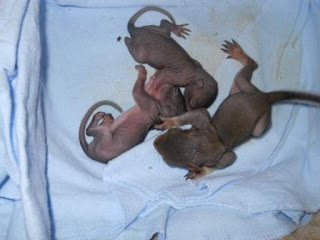 Here's the three I have now--the one I've had for three weeks and the two new ones.  One of the new guys is having problems--it's not easy to fall out of a tree--but I'm doing my best for him.

We're stepping up on the Halloween stuff.  Like many things in life, you can have good, cheap, or fast--pick two of the three.  If you want it good, and cheap, then you have to start working early.  Bob's been shopping at Curbies (everyone's favorite--it means that you grab stuff that's being thrown away) and we've been hitting the Good Cents store (the cheap part of Goodwill).  He brought home three tall pillars, a tall plastic candlestick, and various dolls.  The pillars and candlesticks were given a quick marbeling job, which greatly improved their appearance.  He's also hung more dolls on the fence to age. 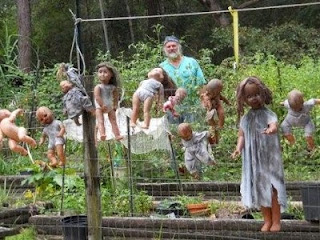 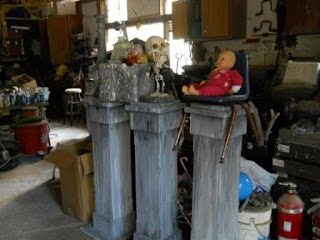 I've been working on more frames for my wraiths.  They're not quite as impressive when they're headless and naked.  I also did a super-easy but creepy effect by painting aluminum foil and then smashing it onto my face.  I think we'll do many of these to put on trees out on the trail. 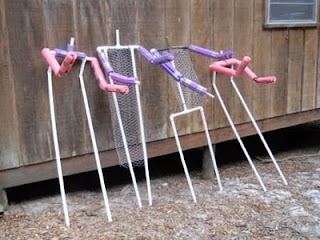 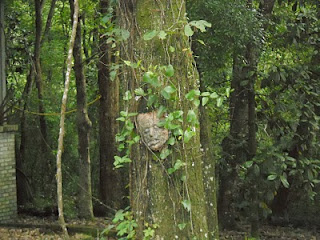 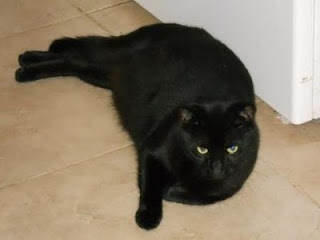 Nazgul started out by being a shadow just glimpsed out of the corner of your eye--something that would disappear if you looked straight at him.  Then he crept closer.  One night we saw glowing green eyes gazing at us in the dark--and that is when he earned the name Nazgul (The Dark Riders in the Lord of the Rings).  Eventually he came closer.  Now he's decided that inside the house looks pretty good.

It's a good thing we named him before we knew him.  He looks very elegant, but he's a grabber of ankles and "helps" Bob to tie his shows and tends to trip us when we're trying to walk across the yard, thus earning his second name of "Major Silly Pants."

Picture doesn't do justice to his eyes--they really are emerald green.
Posted by Ann at 8:32 AM No comments: 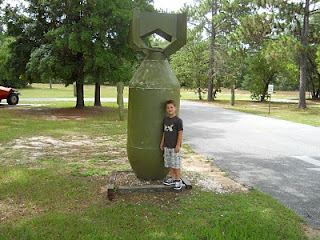 Our niece Amanda and her son Dane are visiting her mother (Bob's sister Della) in Mexico Beach for a few weeks.  Bob went down Saturday to have a guys day out with Dane. 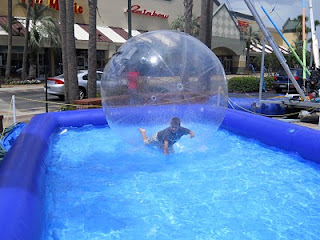 In a way this was a homage to his father.  They had planned to have a guy's day last Christmas and take Dane to the Air Force Armament museum--but we lost his father before Christmas.  So Bob and Dane had the trip.  They went to the museum, played some goofy golf, and then found a small carnival where Dane could play in a ball in the water.
They had a great day together.  Bob did make the comment that any middle-aged man having a mid-life crisis should spend a day with a 7-year-old before marrying that young trophy wife.  There is, he said, much to be said about a nice middle-aged, unfertile woman  :-)
Squirrel update 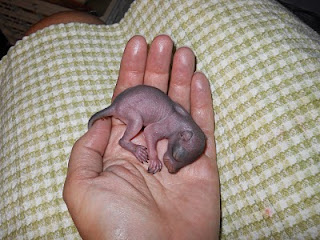 It's been about 10 days now since I got the little squirrel.  She's almost twice the size (almost an ounce now), has tiny whiskers and is starting to consider growing some fur.  In this picture she had just finished eating and promptly fell asleep.
Posted by Ann at 7:01 PM No comments: 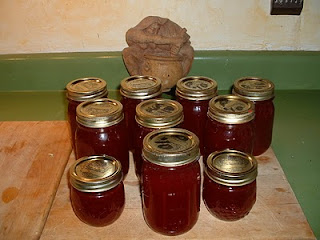 We had enough cold weather this past winter that the plum trees bore fruit.  We didn't eat much of it because Bob is a big fan of plum jelly so he hoarded the plums in the freezer until we had enough for a couple of batches.
I baked a loaf of bread the same day.  Bread and jelly is such a simple thing--a nursery snack--but in this day and age few people have ever had real bread with real jelly.


It reminded me of when Mom would time her bread baking so that the loaves were coming out of the oven just when Mike and I got home from school.  Poor Dad would come home a couple of hours later to a home that was still wafty with the scent of fresh bread--but not a crumb left, and a wife and two kids too full to be interested in dinner.
Starting to plan the Halloween trail now.  Yesterday I was talking to Thomas--one of the guys who does the haunted maze.  He is looking for a source of cheap mannequins to dress in robes (there will be real people mixed in with them).  "Cheap" is the operative word.  I told him that he didn't need anything realistic--the human psyche is hardwired to interpret anything even vaguely human as a person (the same hardwiring causes us to see human faces in clouds, tree bark, and any two dots and a line).  To prove my point (and I'll need some wraiths myself anyway) I knocked this together.  Amazing what a couple of old sheets can accomplish: 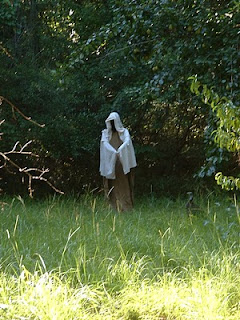 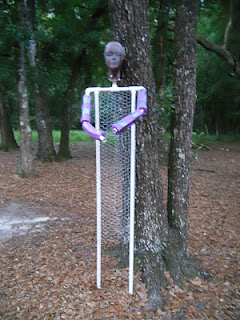 CRITTER DU JOUR
And it's that season again.  Got a call last night from a friend whose neighbor found a baby squirrel.  This little girl is probably about a week old and so far is doing well.  And yes--that's a quarter beside her.  Now I have to try to find a couple more so she won't be on her own.  Looks like 2 a.m. feedings for awhile. 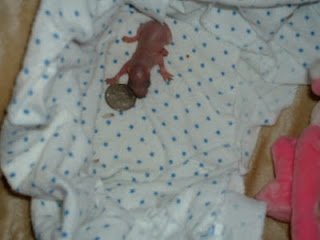