Please do not buy chicken de-wormer in small beige pellet form, put them in the same type of recycled peanut-butter jar that we keep the roasted sunflower seeds in, and leave it on the kitchen counter.

Sorry about the salad.

Valentine's, and Other Days

February seems to be getting away from me.  Actually, the spring term in general has turned into a major game of catch-up.  I had my schedule fairly well planned, with my three part-time jobs:  On Mondays and Fridays I would work in the collection, Tuesdays and Thursdays would be in the costume shop, and Wednesdays at the museum.  The best laid schemes of mice and men . . . . .

The problem is that the department also needed me to teach a textile lab (saying "no" wasn't really an option as the collection job probably would have gone away with it).  It's not difficult, but it does take 4-5 hours a week (2 to teach, the rest to prep, grade, and help train the other lab instructors).  It's just hard to wedge it all in.  Today, for example, I put in a couple of hours in the collection in the morning, worked at the museum in the middle of the day (including giving the opossum a manicure) and then back for the lab instructor meeting and training.  No wonder I'm tired when I get home!

Valentine's day was . . . different.  I worked, and Bob helped me.  The Museum had it's annual "Frolics of Florida" where I give a talk on weird animal mating habits and variations of body part designs (while keeping a straight face).  This is followed by a night walk of the zoo trail and more body part discussion.  It's actually a lot of fun, and a good fundraiser (30 people attended).  If you want an idea of the tone of the evening, watch "True Facts about the Angler Fish" on YouTube. "Spamalot" has now opened (I'll be seeing it next week) so I'm through sewing/weaving for that.  Here's a sneak preview of the sample costume for the Knights of Ni with the shoulder panels that I wove.  (the real costume is gray felt with vines and leaves on it).

And Matt (the costume designer) made me a thank-you gift!  I was touched, especially considering how busy he was with this play.  He framed a drawing of his concept art for the Knights of Ni and added some collage and a thank-you note.  Such a personal gift--it promptly went into the Hall of Fame (our art gallery) (I tried taking a picture of it but the sketch doesn't show--rats).

Meanwhile, back at the theatre, we're sewing for Dangerous Liaisons.  My job so far has been to construct the humongous stiff petticoats that will hold out the skirts.  Each one is seven gradated layers of heavily gathered net--about 20 yards of net for each one.  Sewing this has been a real struggle--it takes a lot of effort to get it wedged under the sewing machine.  Sometimes I feel a little lost in there. 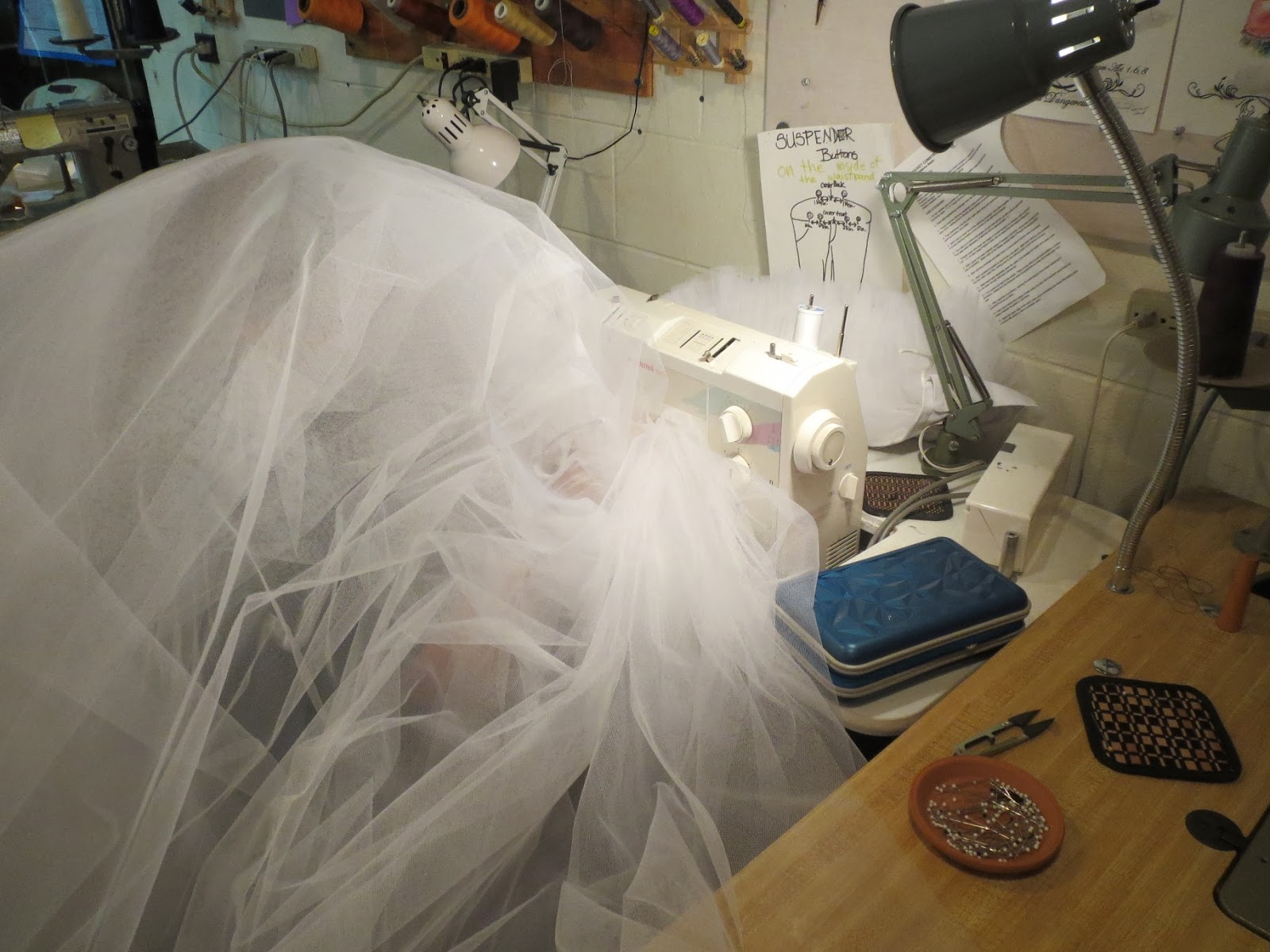 Yes, I'm in there somewhere. 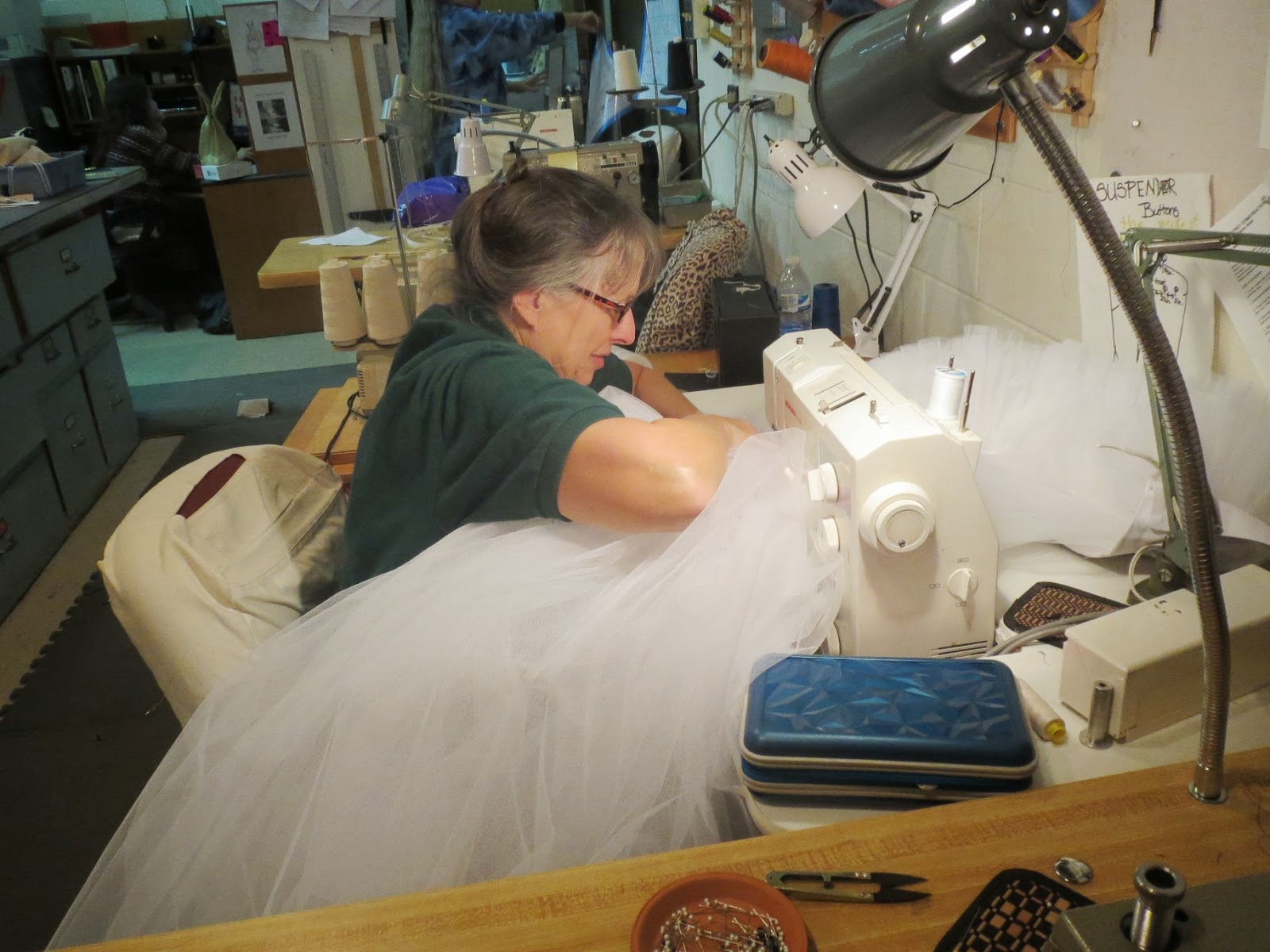 Trying to get it all under the needle.  The elbows and shoulders get very sore. 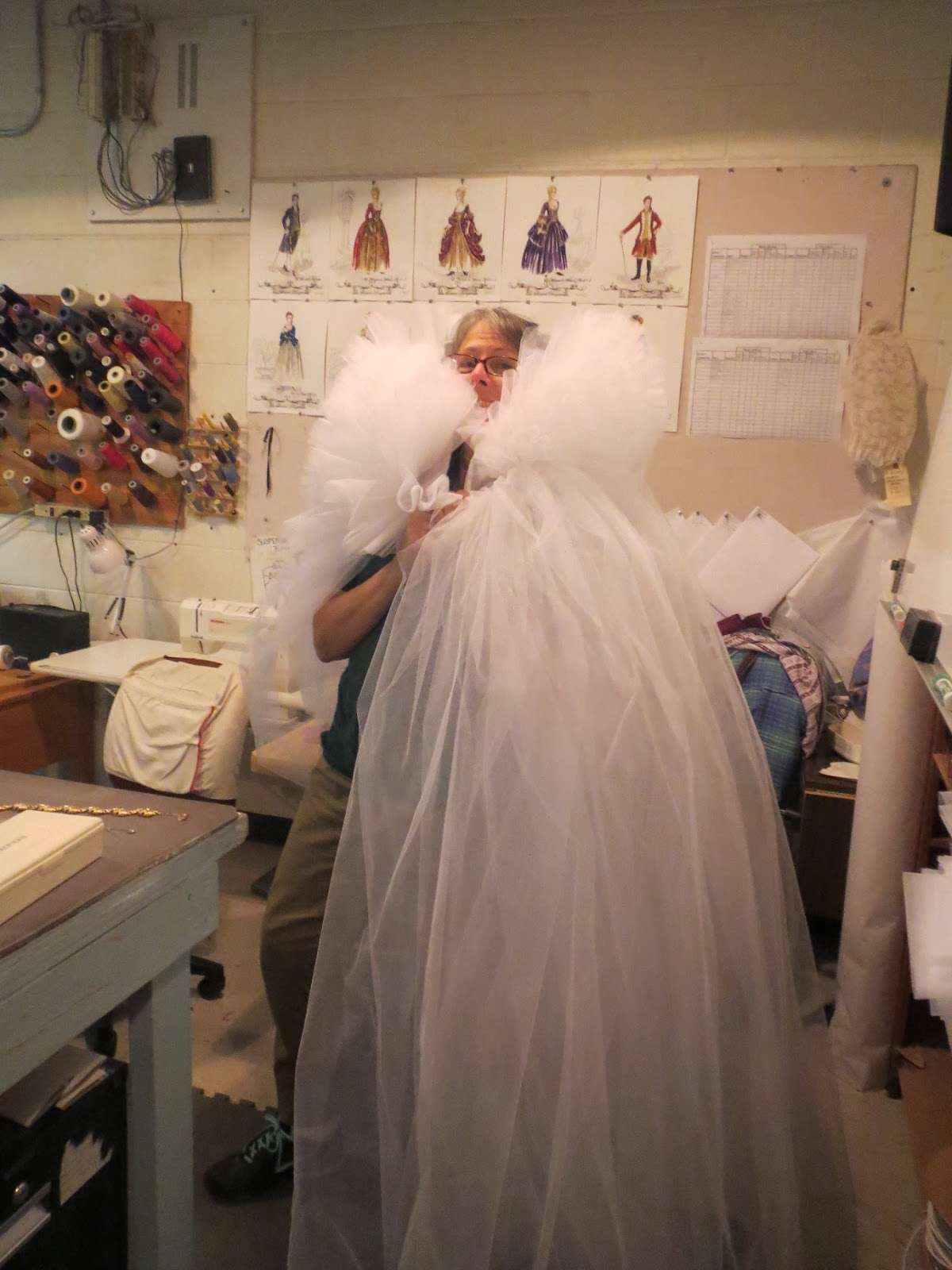 If we turn it upside down, it makes a great cape 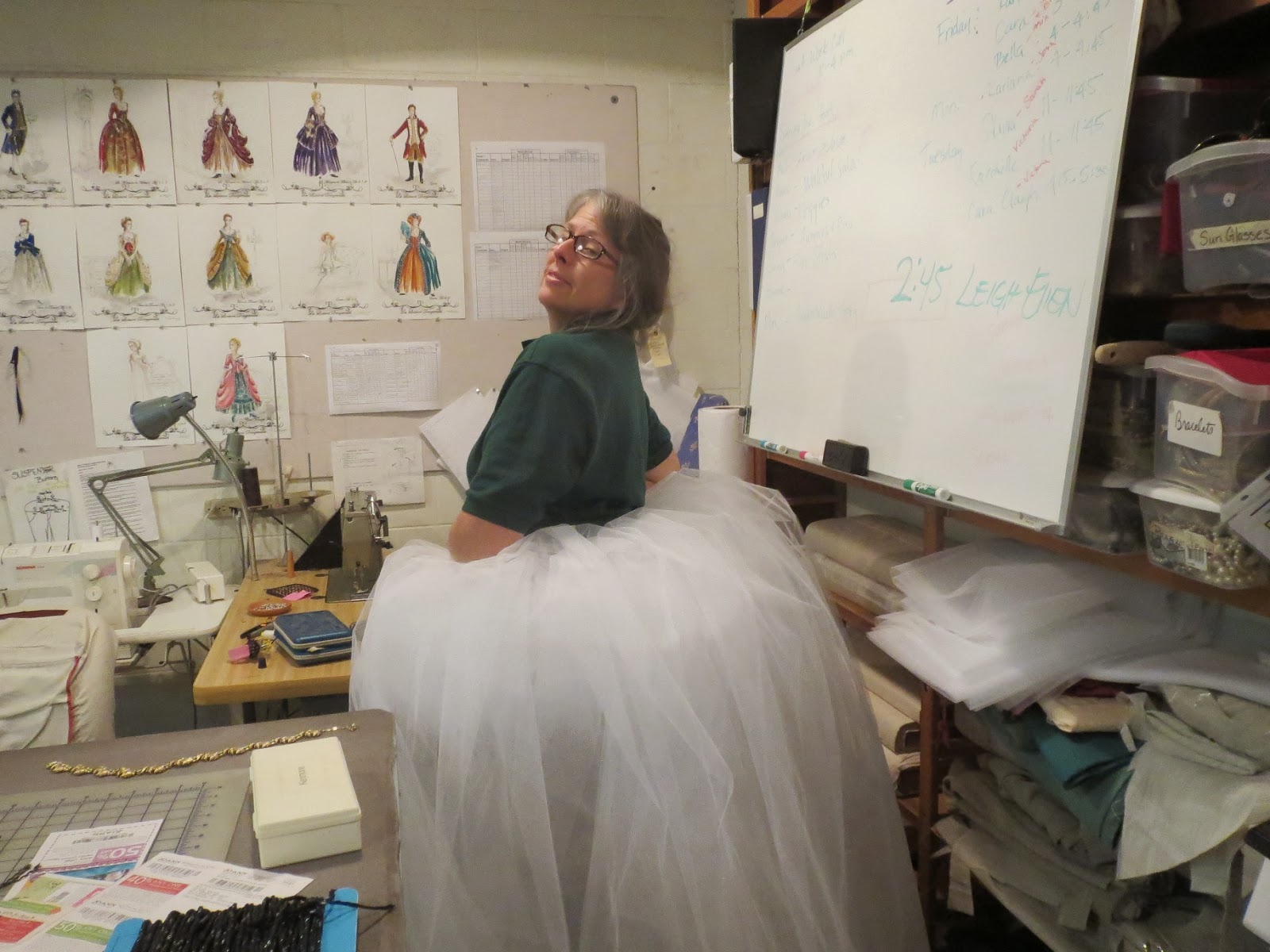 Does this petticoat make my butt look big?
and now--good night to all.
﻿
﻿

Several years ago I was talking about gardening with visitor from Vermont.  I was giving my latest hint--if you have a problem with armadillos digging up your garden, just lay down some stock fencing on the ground before planting and the wire will discourage them.  "Armadillos?"  he said.  "That's very exotic."

I hadn't thought about them being exotic.  They're pretty common around here.

Ice, on the other hand, is exotic.  Not the tame stuff that comes from the freezer, but real wild outdoor ice.  It's just not something we see very often.  But last Wednesday we had an Ice Day (it was supposed to be a snow day but we were disappointed in that).  Schools were closed, and we got a free day off work.

The rest of the country probably thinks we're wimps.  Someone (from Colorado) sent a friend a cartoon of a glass cubes of ice tipped over on a sidewalk and a caption of "Oh Not!!  Close the Schools!"  They're probably right--after all, it was 30 degrees above zero.  But it was raining ice.  Yes, technically I know that it's called "sleet."  But in my mind, sleet also has snow involved, and I feel it should have wind.  This was just solid rain.  Raindrops on the bushes that didn't fall off, even if you shook them.  Rain that landed and didn't run off or soak in--just whitely lay there. If you walked outside, the raindrops bounced off of you instead of getting you wet.   Fascinating.

It was the sound effect that enchanted me.  A sort of crinkly sound, like being in a huge bowl of Rice Crispies. 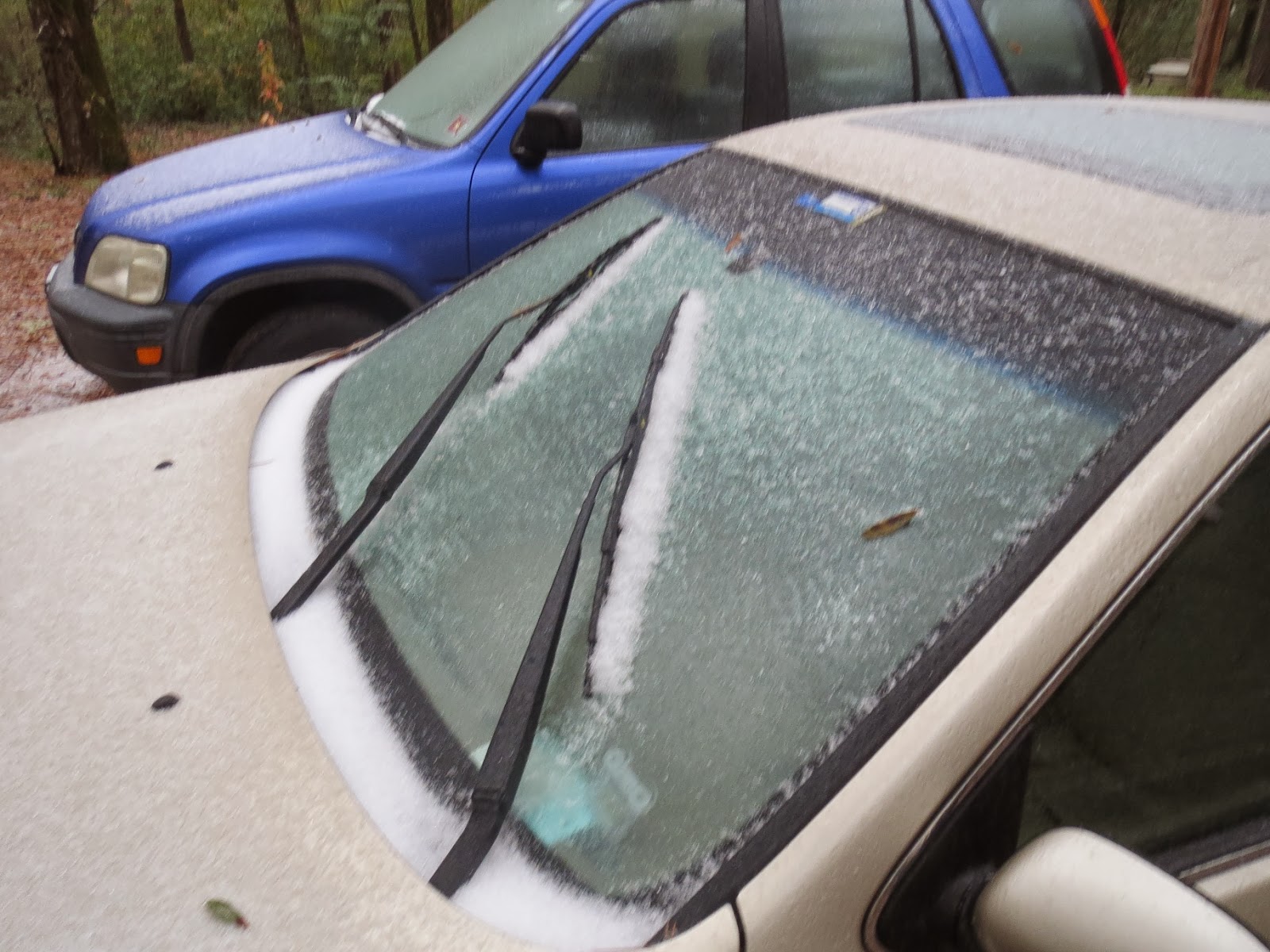 So yeah--we were wimps.  Stayed home and lit the fire.  It was fun to look at the ice, but I was glad I didn't have to drive on it.  And it was gone before the novelty wore off (like by the next day).  Today we were back to normal--working in the garden in our T-shirts.

For a day, we liked the ice.  It was exotic.