Fame, Mummy and Other Babies

Eventually I'll work up to my 15 minutes of fame--I got a few more in this month.  We had a partnership day at the Museum with PBS--I got filmed with the animals and in theory I'll be used in conjunction with kid shows like the Wild Kratts to show that you can see animals right here in your home town.  I haven't watched the shows yet to find out.

I had mentioned a post or two ago that I was going to be a guest blogger for Spinning Daily (the web page associated with Spin Off Magazine).  Well, it happened, and my first post is here:

My third brush with fame concerned the Historic Collection (even though I'm not working there anymore).  As a student project, some students held a fundraiser for the collection, and did an interview/videotape of me talking about it.  I was really impressed with their editing--in reality I rather rambled on a bit.  But here I am:

In other news, spring has sprung.  So have the weeds in the garden.  There are some plants in there also that we meant to have there (such as peppers and tomatoes and cotton) but we have to go find them.  Been raining, and the weeds love that.  So did the colds that Bob and I both had last week.  He's recovered.  I mostly have, except that he's had a few days of peace and quiet because I have total laryngitis.   I didn't have anyone to cover me at work yesterday to do the animal encounters, so Bob was kind enough to go along and be the Voice of Ann while I held the animals.  After three days of this it's starting to feel like we're Penn and Teller.  It's oddly isolating--things like having to go get Bob when the phone rings because I can't answer it.

We went to the annual Art in the Park this last Saturday (when I still had a voice).  Forgot to take the camera, but we enjoyed looking at all the artwork.  One piece came home with us.  For years, I've had this thing about finding a "mummy baby."  Like when opening an old trunk in the historic collection--"maybe there's a mummy baby in there."  Or seeing a dusty cardboard box in the back of a garage sale "oooo--might be a mummy baby."   (Note:  I would probably freak if I ever did find a real mummy baby)

So we're strolling along, and Bob looks over at a booth and says "Mummy Baby!"  Sure enough--there were three mummy babies hanging up on a wall.  I try not to buy stuff on impulse, so we wandered through the rest of the booths--and then I went back and got it. 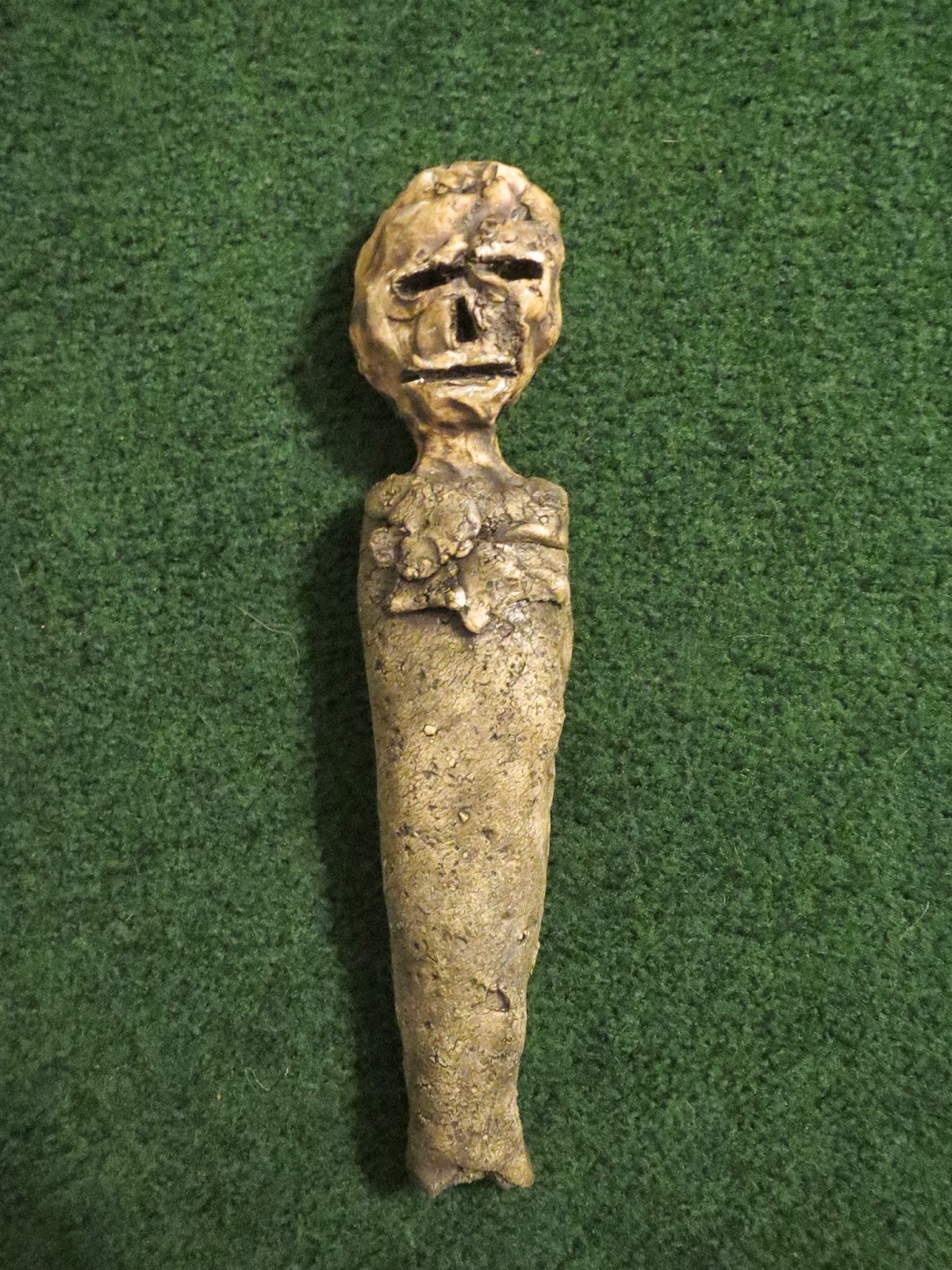 There are some cuter spring babies around here.  The wrens on the back deck have hatched and started to feather out. 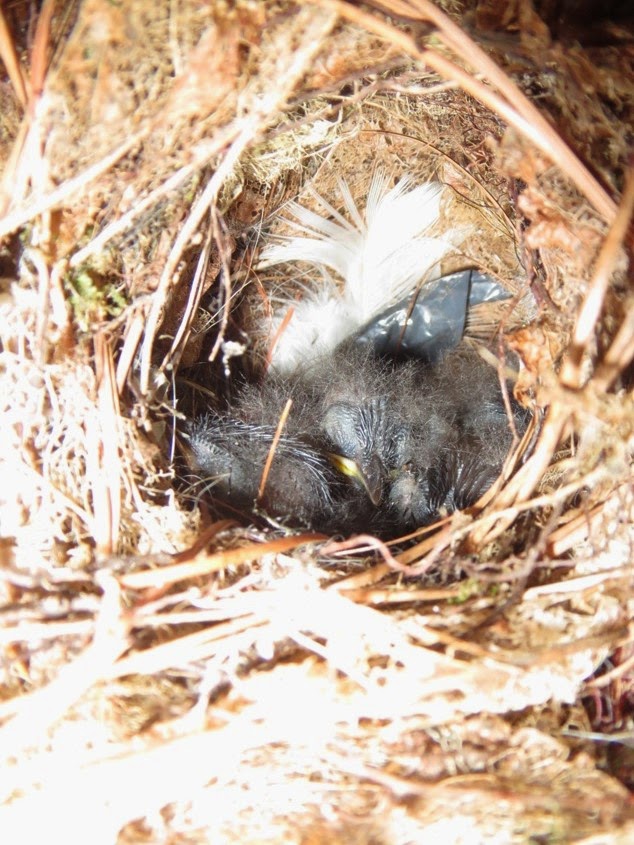 And my animal rehabber friend is up to her ears in baby possums, so I brought home two litters today.  One group had just come in, and are still rather skittish (don't blame them--their mother got killed by a dog)\ 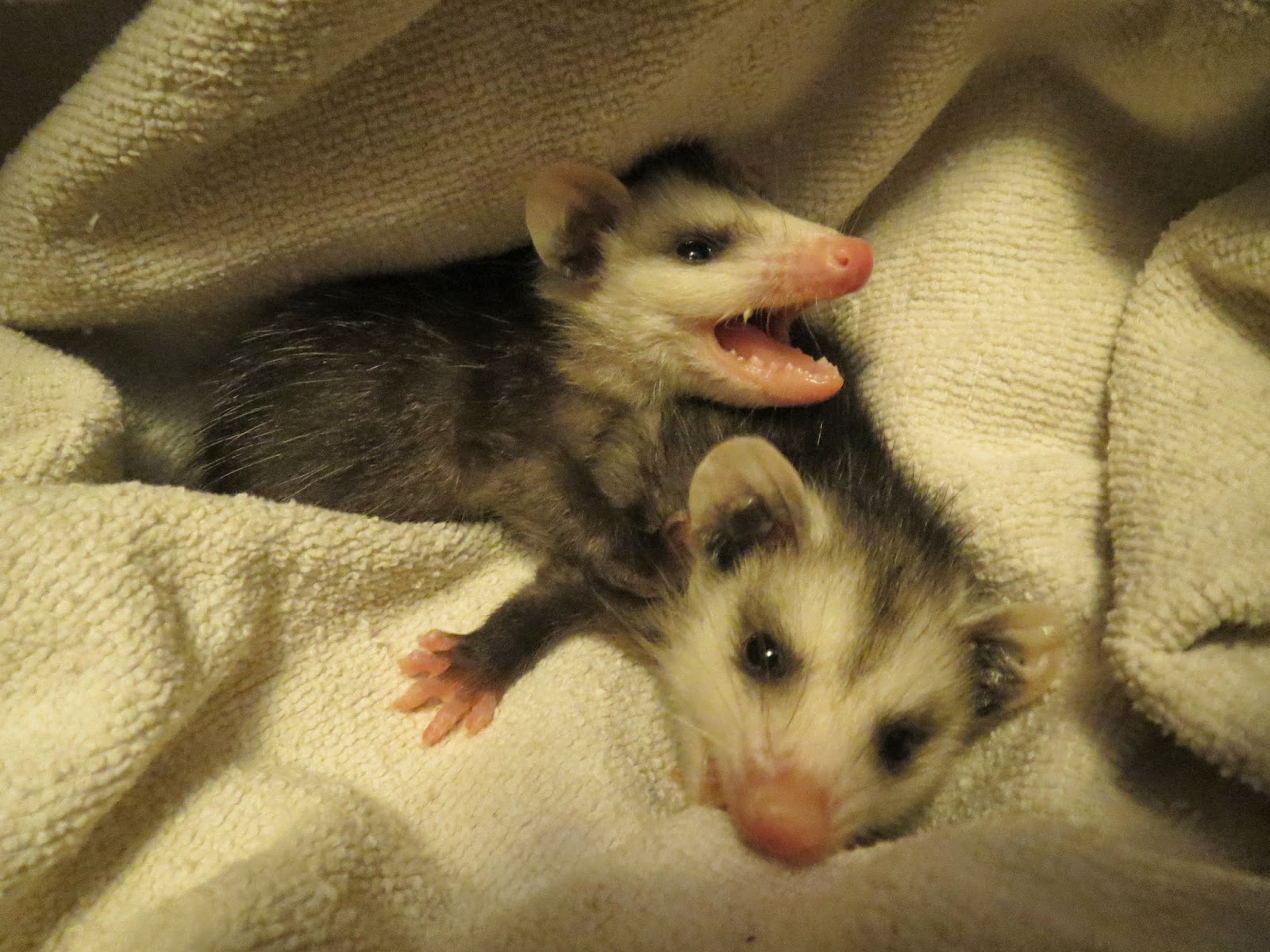 The other group is very much at the "are you my Mommy?" stage.  Couldn't get a good group picture because they were too busy trying to crawl into my hand and up my arm. 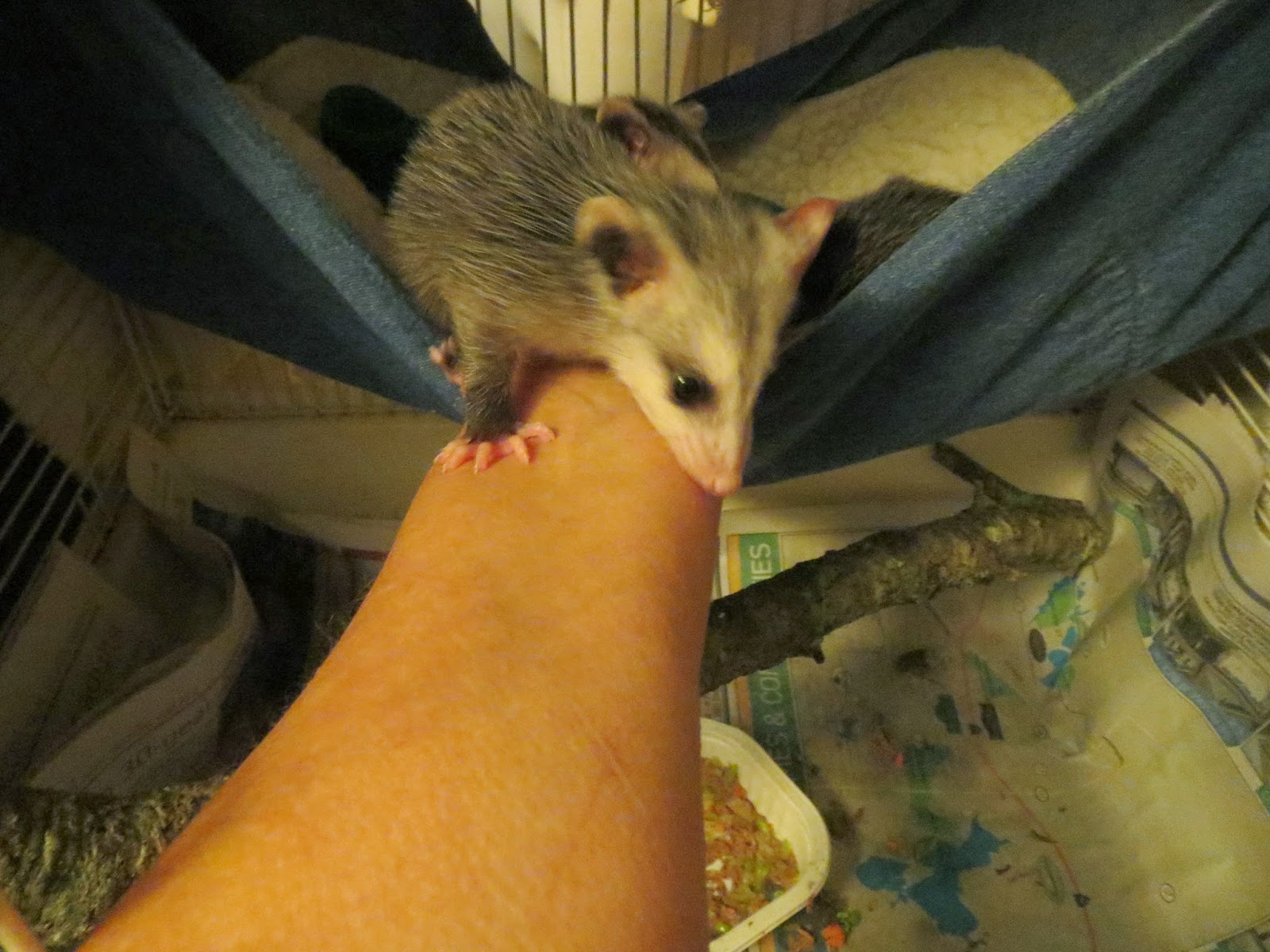 Fortunately, the second group is eating out of a dish so I only have to hand-feed the first three.  At this age they are impossibly cute.

And speaking of which--it's feeding time.

We finally got to take the kayaks out today.  The weather has been OK lately, but windy enough to raise quite a chop and we're wimpy kayakers.

We didn't take a camera out today--in one way, a pity.  But OK--I don't think we could have caught today's wonder on film anyway.  Some things you just have to experience.

We are at the height of osprey nesting season on the lake now, so are used to many ospreys flying overhead.  But today one of them was much bigger, darker, with a blinding white head and tail.  In other words: a bald eagle.  Who was chasing an osprey that was carrying a fish.  After quite a fight (oddly silent--much thrashing of wings but no screaming or smack talk) the osprey dropped the fish.  They went their separate ways for a moment--then the eagle hit the water and tried to grab the fish.  At that point, three more ospreys joined in the fracas and the eagle finally departed.

Meanwhile, back at the ranch--the Great Cottage Cleanup has continued.  No before pictures of the dye room, but here's the finished product: 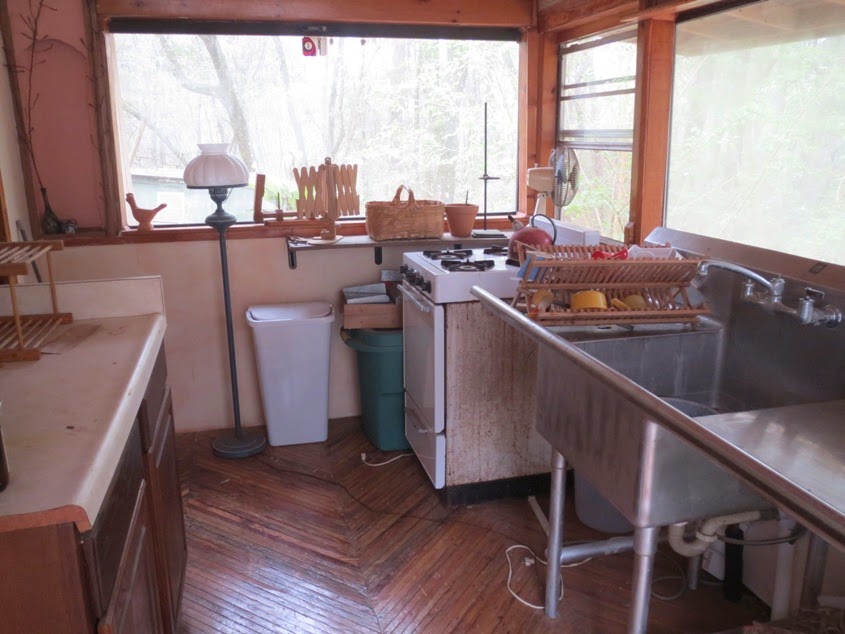 Then, last of all, I tackled the closet.  During the rest of the Mad Cleanup, anything that went in the closet just got tossed in there.  The final result was this: 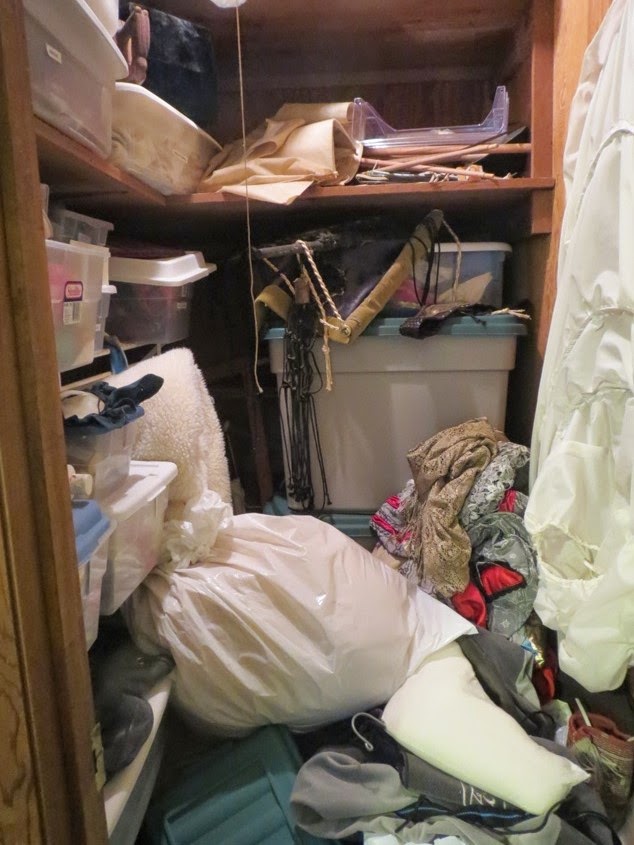 So all of that got dragged out (into my nice clean sewing room!), sorted, tossed, set aside to find new homes), and the remainder returned to proper places. 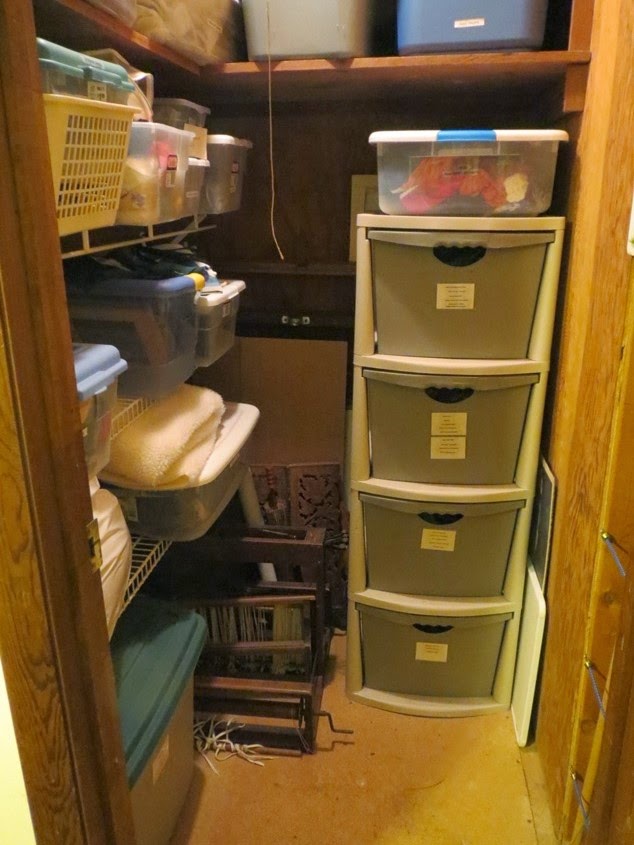 So the cottage is done!  I'm just waiting for inspiration to go make stuff and mess it up again.

Now if I could just do this to the house.  The cottage is only 400 square feet.  The house is filled with a lifetime of detritus.  Do not expect "after" pictures anytime soon.

Finally--we have a wren nest in the hanging bag meant for squirrels.  If you look closely at the second picture you can see some eggs.  Hard to believe that in about three weeks little birds will be flying from there. 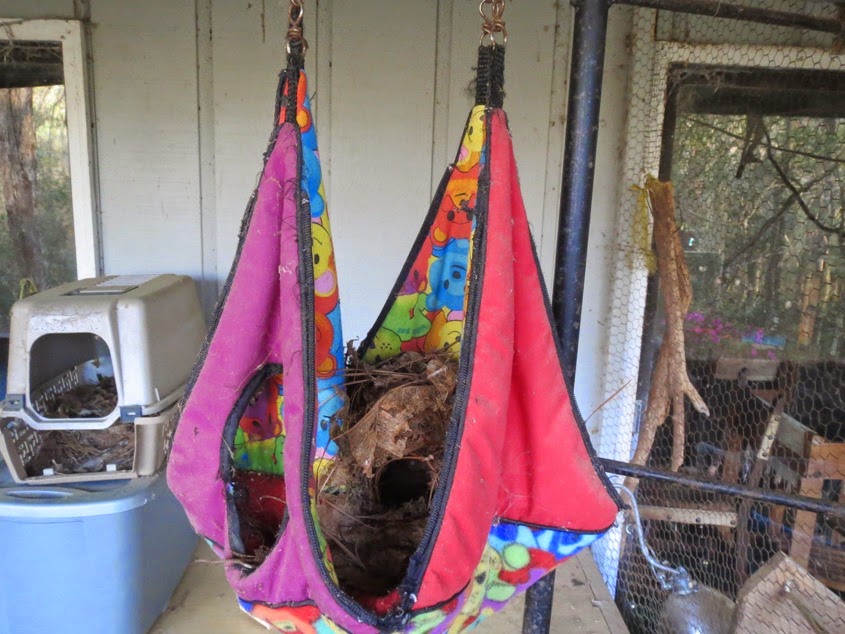 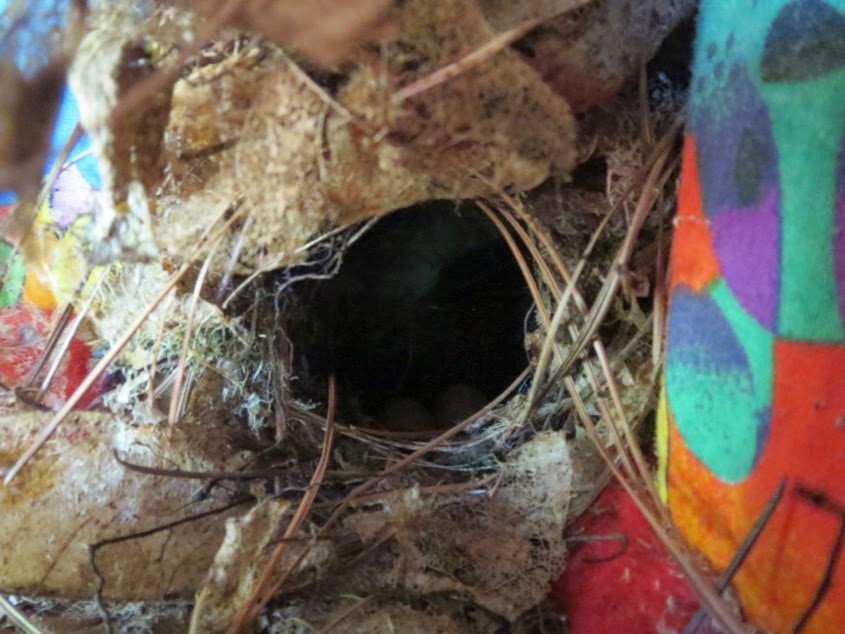