March is Nearly Over

And I'm still wearing a sweatshirt!  Off and on--some days temps are in the 80's--today it barely reached 60.

As though I haven't been busy enough with the four jobs and some other stuff--I got called up for jury duty AGAIN.  I'm one of those who get summoned about once a year.  But I've never been selected for an actual case--until now.  So I had selection last week and the case today.  It was interesting--not at all like on TV, of course.  As a jury, we ended up feeling slightly . . . used.  There was obviously a lot going on that we weren't party to.  This was a criminal case, the State of Florida vs. "X".   What he had done was get mad and kick in a door--damages of $140.  No theft, didn't injure anyone.  Pretty cut and dried because he admitted that he kicked the door (but didn't mean to damage it).  Shouldn't this have been a civil case in a small claims court?  Seems a little fishy.

OK--the other stuff.  Early March we had the annual Camp Gordon Johnson parade down in Carabelle. Gordon Johnson was a training camp during WWII.   We've been doing this one for many years.  Rather poignantly, we see that the turnout is getting smaller each year.  There aren't many WWII veterans in the parade anymore.  That war as a long time ago now, and memory fades.  The three "Andrew Sisters" who rode with us were playing and singing "Boogie Woogie Bugle Boy" but they had never heard of Rosie the Riveter. 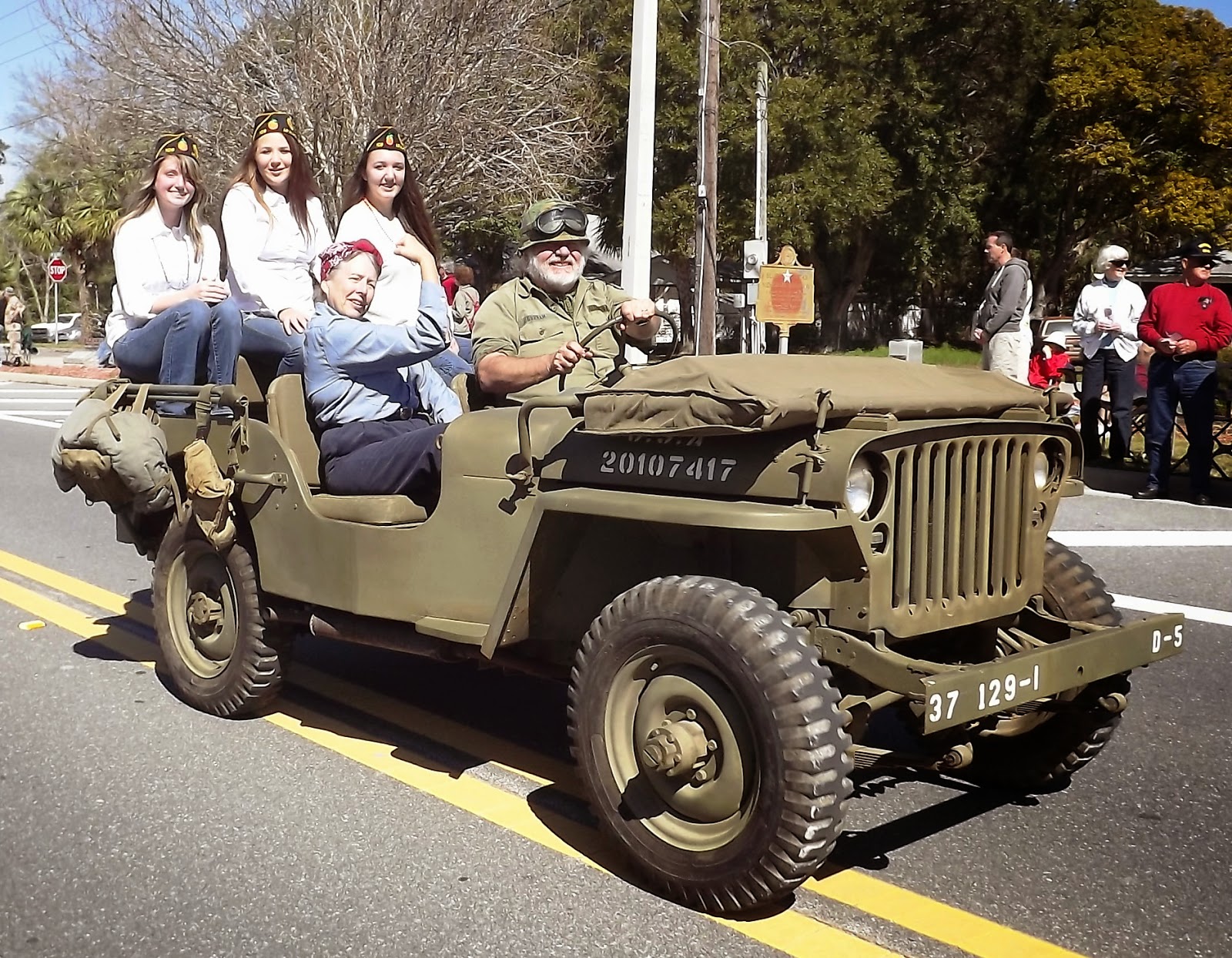 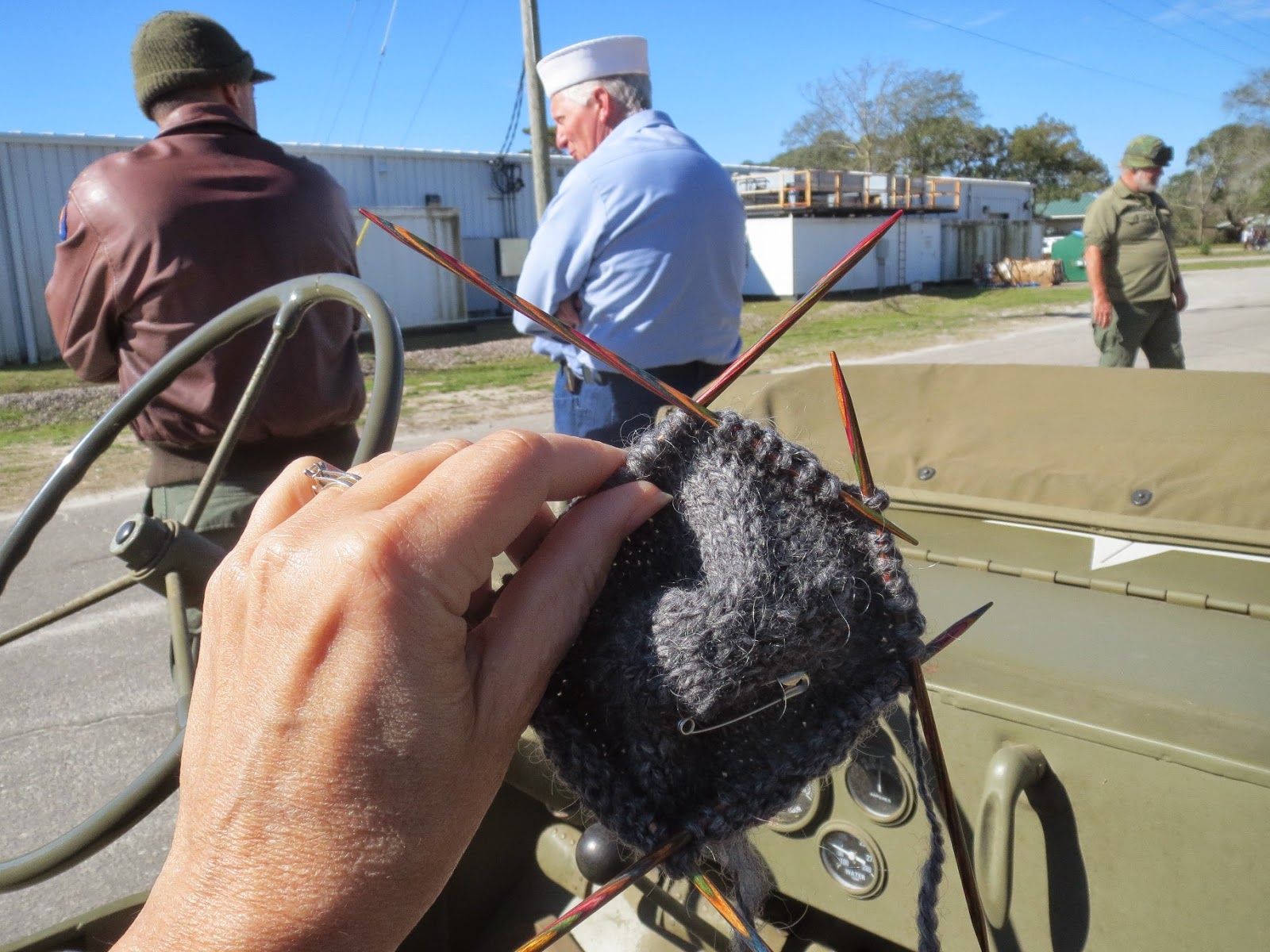 The next week was spring break--not that the FSU staff get time off--but it's a good time for another hooky day to head down to St. Marks for some hiking, bird watching, and . . . more knitting.  We met a couple from Maine who travel with their cockatoo (who didn't want anything to do with me but happily marched up and down Bob's arm) 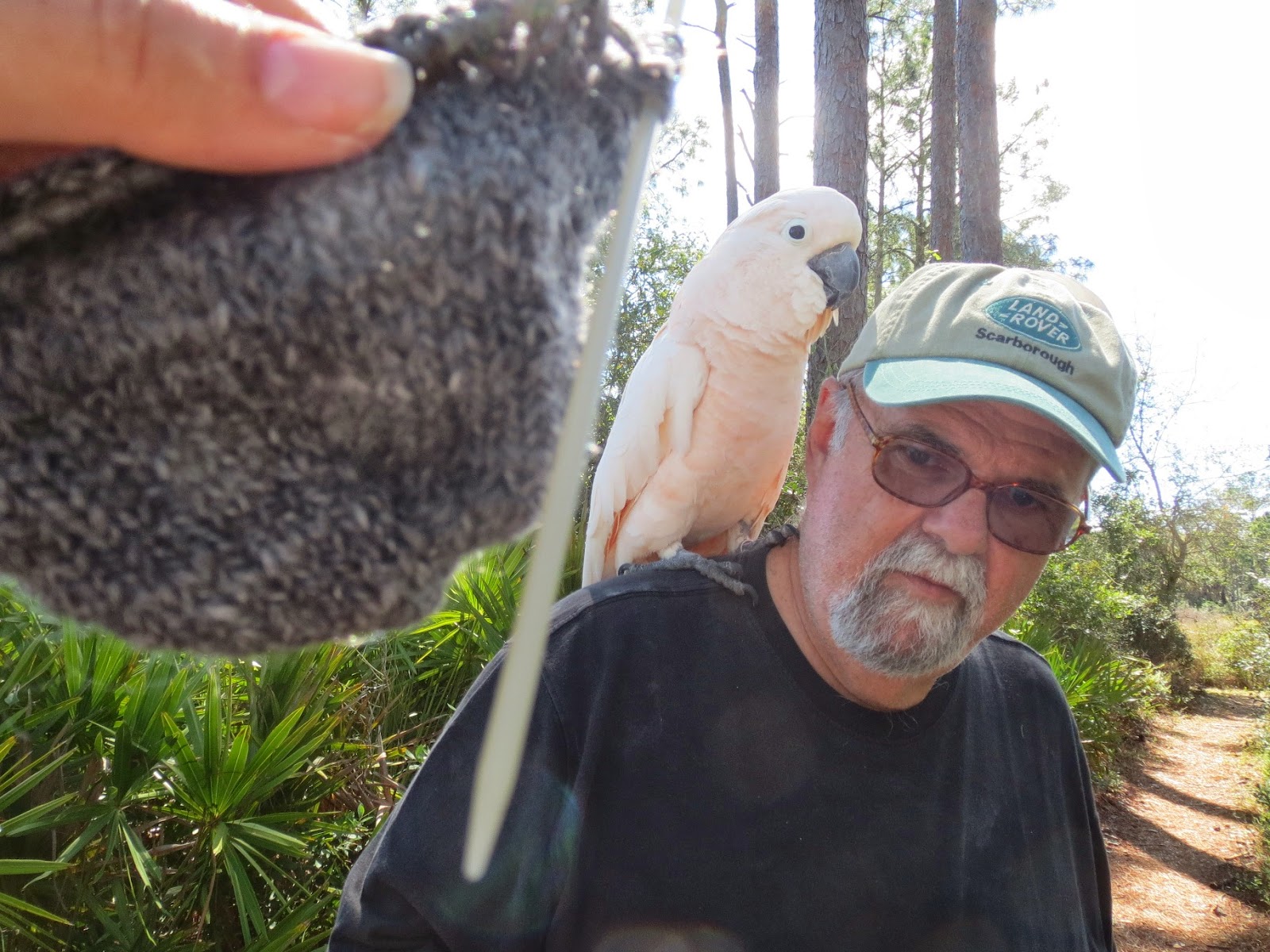 Off to Outz's oyster bar for lunch.  I had a picture of the outside a few posts ago.  This time I remembered to take the camera in to show the décor--apparently it's a tradition to sign a dollar bill and stick it on the wall.  If they ever run short for the rent they can just peel off the wallpaper. 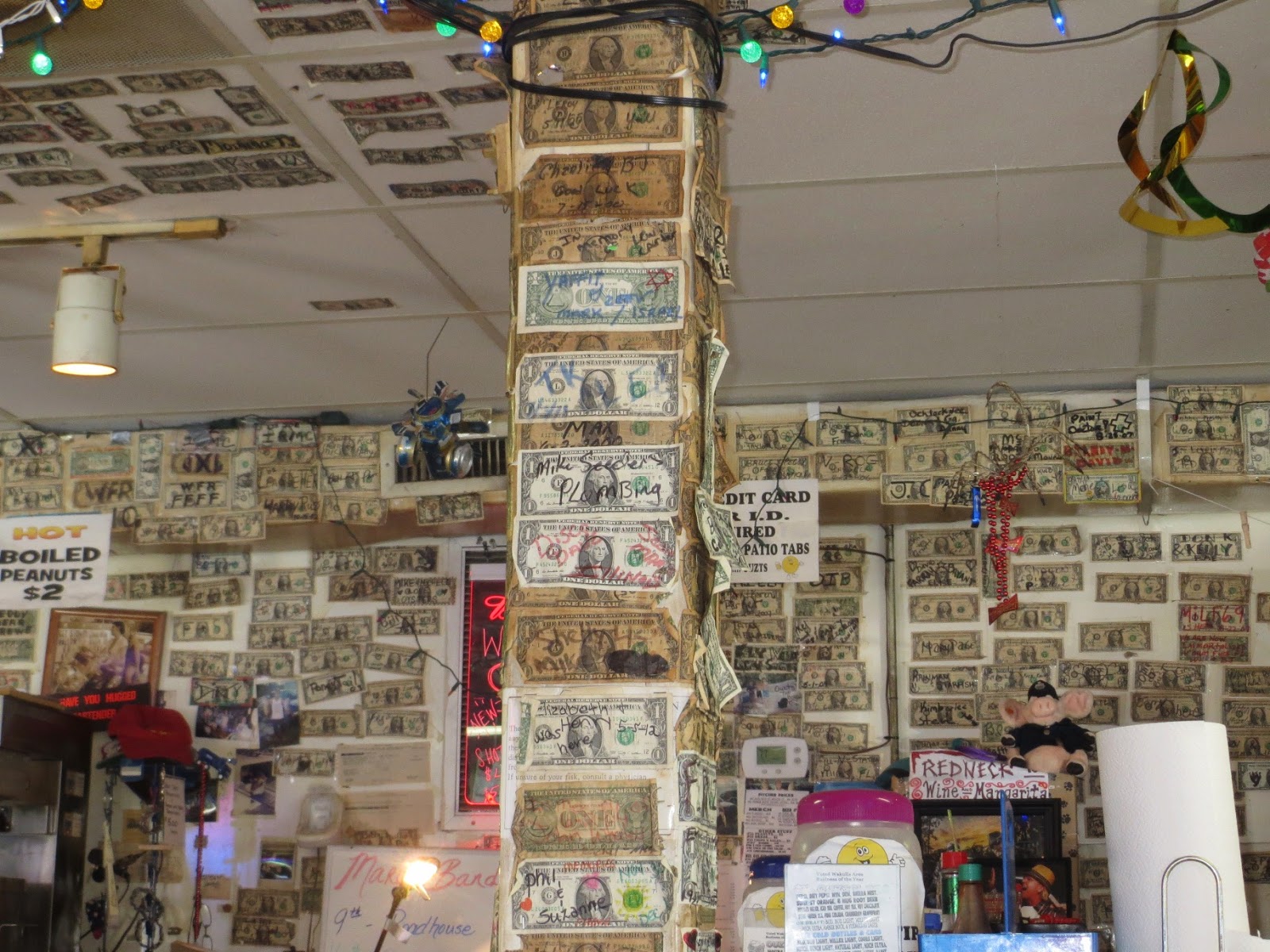 We also got the garden patio project finished.  All the flagstones are down and sanded in, and we even got an umbrella and table so we can take a break from gardening in style. 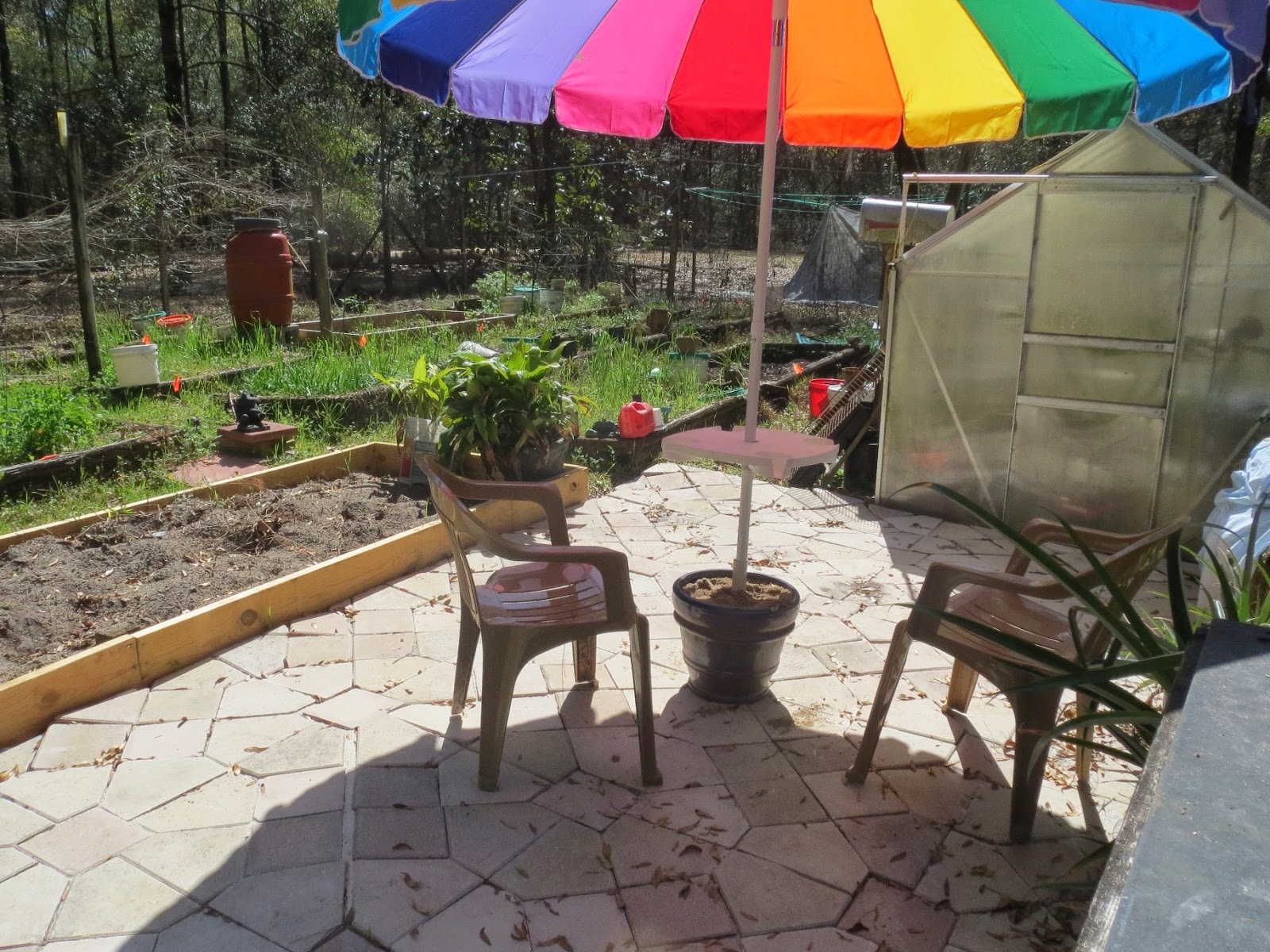 Now the reason that my poor brother's cold feet don't yet have his handspun, handknit socks (although I have given proof they are in progress) is that I took on yet another major project.  For the theatre's production of Spamalot I wove those crazy shoulder mantles.  The next show is Dangerous Liaisons, which is as sumptuous as Spamalot was silly.  The designer wished for an elaborate black lace shawl--and, being myself, I told her *of course* I could knit one.  I've knit lots of fancy shawls--not that I wear them much, but they're fun to make.  Did I once remind myself that I usually take about 3 months to make one, and I had one month?  So I had to be a knittin' fool--and I got it done (in the nick of time--the day before the dress parade, where the director gets to see the costumes, and four days before dress rehearsal).  And, if I modestly say so myself, it's impressive.   As usual, I have to show a picture of it fresh off the needles because knit lace looks so sad when it's freshly knitted--rather like old cheesecloth.  It's needs to be washed and seriously stretched before it looks glorious.  Maybe that's why I like knitting it--the final finishing is just rather magical.
﻿
﻿
﻿ 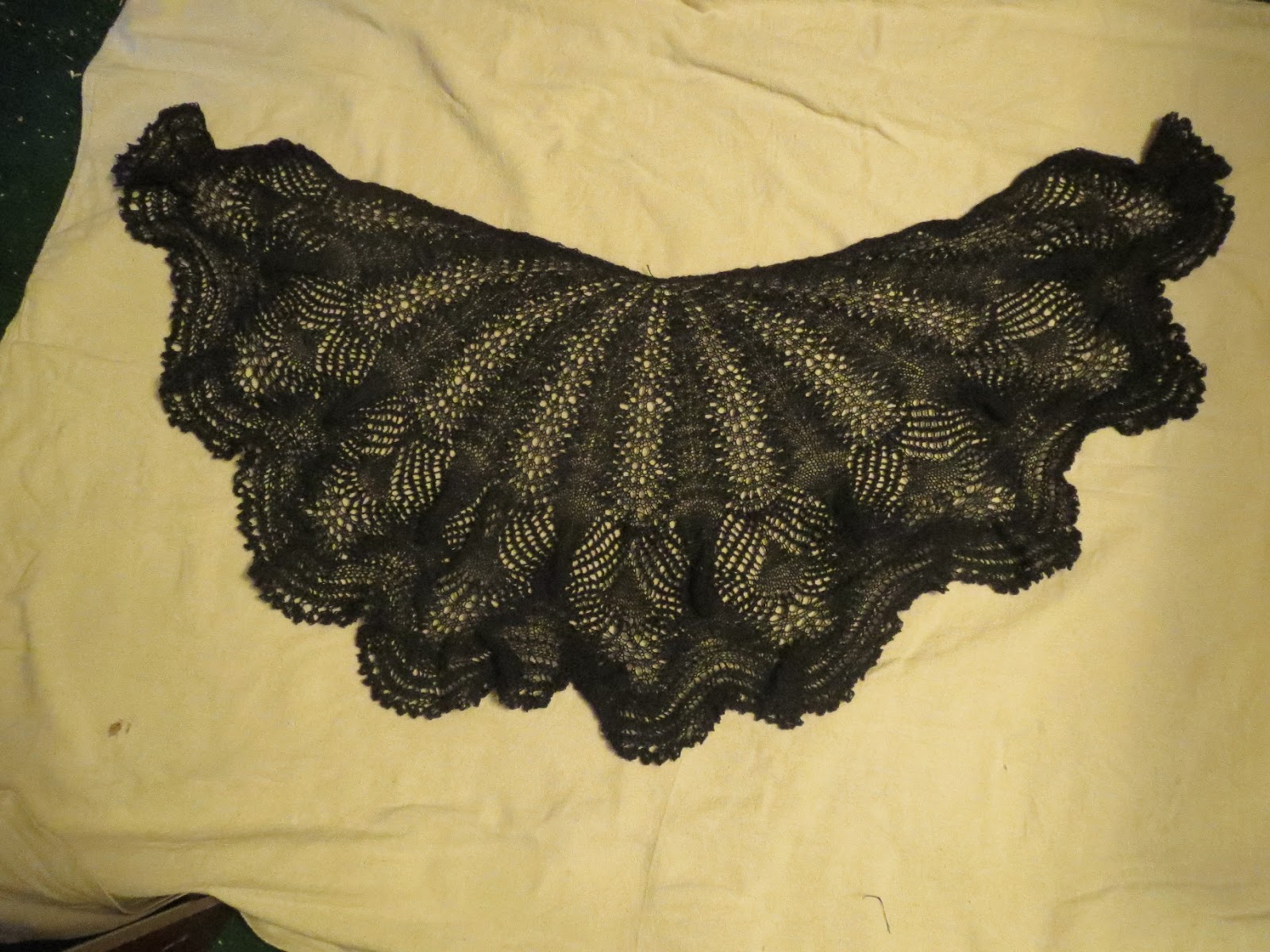 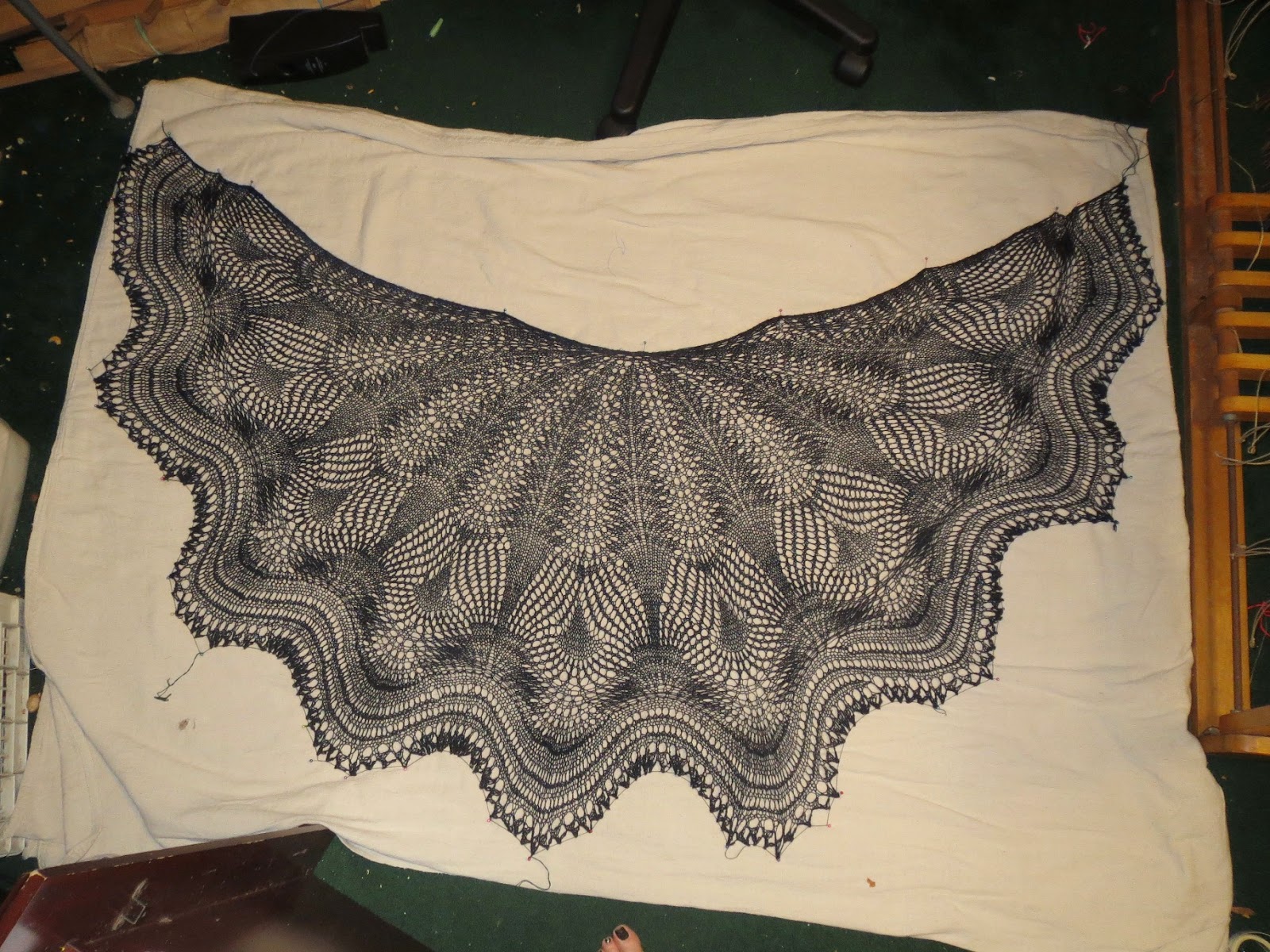 The big compliment came second hand--I was told that when the director was reviewing the costumes and saw the shawl, he commented that he would have to be sure that the actress turned her back to the audience so it could be seen.  *Blush*
[note:  unlike the crazy shoulder panels, when the show is over I get this back!]
We have some new additions to our little family.  One of the hens has gone broody, and we didn't want to let her hatch eggs because there's a 50% chance that you'll get little roosters.  So we bought her some chicks from the feed store.  At least that was the plan.  Unlike another hen in the same situation a couple of years ago, who was a bit confused but quickly adopted the proffered chicks, this hen wanted nothing to do with them.  So now I'm being a chickie-momma.   Not that I mind--such cute little fluffballs. 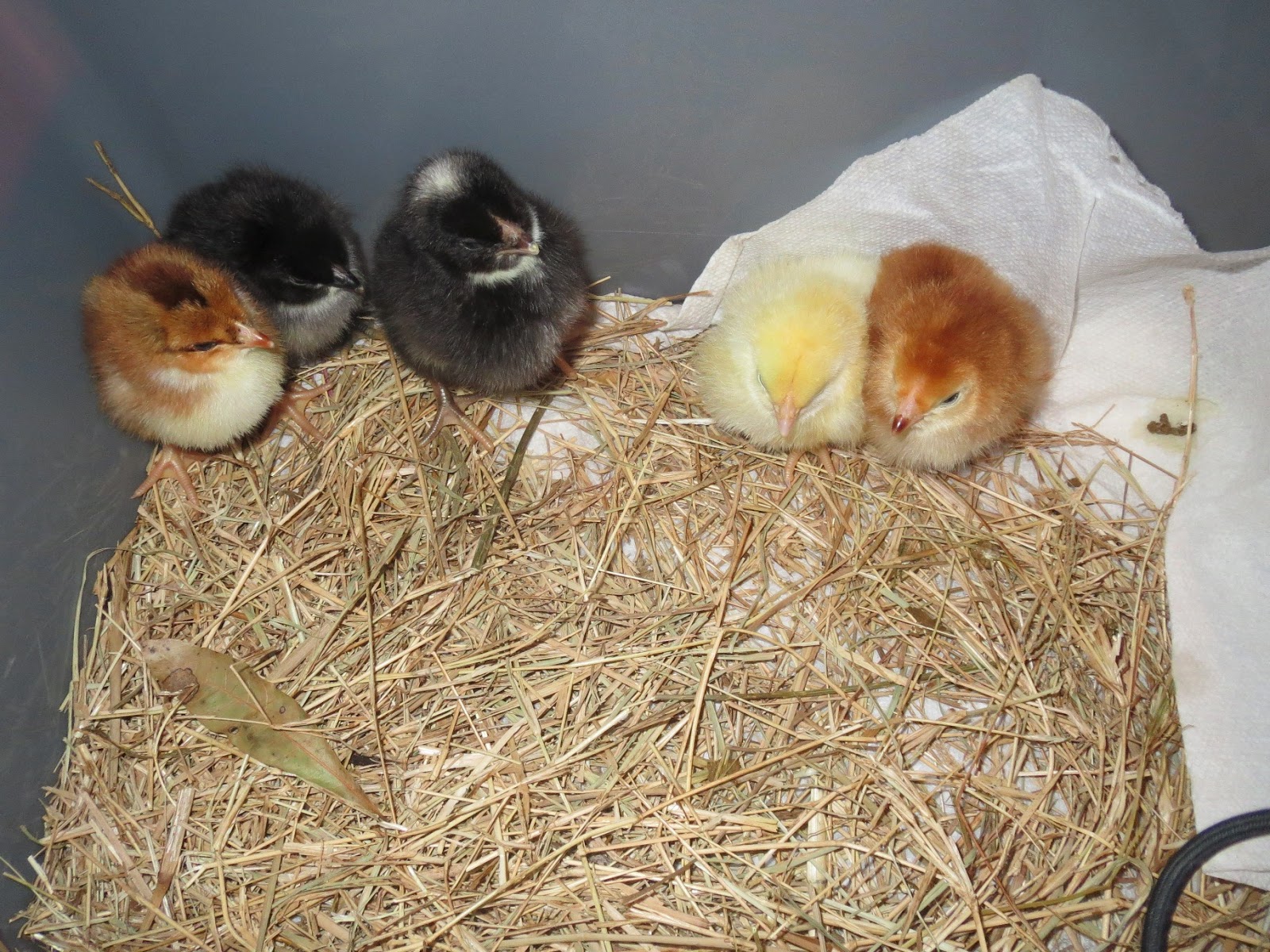 And because Margo complains if I go too long without a cat picture, here's Nazgul.  He was a skinny shy feral who disappeared if we looked at him a few years ago.  Now he's decided that he enjoys the creature comforts of being An Owned Cat. 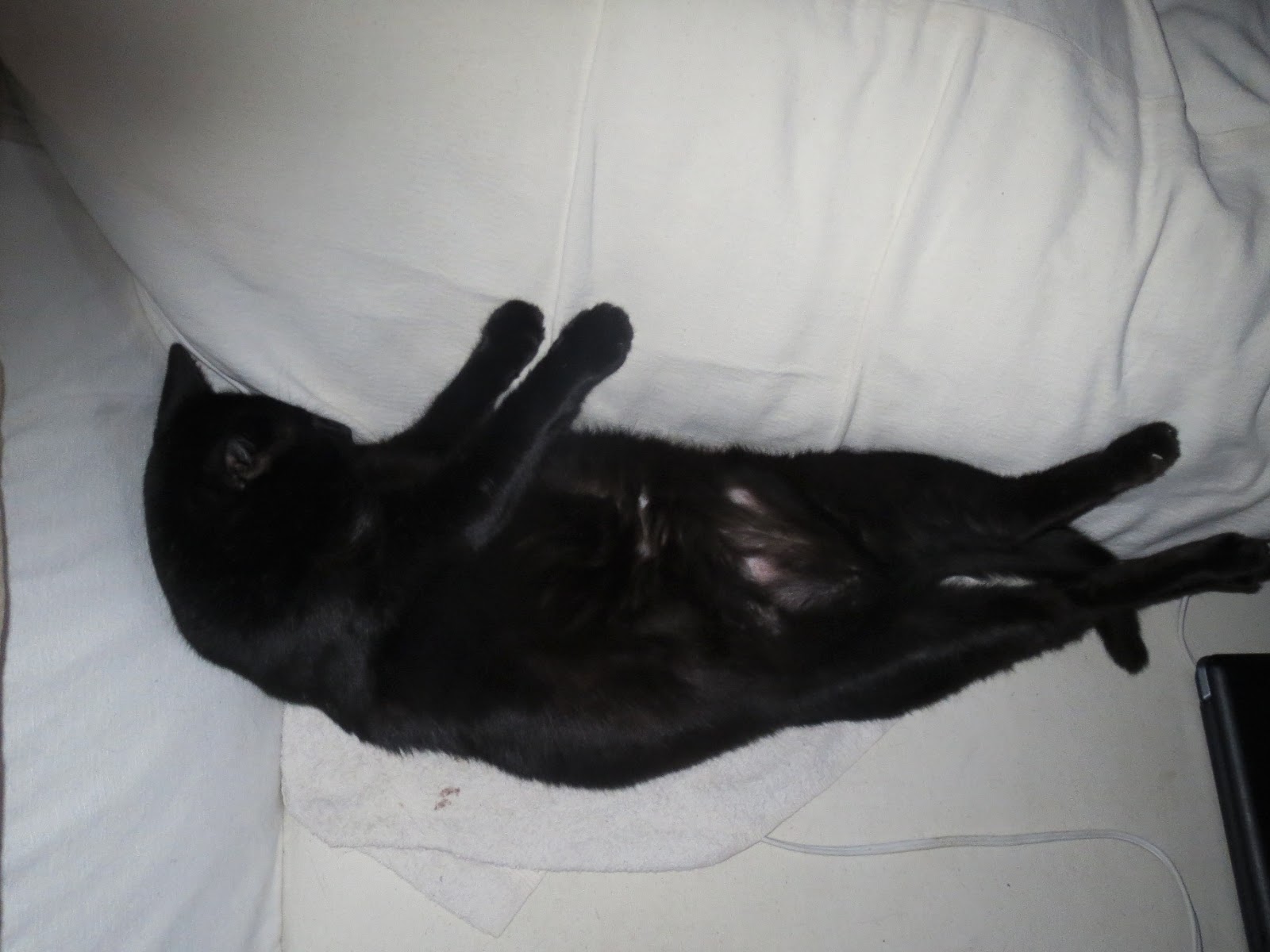 And I shall end with a ray of hope to those of you who live north of Florida:  Hang in there, everyone.  Spring is coming! 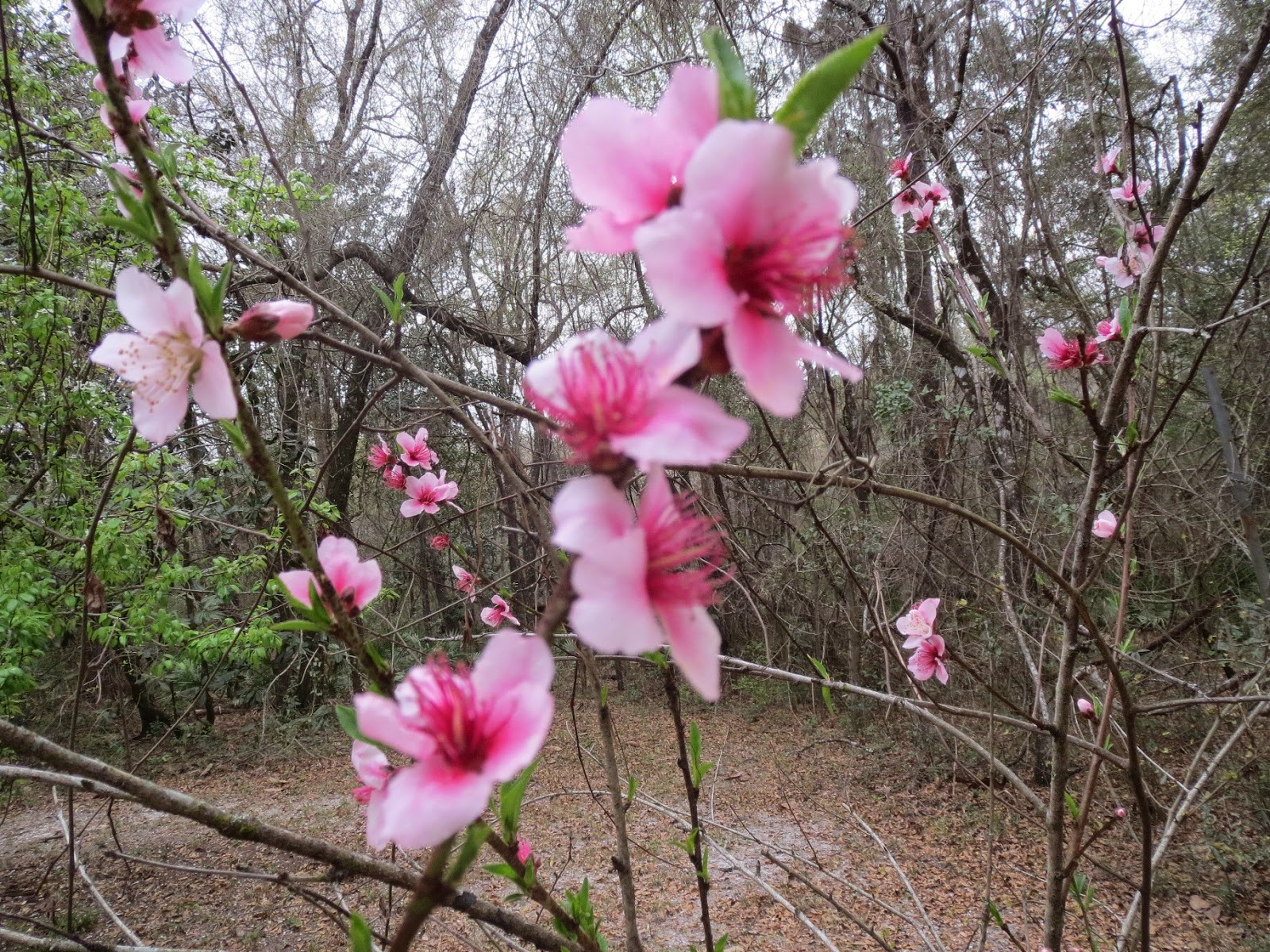 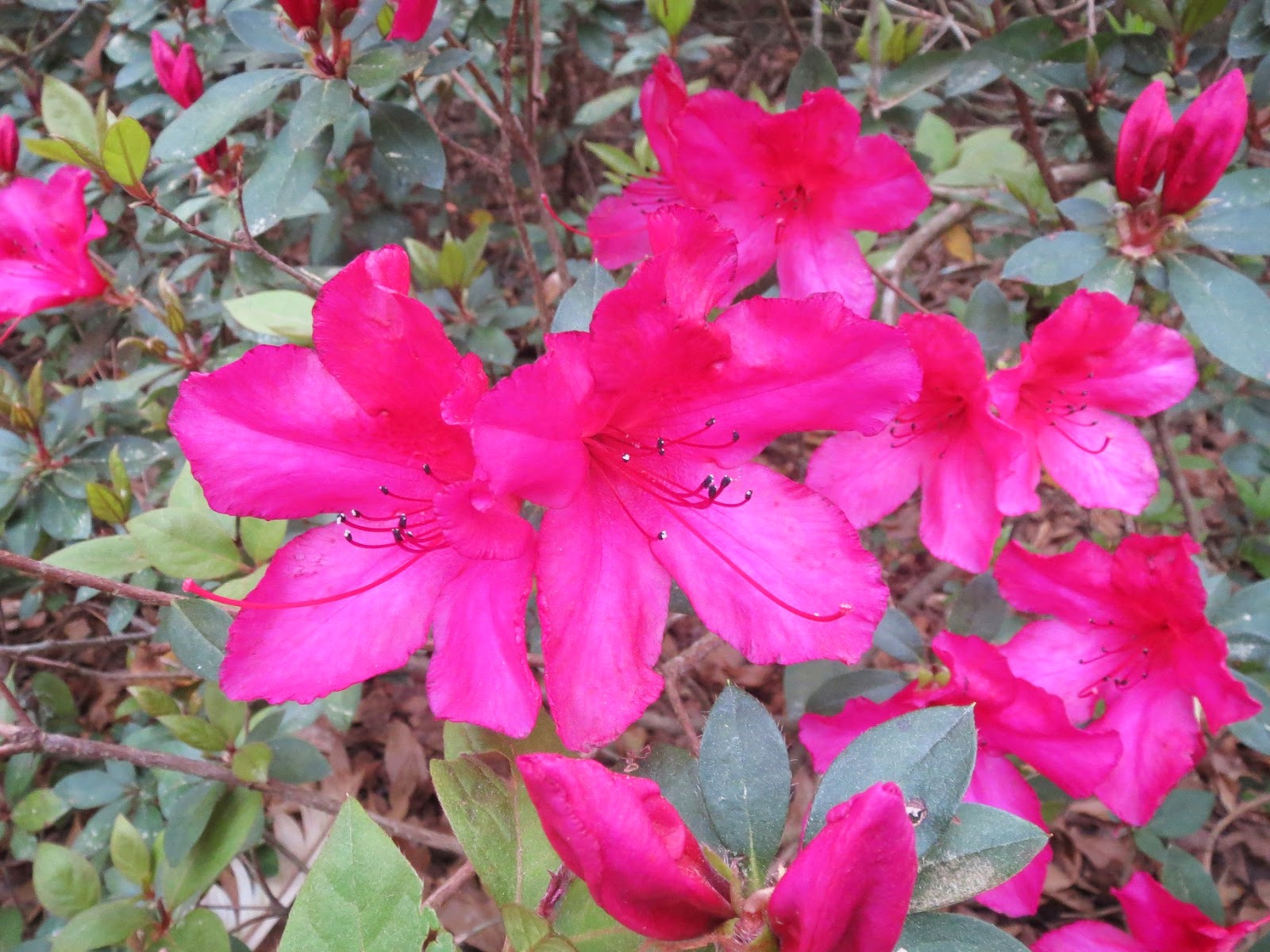 Ah, the magic of Theatre.

Sometime in January I posted a picture of a sleeve that I knitted out of nylon cord.  Here it is again. 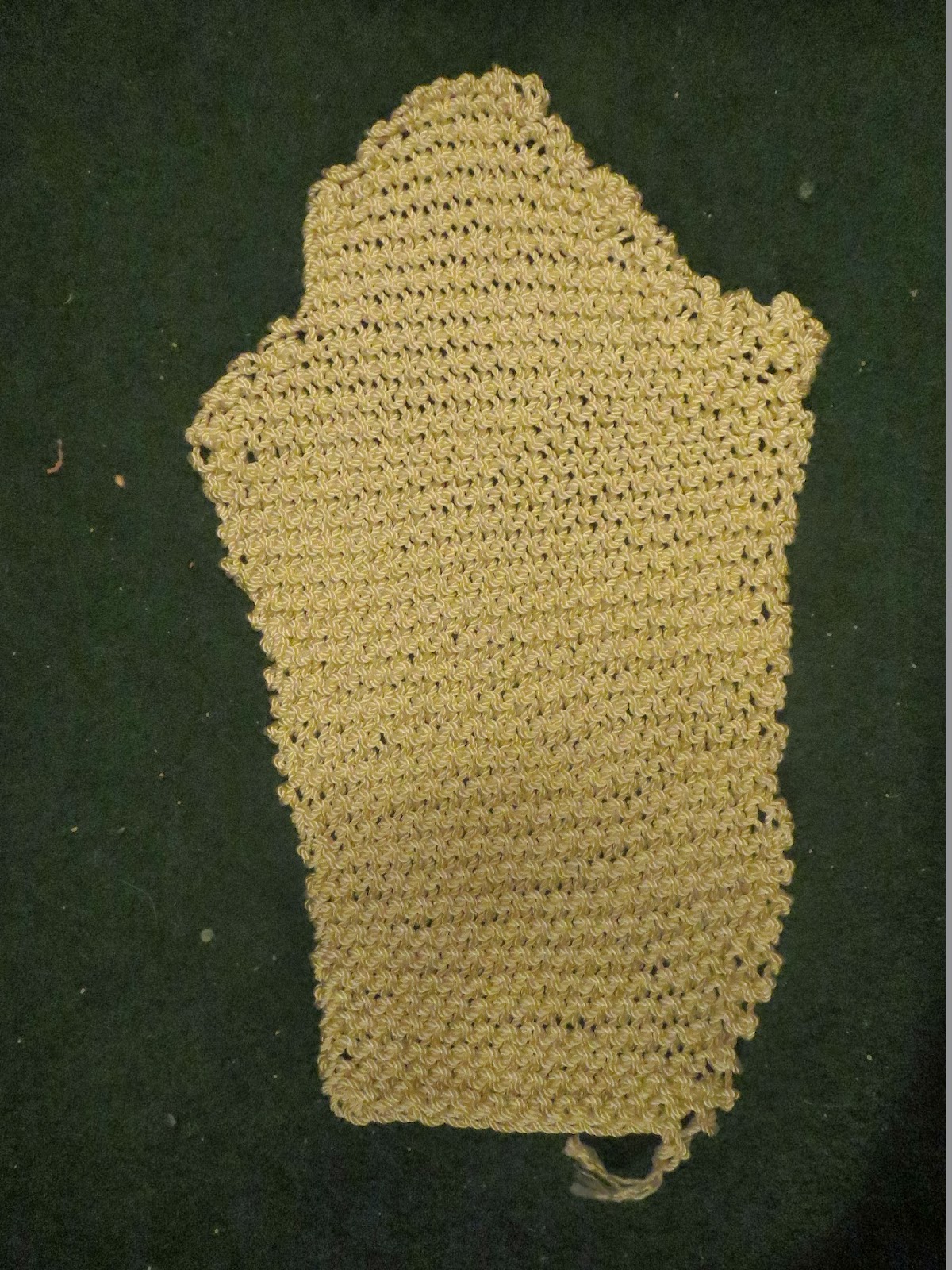 Not particularly impressive, I admit.  Even though it was more difficult to knit than it looks--heavy cord on big needles are just more work than my normal knitting.  All in all, I did four of these, and two shoulder panels.  A lot of work for something that doesn't look like much.
But dye them, and gild them, make them part of a costume, and put them under stage lights--and they look pretty good. 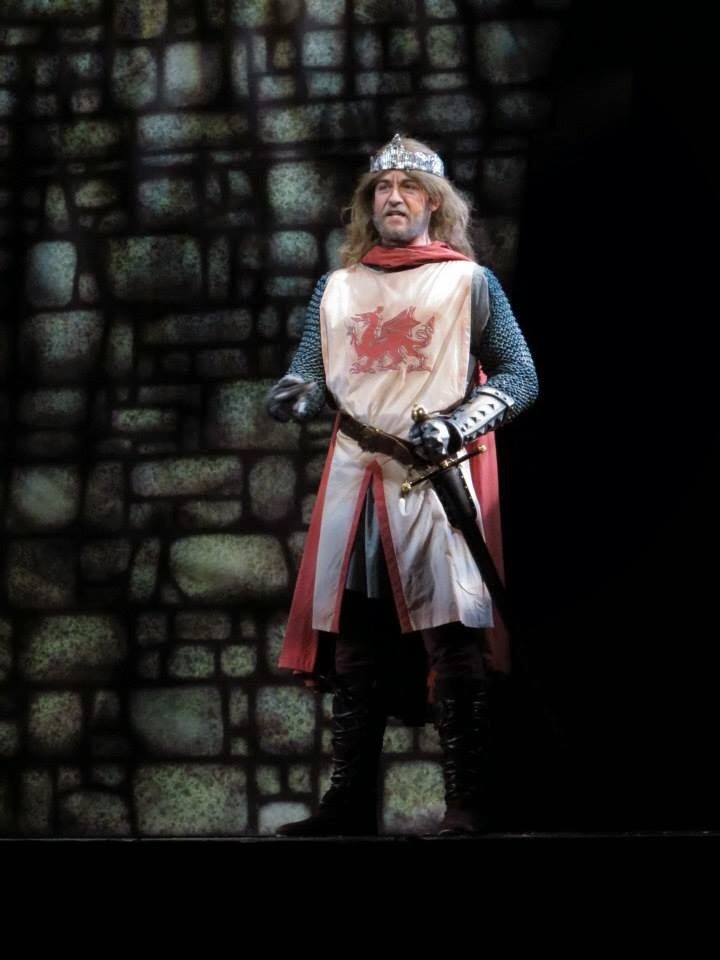 ﻿
﻿
Likewise, here's my strange shaggy shoulder panels.  I did exaggerate when I said that after all my work they'd be on stage for all of 15 minutes.  It was more like five.  That's theatre for you.  (But don't they look good?) 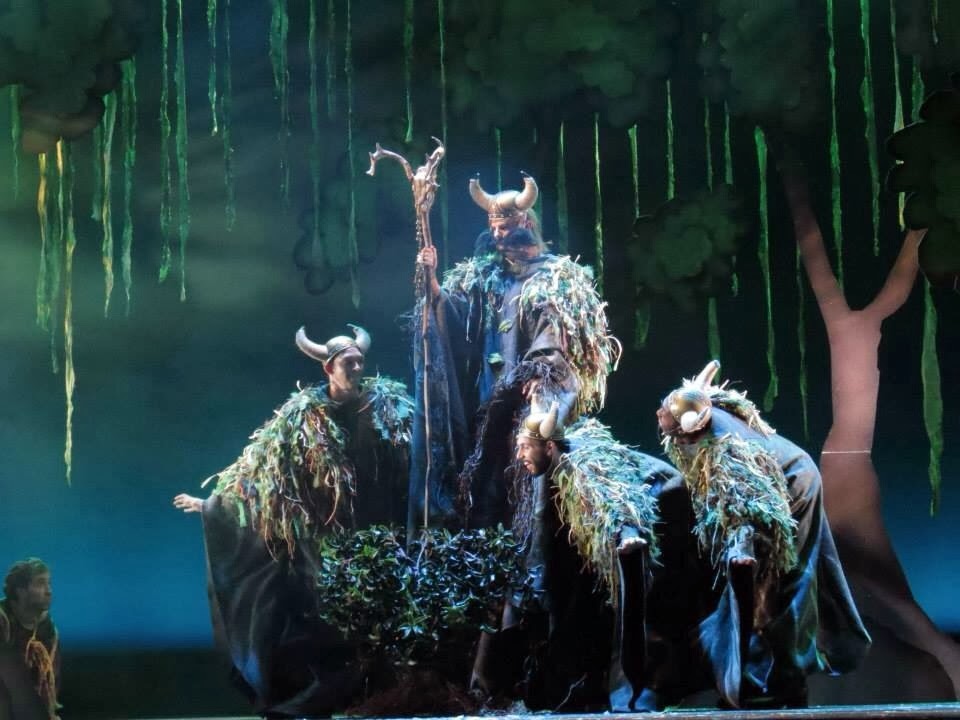 
Back at the costume shop, I was watching one of the designers working with a beautiful piece of color-changing taffeta in a gorgeous bronze-green color.  I remarked that it looked like a wet peacock.  I got strange looks.   I guess not many people have seen a peacock in the rain--their feathers get plastered down and take on a bronze/green hue instead of the usual peacock blue/turquoise.   So the next time it rained I took a closeup of a bird's back. 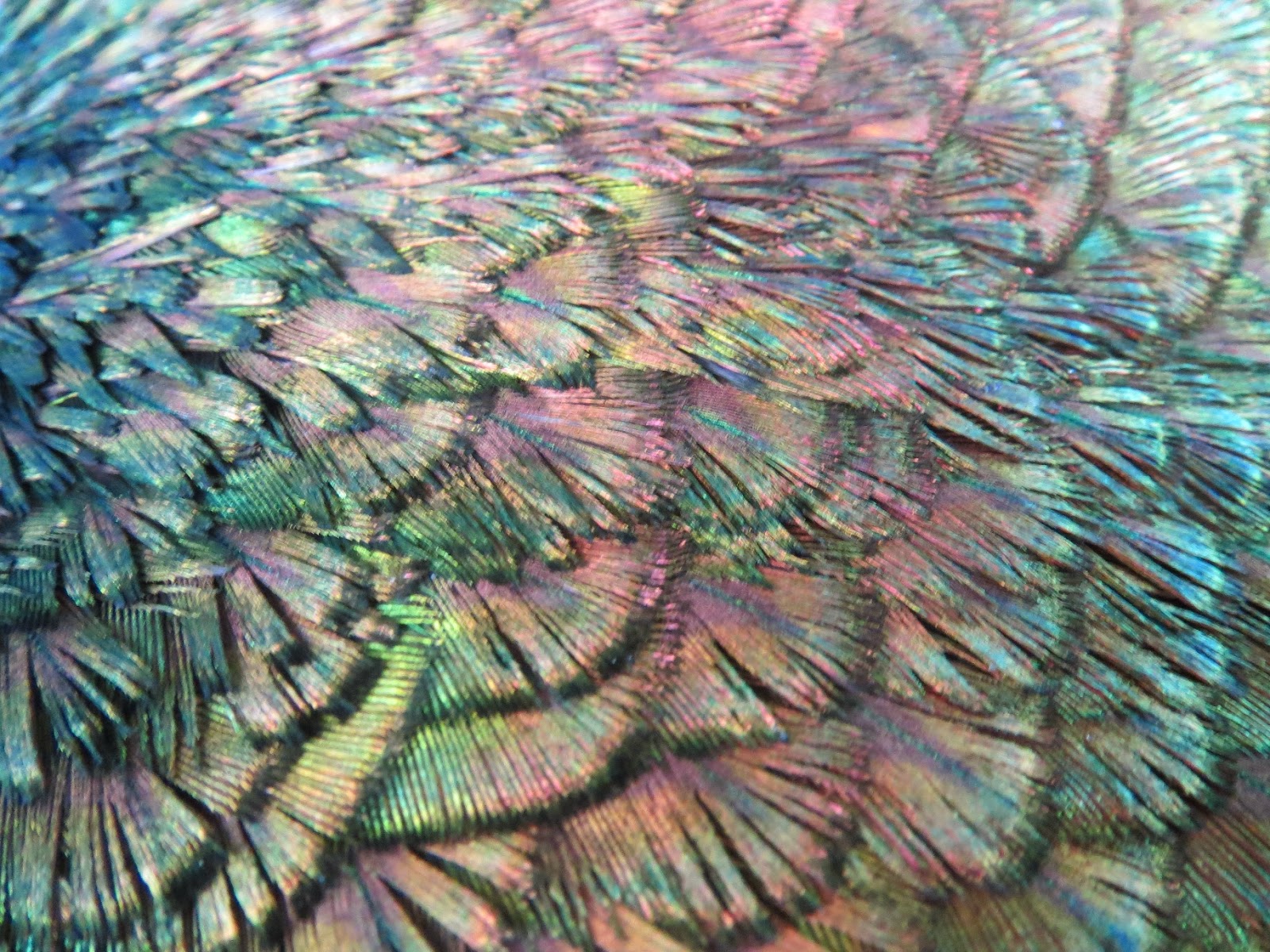