There's something about the spring that makes one want to do, well, spring cleaning.  Maybe it's the clear skies, the longer days, or just all the flowers blooming that makes freshening up seem like a good idea.

I started with my closet.  I actually don't have that many clothes so it didn't take long.  I just pulled everything out one by one, checked to see if it fit, and if it didn't, into the Goodwill bag it went.  Well, almost.  I did keep a couple of "5 pound" skirts that I really like, and will be able to wear again if I lose maybe five pounds.  But just two of them.  Otherwise having a closet of clothes that you need to lose weight to wear is just depressing.

Then came my handspindles (the ones I use for spinning yarn).  They have lived in a basket on a side table.  Sort of all jumbled together so I have to dig for the ones I want.  And sometimes the cats knock it over.  We were in an outlet store and I spotted a quarter-round wire bathroom rack--so I bought two of them, put them together with zip ties, and hung them on the wall.  My less-interesting spindles (the ones I use for teaching) went into storage and my nice ones went into the rack.  Done. 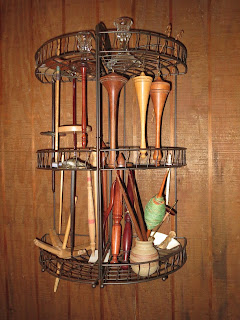 The project for the last two days was slightly more involved.  There's a hallway in the house where we hang pictures.  I was sort of tired of some of them, but moving and rehanging seems like a bit of a bother.  There's a display system that I've seen from time to time and really liked, and we decided to put it in.  Basically, you make a shelf with a lip and rest your pictures on it.  You can even stack them--a look I rather like.  And rearranging them is easy.  Here's where we started: 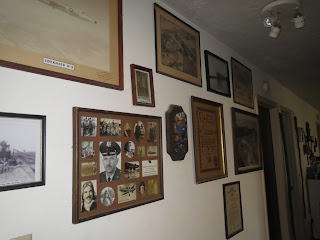 It seemed simple enough.  Build a couple of shelves with lips.  Take down the pictures.  Put up the shelves.  Put back pictures.

Shelve building--check.  Take down pictures . . . . wow.  The reason we didn't have much problems with the pictures going askew was that many generations of spiders have glued them to the wall with webs.  So I had to evict the living spiders and clean out the webs.  The wall looked a little grungy so I had to wash it. Then the baseboards looked grungy so out came the steam cleaner and toothbrush.  And when you live with something day to day, you don't really see it any more--so I had never noticed the little pyramids of dust on each picture frame, so they all had to be cleaned.

And now that this wall was clean, the other side of the hallway looked grungy--so those pictures came off and were dusted and those walls and baseboards washed.

I have often mentioned that I lack the "clean gene."  Some people can clean their houses and they have, well, a clean house.  Anytime I clean I just uncover more dirt.

But at last, the shelves went up and the pictures (with some changing) went on, and yes, indeed, it is a look that we like.  There are a few more pictures to go up as soon as I print and frame them. 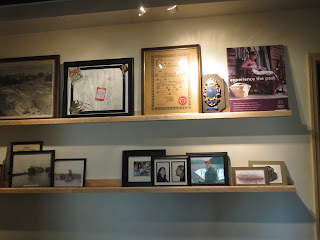 Winter is [not] Coming

Living in Florida as we do, we love winter.  Granted, we don't have "winter" the way a lot of people have WINTER.  Winter to us is the season where we don't sweat quite so much and can be outside without getting drippy and bug chewed.

The rest of the year we use the magical and wistful term "come winter."  Come winter--we'll hike and kayak more.  Come winter, I'll cook soups and stews.  Come winter, we'll sit in front of the fire and drink cocoa and read.  Come winter we'll finish cutting down that fallen tree and burn the branches and cook hot dogs over the fire.  Come winter I can drag out all those handspun scarves and hats and wear them.  Come winter . . .

Winter is that long-lost love that shows up in town for a few short weeks every year.  You relish your time together before it is gone.

Only we find that we are still saying that when it looks like this outside. 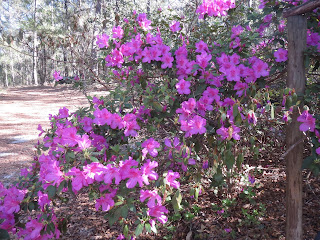 You know those old romance movies where the two lovers meet every year--and then one year one of them doesn't show up?  We're feeling jilted.  We had a couple of cold snaps (and one really cold day) and that was pretty much it.  I got out *one* sweatsuit.  One scarf.  Never wore my gloves.  I'm not sure that we ever had a whole week that the temperature didn't reach 80.

It's the winter that didn't happen.  We feel cheated.

For stay-at-homes, we've been doing *way* too much driving lately, especially on weekends.

At the end of January was a gun show--at least that was local.  Guns are Bob's thing, so I usually don't go.  But this time he asked me to go along.  I eventually figured it out--there are 4-5 gun shows a year, and he goes to all of them, and every time he comes home and says "I almost bought a new .45--but they're really expensive.  It sure was nice."  What he wanted was for someone to say "So go ahead and buy the damned thing."  So I did, and he did.  He has a couple of .45s, but they're old--as in nudging 100 years old.

But watching it be sold to him was interesting.  He was looking at one of the tables of guns--the guns are covered with a large piece of nylon net, which allows customers to see them without being able to casually pick them up.  It was a family-owned business, and a little girl of about 8 or 9 years old came over to him, and in her lisping little-girl voice said "May I help you sir?"  Bob said that he was looking for a .45 acp (and there was some other stuff but it's so much wah wah wah) to me.  She listened carefully, reached under the net, and handed one to him, explaining the features.  She showed him a couple of others, shooing off her sister who came over to help.  The wee munchkin really knew her stuff and successfully made the sale.  (no pictures--I'm no sure how I feel about posting a picture of someone's little girl holding a honkin' big gun).  But I did compliment the mother on her daughters (turns out that the 13-year-old is a licensed shooting instructor).  But *that's* how to raise kids--to be competent, confident, and contributing members to the family.

I did buy myself a little gift--for some reason I was taken with this small hand-forged knife (it's about 4" long).  The blade was made from a recycled coil spring from a car.  What I like is what might be considered a flaw--the rough inclusions at the top of the blade.  But to me it's like the sculptors who leave a bit of unhewn stone in their statues--something that shows the history of the piece.  (it lives in the kitchen now as a super-sharp paring knife) 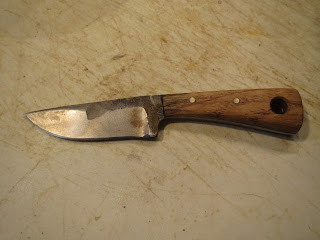 Last weekend was a drive to Gainesville to go to the Renaissance Faire (again--I wrote about it last year).  I don't know why Tallahassee doesn't have anything like this.  We did, years ago, (a Celtic festival, a Colonial Faire) but they've all faded away so now it takes a 3 hour road trip.  Ren Faires are fun--lots of people in costume, some amazing, others--well, the people enjoy wearing them, but it makes you think of a kid wearing a bathtowel for a cape and thinking he looks like superman).  Lots of shows and acts.  One amazing one that culminated with the acrobat bouncing on a huge pogo stick, then doing a backflip off of it over a fireball (which he blew from his mouth as he jumped).  Pretty impressive.  Made me think of a ren fair a few decades back, when Bob and I sat on similar benches in front of a similar small stage, watching two young juggler/magicians.  One was tall and loud and obnoxious, the other completely silent.  They were quite good.  Wonder if now, all these years later, I could get a front row seat at a Penn and Teller show for a dollar tip?
And, of course, where else could you buy a wench costume or a suit of armor, or watch someone make glass figures (which didn't really interest me, but I loved his dragon blowtorch), or get a hug from a sweaty knight? 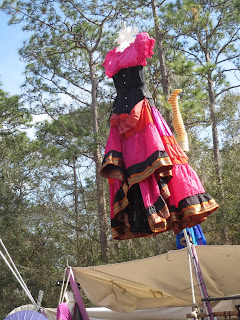 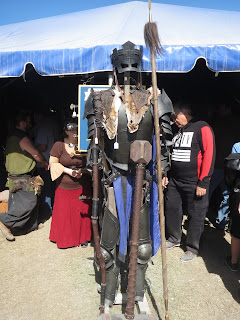 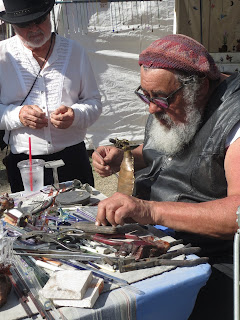 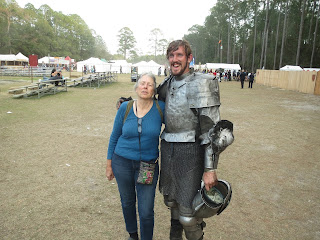 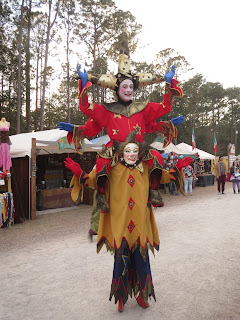 Finally, yesterday we went to Jacksonville (another 3 hours away) for Jax Con, a scale-model making conference.  We wanted to be there by a bit after 9 so Bob could submit his models (in addition to his usual tanks and jeeps he had a Triceratops and a scratch built spaceship) and go shopping before things got picked over.  He also took a bunch of model kits (that he knew he would never build) to sell.  I have to admit to having a bit of a sinking sensation after getting up that early and driving that far and helping him carry stuff in when by 11:00 he had submitted and shopped and was pretty well finished.  Problem is--the judging wouldn't be over and the winners announced until 5:00.  I smiled bravely, pulled out my knitting, and manned his sales table.  After all, he puts up with my stuff . . . . 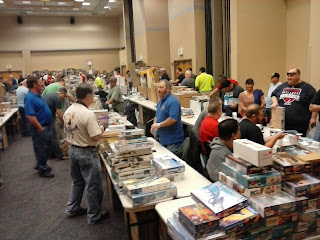 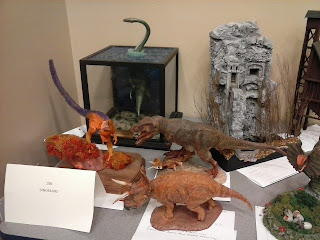 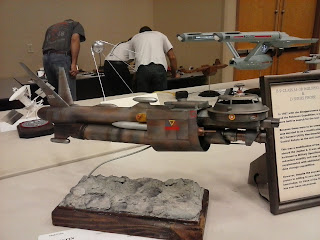 (Besides, his model-making friends are a nice group and I enjoyed chatting with them)

Finished "Prehistoric Textiles" and am now on "Woven Into The Earth" about early Norse textiles.  The poetic title refers to the tree roots that have grown into the graves and woven the grave goods and remains into the earth.

Barbara Kingsolver, Small Wonder.  A collection of essays.  I've read a couple of her books (she writes about self-sufficiency and living lightly on the earth) and I like her writing style, but this one has been a bit of a slog.  A lot of the essays are about social consciousness (yes, good, but not particularly light reading) and the ones on the beauties of the natural world have a bit of doom-and-gloom to them because so much is being destroyed.  Sort of like showing a picture of a cute puppy but reminding us that it will get old and die in a dozen years.

Njal's Saga.  As long as I'm reading about Norse textiles, I might as well enjoy some ripping yarns about the Norsemen (and women) who wore them.