While I was weaving on a scarf for Bob last week, he was building me a new deck.  The back steps to my cottage were quite narrow (you couldn't open the door if you were standing on the steps) and in bad shape.  And then they fell apart.  So now I have a nice new deck--I wonder how long before I have dripping dye stains on it (note to self--get some plastic before the next dye run.)  Blogger is being very uncooperative today--it won't let me write beside the pictures, or continue writing below them.  I have to clean house for New Year's Eve and not fuss with the computer, so more later (perhaps my New Year's resolution will be to post more often than once a month or so . . . .)   Happy 2011!!! 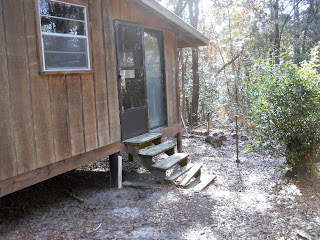 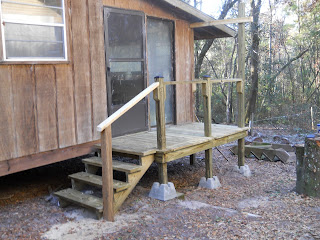 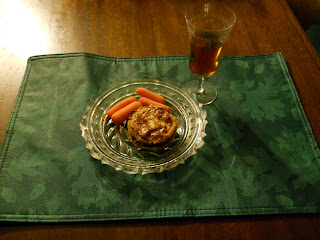 On Hogswatch night, children waiting for the Hogfather to bring presents will leave him a meat pie and glass of sherry, as well as turnips for his pigs.  So meat pies and sherry seem an appropriate supper when watching the movie (I didn't have any turnips so the pigs get carrots.)
We had a lovely Christmas morning going to visit my parents, where I showed that I can cook brunch for four people in a rather small microwave oven.  Over mimosas and sweet bread (and later shrimp and grits) we enjoyed memories of Christmas past.


I've enjoyed a new way of multitasking.  I enjoy spinning--it's calming and soothing, but honesty makes me admit that it could possible be . . . boring.  It involves the hands and the feet but not the mind.  I also enjoy reading--which involves the eyes and the brain.  So . . . . book on a stand, wheel at the chair, fire in the fireplace--what more could one want?  A book later I had enough alpaca to get a scarf on the loom.

So enjoying the Christmas break--is this what retirement is like? 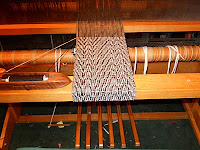 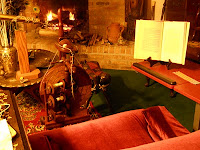 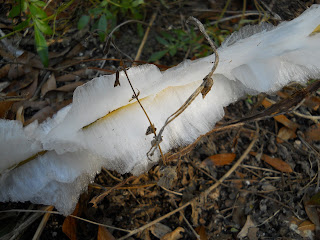 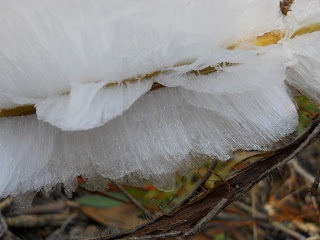 Even in Florida!  Temps have been getting into the low 20s--which is cold for us.  And we get to see strange happenings--like water getting hard and crunchy.
And sometimes it's magical.  The stems of some of our plants froze, and as they split open the water inside froze in impossibly delicate feathery sheets.  Amazing.
And we continue to have problems with annoying little visitors.  Raccoons!
They,re destructive.  They can be viscious.  They chase my outdoor cats away from their food (and I'm glad the cats let them, because otherwise there would be big vet bills to pay).  They aren't afraid of us.  And they're rabies vectors.
But I gotta admit it--they're also darned cute! 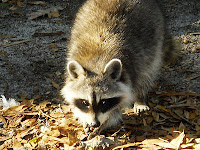 And yet another month

I've sort of figured it out.  Between writing lectures, writing tests, and grading, I'm on the computer 4-5 hours a day at least, so I don't feel like turning it on in the evenings.  Hence--just at a month since the last post.  But the term is over!!!!

So . . . the last month.  First of all, Azrael.  He was a birthday gift from Fate 13 years ago.  We were coming home, and the car ahead of us on the highway had just run over a cat!  Poor thing was screaming in the road.  When we rescued him, we found that it had gone *over* him--not hit him.  Scraped him, and embedded some gravel, but he wasn't hurt.  My first thought was that it had gone over his feet--they looked splayed and huge.  Turned out he's a polydactyl--has extra toes on his front feet.  Bob's Dad nicknamed him "Snowshoes."

Almost three years ago he developed a sarcoma on his back leg.  In that time we've had it removed 7 times.  Seems a bit excessive, but within a few days after the surgery he'd be back to having 100% use of the leg again, so it was worth it.  But a few days after my last post, it went really bad, and it was obvious that it couldn't be removed again (this was only a month after the last removal).  We made the heartbreaking decision to have the leg removed (the alternative was to put him down.  But he's otherwise a healthy cat).  Fortunately, he is adapting pretty well to being a "tripod".  And adapting very well to being spoiled.  It still gives us a twinge to see him hopping around--but I'm glad he's still with us.  And if you get the angle right, you can't tell that anything is missing. 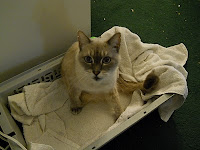 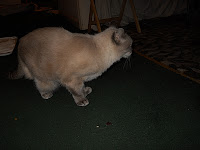 Meanwhile, we finished clearning up the Howl stuff and getting it back to the museum, and spent a morning there cutting down the sugar cane for syrup making (did I remember the camera??)  We've managed a day on the lake in the kayaks.  I did indigo dyeing at the Farm Days at the museum--again, no pictures but I still have blue fingers. 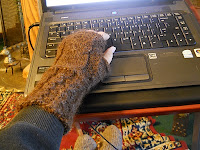 Meanwhile have gotten a couple of small things made.  One of the departing professors left a bag of yarn for the textile lab students to use for samples.  I looked at it--and its alpaca!!!  Heck with the students--I got them some acrylic yarn.  Some of the alpaca went for my mitts--keeps the hands warm while reading or using the computer.  If you look closely, the pattern on the back looks like an owl.
I  also spun some yarn to make a shawl for the woman who cooks on the woodstove at the farm--she kept the haunted trail team going with pots of homemade soup.  To make it a good working shawl, I a) made it of wool, which doesn't catch fire, b) made the long tails which now have a cord to tie behind the back to keep it all out of the way, and c) made it of natural gray--soot colored.  Like all knitted lace, it looked like an uninspired wad fresh off the needles--but with a little washing and stretching it looks quite nice! 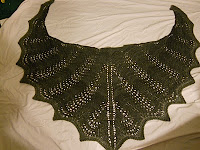 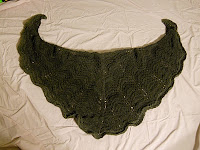 And I've made a couple of batches of fruitcakes--more today.
Last night we got up at 3:00 a.m. to see the meteor showers.  There were a few really nice ones--but the temps were in the 20's and a warm bed seemed inviting . . .
Posted by Ann at 9:12 AM No comments: