And the Wait Is Over!

Meet the newest member of the family, our great-nephew Zeke Duncan Welsh .  At 8 pounds 11 ounces, he's almost 7 pounds more than his big brother Dane was a birth.  And we can only hope that he'll be as great a person as Dane is! 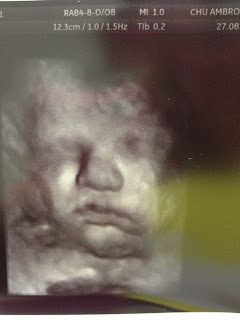 This slightly smashed-up-looking individual is getting a little crowded where he is, and should be entering the world any minute now (in fact, he might already be here--we're waiting for the call/email).

This was the totally unexpected Christmas gift niece Amanda got in her stocking last Christmas.  Good luck, guys! 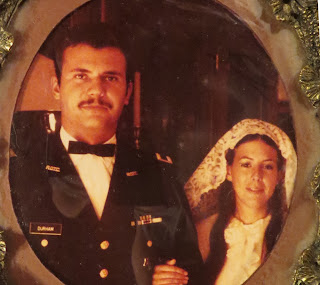 OK--he was teasing me when he said that, and I hit him.  But there it is:  We've been married forty years.  How the heck did that happen?  (Not the marriage--that's been fine--but where the heck did forty years go?????)

I should let Bob write this post--or the next one.  He's far more poetic than I (but I write more often).  Failing poetry, I can only say that the secret to a long and happy marriage is to marry Bob. 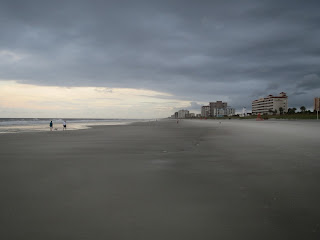 So--a celebration is in order.  Once again, Rob and Jeff came to babysit the critters and we went to Jacksonville to spend a day at the zoo.   So to relax, we went the day before to spend the evening on the beach.   The nice thing about the beach on a Saturday night is that all of the other tourists are off hitting the bars.

Late lunch/early dinner was at Joe's Crab Shack.  Don't know what possessed us to order the Seafood Dinner for Two when we normally just split a dinner when we go out.  It had been a long time since breakfast, and we were hungry, but this was a bit much. 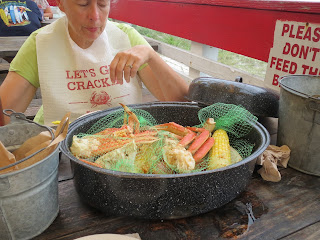 Fortunately we had walked there and the walk back helped.  We got in my "glam" shot at the beach, and the obligatory "selfie" (name for holding the camera up for a self portrait).  To be a true 'selfie' it's supposed to be taken with your cell phone and promptly sent to friends, but we did it the quaint old-fashioned way with a (digital) camera. 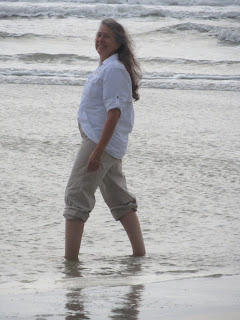 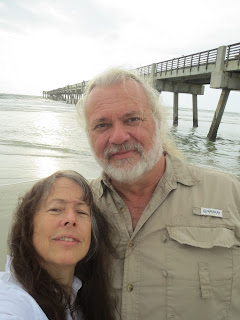 Rather than stay at a chain motel, Bob had found the Casa Marina, which was built around the 1920's in the Spanish Mission style and had an old-world elegant charm.  This is the dining room, set for the huge Sunday brunch (which we didn't have because we wanted to get to the zoo). 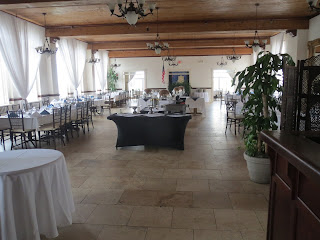 And off to the zoo!  We may be old enough to have been married for 40 years, but we're a couple of eight-year-old kids at the zoo (especially Bob).  We visited every animal, rode the little train, and scattered extra dollar bills around buying treats for everything we were allowed to feed.  Although we could have saved our dollar on the cup of nectar for the lorikeets--they seemed to be more interested in savory than sweet and were ignoring the proffered cups and licking Bob instead. 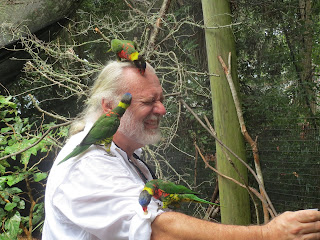 We fed the giraffes (with their weird foot-long tongues that wrap around the leaves), watched the baby jaguar on his nest-box video, and even went for the 4D Ice Age Ride (mainly because there was a cloudburst and it was inside--but it was fun). 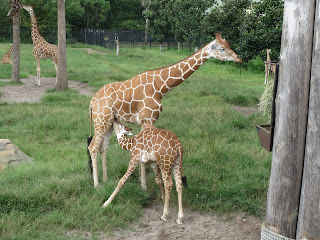 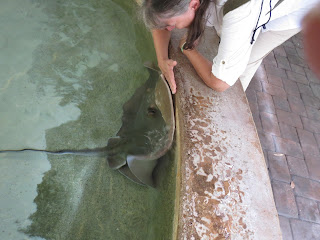 Then we found the stingray petting pool.  It was a good thing that we found it later, because I think we would have missed the rest of the zoo if Bob had found it earlier.  He was getting down on his knees so he could reach way over and pat the strange smooth slippery rays as they swam by.   I was fascinated by one that would not only come up to us, but would even stick his head out of the water to explore my hand.  They have weird rubbery lips and it was only a bit later that I realized that letting a member of the shark family snuffle up your arm might not be a good idea. 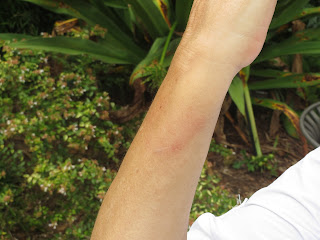 Yep--that mark is where she bit me.  Fortunately, their teeth aren't sharp--more like flat molars-- so all I got was a pinch--but they're designed to be able to crush clam shells so it was a pretty good pinch!
They have scheduled feeding times at the pool, and as it got closer the rays were getting more excited and more interested in snuffling around our hands (we kept clear of the mouths).  Finally we were able to buy our little bits of fish and let them suction the snacks out of our hands.
We hit a barbecue place on the way home, and as I had mentioned to the waitress that we were celebrating our anniversary we were treated to a song and a dish of banana/nilla wafer pudding by the staff. 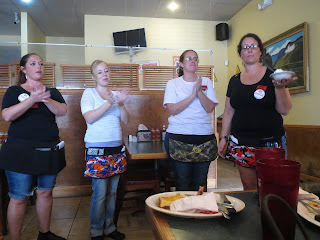 ﻿
A trip to the zoo, and banana pudding--what more could one ask?

Maybe for another forty years.

After two years of "retirement", the Sick Puppies (Rob, Jeff, Bob, and myself) got talked into doing the Haunted Trail again this yeaer.

And the imagination stirs . . .

Some people down the road were throwing out some furniture--putting it out by the road with a "free" sign.  Bob dragged home a headboard. 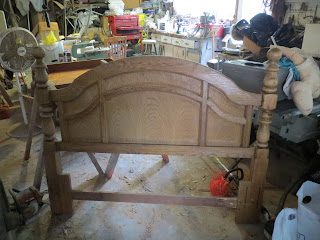 Some sawing, making a shadow box, cutting out some flames (from the blades of a discarded ceiling fan), and applying the weathering skills that he has honed on his scale models--and he has a very creepy altar  (more altered dolls will be added). 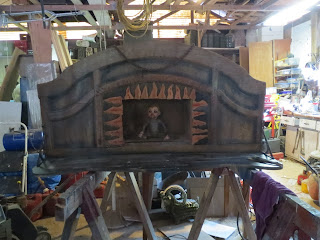 This is a learning day for me.

I learned how to take a video on my camera.  (OK--you point the camera and hold down the video button.  It ain't rocket science.  But I haven't done it before).

For me, this is pretty amazing.  Usually if I need computer geek stuff done I make one of my famous chocolate cheesecakes and bribe a geek.  But I don't have cream cheese, chocolate, or a convenient geek around this evening.

Finally--seeing if I can upload a video to the blog.  Can I stand to be clever this many times in one day?

And all this simply because at the museum today I put a pan of water out for the armadillo to play in.  One does not think of armadillos as being water creatures, but they do love it.

Been a busy  couple of weeks.  I've been helping set up a pre-Columbian pottery and textile display at the Museum of Fine Arts on campus (that will get it's own post when I take more pictures)

Meanwhile, it's been awhile since I showed the projects I've been working on.  The prettiest is this shawl for a friend to wear at her wedding (might wear it as a shawl, might pin it in her hair as a veil). It's a handspun fine wool/silk and weighs about two ounces. 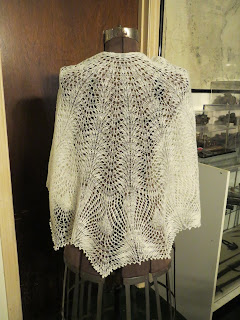 On the other end of the "pretty" scale is this scarf--a little over half finished now.  Store-bought yarn for this one.  Each color represents 5 degrees of temperature--so it was pale blues and purples in January and February, and oranges and reds now.  More yellows and greens than it would have normally been because it rained for about 6 weeks in a row and it kept the temperatures down a bit.  I knit one line a day--so it should be finished by January 1 and show the year in temperatures.﻿ 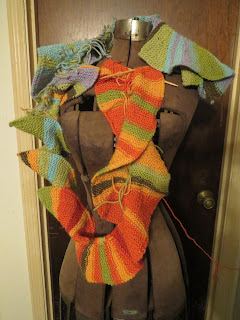 Now that Ella the Hawk is more-or-less trained, the next step is to teach her to get into a carrying box--that's going to be a challenge.  The first challenge was that we didn't have a box for her.  Normally we carry the birds in dog crates, but she's so big that a dog box big enough for her to sit upright in would be too big to carry.  There are falconry sites where you can order hawk boxes, but they're 1) expensive, and 2)  heavy.  I found a site that gave instructions for making one out of coroplastic (the sheet plastic used for political signs).  One sheet of recycled plastic, some tape, and contact cement later and I have this: 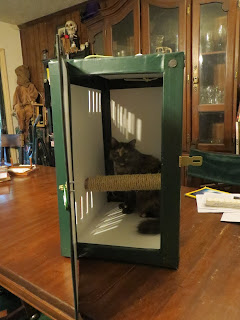 Unfortunately Ella doesn't seem to like it as much as RiverSong.
I was asked to put up a couple of dresses for display at the Lemoyne Art Gallery.  That would usually be an easy thing--but one of the dresses was from the 1890s and was impossibly tiny, so I had to build a display form for it.  I didn't take a picture of it undressed (it wasn't very impressive) but here's the finished product--and another picture with me in it for scale. 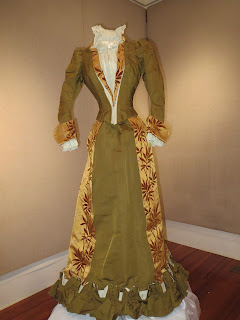 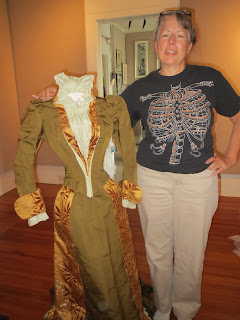 
In a May post I mentioned that I was going to keep track of my reading--that's three months, and have I posted a single book?  Oops--here's the catch up:

The four books in the Tiffany Aching series by Terry Pratchett.  Like all of Pratchett's books, it's fluffy on the outside with a serious undercurrent.

"A Tramp Abroad" by Mark Twain

And some reading on pre-Columbian Textiles

And now some cats:

Apache took it in stride when we tossed a paper bag onto his basket on the counter. 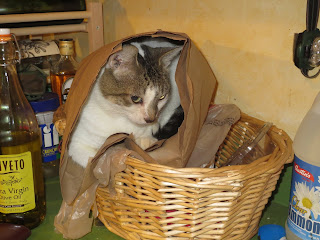 RiverSong managed to wiggle between Bob's feet when he was sitting on the floor. 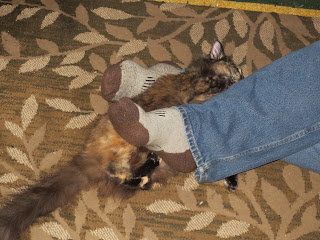 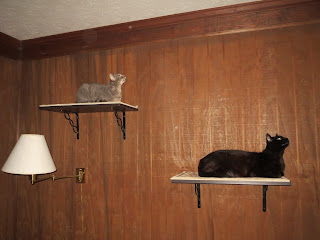