Well, the new TreeTop to Tree Top course is opening at the museum this week--and the staff got to guinea pig it first.

I knew there would be zip lines, and maybe some bridges from platform to platform, but I didn't realize it would be an Honest-to-Goodness obstacle course.  Bob was shooting pictures from below, which really doesn't capture it.  IF (and that's a mighty big IF) I ever go again, I'll put a camera on a lanyard and get the treetop view.

So what you have is a harness, two caribiner clips on safety cords, and a pulley.  There is an overhead safety cord along the entire course and around each platform--so at each stage you clip yourself to it (hence the two clips--you move one, and then the other, so you're never without a clip in place. 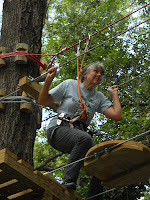 So up the ladder, onto a platform, and see what awaits.  On this one, there is a sliding platform so that you "surf" to the next one.

I do have to point out that the various bridges that you cross are on cables, so they're not exactly sturdy.  Mostly the opposite--they're hanging on cables or cords so you're stepping from wobbly swing to wobbly swing. 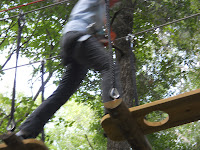 Here's an action shot so you get the idea--nothing solid and stable here.

When I first heard about this course, I knew there would be zip lines, and I thought that would be the challenge.  Turns out that they're the easy part--you just clip on your pulley, sit down in your harness, and go for a ride.  It's all the other stuff that will get to you. 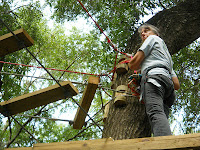 This is my favorite shot.  There is a certain nobility in my expression as I contemplate my next move, and the harness makes my butt look good.

The course is divided into three parts.  Each part goes higher and gets more challenging as you go along.  Being as I didn't know if I would ever get up here again, I did the whole thing.  It took about 1 1/2 hours.  I think the workout made up for missing my Zumba class tonight. 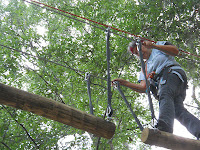 Yep--walking on a log.  Later on I'll look back on this with nostalgia.
Bob wasn't in an area to get the two really evil obstacles.  One was a series of pieces of 4x4 lumber (that's 4 inches by 4 inches)--hanging on end.  So you had this "bridge" of 4 inch square very wobbly steps.  Even more evil were the stirrups on cords--get one foot in each on and you're doing the splits in mid air. 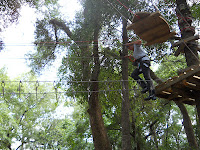 Or this set of cable loops.  Like the log--later on this will look good to me.  Because at one platform I looked over and saw that the zip line to the next was coming off the base of the platform (instead of the usual shoulder level) and the other end was higher.  I thought it might be that you just went hand-over-hand and dragged yourself over.  Then I realized that you were supposed to walk over the half-inch cable (Bob says I exaggerate--he thinks the cables are 5/8") 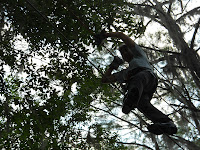 And of course there are zip lines--many of them.  They're easy.  And fun.  So I close with a couple of last shots--one to give an idea of how high up I was, and the final one of zipping off into the forest.

Will I do this again.  Not sure.  Maybe?  Maybe if someone else wants to go and needs to me hold his/her hand??  Definitely not the nighttime course!!  Gotta draw the line somewhere. 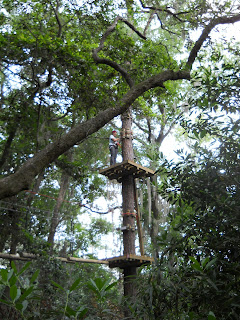 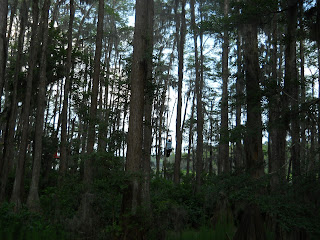 Where the Wild Things Are

Bob went out to feed the chickens this morning, and the front of the barn looked like this: 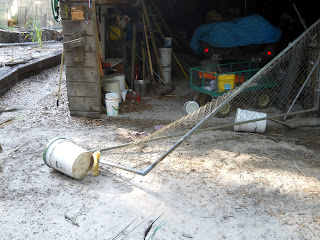 Either we have a 300-pound racon, or a bear who wanted to try chicken feed.  We found one of the buckets (which weigh about 40 pounds when full) down in the woods).  Won't be using this bucket again. 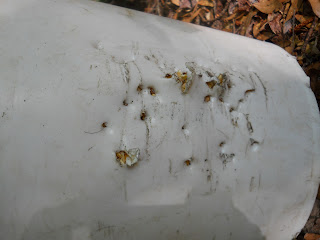 Perhaps we will start carrying some whistles or air horns when we go out in the mornings. 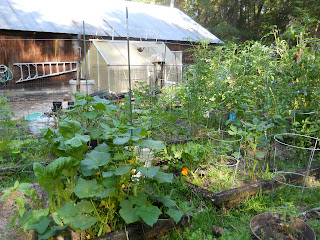 After cleaning up after the bear, we went to the museum where I got to walk around with the owl for awhile, and started training on the little kestral (aka sparrowhawk).  She's an adorable little bird--looks like a love child of a peregrine falcon and a parrakeet.  Pictures to come.

It's spring, and babies are popping out all over. 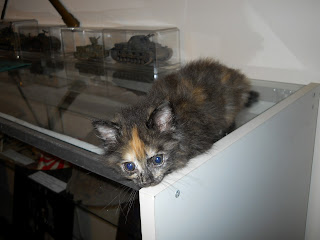 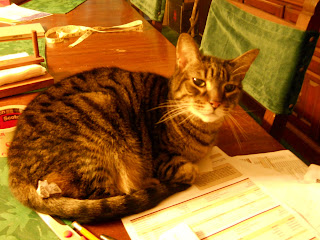 RiverSong continues to be impossibly adorable (a short phase, we know, so we're enjoying while it lasts.  Fiona is not amused.

My animal rehabber friend passed a couple of litters of opossums to me to raise (along with Miss Hissy Boo).  Many times little possums are sweet and friendly little guys.  This time--not so much.  It will not break my heart when it's time to release this group. 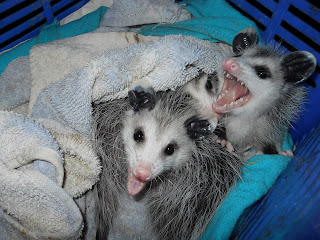 And remember those tiny little grubby baby wrens from a post or two ago?  Here they are, about 10 days later.  Takes a lot of bugs to do this (especially with 5 babies this year--the parents are back and forth with bugs and caterpillers about every 10 minutes from dawn til dusk) 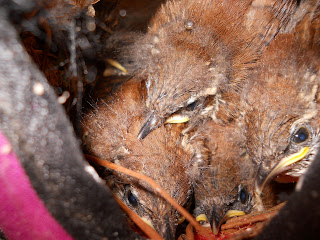 Why is there a  persistent myth that "cats can take care of themselves?"

The chain of events is thus:  Person A has a kitten but doesn't want it.  She takes it to Person B (her mother-in-law) who also doesn't want it, so she's just going to turn it loose on campus.  Fortunately, before the release, she shows it to Person C, who rescues her from said release (Bless you, Kathy!) who then calls Person D (aka Bob).

We might have been able to resist if she hadn't described her as "black with some gold blotches."  A tortoiseshell.  We both love torties--they tend to have very "well-defined" personalities.  We were doomed before we ever met her--and totally doomed when we did.  She'sa friendly little fuzzball,  maybe 5 weeks old, with a funny little blotchy face.  Her name is RiverSong (which will be recognized by Dr. Who fans)

It can be tricky to introduce a new cat into an established household (we do have 4 other cats), so we bought a kitty condo.  When we're not around, she's safe in there and everyone can get acquainted.

It's been a long time since we had a tiny kitten around (Fiona, who is now 14).  Pookha was about 2 months old when she show up on our doorstep, and Apache and Nazgul were both adults.  In a short time she will enter the stage of being A Nuisance and A Bother, but at the moment there's nothing she does that isn't completely adorable. 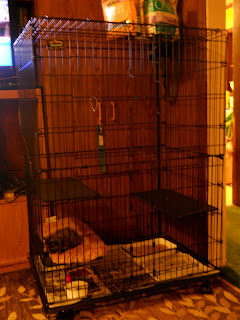 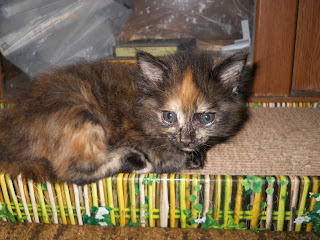 I survived another term!  Of course the last week is crazy with all of the grading, dealing with any last minute problems, and getting everything tidied up and posted.  Then came some whirlwind housekeeping (rather neglected due to work, and because for awhile neither Bob's feet nor my back were on speaking terms with us so evenings were spent mostly sitting) because Mike and Margo (brother and sister-in-law) were coming for a visit.

That was a hoot--and no pictures.  Well--it was mostly non-stop talking, either here or visiting the parents.  I did take the camera on the last day, but Mom got tired after the pizza and went to take a nap.  We thought about taking a group picture around her snoozing form, but some of us want to live awhile longer . . .   And I was glad that we didn't have the camera when we met Jeff and Rob for dinner because there was enough teasing that Jeff and I ended up in tearful hysterics (the rest of the table restrained themselves to giggle fits).

Now Mike and Margo are back in Boston--gotta admit it--I miss them.

But here are a few other pictures. The first two are my lab students on tie-dye day (they have to learn about dyeing but might as well have some fun, especially since it's towards the end of the term) 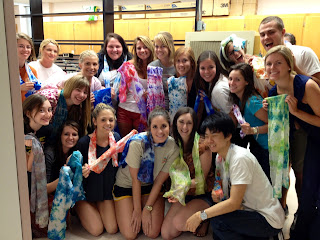 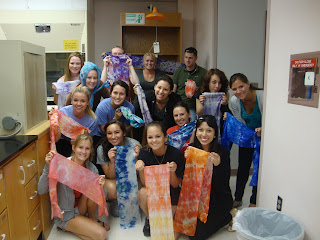 And a finished scarf of mine.  This is a strange yarn--75%wool, 25% stainless steel.  Yep--a *very* thin steel wire wrapped in wool.  Wonky to work with--there is, of course, no stretch to the yarn at all.  The final product is fun to play with--if I want it long and thin, I can pull it.  If I want it short and fat, I can tug it the other way.   If I want a fancy edging, I just pinch it into place.  I might have to get some more of this to play with.  I couldn't get a clear picture--perhaps because it is so gauzy.  The scarf weighs a little under 1/2 ounce. 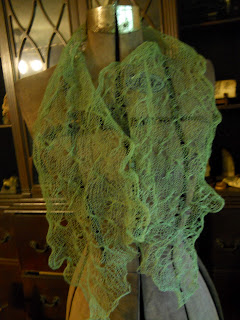 And this little project was found by a neighbor of Rob and Jeff's--I've had her almost two weeks, but she still earns her name of Hissy Boo (some possums are friendly--others, not so much.  But she's cute) 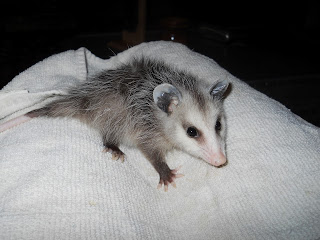 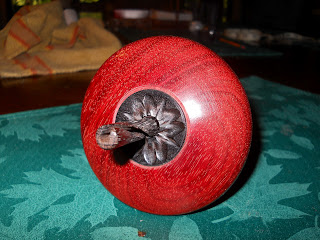 But the prize for a work-in-progress goes to the little Carolina wrens who have built a nest on our back porch.  The parents are bringing food about every 15 minutes from dawn to dusk to feed those gaping mouths.  These little guys are only a couple of days old.  Unbelievably, in about two weeks they will fly off. 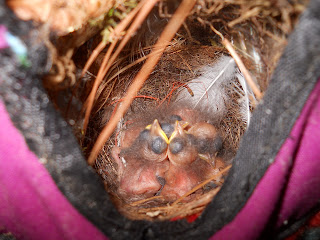 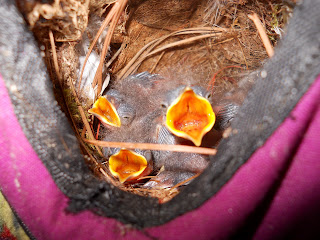