Sometimes you are given the gift of a perfect day--and it's foolish not to accept it.

It's a couple of days after Christmas--time to take advantage of some days off to do things like catch up on housecleaning, or replacing some rotted boards on the front deck.  That was the plan for today.

But the day was beautiful--cool enough to wear a sweatshirt, but not cold enough to shiver.  Clear intensly blue sky.  There were some other items on the "things to do during the break" list--like go hiking at St. Marks.  We moved that up to the top of the list and took off to hiked the nature trails around the lighthouse.  Perhaps "hike" is too vigorous a word--we wandered. 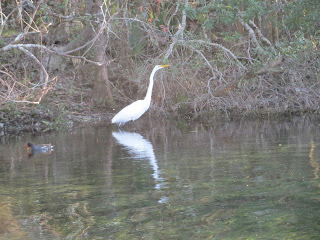 After a few hours, we drove into St. Marks for oysters and shriimp.  It was still too lovely to go home, so we went to Wakulla Springs.  The problem with living someplace is that you don't get around seeing the sights--so we try to get to Wakulla at least once a year.  Our river boat tour was the last one of the day.  Not only was the light beautiful, but our boat driver was a man who enjoyed his job, and took advantage of the fact that there would be no boats coming behind to give us a much longer tour than usual.  We saw very few alligators (unusual for the Springs) but made up for it in manatees.  I wish I could have gotten a good picture of the cormorant who followed us for about 20 minutes.  Apparently the boat stirs up small fish and the bird takes advantage of this.  We got a great view of how they swim underwater; he would then pop up to swallow his catch. 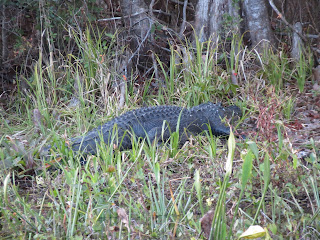 We came back to the dock just as the sun set and the moon rose.  It was time to go home. 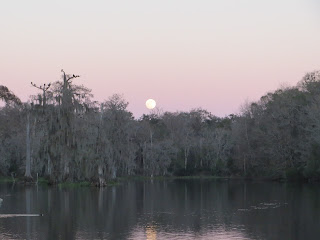 It was a perfect day, spent with the man who is both my true love and my best friend.

I just had my 60th birthday (gasp!).  To mark this occasion, I decided to cross something off my bucket list:  I jumped out of a perfectly good airplane.

OK--to be technically accurate, I did not jump from the plane.  I was strapped to an experienced skydiver, and *he* did the jumping.

I'm not sure exactly what I was expecting.  I did rather expect the several pages of paperwork which basically read "you've elected to jump out of a perfectly good airplane and you agree that it's not our fault if anything goes wrong."   I was somehow expecting my training to last more than 10 minutes (mostly "you're along for the ride and let the experienced guy take care of things).

My expectation of a "perfectly good airplane" was not a wee tiny two-seater Cessna that's almost as old as I am.  And it used to be a two-seater.  The seats had been taken out so that 5 people could squeeze in--four jumpers (2 two with large chute packs) and the pilot.  I was packed into the tiny gap between the pilot and the door.  Periodically he tapped my shoulder to indicate that I should bow my head so he could read the instrument panel. 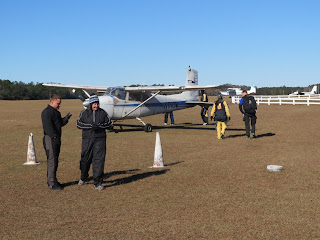 So I'm sitting cozily, knees around my ears, my jump partner sitting on my feet in front of me, and about a mile up it occurs to me that I'm not strapped to him.  How is that going to happen?  Well, it can be done in such a confined area--it just gets a bit . . . personal.

We're two miles up, the checklist is checked, and suddenly the door is open.  Remember that I had been squeezed in between the pilot and the door.  Now I was squeezed in between the pilot and . . . nothing.  Language ensued.  The Tim (my jumper) indicated that I should swing out and put my feet on a little step outside of the plane.  Really?  Like that's going to happen.  But I did--and suddenly the plane just wasn't there any more.

Freefall didn't really feel like falling--it's just a great unobstructed view of the ground which inexplicably seems to be getting closer very quickly.  When you first get ready to leave the plane, the rider (me) is supposed to hang onto her harness and keep her elbows in.  After you're out, the jumper taps your shoulder and you spread your arms out in the free-fall position.  Well--he tapped, and then he pounded a bit, and then he finally reached around and pried my hands loose.

From watching war movies on TV I was expected a big jolt when the chute opened.  It was more of just doing a gentle swing from a horizontal position to a vertical one.  We drifted for a bit--I got to take control and do a couple of gentle turns.  He took them back and did some swirling loops until I suggested that he stop unless he wanted to check out my breakfast Cheerios. 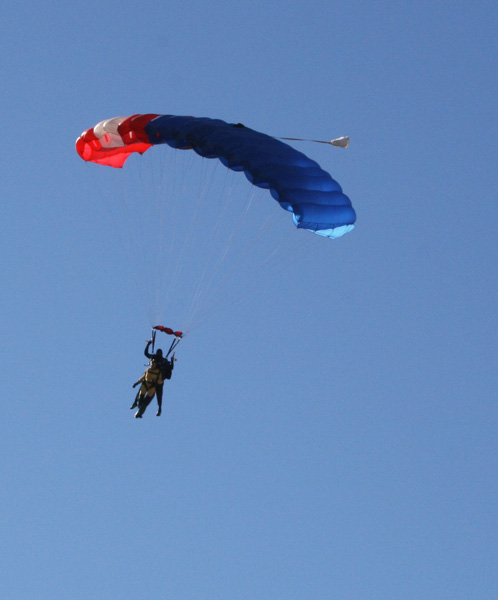 The landing was equally gentle--I just got my legs up and out of the way and let him slide in. 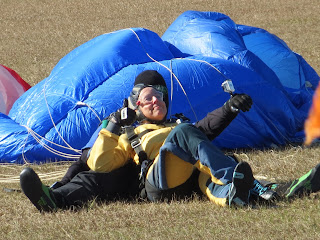 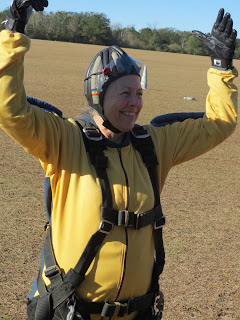