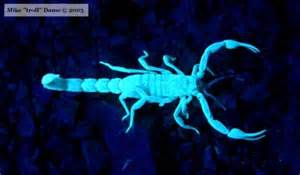 Scorpions glow under black light.  No one knows why, or if it provides any benefit to the scorpion.  Students from the biology dept. at the university brought some scorpions and black lights out to the museum just so we could all see this.


This is just an example of the randomness of the last month.  There's been a lot of paperwork and running around to settle Dad's estate--he had it all pretty well tidied up but there are always loose ends. 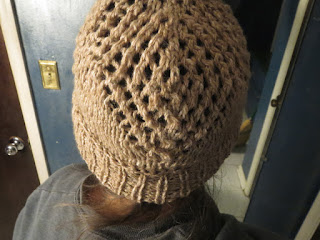 And it's been cold!  Well, cold by Florida standards, which is pleasantly cool by the standards of the rest of the country.  This triggers a lot of compulsive knitting on my part.  Never mind that I have dozens of beautiful handspun, handknit shawls and scarves and hats--give me some cold weather and I need to make more.  Maybe just because it makes more sense than knitting warm woolies when it's 90 degrees.   So there's been a couple of hats (including this rather posh little watch cap--simple, but it's made from handspun 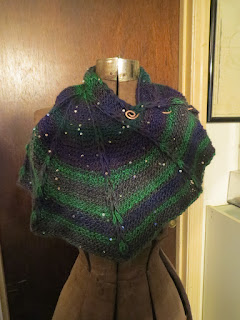 camel down and silk), another more prosaic hat (but with matching mitts), and a couple of scarves.  One was a pattern called "dragon wing" for a friend (Those little speckles are actually sequins--they sparkle).  It's supposed to be fastened at one shoulder with buttons, but I found that they caught in the knit and were hard to untangle.  I wanted a shawl pin instead, but couldn't find one.  So I poked around in the barn and found some scrap copper wire.  It didn't look very inspiring, but with a bit of straightening, bending, pounding, and polishing it was nicely transformed.  So nicely that I took some more wire and made another pin, and then a hair stick. 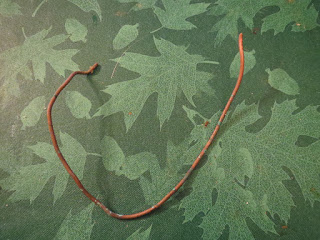 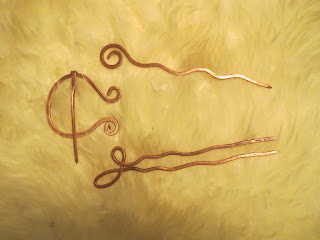 And we've been spending as many evenings as possible just sitting in front of the fire. It's not a very efficient fireplace--mostly it sucks warm air out of the rest of the house and sends it up the chimney--but there's something so atavistically soul-satisfying about sitting near flames on a cold night, listening to the crackling and the soft sifting of the ashes.  A cup of tea, a good book, and a cat--life is good
And we don't have a lack of firewood, so it doesn't really matter that our fireplace is a bit wasteful.  We've still been splitting and stacking from those trees we had downed--and still have one more tree to go. 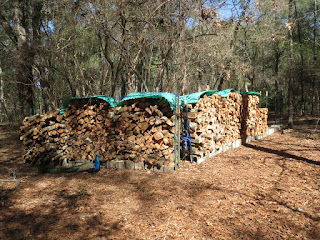 Finally, we went to a Renaissance Faire last weekend.  One of our goals in retirement was to make more road trips--not long vacations, just day trips.  This one was in Gainesville (about a three-hour drive--our limit for day trips is 4 hours).  Ren fairs are just fun--lots of people wandering around in costumes, gnawing on turkey legs (never mind that turkeys are a new-world animal and not round in Europe during the Middle Ages and Renaissance), living chess boards, live plays, belly dancers. 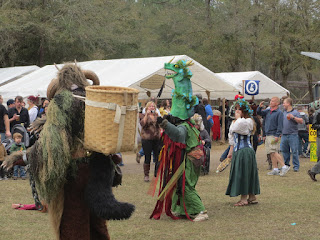 I loved the jousting.  Beautiful armor, even on the horses, and beautifully trained horses at that.  And even though you know it's choreographed, your heart still pounds as the knights charge with their lances, and bits of wood go flying, and sometimes the knights themselves. 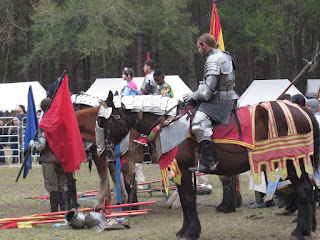