I have finished going through all of the books (well, all of the books in the guest room . . .)  We have three laundry baskets full that will go to Friends of the Library.  Does this mean that now I'll move out a bookshelf and move in my lady's desk and make the Gryffindor reading room?

Heck, no.  The remaining books have stretched and fluffed and those sitting sideways on top of other books are now actually on the shelf in a proper upright position and the end result is about 2 1/2 empty shelves.  Which Bob is eyeing with lust in his heart--his room is a bit overflowing (which is a major understatement).  Yeah--go ahead.  I'll come up with a Plan B for Gryffindor.

So has that been a waste of several days of going through a few hundred books?  No, actually.  I *like* books, and specifically, I like *my* books.  I was thinking that if I went to someone's house and saw these books on a shelf, that I would like to get to know this person.  And it's nice to have them dusted and tidy and a few have been selected for reading in the near future.   The hard part was giving up some of the ones that I actually like.  For example--since I was a kid, I've been a fan of Sherlock Holmes.  But how many "complete collections" do I really need?  (answer--two.  One with the original illustrations and an annotated version.  I like annotations when I'm feeling intellectual but find them distracting if I just want to enjoy the story).  How many copies of Beowulf do I need?  (answer--four.  One of my original textbook with linquistic and literary criticism, my Seamus Heany one because it was translated by a poet and kept the feel of the original, one from 1939 that was a give from a former boss and has some interesting art deco illustrations and one that's a graphic novel, aka comic book)

And you do find gems.  One is a collection of letters from famous women.  The book was published in 1929  (have I mentioned that I like *old* books?).  What gave me pause was the introduction, decrying the dying art of letter-writing:

"The typewriter has done away with the pen; a machine age, which was to have provided leisure, demands more hours in service to it than did the time of hand crafts and long working days.  The motion picture, the radio, the motor car, the washing machine are jealous masters. "

What would the author think of the millions of people now enslaved to their cell phones?

Winter! And Many Books

Last year I bemoaned the fact that we never had winter.  No moaning this year!  OK--it's not winter by Northern standards, but for Florida it's been pretty darned cold.  I even saw this: 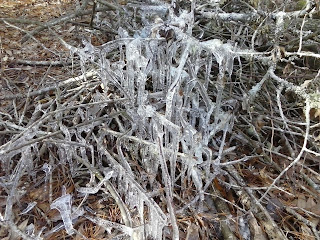 Wild ice!  Something rarely seen here.  In Florida we have domesticated ice--it comes in regular cubes or half moons, from indoor freezers.  Not this free-form style, outside.
It almost feels like we've been on a vacation.  Saying things like "It's a good time of year to go out in the kayaks, but it's too cold right now."  Wearing sweatshirts and hats and jackets.  Things are familiar, but strange.
So that does mean spending time indoors (usually summer is our indoor time).  I've started on my first resolution--The Gryiffindor Reading Room.  I want to get that lady's writing table out of Chez Wicca.  Then I can move the small floor loom that's in the living room out there and actually use it.   I can't where it is--I've tried once, and the cats chewed up my weaving.  I've thought about re-homing it, but it's smaller than my big one and doesn't put as much stress on the weaving threads so it would be good for using my handspun.   Of course, then we'll have to build a cat tree to replace it because it's popular as a cat hangout now.  That's another project.
So the table will (hopefully) be moved to the guest room.  That's a bit of a challenge--right now, it holds a bed, a office armoire, my big floor loom, a table for the squirrel cage, and six bookshelves.  The only way to fit it in is to lose one of the bookshelves, which means (gasp!) rehoming some books. 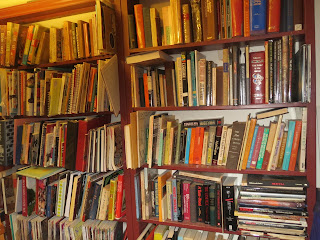 There's two of them.  So that's what I've started on today--going through book by book and seeing what I can let go.  It's hard.   Some I'm just sentimental about--where I got them, what I was doing in that stage of my life.  Most are stuff I'm interested in, even if I haven't read them for years.  Some are like finding old friends--"hey, dude, I didn't know you were here. How's it going?"  But there are some that have just wandered in over the years, and maybe they can wander back out again.

I've managed to clear off two shelves' worth--but that may be temporary.  Before they go to the Friends of the Library, I have to let Bob look them over and I bet a bunch of them are going to go right back on the shelf--he's sentimental too.

Even if I don't get to move out a bookshelf, at least they'll be dusted and a bit more organized.  That's something, isn't it?