The Endless Placemats (and a Couple of Pineapples)

Sigh  l really like the idea of weaving.  I like the feeling of history, of mystery, of magic.  Watching fabric form beneath your hands.  I was meant to weave.  Looms find me almost as often as cats do.  I have bought *one* loom--actually there were two table looms at an auction for $7.  Bob found four table looms that were being thrown away as a school got away from such hands-on activities (I re-homed five out of those six looms).  Bob pulled a large tapestry loom from a dumpster, and intercepted a large floor loom on its way to surplus.  I won a small inkle loom as a door prize.  A friend of my mother gave me a small floor loom.  Obviously, it is my destiny to weave.

I just don't actually do it.

But saying that's all there is to weaving is like saying all there is to cooking a fine dinner is arranging the food on the plates and lighting the candles.  There are a few preliminaries.  The warp is a bunch of separate threads all cut to a specific length (usually at least a couple of hundred of them)  They have to be tied to a back roller and rolled on, in order, under even tension.  Then one by one you thread them through a heddle (which determines the pattern) and the reed (which holds them at the proper distance apart) and then tie to the front roller--again, all under equal tension.  *Then* you start weaving.

So I came up with the brilliant plan of putting on enough warp to weave about eight placemats (because all the threading and stuff takes just as long for eight as it does for four so why not?)  That way, whenever I got the urge, I could go do the toss the shuttle thing.

That was, I think last March.  They're not done yet.  They were one of my New Year's resolutions--didn't quite get done in January.  It takes about 20 minutes do to the weaving for each placemat.  What gives?

A few years ago I had lunch at the home of a weaving friend (who actually weaves) and there were some almost-lovely placemats on the table that she had gotten as part of a weaving exchange.  Almost lovely, because at each end of them was a lumpy turned-under and sewn almost straight hem.  I didn't like the look of that. 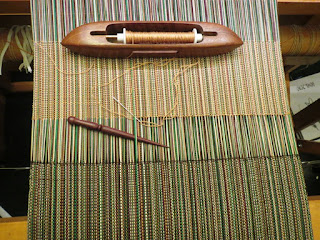 There's a way around that.  Instead of folding under the end a couple of times and sewing it down, you can do a thing called "hemstitching" where you take four warp threads and do a little embroidery stitch around them, and continue on down the width of the weaving.  It looks nice.  What I hadn't thought all the way through was that I have some 360 warp ends on these, so that means 90 little groups at each end, or 180 little groups per placemat.  I'm not fast at this.  It takes me 20-30 minutes for each end.

So the rhythm of weaving is toss the shuttle for about 5 minutes to get a placemat started, then do hemstitching for 20 minutes.  Do the mesmerizing, meditative dance of weaving for 15 minutes--and it's time to hemstitch the other end.  Hence--placemats that have been on the loom for 10 months.

Pineapples have nothing to do with this.  But Bob wanted his pineapple in the blog, and why not?  He does successfully grow a few pineapples each year, but they're usually about 5 inches tall and a couple of bites each.  This year he grew two large (and very sweet) ones.  In less time than it's taken me to weave a half-dozen placemats. 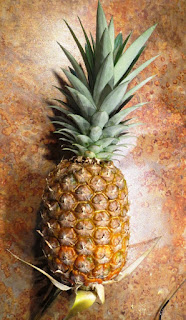 The Universal Traveler.  This is a sort of self-help, creative problem-solving book that showed up during the book purge.  I think it may have been a required book for a creativity class I had to take when I was getting my degree.  I enjoyed the class, but not this book--it's just a little too cheerful, as in "Unhappy in your job??  Try to hang out with the positive people at work, and think of ways to make your job seem like a vacation!"   Yeah, right.  It's leaving the house.

Madam Bovary.  Also showed up in the book purge.  A classic that I had never read.  *Very* Romantic era (came out in the 1850's) sturm und drang descent into dissolution and degradation.  I'm keeping this one.

Monsterology.  A friend gave me a gift card to Barnes and Noble for my birthday so I added this to my collection.  It's part of a series of children's books that I love.  Sepia toned pages, hand drawings, font that looks like handwriting--if someone recalls seeing a letter, there's an envelope with the letter in it, small artifacts.  I find these charming.

The Story of Colour; an Exploration.  Despite the many hundreds of physical books in the house, I downloaded this one on a whim (the positive side of e-books is that you don't have to make shelf space for them.  It's a study of the meanings of color in different cultures, and how a culture can actually change your perceptions of color.  It's a subject of interest to me.  Unfortunately, while this has some interesting information (I didn't know that there wasn't a word for the color orange in English until the 1500's when orange trees were introduced) it reads like a collection of high school essays.