Halloween Howl 2014 has come to a close.  We spent most of yesterday doing the last of the cleanup (well--almost the last.  But there are younger stronger people who can clean up the last bits).

The Howl is a museum-wide event, with kid's games, live music, costume contest and--our side of it--the haunted trail.  This year was a record-breaking success.  In the two nights that it ran, over 4,000 people attended the museum, and 1900 went through our trail (that number includes the repeats--those people who stand in the hour (or two hour) line, go through the trail, then get back in line again,  We're always proud of our trail--it's of a professional quality, truly scary (many people can't make it all the way through, and we get a share of people who scream, fall, or wet themselves) without resorting to the shock of blood and guts.

It's mostly done by our core group of four--Rob, Jeff, Bob, and myself.  We were lucky enough to get a few more hard-working volunteers for the build (shout outs to Donny, Joel, Phil, Gill, and Jim).  All told, there are at least 1,000 person hours involved to build, run, and then clean up the trail.  And for those two nights, it's worth it.

Problem is--I forget to bring the camera, or don't have time to go take pictures.  I will have to twist some arms to get people to send some to me.  But in the meantime, here are some preliminaries. 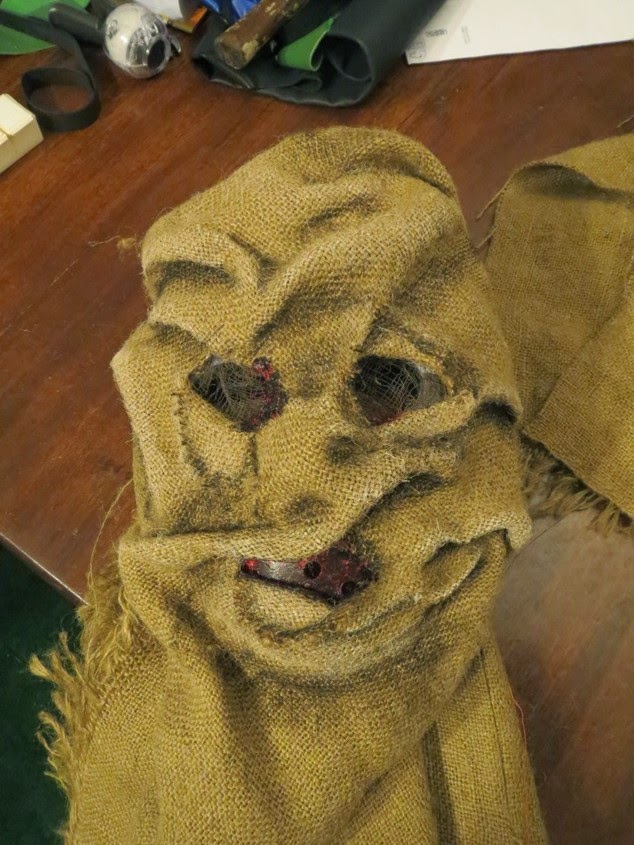 First, a couple of masks.  Jeff wanted some creepy scarecrow masks, and also some that looked like ritualistic skull masks.  Here's a sample of what I made (the oddness at the mouth of the scarecrow mask is that I built them on Jason-style hockey masks to keep the burlap off the actor's faces) 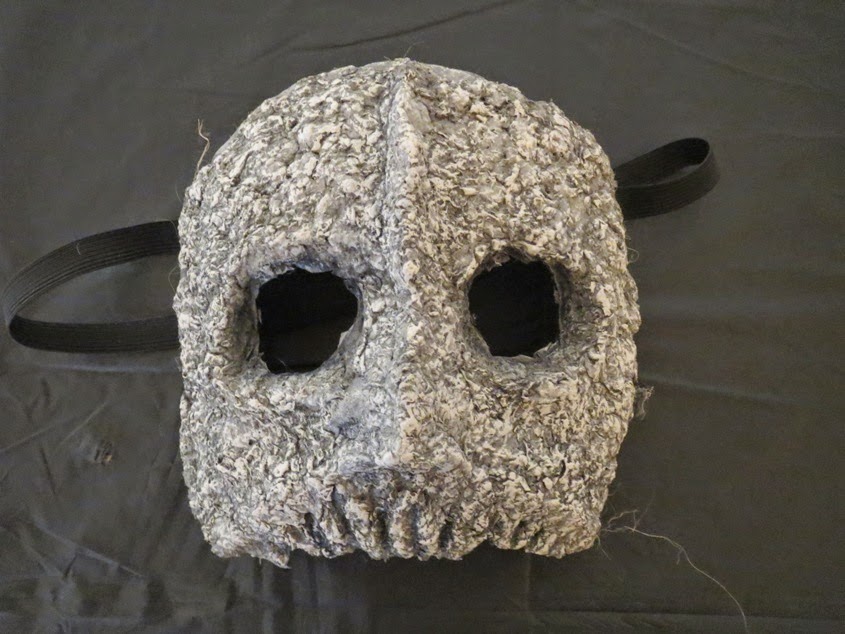 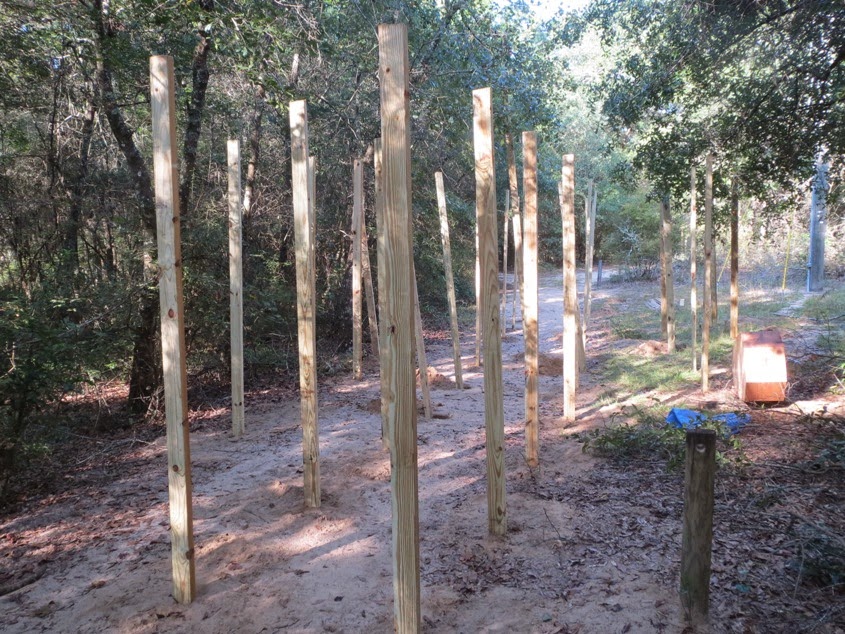 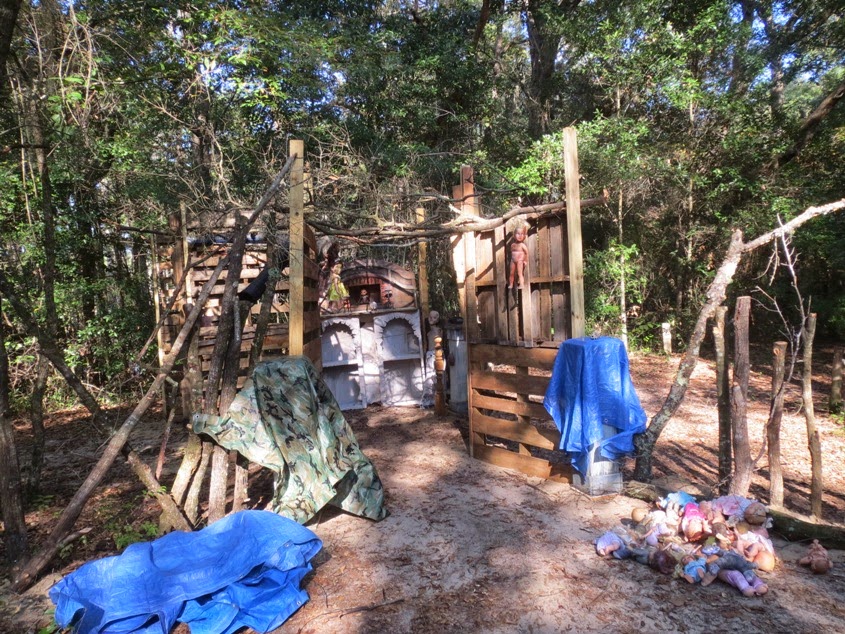 All of the scenes start off by digging in a forest of 2x4s.  They would later be covered in walls to form mini-mazes (usually made by sheets, so we can take them down and use them year after year, unlike black plastic which has to go to the landfill).  We ended up planting almost 200 of them in the first weekend.  One just has to have faith that with some walls, decorations, and proper lighting that we can turn this into something so unnerving that people will forgo the hour or more that they stood in line, and turn back rather than enter it.   On this one, Bob has started adding the pallets to make walls (we can scrounge the pallets for free.  He also made use of wood that had been cut down the on the nature trail prior to a planned control burn.  He would later add more fencing, then the final touch of about 150 dolls and an equal number of candles to light them.  For some reason, many people find this scene to be disturbing.

I did get a quick shot of the volunteer tent where almost 30 actors get into costume and makeup.  No matter how good the sets, you have to have actors to make it come alive. I did get one shot of an almost-finished scene.  This is Jeff's "Circus of Tate's Hell" (a local area of infamous reputation).  This was our final scene--our philosophy is that if you have a strong beginning scene, and a stronger final scene, that's what people will remember. 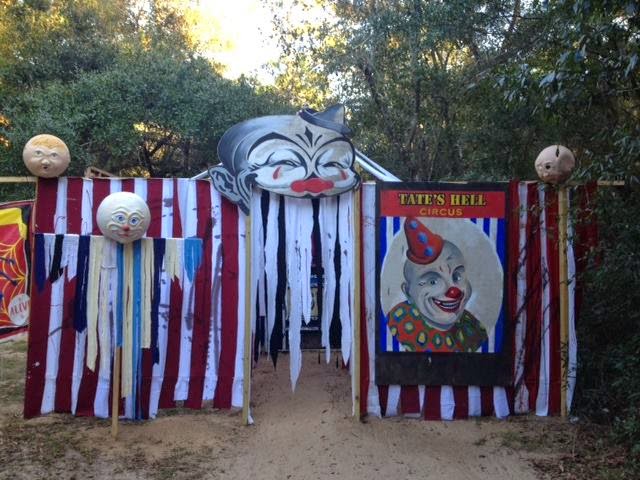 Keep your fingers crossed that I find pictures of the finished trail.

Here's the finished video with Jim Fowler and the Museum's hawk.  It was filmed green screen with the pretty background added in.  What you can't see is me, the nervous stage mother, about 5 feet away hoping the hawk would behave herself (she did).  In the video, there is one closeup of the hawk--I'm holding her in that shot (invisibly, of course).

What I didn't think about until my office mate made the comment is what a nice video it is.  Most political ads are pure mudslinging--we're all happy when Nov. 4 comes around and we don't have to listen to all that negativity.  Voting seems to be choosing the lesser of evils.  So yes--I'm glad I had even a small part in this one.