And Now It Be March

How easy it is to get out of the habit of chronicalling one's life.  One keeps meaning to update, but "maybe tomorrow" (which may explain why I have yet to do my taxes either).

I was thinking that it had been *months* since my last entry--well, it's only one month.  Just seems longer because we suddenly changed seasons.  Most places you think of seasons gradually shading from one to the other.  Here--one day the students are swathed in hoodies and scarves, and suddenly they're all in sundresses and shorts, and you think maybe you've been in a coma for a few weeks and missed something. 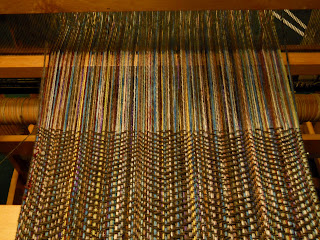 A quick project catchup.  First, the one that isn't going anywhere, sometimes referred to as "the dog on the loom."  Meaning that it's not turning out as planned, and it just sits there.  In my case, I had the idea to take the bits and pieces of some 20 years of spinning--yarn that never became anything else)--and put it on the loom and weave off a multicolor piece of fabric.  The putting on the loom part went fine--and the warp is very pretty.  I thought I would weave with a gray weft--just a neutral to let the warp be the lead player.  But the gray kills it--it's mostly gray with just a bit of multicolor.  Not at all what I wanted.  So I just kept weaving, somehow hoping that what I was getting would turn out to be what I like.  But it's not.  and I don't want to give up that yard of potential fabric, so now I need to un-weave it.  And decide what the weft should be.  And get it spun up (and probably need to decide on a color and dye it).  So there it sits. 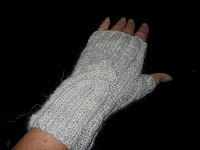 And a couple of small "knit in the car" things.  Another pair of mitts (some people can't stop making socks--for me, it's mitts.  Must be the old Dickens thing--there's just something so Victorian about mitts.  Got away from the lace for a change and did a small cable.   And when I had to spend a day not getting chosen for jury duty, I actually bought some yarn--multicolor) and churned out a simple but pretty swirl scarf.  There has also been another scarf of strange yarn on the needles for a couple of months but I'll write about that when it's done. 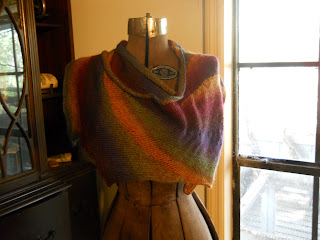 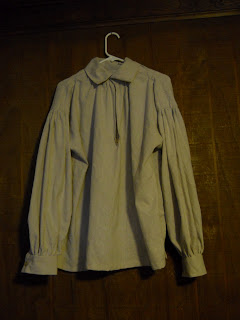 The new education director at the museum needed a 19th century shirt.  There are several places on line that you can buy them--for $50 or $60.  So of course I offered to make one.  Period garments have crazy construction--it's like building a jigsaw puzzle.  Note the tiny triangular insert in the sleeve seam--this shirt has 6 of those in various locations, plus underarm gussets and shoulder straps and inside sleeve bindings.  But it's my idea of fun. 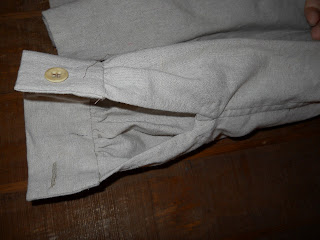 I'm starting to want to get back into sewing.  I really dislike clothes shopping, and more and more stuff is polyester.  But fitting yourself can be tricky.  I do have a "my double" dress form that I custom fit to me--ahem--about 30 years ago.  I don't exactly match it anymore.  So we made a clone.  What you need is old-fashioned kraft packing tape (the stuff you wet to get it sticky--and you have to mail order it because no one carries it anymore), a sacrificial T-shirt, and a partner who is willing to spend a couple of hours covering you in tape.  And who you can trust not to tickle you when you can't do anything about it.  The process is simple but not easy--you has to stand still for a couple of hours while the modeller covers you with three layers of tape, hitting it with a hair dryer in between.  But when you're done, you have a duplicate that matchs you--mismatched shoulders, high hip, round tummy and all.  It will be useful, but it certainly destroys all illusions . . . 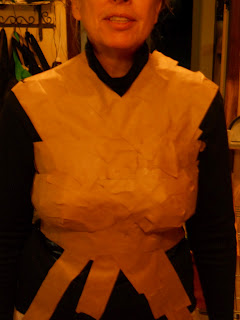 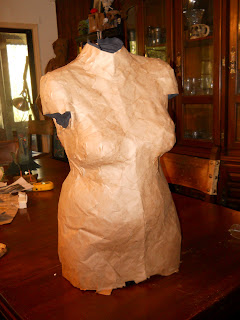 Also in March I had the weaver's guild over for a viewing of some of the pre-Columbian Peruvian textiles.  They are beautiful, and it's good for people who know what they're looking at to be able to see them.  There was much discussion and peering through magnifying lenses.  And did I bring my camera?  Oh, well, here's a shot from the archives. 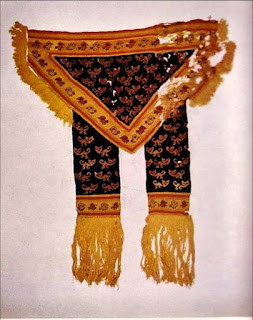 So there's my month.  Will try not to take so long next time.
Posted by Ann at 7:12 PM No comments: