The High Energy Magnet Lab had an open house this weekend,  The faculty and staff volunteer a day for the public to come see the fun side of science--pickles turned into light bulbs (a bit smelly), electromagnet cannons shooting metal rings, and the ever popular potato cannon.  There was a lot of liquid nitrogen around.  For the electromagnetic cannon, cooling the metal rings will decrease the resistance, and they shoot about three times as far.  Dip a flower into it, and it freezes solid and smashes into a powder.  Pour some into a bowl of cream and sugar and you have instant ice cream. 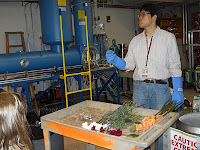 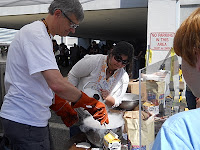 They also had some Telsa coils there.  OK--these were about 3 feet high rather than the 3 stories high that we've seen at the science museum in Boston, but they still throw some pretty impressive sparks.  And the ones in Boston don't have reindeer.  Electric reindeer--useful for guiding sleds on foggy nights. 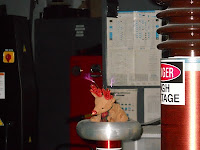 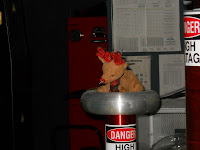 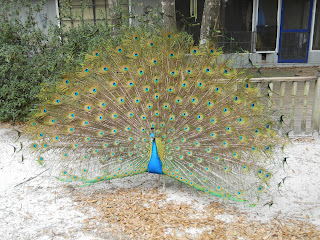 The rest of the country may still be under snow, but spring has sprung here.  The robin are everywhere, the squirrels are nesting, and we're handing out eggs to our friends.

The peacocks are displaying 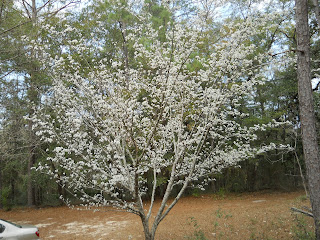 The plum trees are blooming 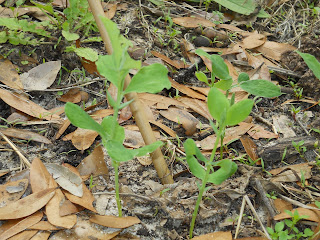 The sweet peas have sprouted 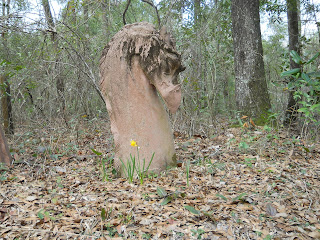 And the guardian dragon has a tiny daffodill.
Posted by Ann at 4:29 PM No comments:

Our niece Amanda and her son came to see her mother (Bob's sister Della) for a few days.  Amanda's husband Rober has gotten orders to Brussells and they'll be leaving in a few weeks.  While we do hope to go visit them there, it will probably be more than a year before we see them again so we went to Mexico Beach to visit.  We had some laughs, told stories about Bob's parents, walked the beach, and played soccer (I told Dane that he'll have to learn "real" football if he's going to live in Europe.  Dane will be 8 years old in May--and has grown a bit since the first time we met him, at a week old and 1 1/2 pounds. 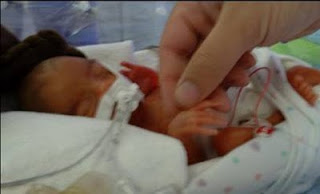 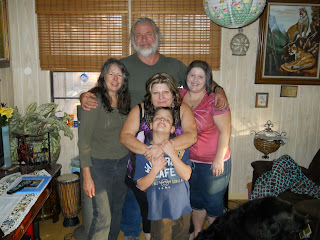 Spring bounded in suddenly--sunny and warm (at least after the sun came up--strange to have lows in the 40s and highs near 80.  We got into a burst of spring cleaning--cleaned and refurbished one of the animal cages, split some wood, Bob put a water faucet inside the butterfly garden so that I can water more easily. I took a broom to the outside of Chez Wicca to banish a year's supply of cobwebs, and even washed the rather green windows. 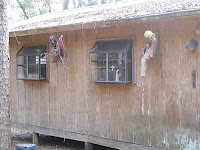 I wanted to dye the white warp that I had a couple of entries ago, but my dye table was covered with leftover Halloween stuff.  So the dye room got cleaned up--and a couple of the props (Skeeter and Blight) are now living outside my little cottage.  Perhaps not everyone's idea of a welcoming decor . . . 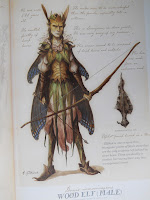 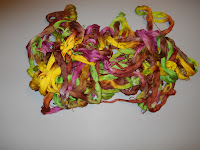 *Then* I could do my warp painting.  My inspiration for the color palette was this woodland elf from a Fairy Field guide I have (I love illustrations in children's books).  Mixing the dyes was a little tricky.  I do know people who are very precise when they do dyeing, and have notebooks of their dye formulas and can replicate colors.  I also know people who follow recipes when they cook.  I am not one of these people.  I just start tossing stuff together until it seems right, and I'm out of luck if I ever want to repeat anything (for some time I had a nice blue/gray blend that was labeled "Warren's mystery mix" leftover from a sweater).  It was particularly tricky because this was a cotton yarn.  I have lots of dyes for wool, but cotton takes a different kind of dye and I had only a few colors.  I had a rust brown but wanted a chocolate brown--so I tossed in a bit of green and that worked.  I wanted a spring green but all I had was emerald--so in went some yellow.  And so on.  Here's the result.  It's a bit on the bright side, but it will be toned down when I weave it (depends on the color of the weft--it will be either brown or gold).  Really want to get started to see what it looks like when woven--but there's a half-finished scarf on the loom that I still need to spin the weft for.  It's always something.
There's still time for hiking.  After all, if this is "News from the Swamp" we should show you the swamp once in awhile! 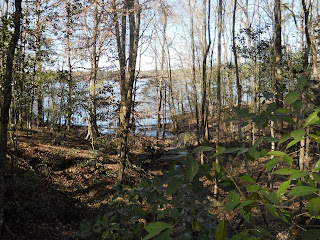 There was an alpaca show at the fairgrounds today so of course we had to go.  Alpacas look like they were designed by a toy company.  And to add to the cuteness, they make a little sound somewhere between a kitten's meow and a lamb's bahhing.  And they are soooooooo soft and cuddly.  I'm amazed we didn't bring one home (it did, however, give me an urge to spin more alpaca) 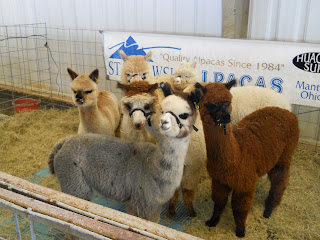 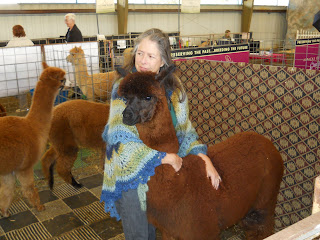 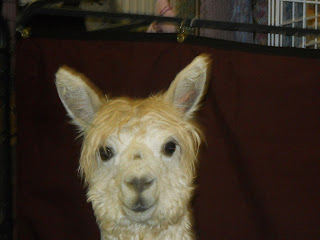 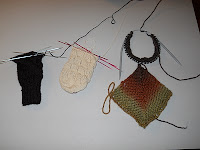 
One one loom, some trim that's been there since August.  Decided that used too fine of a yarn for the pattern to show, so I don't really like it, so it's sitting there.   On the other loom is a mixed-fiber scarf.  In the textile labs that I teach the students are given bags of fiber samples--some we use, and some we don't.  The "don'ts" have been piling up over the years.  Some of them are pretty nice--camel down, yak down, angora.  So I brought them home.  Literally a hundred little bags with a wee pinch of fiber in each one.  It took forever just to open them--for a total of about two onces of fiber which I carded together into a lovely soft gray batt.  For the warp I used some alpaca/silk yarn from a previous failed project--so the entire thing is recycled.  I'm still spinning the weft--using my charkha.  Despite it's small size, it's an amazingly efficient spinning wheel for short fibers.  And a special shuttle makes it more efficient.  Normally you spin yarn, wind it into a skein, then into a ball, then fill the weaving bobbins.  For the charkha, you fill the little spindle, then pop it into the shuttle and start weaving.  Pretty cool. 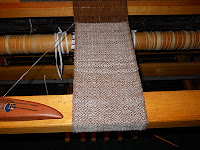 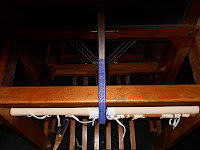 So of course I decide I need to start something new.  I really had fun making the warp painted fabric for the skirt a few months ago and want to make some more.  Never mind that my dye kitchen isn't heated and it's a mite chilly out there.  I at least wound the white yarn, and figured out my palette.  Now to clear off a loom . . . 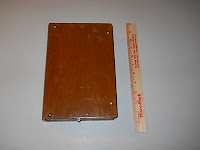 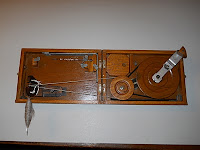 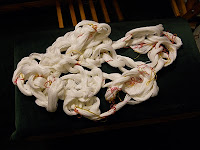 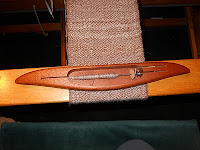 So that's five projects in process and another one started.  With my confessions now out there, maybe I can get the antidote to startitus: finishupitis.  It's far more rare . . .
Posted by Ann at 8:09 PM No comments: 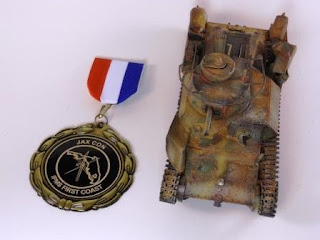 There was a regional scale model conference in Jacksonville this weekend.  Bob has gone in previous years to help improve the finances of the vendors, but he has never entered anything for the competition.  This year his model club buddies and I talked him into entering.  Two models = two first place.  Not bad, no? 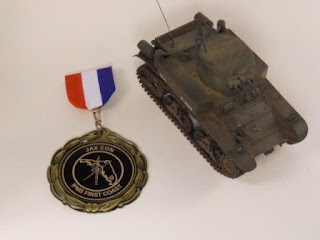 This one  (to the left) was scratch built--meaning not from a kit.  Bits and pieces of various kits, odds scraps, maybe plastic from a credit card.   The next picture shows the setup I used to take these pictures.  It's really pretty simple--a plastic storage box, a piece of paper inside of it, and a couple of clamp-on-lights (and one gooseneck.  Use what ya got).  You need the daylight light bulbs.  Are you listening, Michael?  (My brother makes the most amazing woodworking pieces, but pictures are taken just sitting on the dining room table) 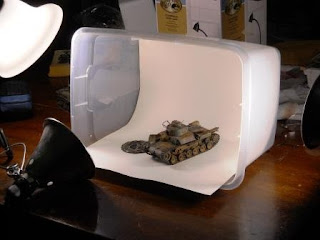 So how does one prepare for an ordeal such as this?  With a nap, of course.  Helps if you have a few friends to join you (they're really not quite that demonic.  Apparently "fix red eye" does not work on cat eye shine from the flash. 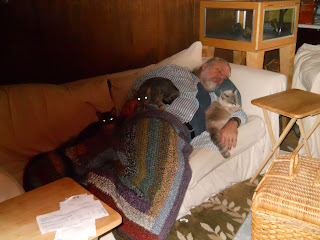