So about the time that the kitchen was getting finished (albeit with a great deal of it still in the living room) the Hauntforum (an online group of people who are obsessed with Halloween) had it's annual "prop under $25 dollar" challenge.

What a good excuse to walk away from the mess and go make another one in my cottage.  At that point I had less than a week to make something, so really no time to design something and then go shopping (while trying to stay under budget).  So I just dug around, pulled out anything that looked like it might become something, piled it up, and waited for something to happen. 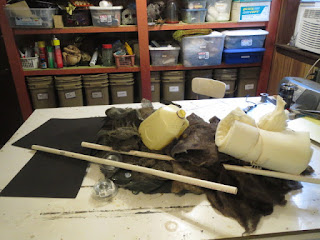 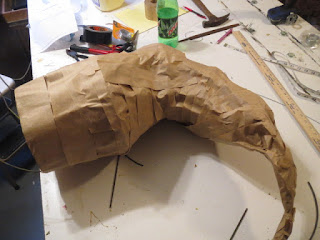 Eventually some water bottles got turned into legs, and some wire became wings, and a milk jug evolved into a head, and some old burlap covered everything.  Teeth and claws were made from hot glue and voila!  A swamp wyvern. 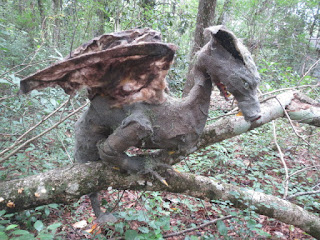 He's kinda cute, and after he was created I was in more of a mood to finish up all the kitchen stuff.  Believe me,  a great deal of the stuff that came out did *not* go back in.  It's actually rather nice to open a cabinet and not have stuff fall out.
And then I had to be an adult.  The baby armadillos really weren't babies anymore--and I let them go.  I usually get a bit sniffley when I do a release, but this time I had a good hard cry.  They were just so darned cute, and so friendly.  But alas--they were ready to go.  They were all playing with me and jumping in my lap and sniffing my ankles, then I propped open the door and they discovered a whole new world and suddenly I no longer existed for them.  But they looked happy. (and we did find a new den the next morning only about 10 feet from their cage) 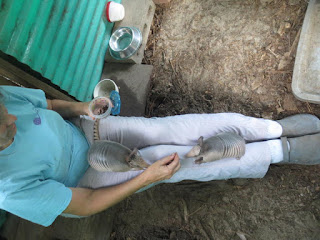