OK--this time it's not my fault that it's been a bit since the last entry.  Internet at the house has been pretty iffy, and it took so long to load a picture that it would time out.  Turns out that squirrels have been chewing our cable line.

So will start by talking about capes.  Our neice Amanda has been taking full advantage of living in the middle of Europe.  Next month, she and a friend are going to the Carnival--in Venice!  (how jealous am I?).  And they wanted fancy capes to wear--purple.  And where does one get a fancy cape or two?  Why, ask Aunt Ann, of course!

Being as I was flattered at being asked--and I think it's cool that something I make will be going to Italy even if I'm not, of course I did it.   And I wasn't about to settle for "gather fabric on a drawstring and add a hood."  No siree.  Gotta be fancy. 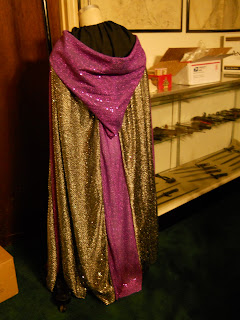 So cape one is silver sequins, with a purple yoke and hood, and inset purple godets.

Cape two fell into the category of "what was I thinking?" (companion to "it seemed a good idea at the time").  It's a purple glitter organza cloud.  Looks effortless--but each little puff had to be hand-tacked into place.  And I was working on a pretty tight schedule, because I had to allow for shipping time to Belgium and really didn't want them arriving after the trip. 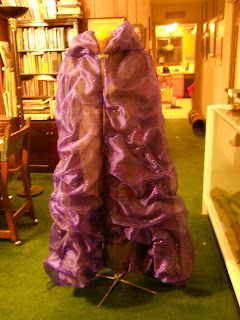 But they made it there safely, and on time.  Amanda--I know you read this.  I WANT PICTURES!
Posted by Ann at 6:09 PM 1 comment: 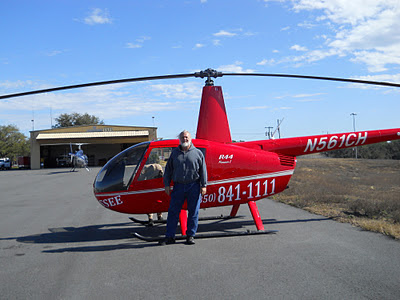 We indulged in Bob's Christmas gift yesterday--a quick trip to Wakulla Springs.  We've been to the Springs a lot--but always in a car, and we view things from ground (or water) level.  This time we popped into a wee tiny helicopter, courtesy of Tallahassee Helicopters.  Not quite a radio controlled helicopter, but not much bigger.

Takin off in helicopters is such a strange sensation.  In planes, even small ones, you have the race down the runway until you get enough speed to finally jump into the air.  In a helicopter, you just have the sensation that someone has a string on a fishing pole and is just picking you and and swinging you where you need to go (I keep thinking of the flying saucers in the old Ed Wood movies).

We flew over the forests--rather voyeurstically  looking down on the houses below--and could glimpse the coast.  Soon we were approaching the Wakulla lodge and the diving dock (hmmm--no one seemed to be swimming today--with the air temps in the 50's, you'd think the 68-degree water would feel warmer than it does in the summer). I have to admit to feeling a little smug because some people on the dock were looking at the helicopter with that envious "that's so cool" look on their faces--and *we* were the ones being cool. 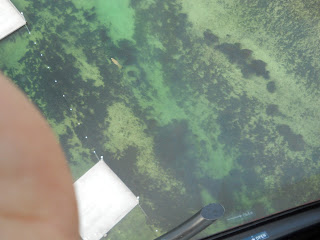 A sweep down the river showed a surprising number of manatees (you can see one in this picture) as well as the more expected alligators and turtles--and a lot of really annoyed birds.  The advertisments for the flight specified "low level" which turned out to be almost treetop height.  We have been to the springs many times, but it's a completely different perspective from 70 feet or so up.

Conclusion--if you have to get from Point A to Point B and time is important, then a plane is the way to go.  For sightseeing--go for the helicopter! 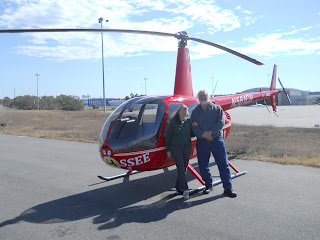 January 4, 1942.  World War II has started and young men will be heading off to fight in foreign lands.  A young couple in love go to the movies--and it's sold out.  Al asks Pat what she would like to do until the next showing, and she replied "get married."  So they did (I must remember to ask the details--did they go find a justice of the peace?  Was the courthouse still open?)

Being good kids who do not tell their parents an untruth--and they had told them that they were going to the movies--they went back to the theater and watched the show.

Would they have ever dreamed that 70 years later they would be able to watch the same movie, now on a little flat plastic disc, on a screen in their apartment? 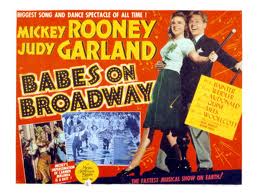 A long, full, rich 70 years.  And yet--Busby Berkeley productions are still lavish, Judy Garland still has a great set of pipes, and Al and Pat are still in love.

The good things last.
Posted by Ann at 6:23 PM No comments:

And we have a brand-new fresh year!

Although making resolutions is a bit of a cliche--and why should we pick one calendar day over any other to get a fresh start--it's not bad to ponder what you'd like to improve in your life.  Mine?

1.  Get over myself.  Too often I find myself doing stuff that I really don't want to do--because it needs to be done and if I don't do it, who will?  And the answer is--if it's important enough, then someone will.  Specifically, I really don't want to do all-day (or all-week) camps with kids.  I don't mind doing hour-long programs, but I find being with children all day to be completely exhausting--the last day camp I did (two days after Christmas) I came home, drank several glasses of wine, and slept until it was time to go to bed.

Teaching--will probably continue to teach  until Bob retires.  Don't particularly like it (mainly because the classes are 100+ students, who don't really want to be there), but lots of people have jobs they don't particularly like.  Bob's retiring in less than three years, and plumping up the nest egg might be a good idea.

But, in general, if I don't think of myself as Mighty Mouse--here to save the day--I can do more of the stuff that I like.  I think the problem with saying "No" is that I'm very bad at asking for help.  If I do finally ask for help, it's an act of desperation.  So I assume that anyone who asks for my help is in a desperate situation.  That's likely not the case--I might just be the most convenient person to ask.

2.  Watch less junk TV.  There are shows that I like (mostly the Cooking Channel) and I don't begrudge the time watching them.  The problem is when I sit there and settle for whatever is on because it's easier than getting up and doing anything else.  Which leads me to

3.  Eat dessert first (metaphorically).  Many times there are things that I want do to--maybe sew, or weave, or read a book--but I don't because I feel I should do my chores first.  When the reward for getting off the couch and away from the TV is that you get to  clean the bathroom--well, you definitely settle for whatever is on the tube.  So the chores are still undone, and I'm frustrated because "I don't have enough time" to do anything I like.  Well--as long as the laundry isn't being put away--I might as well be weaving.

4.  Start a project notebook.  I did this some years ago, and enjoyed it, but didn't keep it up.  I post some works in progress and finished work on this blog, but it doesn't have the details such as size of needles used or patterns or how the loom was threaded.  Like the blog, this would take some time, but it would be worth it.   And I've managed to keep the blog going for a couple of years now--keeping a diary was one of my resolutions, and it seems to be working..

So those are my goals--nothing earth shaking, but we'll see how it goes.
Posted by Ann at 5:25 PM No comments: