Sigh--been a month since the Mike and Margo visit.  Officially summer starts today.  Unofficially, it's been in the high 90's with heat indices of about 104 for the past couple of weeks, and I've been totally knackered.  Normally I like have a job that keeps me outside, but now I just come home and crash.

Rob and Jeff bought a new place (gorgeous--7 acres, pond, a garage that's the size of their current house) and we helped them we painting and moving--the painting part got a little warm because two power companies were fighting over which one serviced their area--with the end result that the power didn't get turned on (and with power comes air conditioning)

And I've been doing some writing but most of it is not particularly interesting.  Some months ago I took over training the new animal handlers.  While there is information I want them to know about each animal, I've been teaching it verbally because there wasn't any written information to hand them.  So I spent about 8 hours writing just about the reptiles (of course, we have 7 species of snakes alone).  I still have a lot to do (names, mammals and birds) but it's a start.

But the SpinningDaily website asked me for another post (and they pay for them!) so I wrote this.  I could do what I did last time and just give a link to the site, but then I'd have to write something else.

Jingle, jingle
Coins while they mingle
Make such a happy
Sound


This little ditty from Mr. Magoo’s Christmas Carol showed Ebenezer Scrooge’s love of money.  He didn’t want to spend it; he didn’t want to use it; he certainly didn’t want to share it.  He just wanted to have it—to know that it there, to run his fingers through the coins, to admire the weight and clink as they fell.


But then there are my gold coins—my basket of yummy spinning goodness.  The basket that I like to open, spread out its luscious goodness,  fondle, and gloat.  Softness in a sometimes harsh world.  Pale gray alpaca, gentle as the creature who grew it.  Camel down and silk—cream and caramel.  A wee bag of qivuit, the last from a trip to , with a memory of spruce-scented chill air.  More alpaca, this time blended with silk in shades of flaming red.   from a fluffy bunny.   Buttery cashmere.  Yak—even the name is funny.  Say the two names, one after the other.  “”, lingering on the sibilant “shhhhh.”   A soothing, luxurious word.  Then “Yak”, sounding like a hiccup.  A hiccup from a long-haired cow.  Yet so melting to the fingers.


I gaze at them, touching lovingly.  And then I put them away.  Like any proper miser, I don’t want to use them.  I want to keep them, to hoard them, to have as my secret haven.


No more.  Unlike gold coins, this glorious stuff will eventually turn back to elemental dust.  I don’t want to be like my grandmother, putting things away “to keep them nice” until they rot on the shelf.  There’s more out there if I spin this up.  Vendors would be happy to send it to me to refill my basket.   Will I lose the memory of an alpaca’s kiss if I spin its fiber rather than storing it?  Is there a law saying I can’t wear a cashmere/silk lace scarf with jeans and a T-shirt, wrapping myself in luxury rather than just gloating over it?  Wasn’t Ebenezer Scrooge happier when he started using some of that gold?


So it’s coming out of the basket.  The cashmere is with a spindle in my purse—what better way to soothe life’s annoying delays then with such an indulgence?  The flame alpaca silk is on a tiny Turkish spindle, bought especially for it.  The angora was spun and plied with a pale celery bamboo and is now a soft shawlette.  Ounce after glorious ounce sliding through my fingers.   And now I have room for more! 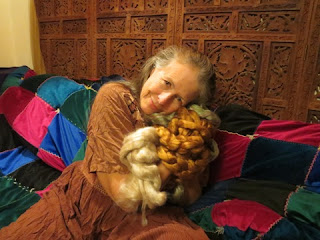