And We All Sat At The Little Table

I have cooked many a Thanksgiving dinner over the years--but rarely on Thanksgiving day.
Back in the day when the family would converge at Chez Durham--and I had to work through Wednesday-- I would find myself coming home from work, staying up late Wednesday doing last-minute cleaning and preliminary cooking, then getting up early to finish preparing.  By the time The Feast itself commenced, all I wanted was for everyone to finish and go home so I could take a nap.
Being as some of the family was retired, and everyone else had Friday off as well, I moved Thanksgiving to Friday.  That way I would do everything on Thursday and be happy and rested on Friday.   That worked out for many years.
Then time did it's thing, removing some family members from the table and making it harder for others to come to our house.  After my parents moved into a small apartment, I took to taking Thanksgiving dinner to them.  As they didn't have a kitchen, and just a small microwave, it was easier to cook the day before and be able to take everything in.  And if one is cooking The Feast, it's nice to share it, so the Day-Before-Thanksgiving party for friends came to be.
And I didn't think to take pictures of the festivities themselves, but here's the next-day shot of the table.  I put on a tablecloth of the finest blank newsprint and toss out colored markers. 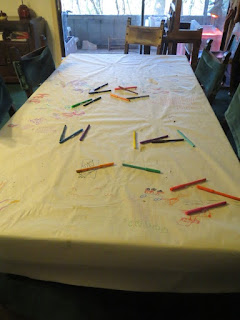 After all, this is not the formal grown-up Thanksgiving dinner.  We're just the kids, having fun. 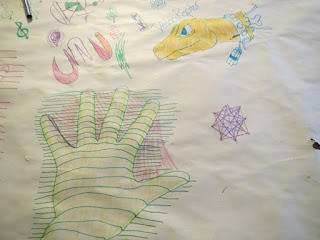 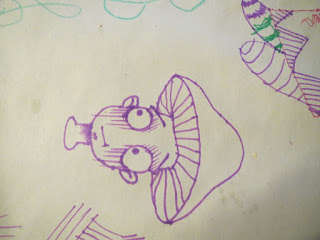 I feel I have to show some class, so at least the salt is served in my great-grandmother's lead crystal salt cellars. 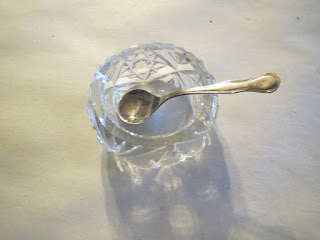 I thought a good time was had by all, until the next day when I was doing the last of the cleaning up, and found this at the place of a friend who had joined us for the first time this year.   Hmmmmmmm . . . . 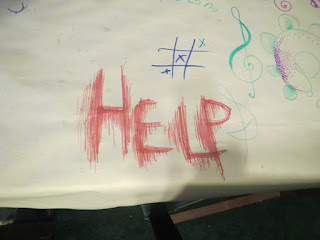 And I had something special to be thankful for.  The hardest part about raising small animals is that you have to let them go.  Sometimes they leave cautiously, poking their noses into the world and then coming back home.  Other times they just run off.  My little stump-tailed squirrel did just that--out of the cage and into the top of a tree and out of sight before I could really say goodbye.  And like any mother, foster or otherwise, I worried.  Would he find food?  Shelter?  Would something else have him for dinner?  Then a few days later Bob looked out and saw this.
﻿ 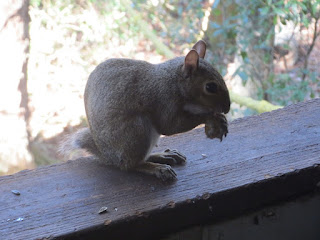 That's my little man.  Now he and his brother come and go, sometimes sleeping in the cage, sometimes not, but coming home for a meal.  They're always welcome here.
Posted by Ann at 9:35 AM No comments:

The year keeps circling around--and Veteran's day and the parade came again.  I didn't take a camera this year--we've been going for many years and I've written about It several times.  But my feelings are the same.  It takes a bit of fuss to be in the parade--the trailer has to be hitched to the truck and the jeep loaded and tied down, and we have to get up early, and I have to put on makeup (can't be Rosie the Riveter without red lipstick!), then you have to drive somewhere to leave the truck and trailer and unload the jeep and drive to the parade staging area, and get there at least an hour before the parade.  Why bother?

And then the parade starts, and you turn down the main street, and you see thousands and thousands and *thousands* of people waiving flags and holding signs that say "thank you veterans" and you realize that yes, one day a year you do have to set aside a couple of hours for this, to remember and thank everyone who has served this country.

And the next day, on a less elevated note, we went to the fair.  It comes once a year, and we go every four or five years, mostly in the middle of the day to look at the animals.  But we were joining a group of friends this year and went at night--and it's been a few decades since we did that.  I'm not really a crowd-loving person, but I told myself that if I were in Oaxaca or Naples I would be fascinated by the native night life. 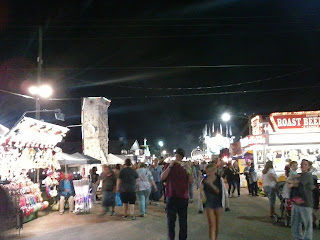 But of course the two reasons that we really went there were to go to the petting zoo (no one would hold still long enough for a good picture) and to eat fried food.  First, of course, a corn dog.  Then we actually ate vegetables (all deep-fried of course, but there might have been a vitamin or two lurking in there), and then we had to choose some deep-fried decadence. 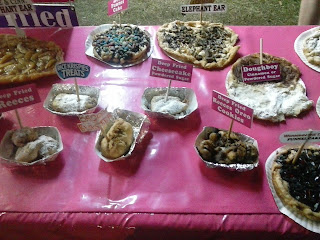 How to choose?  We at last settled on sharing a deep-fried cheesecake.  I wanted more--deep fried twinkies and elephant ears and a funnel cake and batter-dipped deep fried oreos.  Alas--I might have the mind of a 20-year old, but I have a more mature digestive system and had to indulge mostly with my eyes.  sigh . . . . .

Halloween has once again come and gone, leaving us struck down like overripe zombies.

Once again, we did the Haunted Trail.  Once again we overdid it.  Why, oh why?  The Howl at the museum is only for two nights.  All we need is a little scary walk through the woods.  Instead, we spend hours (meaning about 200 hours per person for our main group of four, plus another half dozen people helping to build) building a complex and oddly beautiful trail.  And I think the answer is: because we can.  It's like doing an art installation. And we bask in the glow of art appreciated.  The trail is open for two nights, about 3 hours a night.  6 hours after a month of hard physical labor.  But in those 6 hours 2117 people went through (many of them twice).  The wait was sometimes over two hours.  Personally, I'm one of those people that's not good about waiting in line--if the wait is over 15 minutes I seriously question how badly I need whatever I'm waiting for.  So the fact that a *lot* of people would stand in line for a couple of hours to see something we've made is rather mind-boggling.

What's more mind-boggling is that a large number of people (60+), after waiting all that time, didn't make it through the trail.  Got too scared and had to be escorted off (we provide escort service).  This despite the fact that we keep the trail very PG (we tell people not to bring children, but they do anyway).  No guts, no gore, and just a little bit of blood spatter in only 2 of the 9 scenes.  We strive for creepy, not gross. 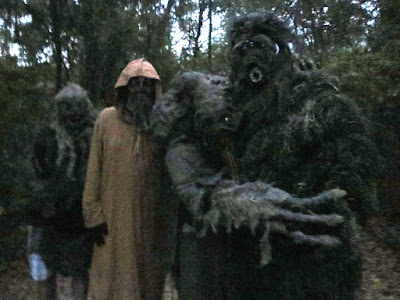 Bob is the tall one in front, I'm the bog monster hugging him, brother Mike in the robe, and friend Allen behind him.

Closeups of Mike and Bob.  I'm really pleased with the masks I made this year.  (Mike paid me the compliment of keeping his--made is a statement ("I'm keeping this") rather than a request) 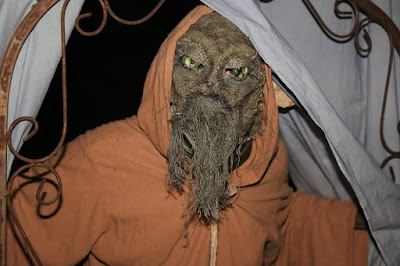 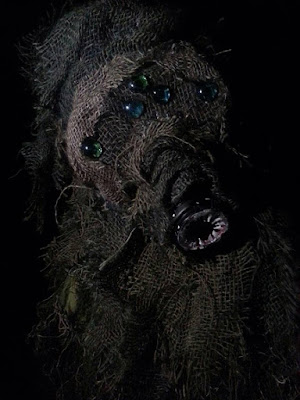 And a bunch of pics of the trail. 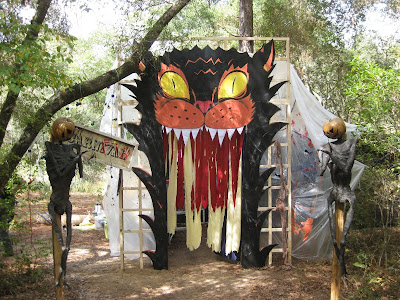 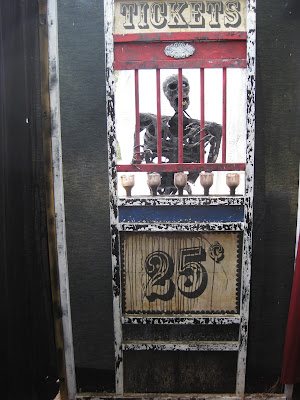 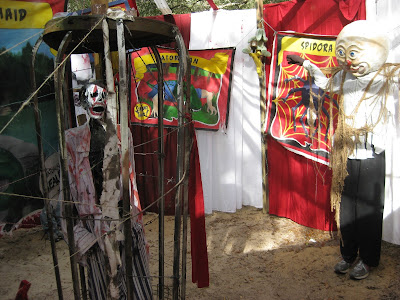 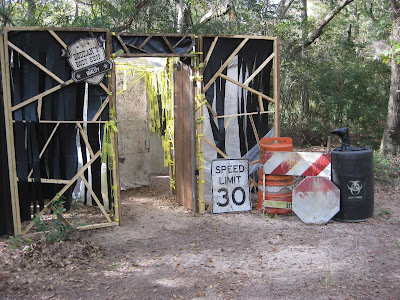 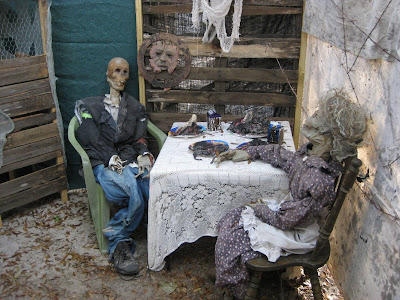 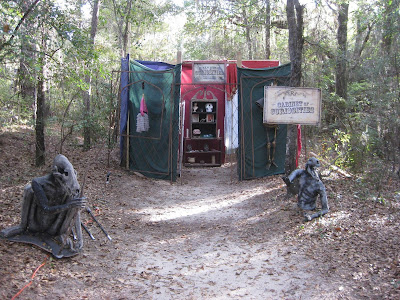 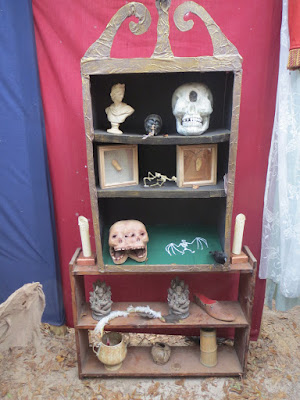 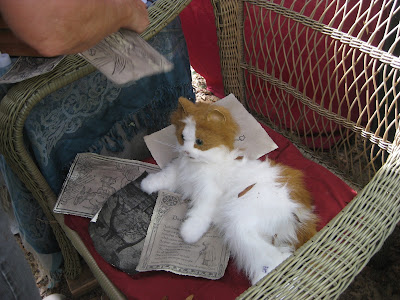 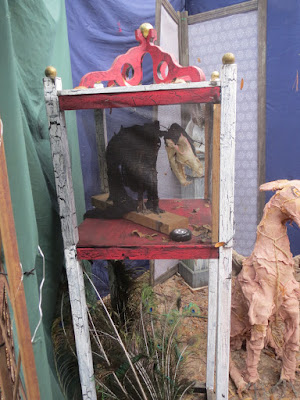 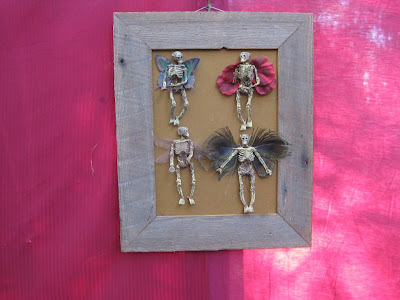 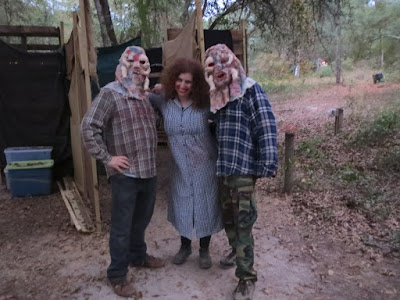 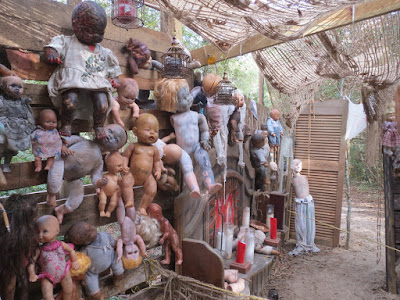 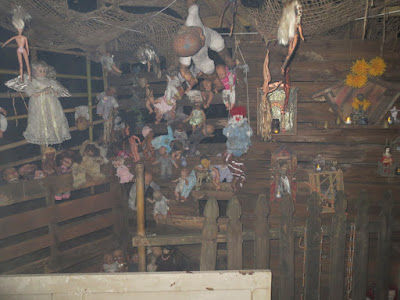 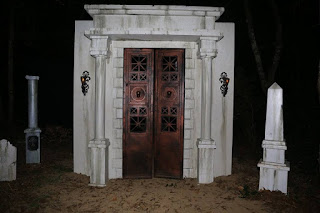 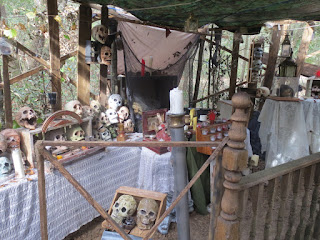 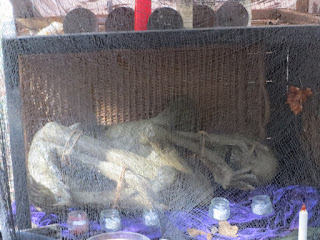 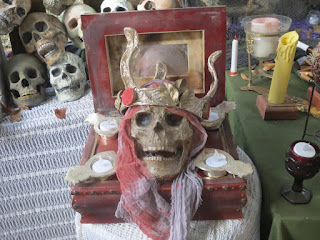 And now the magic is all put away--until next year