Bob and I tend to hang onto things.  We've had out Honda for 17 years and it recently turned over 200,000 miles.  Although it was running just fine, we took it in just to have an allover checkup and tuneup.  It was a bit pricey--a lot of the seals were wearing out, the timing belt needed to be replace, odds and ends.  But worth it, because it's a perfect car for us.

You know that old saying--if it ain't broke, don't fix it?  A week later we're driving and smell that hot oil smell and it's smoking under the hood--and dripping oil underneath.

Nuisance and bother--have to take it to the shop again.  We took the other car so we wouldn't have to wait at the Honda place, but it didn't seem worth the driving to go home and then turn around and come back in to pick the car up (it's a 30+ mile round trip).

It was still early and we hadn't had breakfast, so we went to the coffee shop at the grocery story--and that's where the date began.  After the busyness of the last few weeks, we suddenly had enforced idleness.  There was a Scrabble board there, and next thing we knew we had played for 3 hours!  We did a bit of grocery shopping after that, and pizza for lunch at a new pizza place with wood-fired ovens (crispy crust).

We could have been angry, or frustrated, at their mistake in the first place (turns out that a gasket had gotten pinched when they installed the oil pan, hence the leak) but somehow we had been given the gift of a few hours just to enjoy each other's company.

We've been together for 45 years now--but it's still nice to have a date from time to time.

And the Painting Goes On and On

The professional painting went well.  Then came our turn . . .

After the porch was painted and the new screening put in, we needed a new screen door.  No problem, right?  Go to the store, get a nice white vinyl screen door, and hang it.  Except that the door opening was not standard size--we'd have to cut it wider, or build it in narrower, and make it a wee bit higher.  Sigh.  So we start taking the screen off the old door to repaint it--and discover wood rot.  Yet again back to Home Depot (projects are described by how many trips to the hardware store it takes to do them) to buy a wooden door that we can cut down to size.  Do that, paint it, hang it . . . maybe we should have cut it just a wee tad narrower . . . take it down, plane it down a bit, repaint, and hang.   At least the front door was easier--and we even had a nice, low-humidity day to do it.  Here's the before and after porch 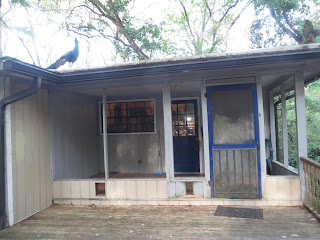 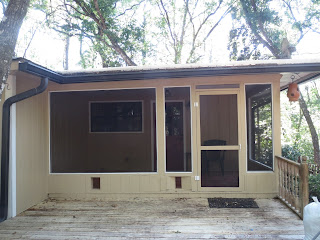 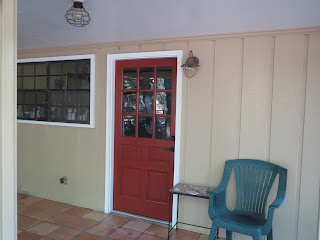 And it feels more open now--the contractor said that the middle supports weren't really necessary so out they came.  Now the porch isn't quite done--the old storage units aren't going back in and what we want is a bench or two with storage but haven't found them yet.
Meanwhile while all this was going on I taught two more workshops.  First one was handspinning (again, no photos, but I carded up all that pretty dyed wool from the last post that we didn't use for felting and used that for the spinning).  Then a workshop on making worbla--a mixture of thermoplastic and sawdust.  It's much used by cosplayers, but I've never experimented with it because it's *way* expensive.  Then I saw a video on how to make it.  I figured that other makers would be interested.  It's fun stuff to use--I've started on a bird mask. 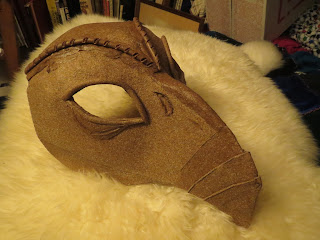 Despite the fact that I have enough spinning fiber on hand to last most of the rest of my life, and that I had a few other things I should have been doing (like paint the back deck) I found out that a farmer in Quincy had babydoll sheep and fleece available.  I've never worked with this breed before, and every now and then I get the urge to work with a raw fleece rather than wool that's been processed and ready to spin.  And it was a lovely day for a drive, and the people were great, and the sheep adorable. 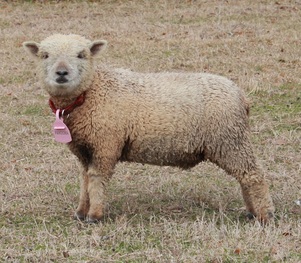 I came home with 12 pounds of fleece.  Apache and Wilhelm helped me sort through the first batch. 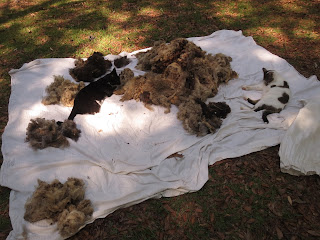 The second batch will have to wait--we lost our excuse for not working on the back deck.  We didn't have the painters do it because, well, honestly, we have a lot of stuff (I really want to say crap) back there, and chickens living there (special need chickens) and the living room is already full of the stuff from the front porch.  And besides--we had a wren nest with babies out there.  So obviously we couldn't paint until the babies left the nest.

But, alas--it happened.  And we were lucky enough to see the fledging.  This grand moment is exactly that--a moment.  It takes only a few minutes for the parents to coax the young out and into the trees, so it's something we rarely get to witness. 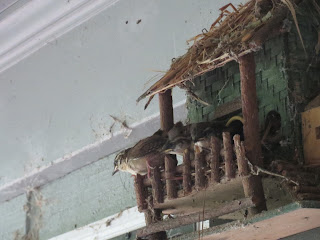 With the excuse having flown the coop, I've spent the last three days sweeping down cobwebs and painting.  It's been gratifying to see a transformation but not much fun--the temps are in the 90's and the biting flies are out (the mosquitoes I can ignore, but those damned flies . . .)   I still need to do the trim and ceilings.  I was going to start with that--and I did--but ran out of the first can of paint and when I went to open the next found that we had accidently bought interior rather than exterior paint.  We went back today to exchange it and their power had been out--no computers means no sales transactions.  Fortunately it came back on.

This will drag on a bit more--I'm working the next three days and getting a crown on Monday so not much painting will be done.  And then, of course, all the crap has to be organized (trust me--much of it is going away)

But still reading.  Finished American Gods--complex and convoluted and thought provoking.  Then read one of Gaimen's "Dr. Who" children's stories, which was simple and straightforward and fluffy.  The guy is amazing--he can write in all formats (including poetry and "graphic novels" which we used to call comic books)

Now I've started W.H. Hudson's "Far Away and Long Ago."  This month's Smithsonian had an article on him and praised his beautiful and evocative writing.  Ah--the joys of the e-book--I thought it would be interesting, pulled it up, downloaded it, and started reading.  While it's not the same as holding a real book, I have to admit it's convenient and doesn't take up any shelf space.