One of these days I'm going to go to a "normal" wedding--bride in long white dress, groom in tuxedo, bridesmaids in matching unattractive dresses.  But probably not--that's just not how my circle of friends and family rocks it.

Bob's sister got married last Saturday.  She's been single for 21 years, but has been dating a truly nice guy for many years now, and they decided to make it official.  The venue was small, just a little wedding chapel in downtown Panama City, and some family and friends.  Della, being herself, chose red and black for her color theme.  Her daughter Amanda was her maid of honor, and her grandson Dane gave her away.  I love weddings like this--small and personal.

And I open with a sight very rarely seen--me holding a baby.  This is Amanda's second son, 9-month old Zeke.  I don't know if the kids are my grand-nephews or my great-nephews.  I opt for great-nephews because they're great kids. 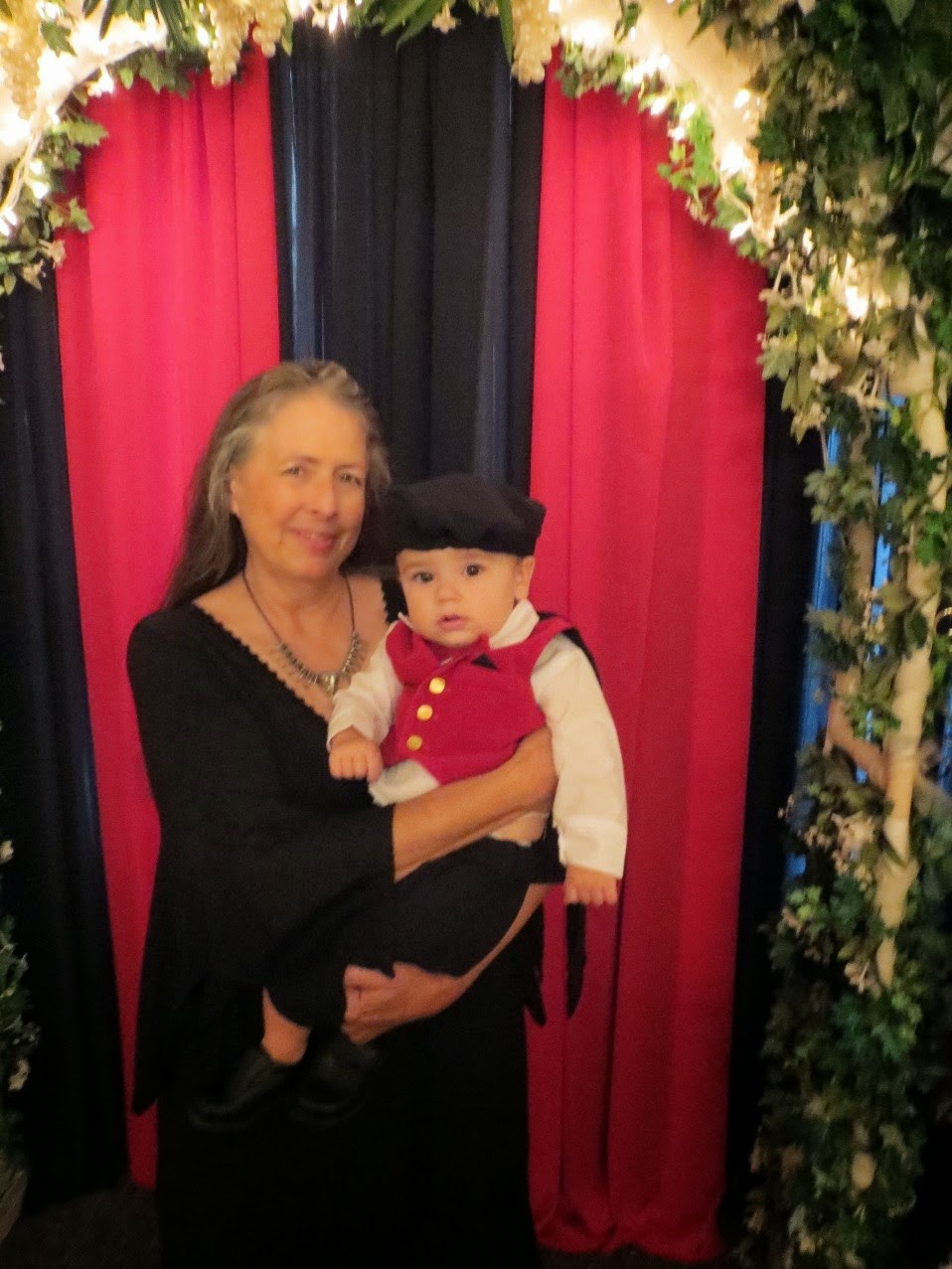 Here's niece Amanda and her other son Dane 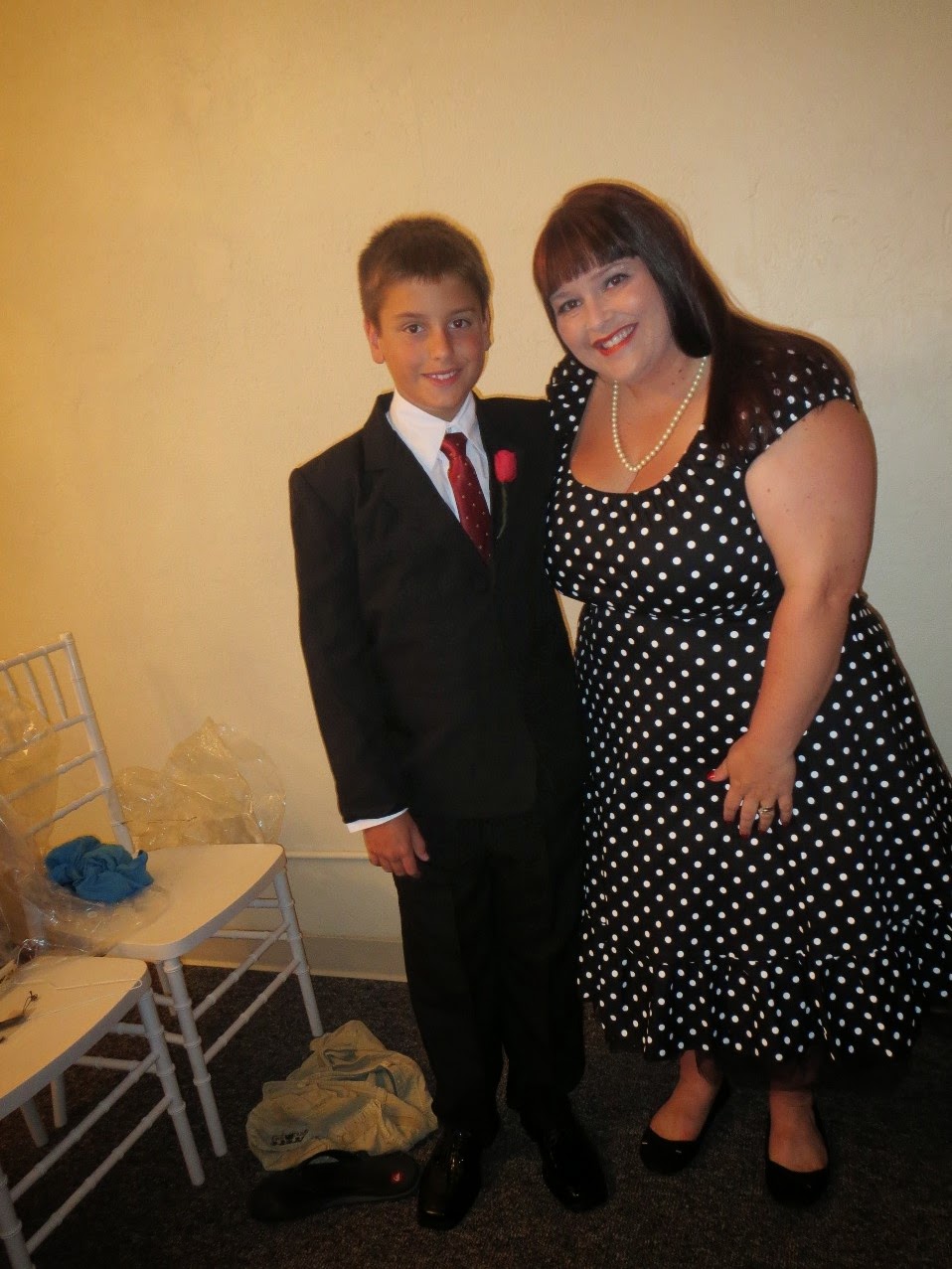 Both Della and Amanda wore very red, very high heels.  They came off immediately after the wedding. 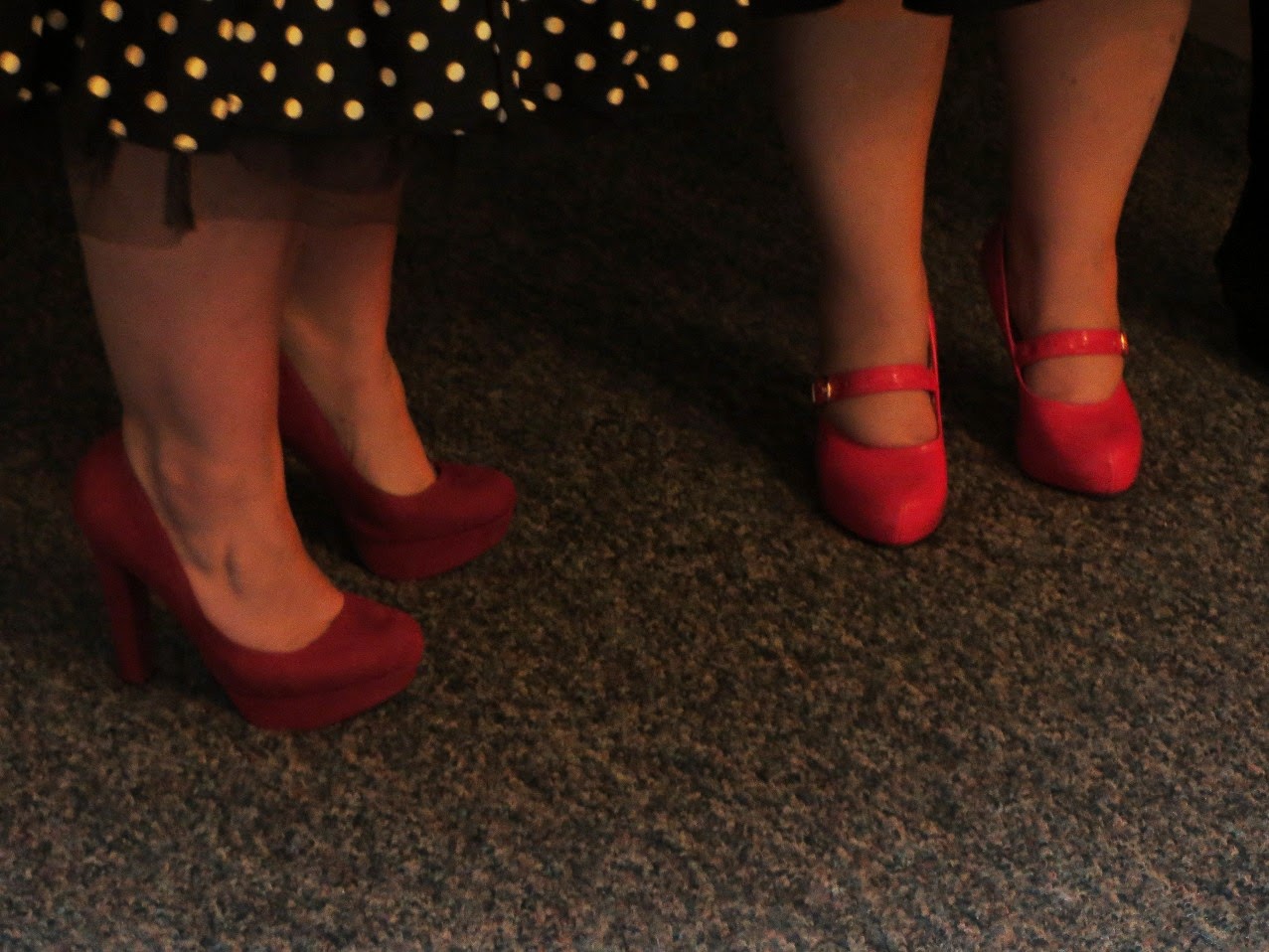 Am I forgetting anything?  Oh--yes.  There were a bride and groom: 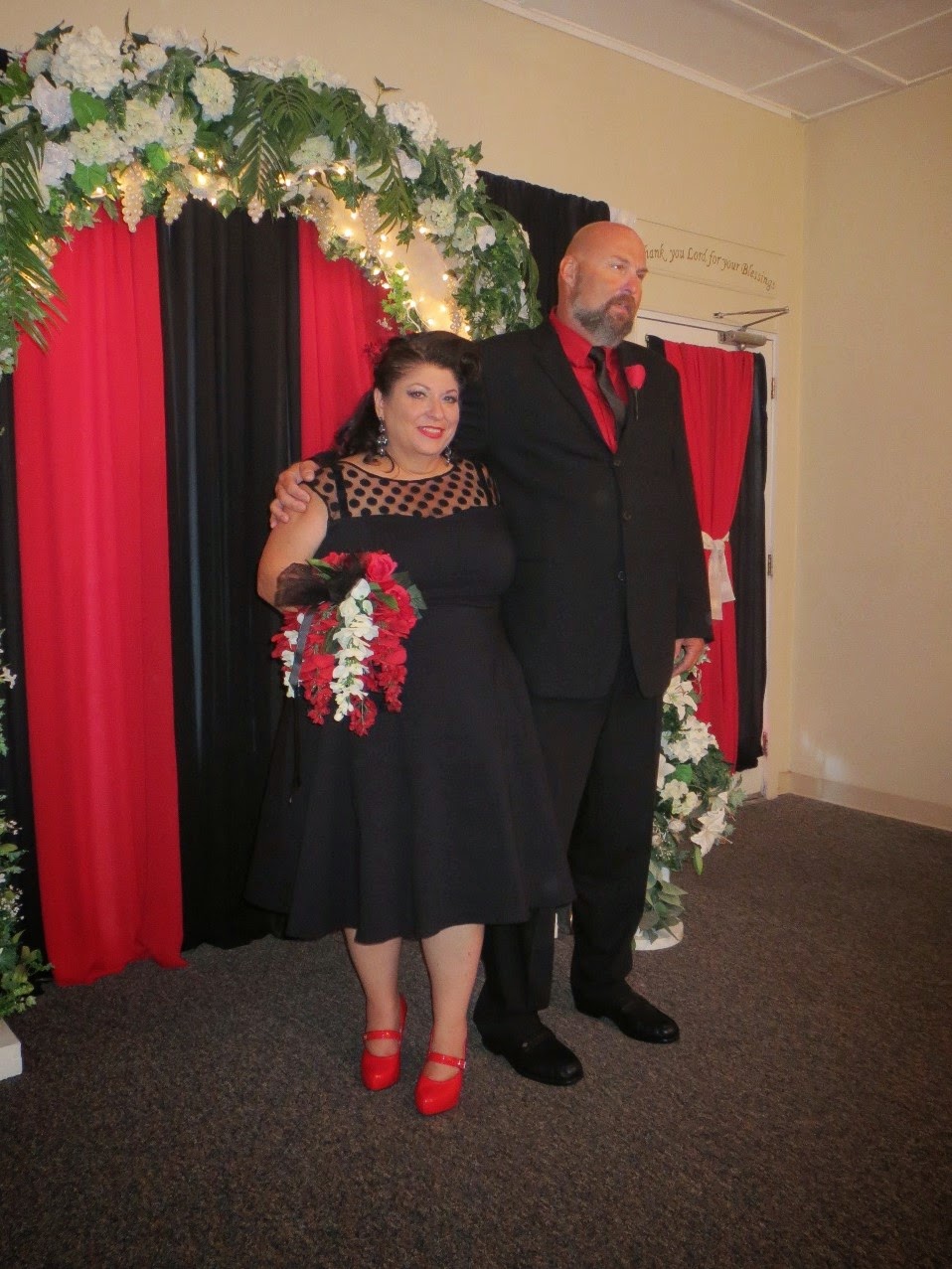 After the ceremony we traipsed across the street to a redneck bar for the reception. 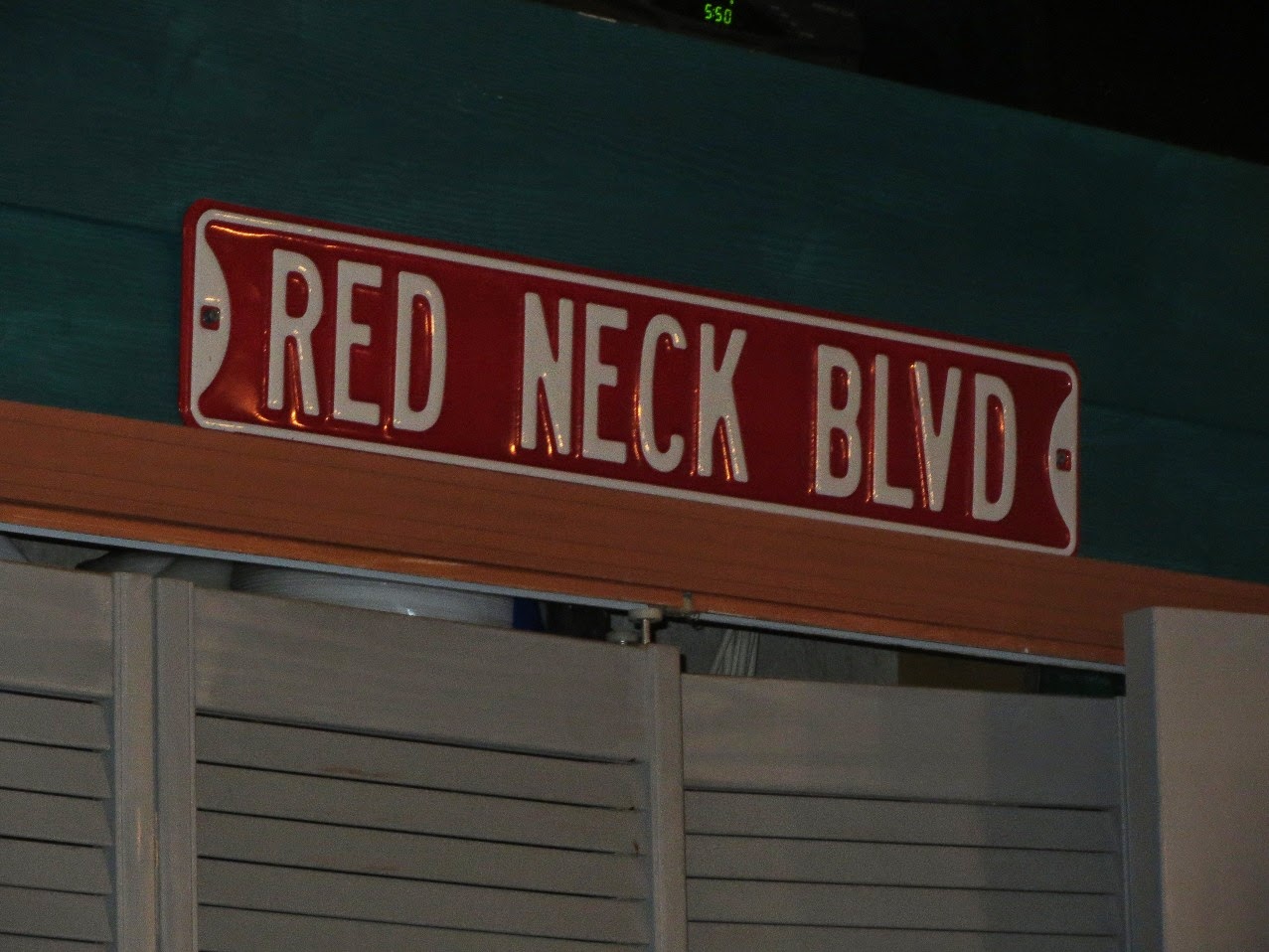 The cake, like everything else, wasn't quite traditional, but it was beautiful (and red velvet cake--yum) 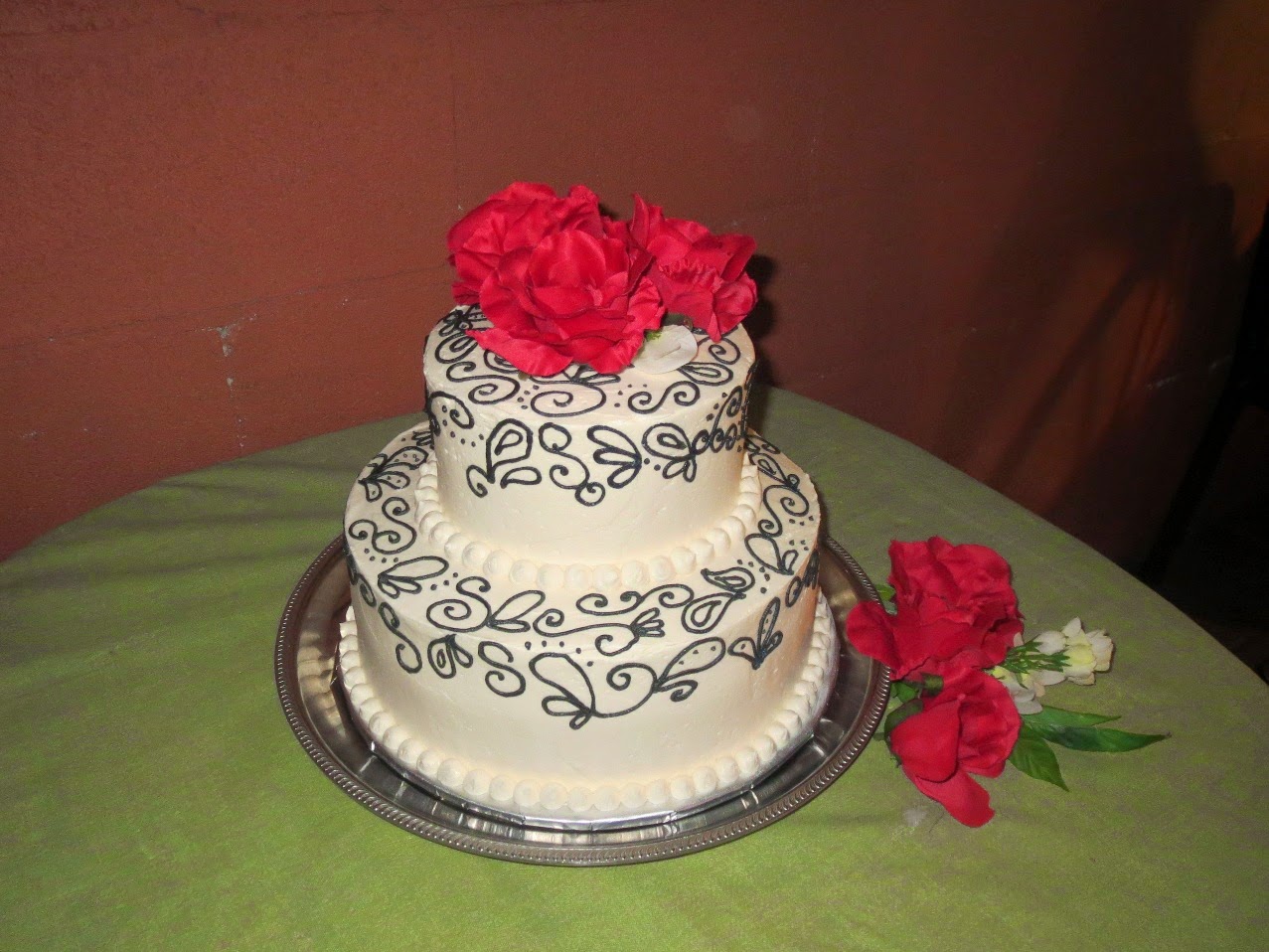 It was a beautiful and loving day, and I'm so happy for them.
Posted by Ann at 3:38 PM 1 comment:

My sister-in-law Margo once asked me "Don't you ever take time off to sit, relax, maybe read a book?"  Well, of course.  Sunday was my lazy day.  Saturday had been busy (that will be the next post) and I discovered that there was a Harry Potter marathon on TV.  I love those movies--the costuming, sets, and props are just so visually rich.  And despite scoffers, there are first rate actors (Maggie Smith, James Broadbent, Michael Gambon).  So I sat and watched the last three movies (which took about 9 hours).

Of course, it's possible to do something and watch TV at the same time--and there are commercial breaks.  So, while zoning out at Hogwarts, I:

Made some jesses (ankle straps for the hawk) 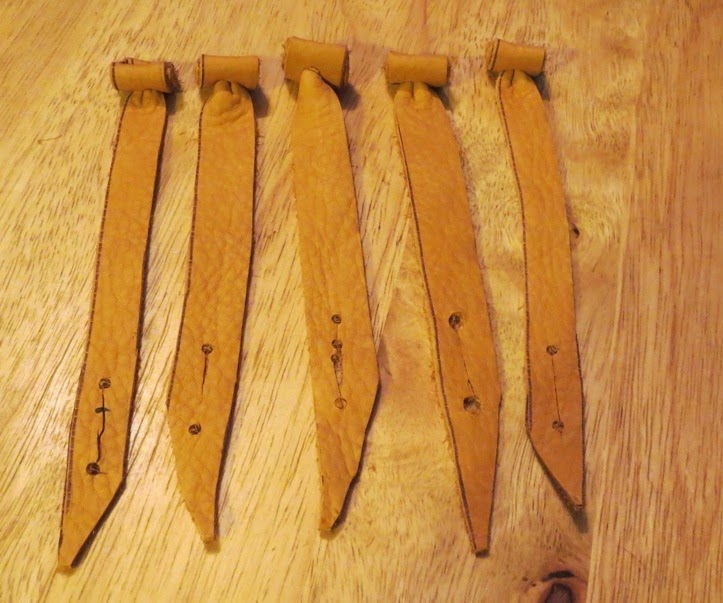 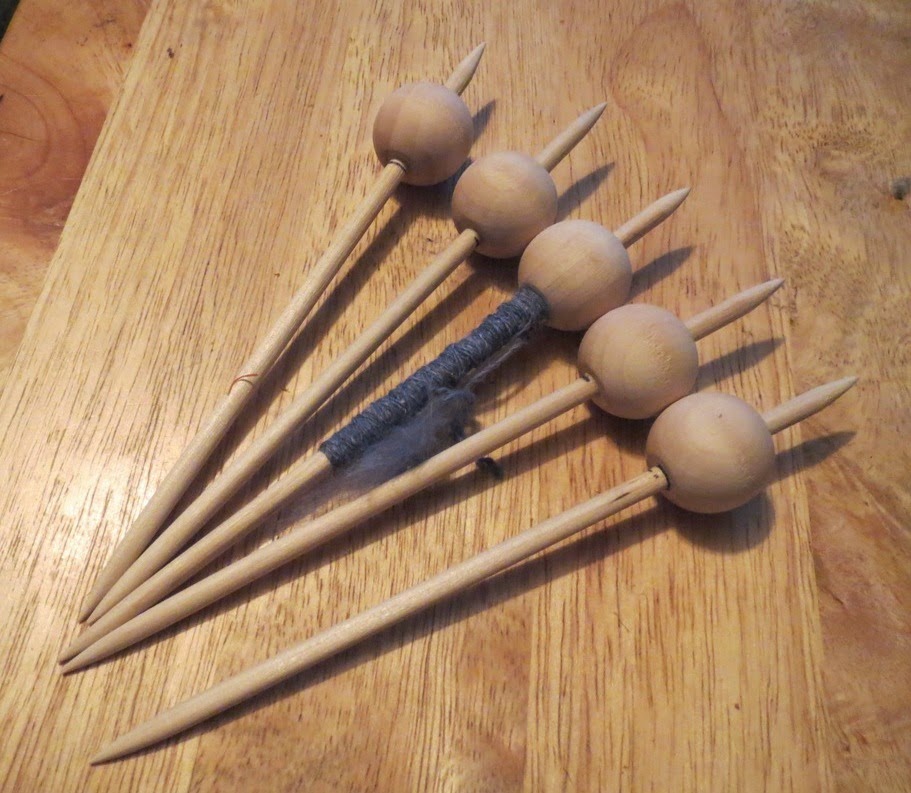 Plied and washed a skein of yarn (the actual spinning was done on a handspindle while doing my daily walk--yes, sometimes I multitask).  The colors are very pretty but subtle--the picture really doesn't show it)

Spun another skein of yarn

Knit a mitt for my father (his hands are always cold, and his current mitts are getting a little shabby) 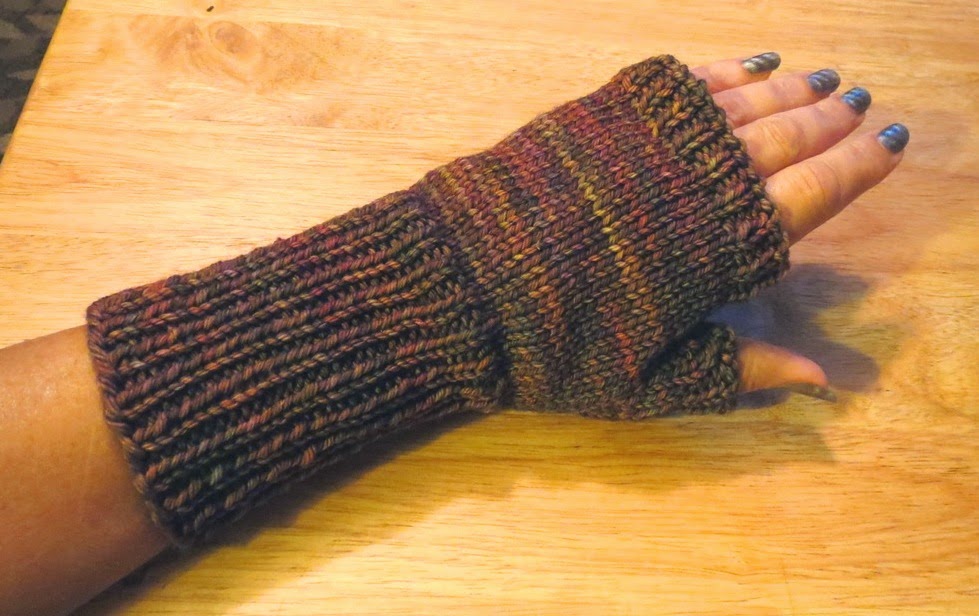 Not pictured, but the overage of ripe tomatoes got turned into some incredibly delicious sauce (team effort - Bod did the straining).  I also baked some bread to go with the resulting spaghetti and meatballs.

Alas, one does not get too many lazy days.  Today I had to go back to work, giving a program on reptiles 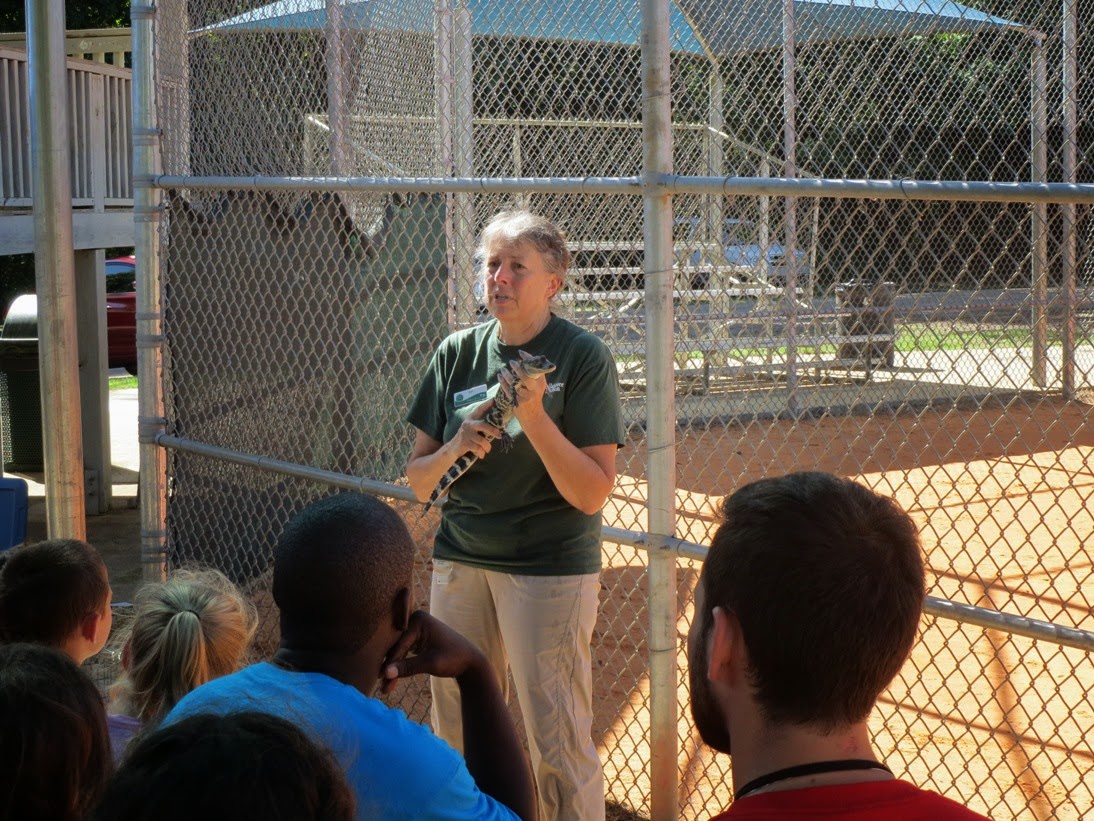 And, as too often happens, I got to demonstrate how alligators like to pee on me 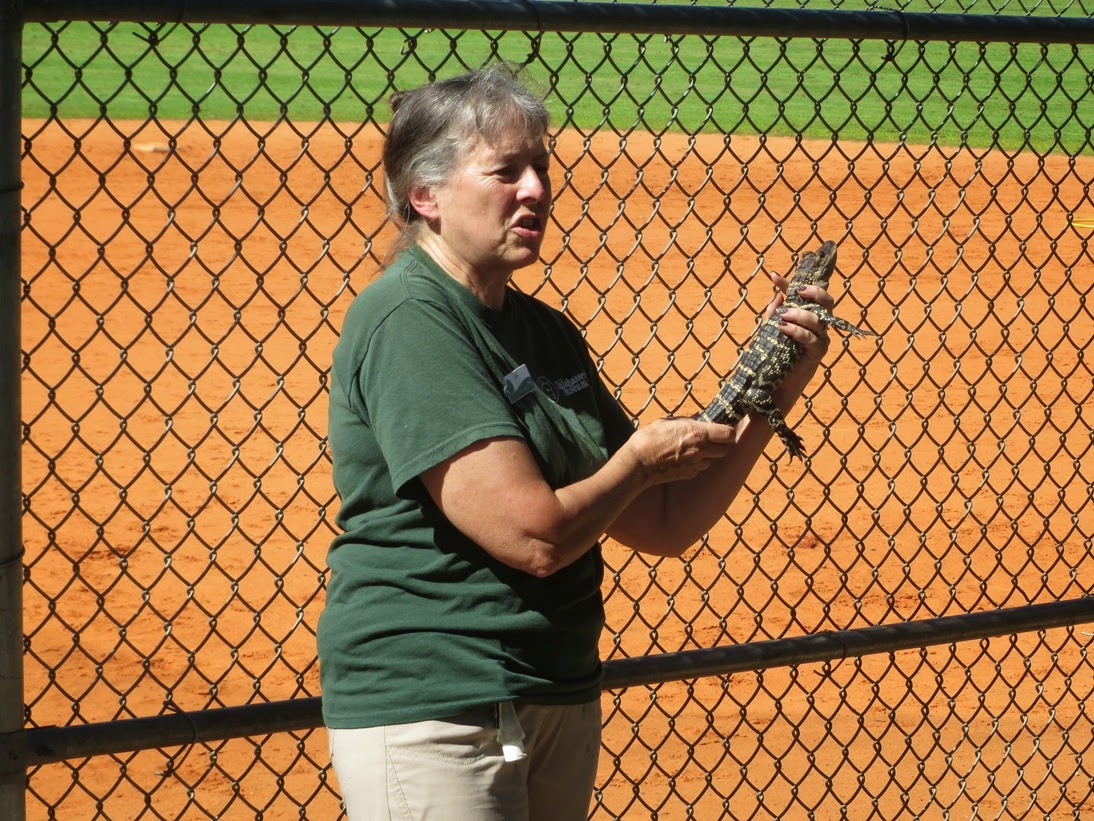 Back home, we still can't resist following the cats around with a camera.  Here is Apache--who would really prefer to be an only cat, wants nothing to do with any other cat, does nothing with other cats except to a) run away from them, or b) hiss at them.  He is the ultimate solo cat. 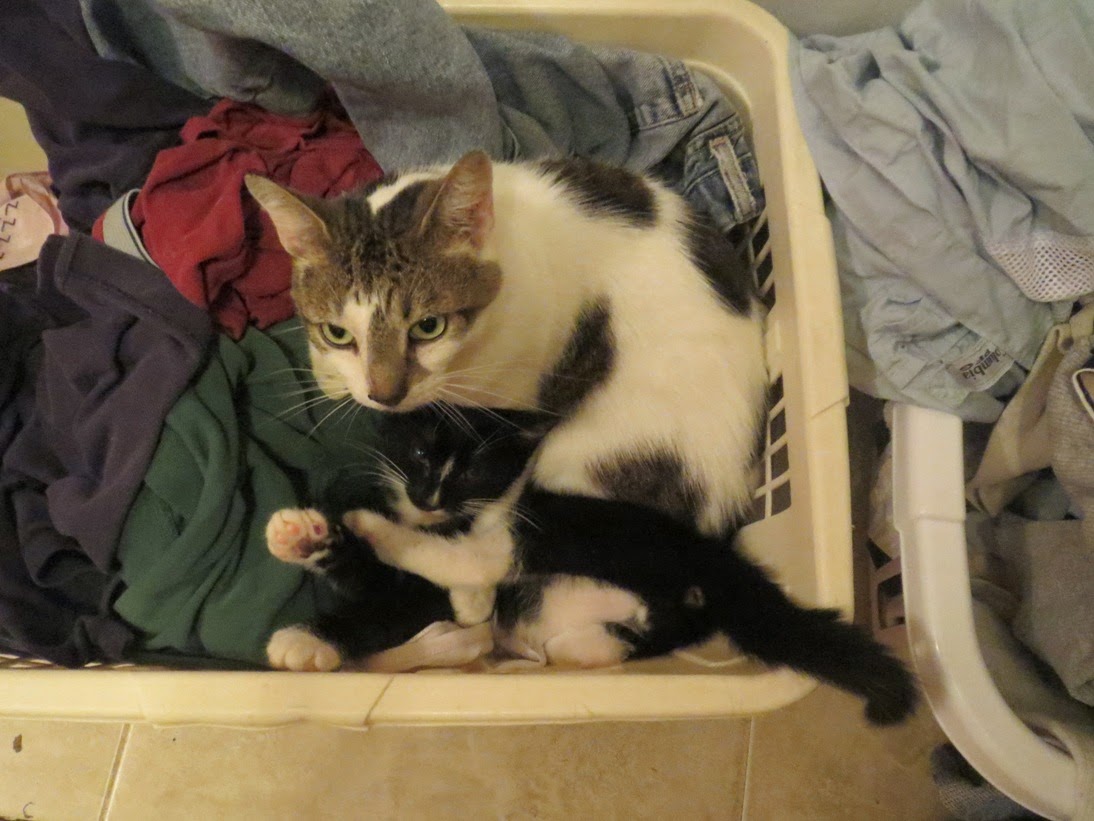