I do like it when my life and interests tend to swing around.  At one time I might be coaxing a recalcitrant hawk onto my glove, and that evening be knitting delicate lace.  People ask if I'm a biologist and no, I'm a professor of historic fashion.  I decided years ago that I'm a generalist, not a specialist.   I like having a wide variety of interests (even if it means a wide variety of detritus scattered around the house)

So this month we went on two outings (no, we usually don't get out much.  We have too much fun at home). 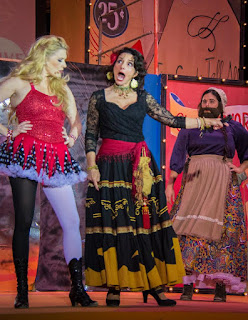 The first was the annual Chain of Arts in the Park--several blocks of art displays.  For which I forgot to take my camera but still enjoyed looking at everything.  Alas--this year nothing called my name enough to come home with me.   Then we wandered over to the outdoor amphitheater for the annual Shakespeare in the Park.  This year it was "Comedy of Errors," one of the Bard's fluffier works.  It takes quite a bit of that "willing suspension of disbelief" to believe that two sets of twins would be separated as infants but for each pair one would be the servant to the other, they would both have the same names, and when they end up in the same town they happened to be dressed alike.  What made this one particularly fun was that it was set as a 50's carnival, complete         with jugglers and acrobats. 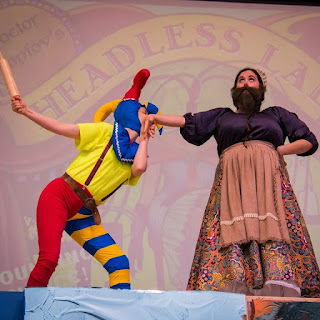 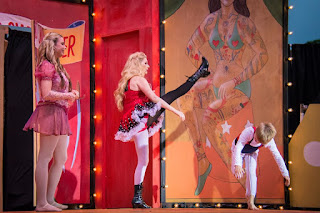 Yesterday we drove to Ocala (about 3 hours) for a sheep and wool festival.  That's a bit of a drive for a rather small gathering, but I don't get to go to many (they're not that common around here).  Bob gets excited when there's a gun show coming to town--which happens 4-5 times a year.  I get to a wool festival maybe once every 4-5 years.  At first we thought we'd never get there--we were unaware that there was a convoy of heavy equipment on the interstate, so our first 90 miles were done at 40 miles per hour.
Then when we did arrive, a quick glance showed us that this was a pretty small gathering.  If we trotted quickly, we could have seen everything in 20 minutes.  But then we had that glorious feeling of slowing down--we didn't *have* to see everything in 20 minutes.  We could take our own sweet time.  And being people who are more interesting in process than product we enjoyed seeing some behind-the-scenes demo.  For instance, I've often watched sheep shearing, where the expert shearer can strip of a fleece in only a few minutes.  Like this. 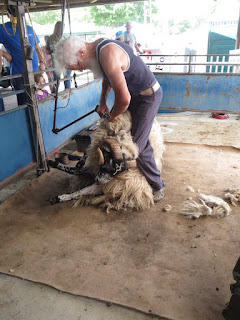 But when I've tried doing that, it's ended up being a epic battle with a struggling sheep, the anguish when you realize that the wool isn't supposed to be red, and finally a sheep that looks like it was shorn with a dull grapefruit spoon.  Yesterday we got to watch someone being taught how to shear--where to place the feet, where to brace the knees, how to maneuver the animal and keep the skin taut so you *don't* nick it.

And there were the sheep dog herding demos.  Which I've seen before and always love--the dogs are so focused and intent on their jobs, and there is such communication between the dogs and their handlers.  But all the ones I've seen before have been with well-trained dogs and sheep who are used to them and know what they're supposed to do anyway.  This time they showed dogs with different levels of training (from pretty new to doing pretty well to the expert) with a flock of sheep that wasn't used to dogs.  It may not have been as smooth and perfect, but it was more real life.  We especially liked a final showdown between the expert dog and a particularly stubborn ewe.  The dog eventually won (even though he got butted a few times) by backing her into her marked area, one step at a time. 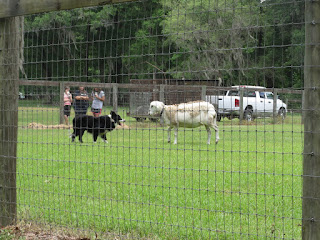 And of course, there were vendors.  Well, a vendor.  And I *had* to buy something.  Buying online is OK and what I usually have to do, but you can't see/feel/fondle/play with something before you buy it online.  And although I have a pretty good collection of hand spindles, and enough fiber to last the rest of my natural life, I did come home with some camel down and a new little Turkish spindle. 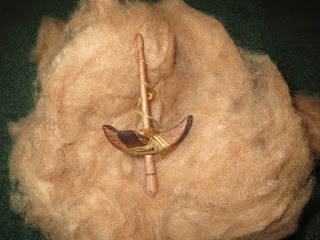 I should have put a quarter in there for comparison.  It's 4 inches long and weighs 8 grams (that's a little over a third of an ounce for those who don't speak metric), which is actually not my smallest spindle.  Wee spindles are good for spinning wee fine yarn, which is what I usually like to do with fine soft fibers.

And as a bonus for Bob, there was a pretty good scale model hobby store just a few miles (well, 12 miles) away from the festival, so he got some booty as well.  Come to think of it, he spent more than I did . . . . .

After a few annoyingly hot days (almost 90!) that made us think that summer had moved in, the weather decided to give us a reprieve and another couple of weeks of spring.  Beautiful clear skies (mostly--it's raining right now), warmish weather with nice breezes.  We're trying to soak it all in before the summer really hits and drives us into hiding in the air conditioning.

So the usual spring stuff such as getting the summer garden in. Eat up the greens before they bolt, put in the peppers, tomatoes, and eggplants--and cotton.  I always plant a couple of beds of colored cotton, mainly because I think it's cool that it grows in colors other than white.  And I've actually started doing something with it--but that's another post.

We took at long walk out at St. Marks--and as is required by some sort of Florida law, took a picture of an alligator. 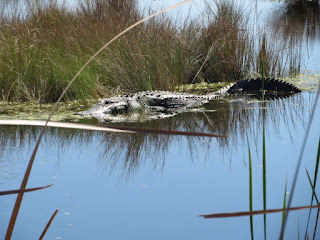 After all of my swearing at the loom while wrestling on the warp, the weaving itself went rather smoothly and I now have a fresh set of dishtowels.  (Although I'm keeping my first ones--I made them at least 15 years ago and while a bit stained, they're still holding together.) 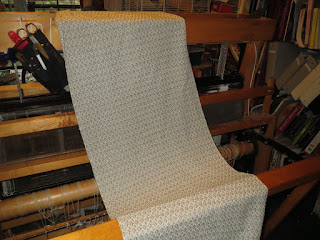 Oh, the times I don't think to bring my camera--or even my phone.  The local Red Cross had a fundraiser called "Cocktails and Camo" and asked a few people to bring out their old military vehicles--including Bob's jeep and me as Rosie the Riveter.  Usually these things aren't really that interesting--we just hang around and babysit the jeep.  But at one point I was inside polishing off dessert (they fed us as a thank-you--I always appreciate being fed) and realized that Bob had been outside for awhile.  So I stepped out--and he had a collection of the Tallahassee Roller Girls (local roller derby) in the jeep!  That sly old fox . . . .   But, alas, no pictures (and they were really cute--1940's glam outfits with serious knee pads and skates).  And facebook has failed me in my search for photos.

And, of course, there's my version of spring.  For most people, spring looks like this: 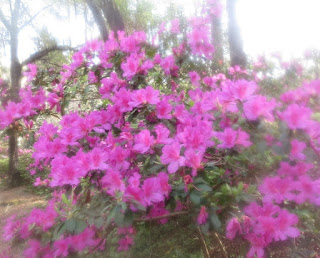 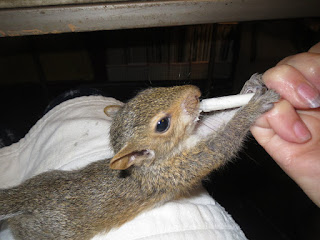 I've been fostering baby squirrels for a few decades now, and you'd think I'd be over thinking how stinkin' cute they are.  But no . . . I always look forward to having a few around (I've got 5 at the moment).  But the spring gods were smiling upon me--they were actually fairly well along, with fur and open eyes, so I could (for now) forgo the joys of the 2 a.m. feedings.   That will undoubtedly come later.