And there goes another year.  Looking at the  pictures on the camera I found a few things that haven't made it into the blog yet.

Pershing Rifles.  When I left home for college back in '71, I was of course a bit homesick.  And the world was big (There were more students in some of my classes then there had been in my entire school).  So, just to find My People, I joined the ROTC--after all, I had been around the military my entire life.  Women in ROTC were new--this was the first year that female cadets were accepted.

But it was still not My People--the majority of people were in ROTC because it was a way of avoiding going to Viet Nam.  Still in search of My Tribe, I pledge the Pershing Rifles, an ROTC organization.  Pledging was hard--I was the First Woman Ever to pledge, and some people didn't like that.  And the pledge program was very demanding.  But I liked the people, made some good friends, and eventually married one of my pledge brothers. 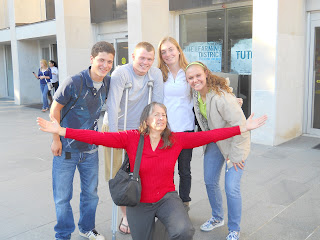 Forty years later, I find that I am an Icon.  Part of the current pledge training program is to learn that Florida State University had the first female member in history.  And every couple of years the pledges are sent to find me--to poke me and see if I'm still breathing, and to tell stories of the Good Old Days.  So here I am with this year's crop of pledges.

Apache:  if you look back at the blog posts for March 2010, you'll see pictures of Graemalkin in her basket on the counter--we had given up the battle of "try to keep the cat off of the counter" and not only put her basket up there, but built a set of steps so she could get to it.  Alas, time took her away from us.  But we didn't move her basket--somehow it was a shrine to a tough little cat that we both loved. 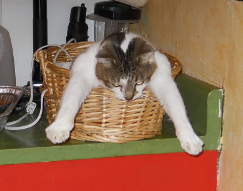 Well, maybe a shrine to us--but it looked like a comfy bed to Apache.  Cats are such opportunistic creatures.  So, once again, the bed (with the heated pad) has a fine cat to sleep in it.  This odd pose is a favorite of his. 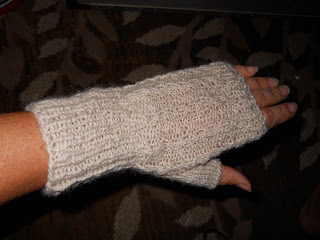 And Projects (and I swear I took pictures before they went off to recipients, but don't seem to find them).  Despite the busyness of taking over a class, I did manage in the last month to spin and weave an alpaca scarf, knit another alpaca scarf, make a set of finger tip towels of handpun cotton (a gift for my boss at the Museum who is retiring--the cotton was grown on the farm there), and a pair of alpaca mitts (I at least got a picture of  those).  I've got another warp ready to go on the loom--but that's another post.


Birds, revisited:  A couple of posts ago I wrote about seeing thousands of birds when out kayaking.   It was so breathtaking that we went to the same area again, just to see if it had been a fluke.

No fluke--it's a winter roost, and once again we sat enthralled as birds beyond imagination came flying in.  OK--so Bob had to take a shower when we got home--it's a small price to pay. 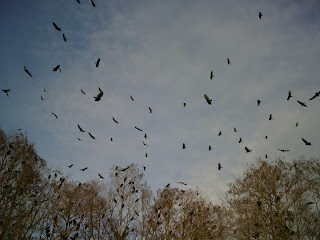 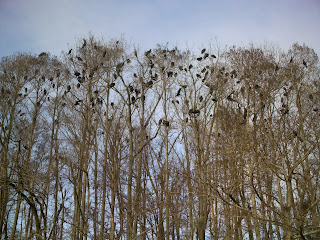 Much of the holidays are about tradition--about maintaining a continuity with the past in an ever-changing world.  Maybe it's aways having the same ornaments on the tree, or singing carols, or even saying "bah, humbug" and going to a movie.

And sometimes traditions can be new--you do something one year, and it somehow feels right, so you do it again the next year, and by the third year it's a tradition.  For us--that's meat pies, sherry, and watching "Hogfather."  Hogfather is a book/movie--and being as the book is 350 pages long and the movie 2 1/2 hours and both are pretty convoluted I won't even try to summarize.  But the key point is that the Hogfather (Santa Clause) isn't able to make his rounds, and people are no longer believing in him.  So Death steps in, dons a red suit and fake beard, and tries to take his place, because it's vitally important that belief in the Hogfather is kept alive.

Which begs the question of Why?  Why do we want children to believe in Santa Clause?  According to Death (the ultimate observer of life) it is the belief in things that don't exist that make us human.  And you have to start off with the little lies (Santa Clause, the Easter Bunny), so that you can believe in the big lies like Truth, or Mercy.

"Then take the universe and grind it down to the finest powder and sift it through the finest sieve, and then show me one atom of justice, one molecule of mercy."   And yet we have to believe these exist.

So, in the world of the Hogfather, the little kids leave out meat pies and sherry (and turnips for his pig) and in late December we make meat pies and pour sherry and are reminded why we have to believe. 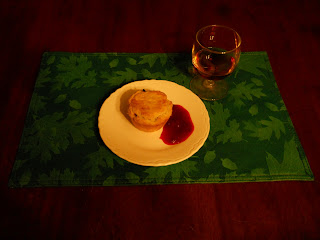 A much older tradition for me is fruitcake.  People are mean about fruitcake--it's given as a joke, sneered at, regifted.  Me--I like fruitcake.  I even like store-bought fruitcake although I rarely eat it because I make my own (and everyone knows it so I don't ever get one for a joke).

This started about the time I was 12 or 13 and in my Dickensian phase--and The Christmas Carol is full of words like "redolent" and "heady" when describing fruitcake--when that luxurious richness of fruits and nuts and brandy epitomized all that was Christmas.

And then there was Truman Capotes "A Christmas Memory"--with a young boy and his elderly cousin trudging from door to door buying raisins and oranges and whisky.

And so, using a recipe clipped from the Tampa Tribune (they started running that recipe annually sometime around 1950--wonder if they still do?) I made fruitcake.  And have made it every year since (gak!  45 years now?)  It's a white fruitcake, with commercial candied fruit.  I have since found recipes that I like better, with dried fruit and spices--but I still have to make that white fruitcake, or it just won't be Christmas.  It's made in early December, then wrapped in run-soaked muslin to age.

So I've always made it.  When I was in college and went to visit an aunt for Thanksgiving I confused her by saying I had to borrow her kitchen to make fruitcake.  When Bob and I were first married and the purchase of candied fruit and a dozen eggs and a bottle of brandy used up most of a week's food allowance--I've made it.  When we were moving one year shortly after Thanksgiving and were involved with packing and boxing, the fruitcake got made and the cloth-wrapped loaves carefully packed and transferred.

Some people like it--mostly my family because it's been family tradition for 45 years.  Bless my sister-in-law--she's been family for "only" a dozen years, but admits that she's always liked fruitcake.  Others--not so much.  My other sister-in-law and my neice have let me know that "I don't have to give them any of that stuff."   My father-in-law adored it--he would greet us at the car when we came home for Christmas with "where's my fruitcake?" and proceed to cut a big rich slab and eat it in three bites while standing over the sink.   I had his fruitcake ready the December that we lost him, hoping that he could come off of the ventilator to enjoy it.  And thus began a new tradition--like setting a place for Elijah, the first bite of fruitcake each year is a toast to him.

So be it meat pies, fruitcakes, mistletoe, or hanging a pickle on the Christmas tree, enjoy your traditions.  And have a Merry Christmas!
Posted by Ann at 7:15 AM No comments:

A couple of weeks ago Saturday was a beautiful day--maybe a bit warm for December standards, but clear and blue.  Early afternoon we decided to take the kayaks out to the lake.

Normally we head out from the landing to an area we call "the flats."  But it was later in the afternoon than we usuallly go out, so instead we opted for the closer "Iron Curtain".  Not quite certain where that name comes from--it's a line of cypress trees that go almost from one side of the lake to the other, and have formed their own land mass with their tangled roots. 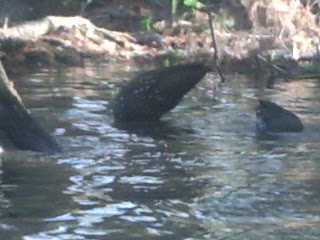 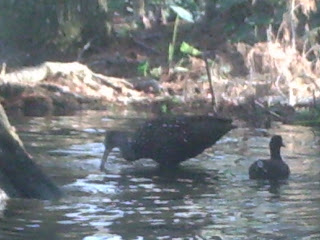 It was a great day for birds--anhingas, cormorants, moor hens, galanules, herons. Bob watched a young ibis and a moor hen fussing at each other over what must have been a prime spot, then gave up and upended together (sorry about the somewhat fuzzy pictures--we take a waterproof camera out on the kayaks and sometimes the picture quality isn't great).

Although it was only about 3:00 in the afternoon, a lot of birds were coming in to roost.  I pointed out a dozen black vultures sitting on a branch to Bob.  Then I looked among the tangled roots and saw another dozen or so vultures.  About that time some groups of cormorants were flying in.  Then more.  And more vultures.  We saw dozens.  Hundreds.

We craned our heads back and looked up to see a scene out of Hitchcock's "The Birds" -- vultures circling overhead and spiraling down to the trees, flights of cormorants streaming in.  The sound effects were amazing--not only the grunting, cawing, screeching, and honking, but the crashing of the branches and the sound of wind whistling through a million feathers.  The trees were thick with the birds jostling for space.  One inviting gap in the tree roots had a polite lineup of vultures taking their Saturday night bath.

Words and pictures cannot descripe the wonder of this experience.  Sometimes you have to travel to the ends of the world to see something like this--and sometimes you just have to head out to your own backyard. 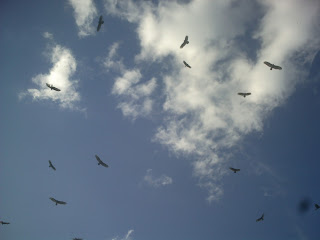 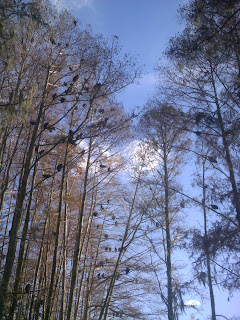 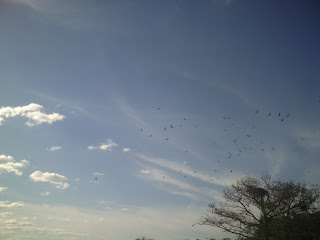