I actually did a post in October with Zack the Zombie--but it seems to have disappeared.

Now it's the middle of November--what happened?

School started.  Two new preps--classes I haven't taught yet, so takes a lot of time to get the lectures together (nothing more boring than a teacher who reads notes).  The guy teaching the labs that go with one of my lectures quit, so I got three of them--which means teaching for almost 7 hours straight on Tuesdays.

The Howl happened.  And my volunteer coordinator bailed on me.  It was the biggest and best haunted trail ever--because it was our swan song.  We ("we" meaning Bob and I and our friends Rob and Jeff) love Halloween, love the challenge of doing the trail, and we burned out.  So we decided this is our last, and we made it a good one.  We also ran almost 1900 people through it in two nights.

Pictures will eventually get posted but for now here's one of the aftermath (celebrating in the tent afterwards and suddenly the big pile of discarded costumes looked pretty comfy. 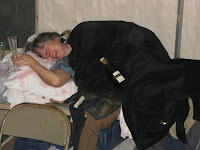 Of course what goes up must come down--We got the trail cleared within a week, but I still have a house/barn full of trail stuff being sorted and packed.  Maybe finished by tomorrow. 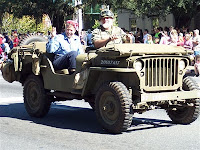 Meanwhile time marches on, and veteran's day arrived, which means Bob and I (as Rosie the Riveter) were in the parade.  HUGE crowds--estimated over 25,000.

I'm finally getting back to some spinning/weaving/knitting and indulged in a new toy.  It's a yarn swift (holds skeins of yarn for winding into balls)--much fancier than it need to be to be function, but I've been eyeing this for awhile because it's so beautiful.  As long as I've had to spend so many hours teaching the labs, I thought I'd get something pretty with the paycheck. 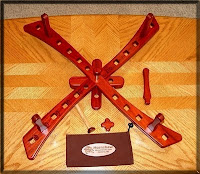 I'm a little rusty with this writing thing now--practice will improve!
Posted by Ann at 6:09 PM No comments: