'Tis said that how you spend New Year's day will predict how you spend the rest of the year.  I certainly hope not. I've got a major case of the flu and have spent the past four days dragging myself from bed to couch.  Bob has taken over making the traditional beans & greens for our New Year's Day dinner (which turned our really well--probably because he put in a lot more ham than I would have)

But at least I will start the year with a blog post.  It will not portend a year of being focused and organized, because I'm just looking at the pictures on the camera and seeing what I haven't posted about yet.

Me and the Goose 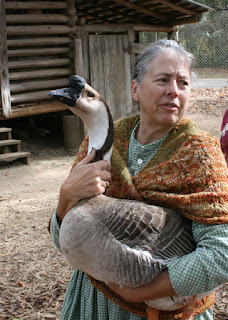 The morning of the Fall Farm Days at the museum I heard people yelling "the goose escape!"  I ran over--sure enough, our new, very large, male swan goose was out of the pen.  Geese can be dangerous (being "goosed" is not as much fun as it sounds) and I hadn't officially met this new one.  My plan was to keep him cornered (and people away from him) until someone from the animal department could capture him.  So I chased him proper farmwife style, flapping my apron.  He merely looked confused.  I sidled up to him, carefully patted him as he honked at me, and finallly picked him up.  Turns out that Maynard is a very friendly goose who likes being handled.

Again at the museum--our Christmas on the Farm.  We had various craft tables, and I (who always think about fiber and yarn) thought it would be fun to have kids make Ojo de Dios--yarn wrapped God's Eyes.   How were we to know that it would turn out to be one of the most popular crafts?  At any given times I had a half-dozen kids wrapping yarn around sticks--we made dozens and dozens of the things.  There were probably a lot of Christmas trees adorned with Ojos this year. 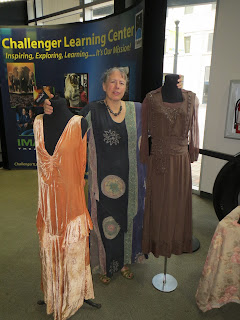 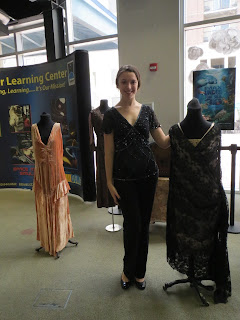 WFSU had a big fundraising premier to kick off the new season of Downtown Abbey.  The show is set in the 1920s, so I set up a display of 1920 clothing.  Fortunately Eliza (the Rosie the Riveter of a few blogs posts back) came out to help me, as this was the day after I had helped make the dozens of Ojos de Dios and I was rather sore.  The clothing was interspersed with some great antique radios, and the whole display was very well received.  Fans of the show got a kick out of seeing "the real thing" up close.


A Bit of Color 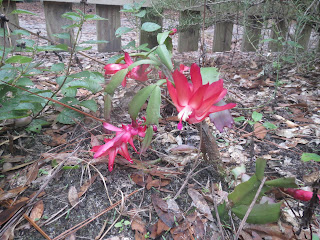 Late last spring my mother handed me a slightly sad Christmas cactus that someone had abandoned.  I can't say that I babied it--the best I did for it was offer it some ground space in the butterfly garden.  The butterfly garden is treated with benign neglect--it gets watered occasionally, and weeded a couple of times a year, and whatever lives, lives.  So we were surprised to catch a glimpse of red flowers--just in time for Christmas!

I've been busily knitting for the Christmas season--but of course couldn't show pictures.  And forgot to take some.  But I finished Dane's sock puppet dragon--of course, by now he's probably too sophisticated for such things.  So kid--it's OK if you regift it, or stash it in the back of a drawer (we also sent him a catapult model).  I also made Amanda a couple of warm alpaca scarves and hats.  If I'm correct, this picture was taken in Paris! 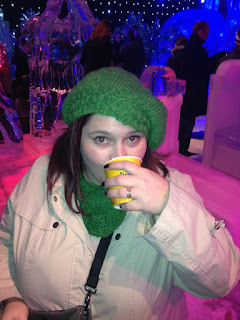 I had mentioned in my last post that being given a perfect day, we took off and enjoyed it.  The next day we ("we" meaning mostly Bob) got onto the delayed project of replacing some broken boards on the front deck.  Jeff came out to help us--and with three people nailing the boards were quickly in place.

To thank Jeff for his help I took him out for some quick afternoon kayaking.  He and Rob had sometimes wondered that Bob and I tend to kayak almost exclusively on Lake Talquin (why not?  it's right here).  I think now he understands.  Especially since the bird in the picture is a limpkin--close to being an endangered species. 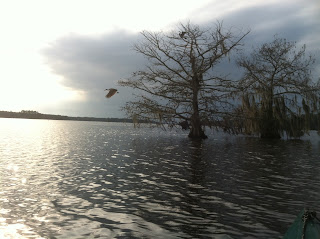