Mike and Margo and Bob and Ann

Hard to believe that it's been over a week since Mike and Margo left.  They came last week just for a (too short) 2-day visit.  Margo's son Rich lives in Atlanta; they had flown there for Mother's Day and drove down to visit Bob and myself and Dad.

Mike *finally* took me up on my dare to take him on the Tree to Tree adventure. As his little sister, I was going to drag him on the entire two-part course and whop his backside.  But I am also a good hostess--the weather had turned hot (in the 90s) and he was going to have to drive (or at least) ride back to Atlanta--and I made the command decision that we were going to do the lower course only.  He thought I was wimping out at first--until he finished it and decided that it really was enough.

It's not the obstacles that get to you, and definitely  not the zip lines.  It's the fact that you have to keep ducking under the shoulder-high safety lines--so the lower course alone makes you do 30-something deep-knee bends.  After awhile, your knees and thighs are not your friends.

For some reason, Bob and Margo elected to stay on the ground.

Here's Mike on his first set of steps. 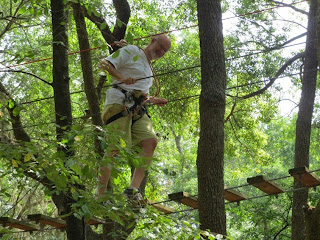 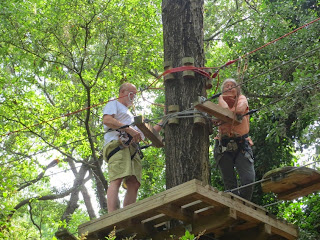 And the two of us gazing down at the groundlings below 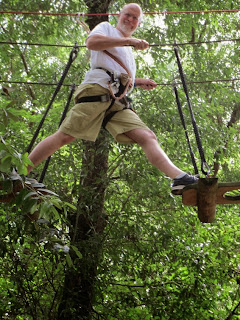 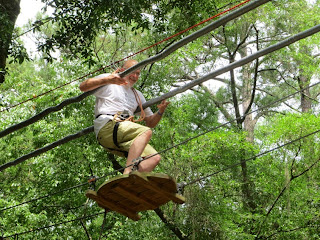 Mikey on the surfboard 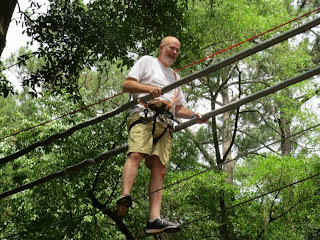 Mikey wondering why the surfboard left him behind 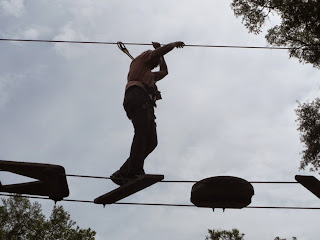 Ann in an Art Shot
The next day we opted for something a bit less physical and went to a shop I had been curious about--The Smashing Olive--an olive oil and vinegar tasting store.  I wasn't really certain about what to expect--but it was this. 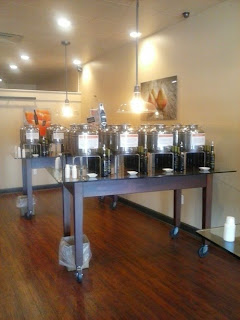 (There's a couple of other sets of urns that you can't see in this shop).  About 20 or so different olive oils, and another 20+ of balsamic vinegars.  The proprietor was great--neither pushy nor impatient, she explained about the differences, gave some advice, pointed out the bread should we want it, and left us to our tasting.  Later she gave us small cups of ice cream--a syrupy aged balsamic on ice cream is surprisingly good.   Of course, having been given our heads, we walked out with an armload of various bottles. 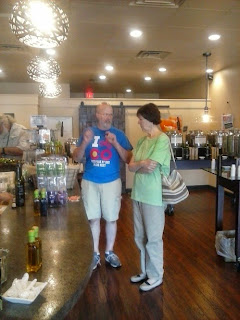 Here I think Mike is expounding on the virtues of the oils, while Margo is showing that patient look that people get so often around my brother  :-)
Margo had her own agenda on this trip--to get a major cat-fix.  I am proud to report that the cats did their best to enable her, with Apache greeting her the moment she got out of the car.  She took something like 64 pictures of cats--with these being the pick of the bunch.  I've posted about various cats from time to time, but never all seven at once.  My gracious--but that's a lot of cats. 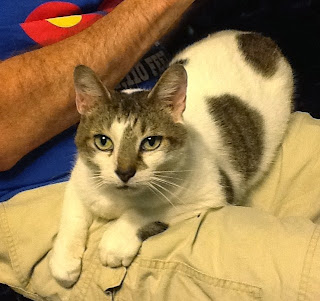 Apache, who is rough on our egos because he tries to get adopted by anyone who comes by 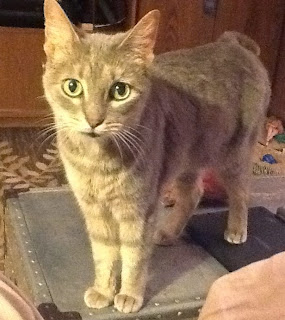 Poohka, who always looks sad and is convinced that all the other cats get more attention that she does (the truth is the opposite--she gets the most because she's so needy) 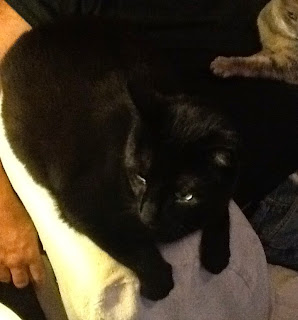 Nazgul, the former (and now failed) feral, who has decided that having servants is better than the wild life 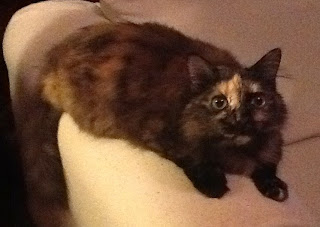 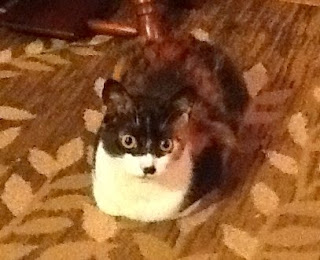 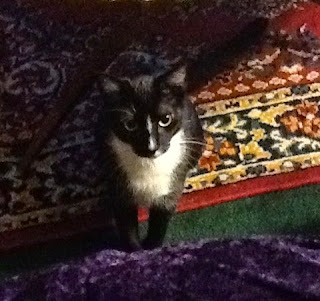 Wilhelm, the smartest (and therefore the biggest pain in the backside) cat we have ever known 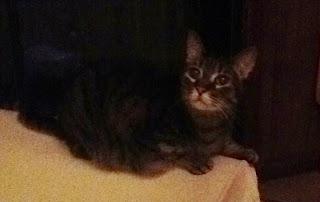 And even the elusive Fiona.  Fi does not like people other than Bob and I to see her. We've had friends who have house sat for us and lived here without seeing her.  But the collection wouldn't have been complete without the Queen of the household
Alas--Mike and Margo had to get back to their own lives.  Two days is too short--much good talk, much laughter, much fun, and we all got a bit too tired.  That's what a vacation is about, right?﻿
﻿
﻿
﻿
﻿
Posted by Ann at 6:37 PM No comments:

Gone over to the Dark Side

When cell phones first became popular, I resisted getting one.  I didn't want to become one of *those* people, walking down the street talking on the phone.  But pay phones went away, I went back to school, my schedule got weird, and sometimes I had to let Bob know where I was.  I broke down and got a second-hand phone, courtesy of a teenage girl who wanted an upgrade.

That one died a few years later, and I got a basic flip phone from track phone.  Whenever the subject of cell phones came up, I would display it proudly:  "My phone makes phone calls.  Nothing else.  It's A Phone."  I was a reverse snob.  I would not be a slave to a phone.

I've been an observer of the smart phone phenomena.  People no longer walk down the street talking on the phone--it's all a silent tapping of the thumbs.  When mobile phones first came out, they were like carrying a brick--it became a status symbol to have the latest smallest phone.  Then, when smart phones appeared, they started getting larger and larger, so now they no longer slip into pockets but are always held in the hand, or in special belt carriers.

I've seen smart phones replace experiences.  Groups of people sitting together at a coffee shop, oddly silent, each staring at her own tiny screen.  When we went to Harry Potter World, we saw people carrying their phones on "selfie sticks" recording themselves.  They could prove they had been there, but had they really experienced it?

Once, I was leading a museum tour at dusk, and a magical moment occurred at the wolf pen.  The wolves gathered, pointed their noses to the sky, and began howling.  It's a wild, primitive sound.  I stood there, listening, listening to the wind in the trees, seeing the day fade, taking in the whole avatistic feeling.  Then I realized I was about the only one doing this.  Everyone else was staring at the small screens on their phones, taking a videotape.  Yes--they recorded it.  But they didn't *feel* it.

Not for me.  I'm living this life.  I may not have videos, but I have memories.

But a tiny rebellious corner of my mind sometimes envied people who had a camera always at hand.  Sometimes I saw things, and I would have liked to take a shot.

And then my darling little flip phone died.

It was with great angst and sadness that I swallowed my pride, allowed the people I had bragged to to laugh at me, and ordered the smallest, dumbest smart phone that I could find. 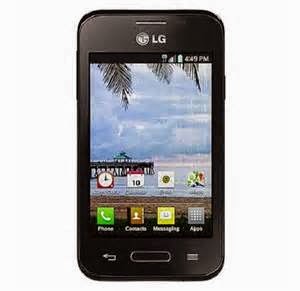 How the mighty have fallen.  When I'm asked if I would be available on a certain day or time, I no longer can give the lofty "I'll check my calendar and get back to you."  I pull out my phone and check.  When I had to do some calculations, I didn't use my brain and a pencil and paper--just thumbed the "calculator" app.   Down that slippery slope I slide.

But having the camera is nice.  The museum has some amazing dinosaur sculptures, made out of car parts. (this picture from the museum web site)

But one day, upon taking a closer look, I found a snake hanging out on the hip bones.  And I had a camera. 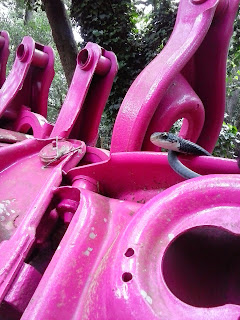 Then, a couple of weeks ago, Bob and I participated in the Camp Gordon Johnston parade.  We've done this for years--just check the blog on Mays past and you can read about it.  We were partway there when Bob realized that we hadn't grabbed the camera.  But we didn't think we'd see anything we hadn't seen before.  But we were wrong--we met a most extraordinary young man named Skyler.  it was the luck of the draw--just before the parade started, the MC came and asked if Skyler could ride with us.  He was from a small town several hours away, but had heard about this parade and wanted to come be in it, and be able to talk to veterans.  He's only 20, but he had put a lot of time, effort, and money to be entirely kitted out.  And I had my phone, with camera 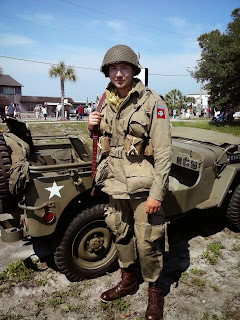 (As an aside--Skyler was in heaven getting to ride in Bob's jeep.  His dream is to own one sometime.  He was in a higher level of heaven after Bob said "hey kid--want to take her for a spin?"   It's lovely to be able to make someone that happy)

But I still feel myself starting to skid down that slope.  Today I was at the museum, but not many people were there, so I spent some time "manning" the hawk (meaning walking around with her on my fist).  I had gone down to the boardwalk that overlooks the lake and deer habitat.  I was leaning on the rail, looking at the still water and the Spanish moss and a deer wandering through the palmettos, with this marvelous bird on my hand, and was just overwhelmed with the richness and good fortune that is my life.

And I took a picture.   ARRRRGHHHHH!!! 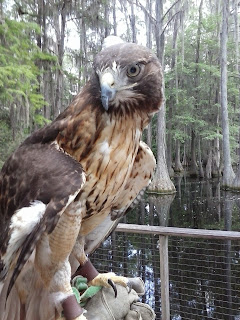 Castle Fit for a Tiny King

Last September I posted pictures of a tiny baby flying squirrel that a friend had found.

I had every intention of raising and releasing him.  I only got as far as the "raising" part.  It's very common for people to find gray squirrels--but rare to find flyers.  So Schrödinger (now "Dingo") was raised alone.  Flyers are communal nesters during cold weather, and I couldn't be sure he would be able to find nesting buddies right away, so I (on the advice of a rehabber) kept him over the winter.  Winter, as some may have noticed, lasted longer than usual this year.  By the time it was warm enough to release him, it was too late.  He's been in captivity too long to be able to bond with other squirrels now.

Time to face the fact that I have another pet flying squirrel (I've had my other one, Delbert, for almost 10 years now.  I really did try for several weeks to release him, but he refused) and get him a more permanent nest box than the cardboard ones he keeps chewing up.  We went to Michael's today to buy a wooden birdhouse for him.  I had said birdhouse in hand, but wandered about for awhile--and found this.  On Sale. 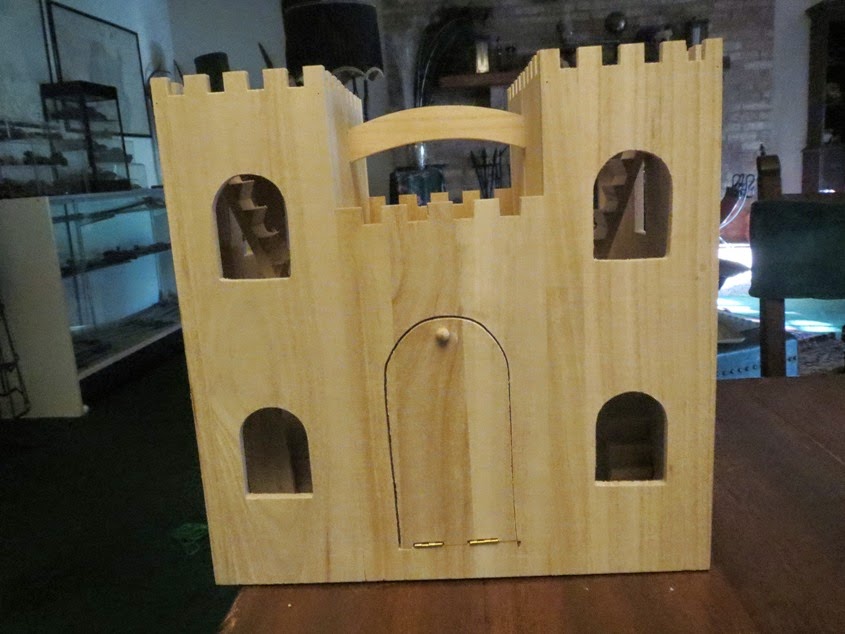 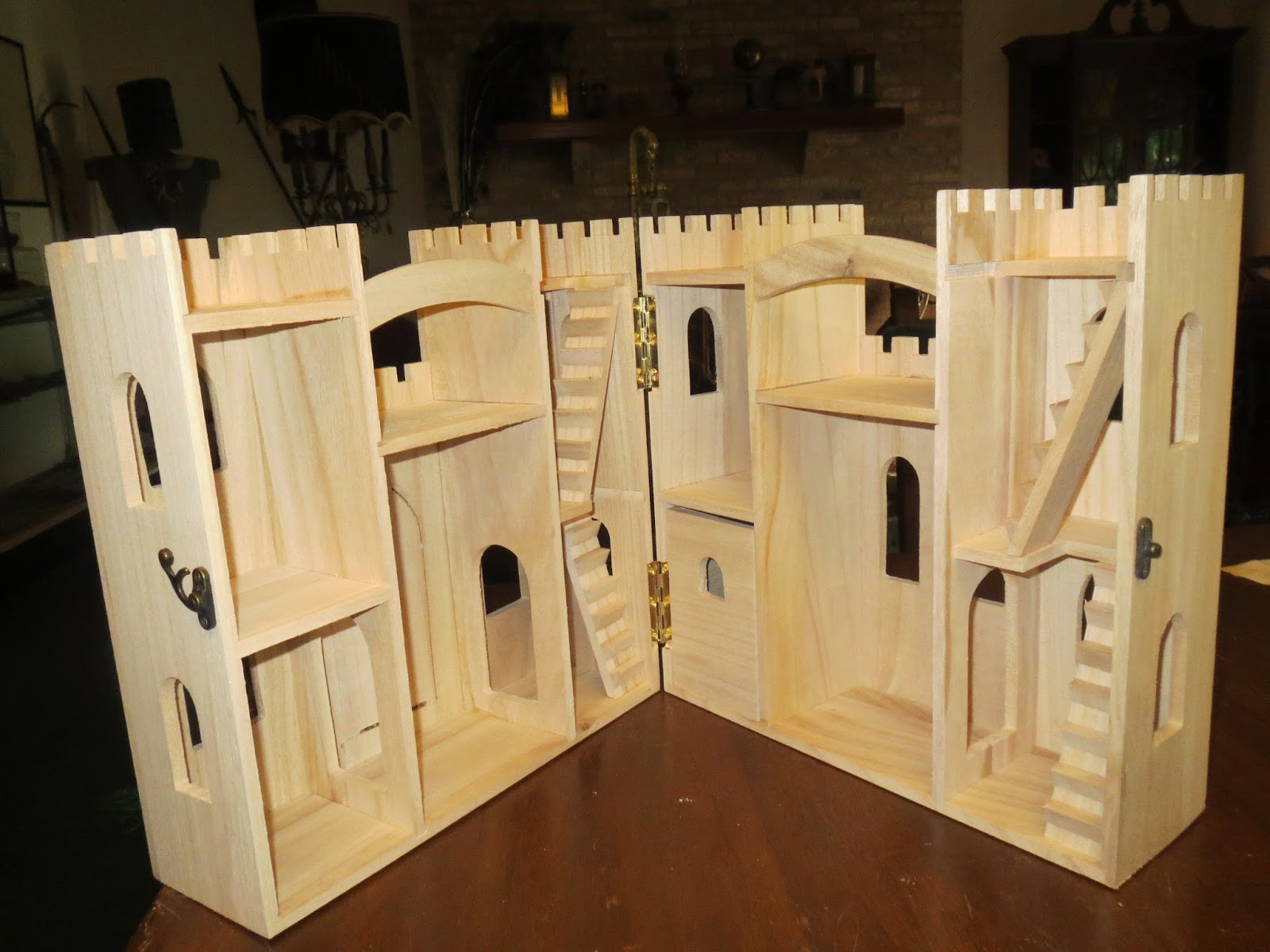 Could I possibly resist?  Why even try?
And besides, he seems to approve.﻿ 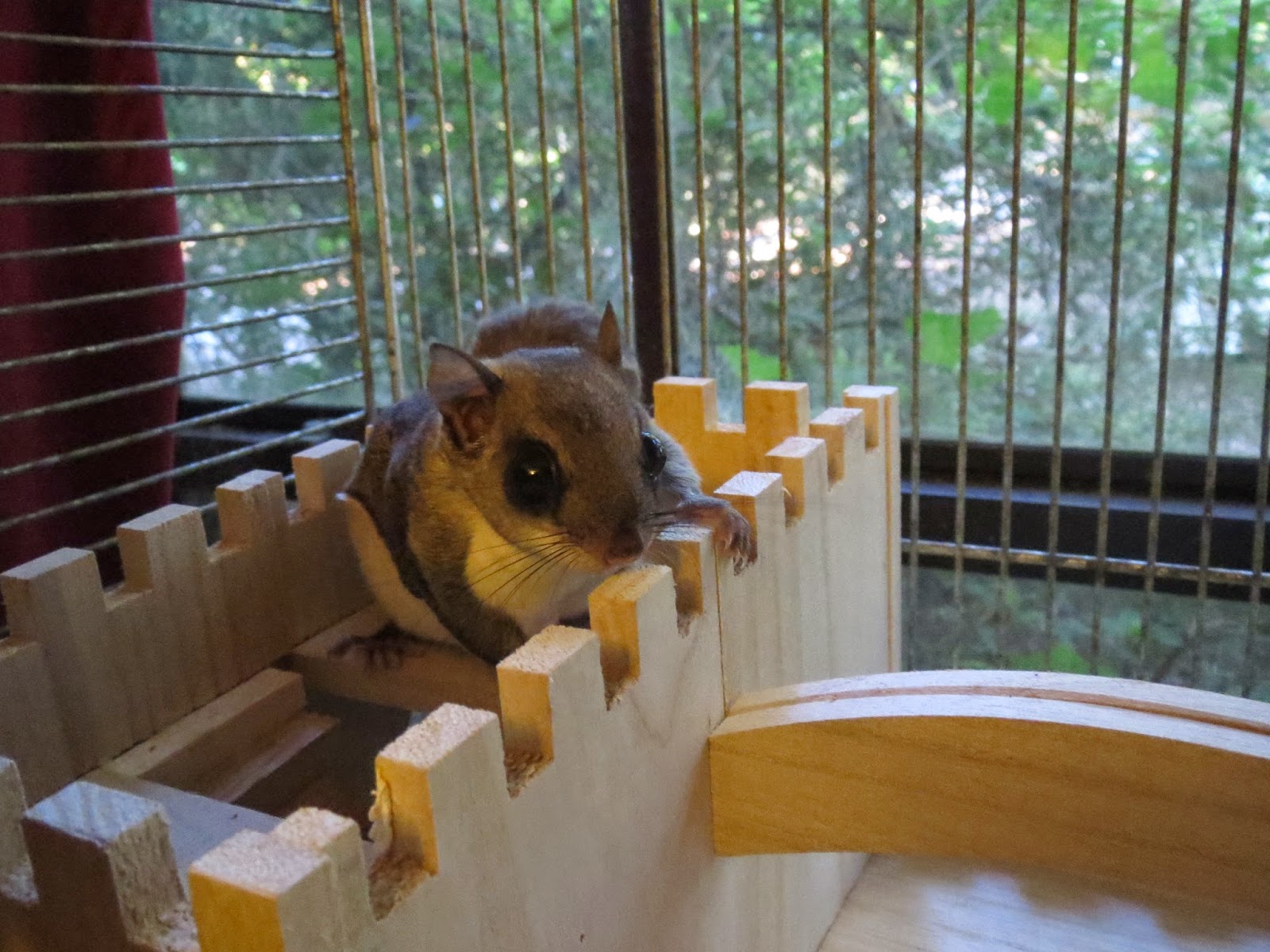