For many years (possibly too many), the team affectionately  known as "The Sick Puppies" (Rob, Jeff, Bob, and myself) built and ran the haunted trail at the Museum's annual Haunted Howl.  We loved it--too put it honestly, we were obsessed with it.  Our dream was to have a professional level of haunt--the type that is actually installed year-round, added to each year, with a budget of many thousands of dollars.  Of course, our little team would have a month to build all the sets from scratch, and the term "thousands" never applied to our budget.  Every year we tried to top the year before--more and bigger sets, more elaborate props, more special effects.  Of course, the bigger and more elaborate it was, the more work it was to tear it all down and put it away.   We burned out, and in 2010, after our biggest and best trail ever, we retired.  We loved the trail, but it had kicked our butts.

In 2011 Bob and I went to Oaxaca for Day of the Dead, and Rob and Jeff did a beautiful static display on the museum grounds.  In 2012 we did the Cabinet of Curiosities which was brilliant and we loved it--but we still thought of the trail. Each of those years someone else had done the trail--and had sort of called it in (which is a phrase which means "did a half-assed job").  We tried to let it go--but it bugged us.

2013--a friend of ours has been named the new Director of Education for the museum--and responsible for the Halloween Howl.  We want her to look good.  Retirement has failed--the Sick Puppies are back on the trail.  Uh . . .

But we made a pinkie promise (for real--I made the guys link pinky fingers) that we wouldn't kill ourselves.  In 2010 we had 13 large scenes.  We decided that you really only need three big scenes (beginning, end, and one in the middle).  The rest can be fillers.

So far, so good.  The build has begun. 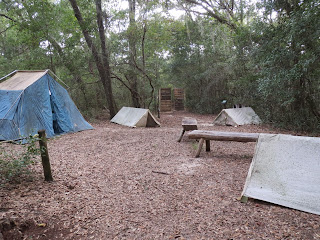 The campground is ready for the bloody campers. 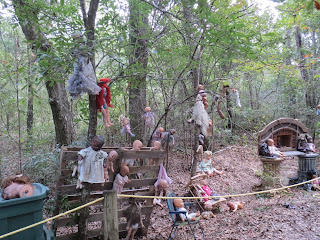 Bob has started arranging his dolls (it's a little disturbing that Bob not only collects dolls but does
some very strange things with them--I try to avoid thinking about it).  He still has another 30-40 dolls to add to the scene. 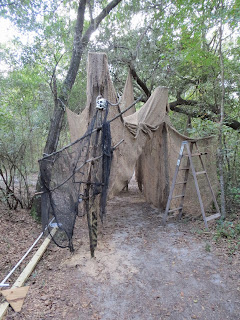 My fishnet (which Jeff insists is "the Hive") has been built of erosion fabric.  I will be making
costumes covered in the same material, so that the actors will be invisible. 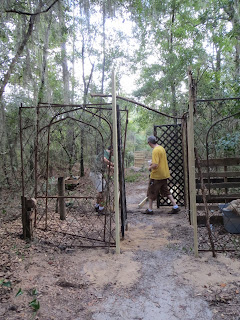 The haunted vineyard has been started.

The toxic waste dump is finished--but I forgot to take the picture. 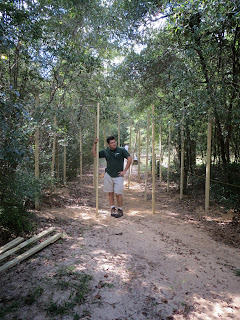 The final scene will be "The Farm."  We thought if we put everything we have into the last scene, that
will be the one people remember.  It will have drop panels, a tipping wall, a maze--and some things I don't even know about yet.  Rob and Jeff start with the infrastructure, which will later be filled in.  At the moment is just looks like a forest of 2 x 4s.

In short, not too bad!

More next week as the we continue to create the magic. 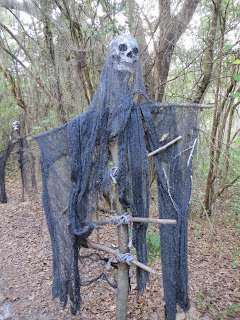 I started my new job two weeks ago.  Not that I gave up either of my old jobs--so now I curate the historic clothing collection, do animal education at the museum, and sew in the costume shop at the School of Theatre.

Meanwhile, back at the ranch, I (as always) have some projects going on.  I just have fiddly fingers and need to be twiddling with something.  And I usually have several going at once, to suit available time and brain cells.  My recent projects: 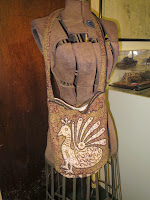 Purse.  This was for practical reasons--my purse was falling apart, and I really dislike shopping (and purses tend to be expensive).  I want at least two pockets on the outside of a bag (keys and glasses) and a half-dozen pockets inside to keep everything from taking a nose-dive to the bottom.  Bob had given me this batik cotton at some point and it seemed just right. 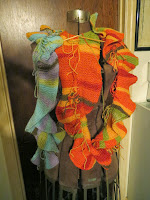 Temperature Scarf.  I mentioned this a few entries ago.  It's slowly growing--I only have to knit less than an hour a week on it, but I can't forge ahead because I have to wait for the daily high temperature.  It rained for almost two months straight during what is usually our hottest time of the year.  On the plus side, it kept the summer from being as dreadfully hot as it usually is.  On the minus side, I'm *really* getting tired of 90-95 degree orange  :-( 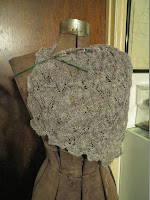 The One-Ounce-Wonder.   I started this about a year ago, and it might take another year to finish it.  It started with the question of "how much can I do with one ounce of fiber?" (in this case, a luscious yak down/silk blend).  So it got spun nice and fine and the knitting began.  It doesn't get worked on much--it's a bit difficult to see yarn this fine, and the lacework is pretty fiddly.  It's going to be a triangular scarf (or shawl, depending on how big it gets).  So far, I've knit a little over a half-ounce of the finished yarn.  Now its name refers to the question of "I wonder why I'm doing this?" or "I wonder if I'll ever get it finished?" 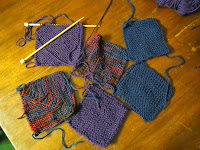 Felted Slippers:  These knitted squares will turn into another pair of felted wool slippers.  They're just simple garter-stitch squares.  I really shouldn't even admit to my knitting time on them--they're my driving knitting.  Uh--yeah.  My daily commute includes way too many traffic lights, often red.  Rather than pound on the steering wheel and swearing, and ONLY AFTER COMING TO A COMPLETE STOP (ahem), I knit.  I can do garter stitch literally blindfolded, so I'm not even looking at it, and I can drop it in mid-stitch when the light changes.  I get about two squares done a week, and my blood pressure is much lower. 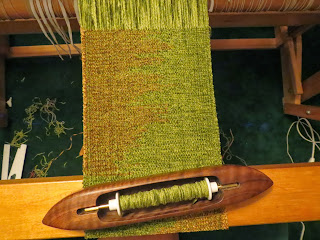 The Folded-Strip Tote Bag:  I saw a cute pattern for making a tote bag out of a long narrow strip of fabric.  Perfect for something handwoven, no?  I've warped the loom with some chenille yarn (which will feel nice and velvety) and I'm doing what's called a "clasped weft" which is letting me do this two-toned irregular zig-zag design.  It will probably have to wait until after the Halloween Howl to get much woven on it--as I have another big project with a deadline.  To wit: 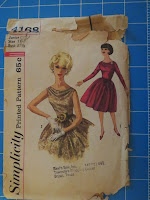 The Wedding Dress:  A friend is getting married in about a month (see the shawl/veil I made for the occasion a few posts ago).  What she really wanted was a vintage-looking dress.  She had even found a late 50's pattern.  Downside is that it wasn't her size, and patterns that fit closely need to be tweaked for  individual bodies anyway (for instance, it has a tight-fitting sleeve with elbow darts, and her arm is shorter from shoulder to elbow than the pattern).  I just sort of barged in and said I would make it.  Two old sheets later and we had a pattern that would work.  The fabric is a *gorgeous* cream-colored silk/hemp (yes--hemp!) blend.  It's almost finished (and you don't get to see pictures until after the wedding) but my fingers are sore.  The skirt is very full--and I don't like the "wadged up" look of tight gathering--so I did what's called "cartridge pleating."  Basically, you fold the fabric into small pleats, and then sew them to the waistband.  One. By. One.   By. Hand.  Takes awhile, but its so pretty.   This is almost finished--I need to put it one her one more time to choose the hem length, and then hem it up.  By hand, of course.

Finally, a finished project of another sort.  We just released our last possum.  He was one of the group that escaped into Bob's room during Mike's visit last spring.  The others have long gone on their way, but something went wrong with Stumpy (somewhere along the line when he was a baby he lost most of his tail.  The Manx look is actually quite adorable).  He was in the release cage, and one morning he was spinning in uncontrollable tight circles.  Because of all the rain this summer, we had a major mosquito problem, so the general suspicion was West Nile virus (I didn't get him tested because there really isn't much treatment for it except time).  The neurological problem was bad enough that he couldn't even eat or drink on his own, so twice a day for about three weeks we wrapped him in a towel and I pinned him down to stop the circling while Bob squirted water and soft food into his mouth.  Much to our amazement, he recovered.  We kept him another month to be sure--and then opened the door and let him out.  It was really a hard thing to do after spending so much time on him, but giving a critter his freedom is what rehabbing is all about.  Unlike squirrels, opossums usually don't hang around or come back after a release, so I probably won't see him again (but if I do, he'll be easy to recognize) 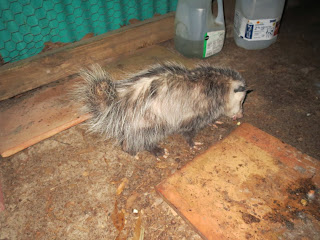 And the building of the Haunted Trail began last weekend--pictures to follow.

Oh yes--almost through reading Jules Verne's "Mysterious Island."  I really think those Victorian authors got paid by the adjective . . .

And that's how I keep myself busy.
Posted by Ann at 8:18 PM No comments: