It has been pointed out to me that it's been over a month since I last posted.  Oops?  Can I use the start of the term for an excuse?  I had planned on just working in the historic collection--but got talked into teaching a couple of textile labs as well.  And helping out at the Goodwood Plantation for an exhibit they want to do.  Still working at the Museum.  Keeping busy . . .

Margo is the one who nudged me to post--and that's because she wants to see how the kittens are growing. So I'll start with them, and then she doesn't have to read the rest :-) 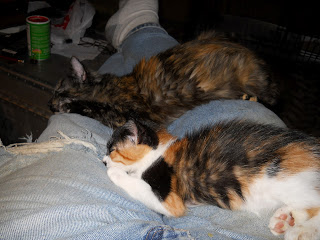 RiverSong and NokoMarie are still best buddies--here, on Bob's lap

And NokoMarie and the great Nazgul are buddies.  She didn't seem to notice that while they were napping on Bob's lap he sort of rolled over on top of her. 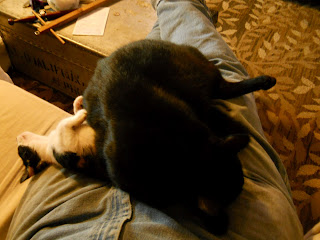 In fact, it seems that *everybody* wants to take a nap with Bob.  (Unfortunately, RiverSong decided to jump off just as I was taking the picture--but she had been there with the rest).  As long as the cats are scattered around the house it doesn't seem like we have so many of them (sort of like spreading your peas around on the plate so you mother thinks that you ate some of them).  But put them all in one spot and you realize we have a pretty furry household. 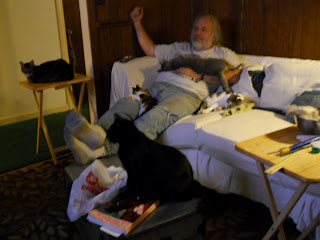 (OK, Margo--you can stop now.  The rest doens't have cats)

When Bob's not being a cat-couch, he's been working on his models.  I'll have to make him do a model post sometime to give details (and say what's from a kit and what parts he's built from scratch) but for now here are these: 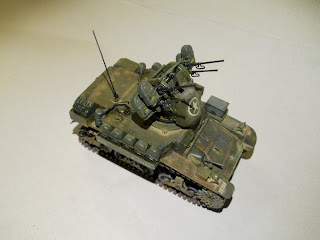 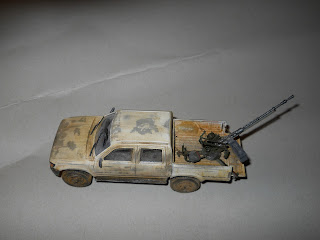 The first is a Quad .50 AA Stuart , and the second a Toyota Hilux--Libyan rebel truck, modified to carry a Russian made anti-aircraft gun.  It's his paint jobs that amaze me--especially the rust and wear on the truck.

And here's another of his paint jobs.  We're beginning to build Halloween props--we're not doing the haunted trail this year (I mean it--for real--not at all like I didn't do it last year) but we are decorating the one-room schoolhouse and turning it into a Cabinet of Curiosities.  Now we need some Curiosities to go in it.  I'm putting together a vampire killing kit, and one of the items is a small gun to shoot the silver bullets 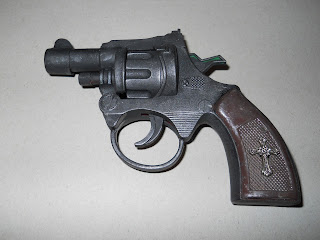 Now while it would have been nice to go out and buy an approprite gun, the idea is not to go too crazy with the budget.  So this is one of Bob's modifications and awesome paint job.  What I gave him to work with was a $1 cap gun. 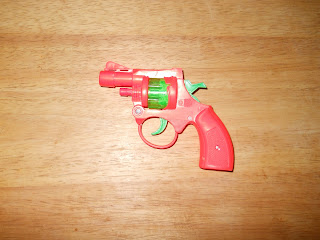 My small contribution is a juvenile Fiji mermaid 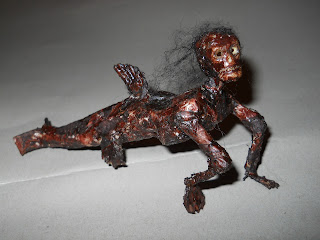 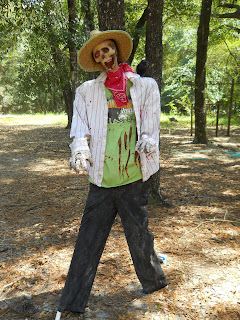 At the moment, there are a lot of works in progress--but here's a sneak preview of a conversion process.  I'm taking a Walgreen plastic skeleton and will be turning him into an Inca mummy.  First some muscles (not much---after all, he is dried up) with newspaper, the he got wrapped in a thin plastic dropcloth which was shrunk with a heat gun, and after that some paper mache and his first paint layers.  I haven't touched his face and hands yet because I have to fold him into his pose first to be able to model those.  I did find that hanging him from the clothes line makes him easier to paint. 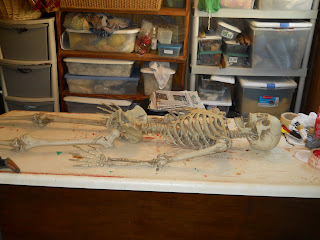 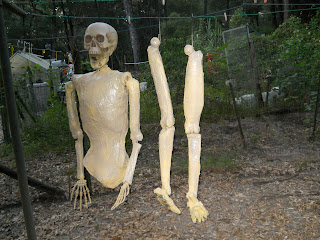