I AM OVER THIS FREAKIN' RAIN!!

There--had to get it out of the system.  I really try not to complain, with parts of the country having serious wildfire and other parts having serious flooding (wish they could get together and cancel each other out) and we're just mushy.  And I could even deal with the mushy if it weren't for the clouds and swarms of mosquitoes that make it impossible to be outside for more than a few minutes--and that require me to wear long pants and a long-sleeved shirt even though the temps are in the 90's.

So--random and mostly inside stuff. 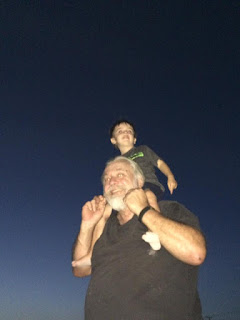 OK--this was outside--but on the beach with a good breeze blowing.  We went to Mexico Beach for the 4th--Robert and Amanda are back from Italy (and trying to adjust).  The young man getting a good view from Bob's shoulder's is our great-nephew Zeke.

From safely indoors looking out the kitchen window we spotted three deer--two were eating lichen from a stump, while the third was on the alert and obviously not happy about something.

But looking around we could see the predator she was eyeing.  We've tried to explain to Wilhelm that a deer might be just a *little* too big for him, but he doesn't believe us. 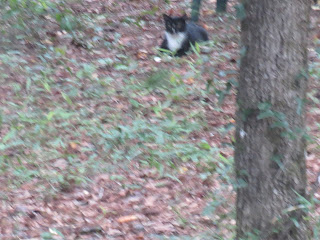 My little foxes continue elusive.  As soon as I go anywhere near their cage, they disappear.  And that's good--I want them to be afraid of people.  On the other hand, I do need to see them once in awhile to make sure that they're doing well.  So we set our game camera up in their cage to see what they do at night.

From time to time I've posted about a shawl I've been knitting from yarn that's I've spun on my daily walk.  At this point I'm about 6 1/2 panels into the 7 panel shawl--and I've stalled.  See the opening comment about those blasted mosquitoes--I haven't been able to spin for this for three weeks!!   I know I won't be able to wear this for another 5 or 6 months, but it's just so darned frustrating to stall this close to the finish.  Grrrrrr. 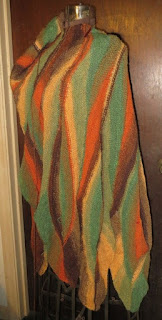 Not that I don't have other stuff to do.  A few posts back I talked about getting some fleece from a local shepherd.  She doesn't spin (and I don't know if she knits) so she doesn't have anything from her own sheep.  I decided to rectify that and made a small cowl to wear in the winter when she tends her animals.  Of course, one of these days I should actually mail it to her (although, again, there are a few months until it is wearable.  (Her sheep are multicolored white, black and gray, so I wanted to put in all three colors) 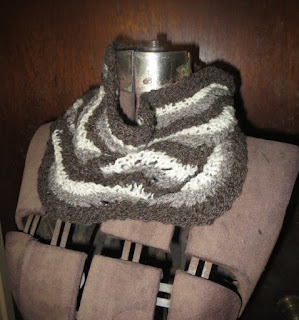 A few years ago I made what I called my Harpy Puppet.
I wore him for the Halloween Howl, and in the next couple of years he was just a static prop.  But time, humidity, and cockroaches sort of did a number on his face, and last year at the Howl he fell off of where he was mounted and got stepped on.  So, alas poor Harpy--into the trash he went.  But I realized that I missed him.  In between Howls he hung from the ceiling of my cottage.  So when the Halloween Forum had it's annual "Prop under $20" challenge I made a new harpy (her name is Esmeralda).  I still need to make a harness and put on the control sticks for her arms (couldn't fit all that into the $20 budget) but she's going up on the ceiling soon. 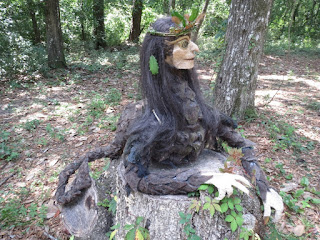 My favorite thing about her is her eyes.  It's an interesting technique of painting nail polish on the back of a glass cabochon.  The trick is to paint on a color, then scratch most of it off, and repeat about 5 times.  I really love the effect. 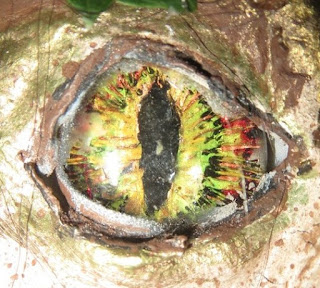 All in all, enough to keep me busy until it's safe to go outside again.  Alas, the poor garden is suffering between getting drowned and then stewed in the heat--but at least it doesn't need much tending!
Reading:  Made it through the first Dragons of Pern book.  Sorry, fans, but I'm skipping the next 22.  Uneven writing, clichéd characters and talking dragons just doesn't do it for me.
Current read is really nerdy:  Now I Sit Me Down--A history of Chairs.  Yep.  But think about it.  Thrones.  Executive  chairs.  Archie Bunker's chair.  Didn't everyone growing up have a "Dad's Chair" (usually the recliner).  There's a lot of status and social history of chairs.  And he's a good writer.
Posted by Ann at 6:27 PM No comments:

When last I posted, we were preparing to go to Scott Con--the modeler's convention in Georgia.

It got off to an iffy start.  It's about a 3 1/2 hour drive there.  At about three hours and 20 minutes the transmission suddenly started racing and wouldn't shift.  We pulled off into a parking lot and turned the car off and had quiet panic attacks.  It's a Saturday--no one would be able to work on the car until Monday.  We made emergency plans--we spotted an Enterprise rent-a-car--realized we'd have to rent two so I could go home and take care of the animals and Bob could stay in town and get the car fixed.  Then we tried turning the car back on and it worked just fine.  So then we have the decision--do we turn around and go home, or go ahead to the Con and hope we didn't have a breakdown late Saturday on the way home.  We went to the Con.  So, admittedly we were not in the best frame of mind when we walked in.

And it sort of went downhill from there.  This Con takes place in an air museum in one of the hangars.  We walked in, and then stopped to let our eyes adjust.  And kept trying to adjust.  None of the auxiliary lights were on.  And then the sweat started beading up because the AC also was not working particularly well (or they couldn't afford to run it much).

The first thing you do when you walk into a Con is to eagerly look over at the vendor tables--and, compared to previous years, there wasn't much to look over.  Vendor numbers were really down.  The other thing you do is look at everyone else's models--and those numbers were way down too.  In general, it was rather a disappointment.  To top it off, I suggested we go to the museum's snack bar for lunch (and to hope they had AC) -- we went to the next building where the snack bar *used* to be . . . .    There are no eateries close by, and we didn't want to risk breaking down and not being able to retrieve the models so we were stuck in the dark, sweating and hungry, waiting the four hours for the judging.  Fortunately, I know that I am subject go getting "hangry" so I had a stash of almonds and craisins with me.

There were some plusses.  Bob is very very good at his models.  Combine that with a lower turnout and he placed 4 of his 5 models (my Valkyrie loom didn't place, but I didn't expect it to, so that was all right.) 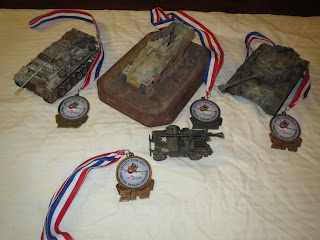 The other plus was the raffles.  He bought a string of 30 raffle tickets, and because there weren't a lot of people there, by the time we left he had picked up 14 prizes (the prizes were still being distributed but we wanted to go ahead and leave in case the car broke down so we gave the rest of our tickets away) 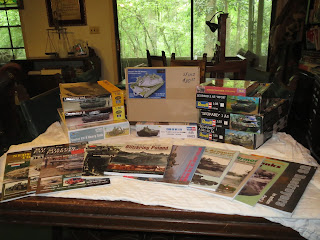 And the car worked fine on the drive home.  Sadly--we probably won't be going back.
Otherwise--random June:
River has taken to guarding the letter tiles when we play Scrabble. 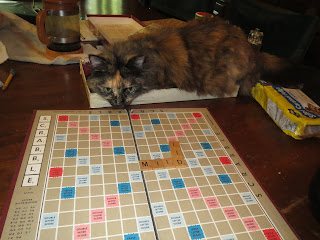 I think one of the chicken may have hurt herself laying an egg. 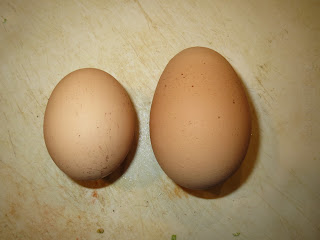 The garden is still going a bit crazy 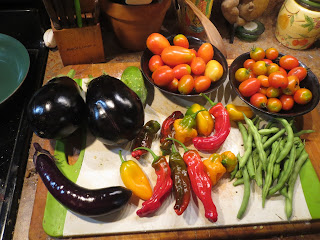 We had a large softshell turtle lay eggs in our yard 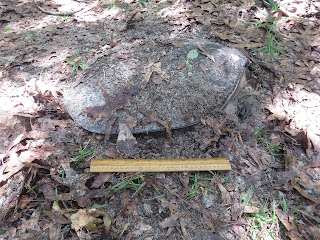 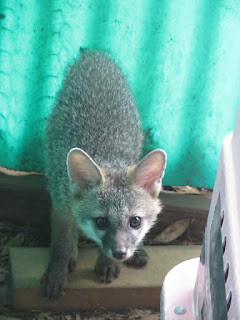 That's enough to have kept us busy.
Reading:  Anne McCaffery, Dragon Rider.  This series actually started in the late 60's, in the fantasy heyday of Lord of the Rings and Chronicles of Narnia.  And I had never ready them.  From time to time friends will mention them and be surprised that I hadn't.  Now that I've started the first one, I'm thinking that maybe I've started them before and gone "meh" and put them down.  I'll finish the first one and that will be enough.  I know there they're popular (there are 20-something books in the series) but I find the characters and the plots to be both uneven and clichéd.﻿