Playin' at the Hookey Again!

*I* wasn't playing hookey.  I was merely taking a day off.  My job curating the historic clothing collection is a 10-hour a week position--I did that Monday and Tuesday.  Wednesday I worked at the Museum.   So I figured take a home day while I can (because I've just accepted a *third* part-time job that starts this coming week, which will cut into home days).

So my day off was legit.  Bob's--not so much.  But he really hoofed it and got two day's worth work done on Wednesday and just called in Thursday for a mental health day.  And whisked me away! 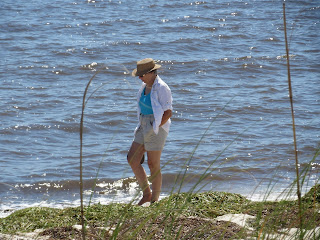 My plan for my day had been fairly prosaic--sew some Halloween costumes and get some chores done.  Instead, being as it was a beautiful day, not too hot, he took me down to Bald Point (one of the beaches on the gulf).  It's the off-season, so we had it to ourselves.  We didn't swim (the Gulf water tends to be a bit warm, murky, and uninviting this time of year) but had a long leisurely walk.  More and more we find ourselves taking pictures of things just for the patterns on them.  Bob uses them as inspiration when painting his models--he's on a dinosaur kick now and who knows what colors they really were? 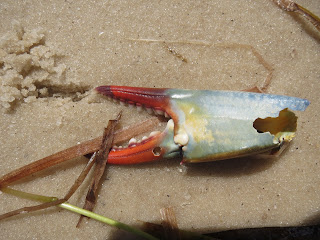 One of the miracles of fall is beginning--we saw monarch butterflies fluttering about.  It's migration time, and they'll be heading across the gulf to Mexico.  It's hard to grasp that these tiny bits of color, that can get tossed in any breeze, can somehow make it across the wide expanse of the gulf.  All you can do is wish them luck. 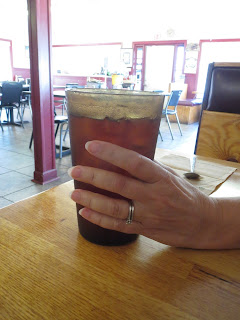 All that looking at the ocean put us in the mood for seafood, so we headed to a small town with a
smaller restaurant where Bob dove into the fried shrimp and I made do with a grilled platter of shrimp, scallops ,grouper, crab claws, and devilled crab.  But first, after all that walking, large quantities of iced tea were needed.  Down here in the South we don't use small glasses.

Bob was the one who chose the restaurant (The Coastal if you happen to be in the neighborhood), and it just "happened" to be next to the Gulf Coast Marine specimens lab--a small research aquarium.  No stingrays to pat here, but a number of smaller tanks--shallow trays of various sea life that you can pick up and study (good thing I'd had that dinner or the scallops might have gone home with me).  Larger pools with sharks and sea turtles--no patting there lest you lose a finger or hand.  Some interesting research on octopi--who are both intelligent and curious.  We watched one video of a researcher who offered a toy to an octopus.  She reached out a tentacle and took the toy, then carefully looked at it and tasted it.  That part didn't surprise me--they will interact with humans and they study things.  What startled me was than when she finished she extended the tentacle again and handed it back to the man. 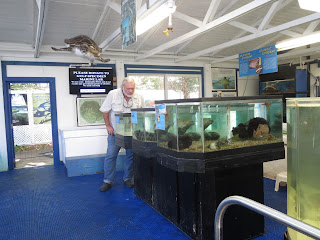 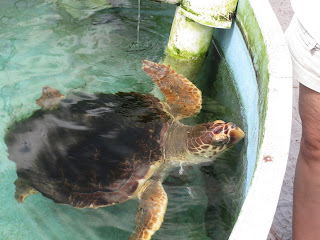 And thence home for a nap.   Work can wait for tomorrow.

I've always loved museums.  I love the past, the present, the concepts for the future.  I love wandering around displays.

And, as has been seen in some previous blog posts, sometimes I get to do displays.  So when I heard that an art history student was planning on doing a display of pre-Columbian Peruvian pottery I contacted her with "y'know--I've got some pre-Columbian Peruvian textiles in my collection."  Sort of elbowed my way into her project. The project had that rare things going for it--a perfect committee.  The whole thing was Liz's idea, and she designed it, chose the pottery, and did the pictures and text panels for the walls. (this was part of her program for her Master's degree).  We had the help of Wayne, the museum preparator, who knows how to arrange cases, do lighting, and, in general, how to make things look good.   I supplied the textiles and a pair of objective eyes for the arrangement of the pieces. 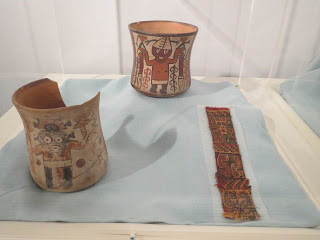 If I may say so myself--the display is lovely.  It's actually difficult to get some good pictures, as the overall effect is soft and serene.  In a serene
way--it was very exciting to work on this, mainly because of the age of the objects.  As "Pre-Columbian Peruvian" covers a *lot* of geography and time, Liz decided to narrow the focus down to the Nazca era--which meant that the pieces we were handling were 1500 to 2000 years old.  It makes you be very very careful. 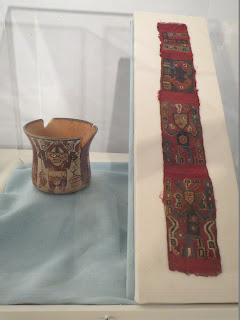 It's also exciting that this is a bona-fide, accredited fine arts museum--and my name is on the wall as a co-curator of a display.  I feel like I've arrived.
Posted by Ann at 6:58 PM No comments:

Have to continue to indulge in being a proud great-aunt.  Here's Dane with his new little brother Zeke. 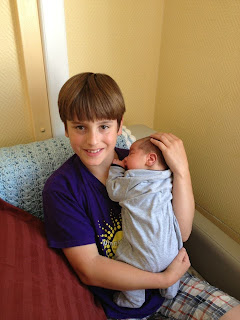 Even though Dane had ordered a little sister, I think he'll do just fine with a brother.  He'd better be satisfied--I don't think we'll talk Amanda into doing this again!


Keeping up with my reading list--recently read:
"Hallucinations" by Oliver Sacks.  Sacks is a neurologist with an easy-to-read writing style.  While he usually writes on neurology, I noticed that he had also written a "Oaxaca Journal" about his trip to that lovely Mexican state. Because of my own fondness for Oaxaca I read that one as well.
"Northanger Abbey" by Jane Austen.  Funny snarky parody of the romance novels of Austen's time.
"The Prime of Miss Jean Brodie"   One of those classics that I had never read (or even seen the movie even though I'm I big Maggie Smith fan.  Heard it mentioned on NPR and decided to read it.  It's a hard book to categorize--almost the opposite of a coming-of-age story.

That puts me between books at the moment (I caught a cold this weekend so finished Jean Brodie faster than intended).  Back to Project Gutenberg.