Playing with the Eclipse

As anyone who hasn't been living under a rock for the last couple of months now, there was a solar eclipse today.  Alas, we did not see a totality--I am not fond enough of traffic jams and huge crowds to have driven the 300 miles to see that (with no guarantee of decent weather and really no guarantee of a decent clean toilet)

We were facing this day with some trepidation--we are now in our standard weather pattern of clouding up and raining in the early afternoon--say, from about 2:00-3:00-which of course was the time scheduled for the eclipse.  One o'clock came, along with the beginning of the afternoon clouds.  The eclipse began, and we watched the solar fan dance as the sun slipped in and out, showing a tiny bite taken out of the edge.  Then, mirabile dictu , the skies cleared.  We watched (with proper protection, of course) as most of the sun slowly disappeared (we got about 86% of totality).  But while the rest of the country was looking up, I was looking down.  I find it fascinating that the tree leaves will act like hundreds of pinhole cameras, casting crescent shadows.  I had my camera (did not take pictures of the eclipse itself because I don't have the proper filters) and a piece of poster board that I would drop below various trees and bushes and snap pictures. 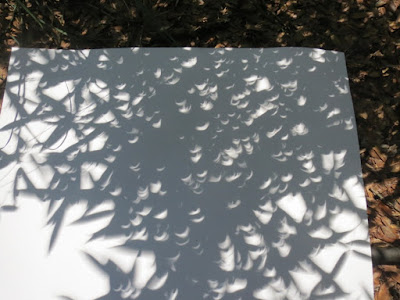 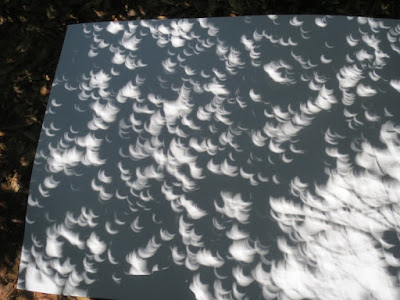 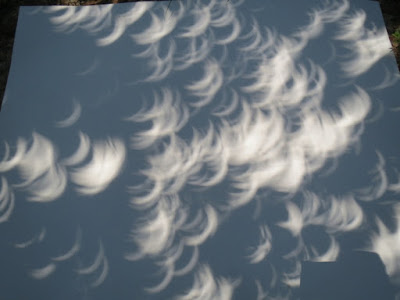 Then, gradually, the sun returned--which we didn't watch because within 20 minutes of totality, the clouds rolled in and blotted out everything.  I'm OK with that--I am just amazed and grateful that they cleared for that one precious hour.
Meanwhile, back at the farm (as the saying goes), a couple of weeks ago came that time that any rehabber/ wild critter foster parent achieve the goal that they dread: time to release.  This is what it's all about--returning them to the wild.  It's  so hard after caring for them.   So I fed the foxes one evening, and when I walked out, I left the cage door open behind me.

(not sure if that video will show--I tried to make it a smaller file but it's still having problems loading)   If it doesn't load, use your imagination and visualize a fox leaving the cage.

Hard as it is to let them go, the cool thing is that they're still hanging around.  I put out food for them, and set up the video camera, and all three of them are still looking pretty  good.  Eventually they'll wander off, but for now it's good to know that they'll come get some dinner while they're learning how to hunt for themselves.

Reading:  Microshelters.  Bob picked this up while we were at the Tractor Supply store.  Basically it's riding on the tiny house movement, only these are *really* small, meant to be used as backyard retreats or lake cabins.  While I personally could never live tiny (I need my stuff) I love the creativity that goes into these little builds.

Bob has a thing about stingrays.  Yea--that's different.  But I've learned that if we ever go to a zoo or aquarium that has a stingray pool, I had better drag him around to see everything else first because he'll be hanging over the pool trying to pat the rays until the place closes (OK--I'll admit that they do feel rather nice, sort of soft and velvety and not like their sandpapered skinned shark cousins).   And although he's normally a properly frugal sort of guy, he doesn't hesitate for a moment to drop $5 for an ounce of fish (or $10 or $15) to feed them  (and, yeah, I'll admit that it's kinda fun to do that because they just sort of Hoover it out of your hand).

So when our friend Kim let us know last month that the Gulf World Marine Park at Panama City Beach (where we've fed the rays before) will now let you actually get in the pool with the rays, we of course had to set up a date right away.   Bob wanted to wait in the line immediately when we got there--Kim and I pointed out that we already had the reservations and the swim is limited to six people so there wouldn't be a line, so we really didn't need to be waiting an hour early.  The compromise is that we got to look around for about 45 minutes.

Of course, as a "zoological professional" I had to assure myself about the welfare of the fish.  All was well--we had to shower beforehand, and the fish were not harassed.  Quite the opposite--we all got to pose for a photoshoot where the rays on command would swim into our arms, give us a hug, and stick their heads out of the water for a kiss.  Being as there was a fish reward involved, the rays were mobbing for a chance to pose.  Afterwards we got to swim with them for about a half hour (armed with fish).  The water was lovely and cool on a hot and sticky day and I'm not sure what Kim and I enjoyed more--playing with the rays ourselves, or watching Bob being so happily enthusiastic.

As I am also a properly frugal person (OK, people say I'm a cheapskate) I wasn't going to bother looking at the photo op pictures because they charge an arm and a leg for them.  But Kim wanted to at least look at them.  And when I saw this . . . well, I just reached for my credit card.  Because how often do you get to see a 60-something dude looking like an 8-year-old? 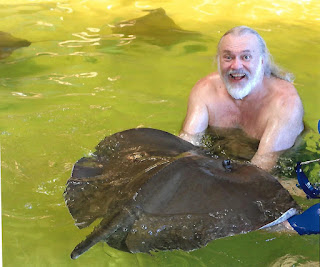