I've been working on quite an exciting "project" for the last few weeks.  The Museum got in a red-tailed hawk from a rehabber.  If I have the story correct, it was a classic case of bird vs. car.  Fortunately, she wasn't badly damaged, but her right wing now works awkwardly, and she's lost some vision in her right eye.  As she can't be released, we have her--and would like to use her as an education bird.

I was a)  excited, b) honored, and c) downright nervous when I was asked to be one of the people to train her.  I've handled hawks and owls before, but only after they've been trained.  Working with an untrained one would be a new experience.

There is a definite mindset you need to go into a cage with a potentially dangerous animal.  You have to be very alert, very focused, and yet very calm and relaxed.  It's almost meditative.

Training an education bird is also different from training a falconry bird.  For falconry, the bird is usually going to be handled by only one person, and in a controlled situation.  It can be done fairly quickly by only hand-feeding the bird (so it's get trained or go hungry).  Education birds have to tolerate a variety of people going in and out of her cage (the person who cleans the cage in the morning may not be the person who puts her food in in the afternoon, and multiple people will be handling her).  And later be able to remain calm while groups of people are looking and her and children are running around. 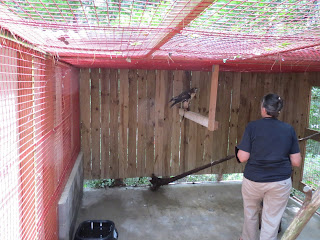 So it's a matter of taking it slowly--lots of baby steps.  First, a few days just hanging around in her cage.  Then hanging out by her perch. Each day going one step further.  Casually laying a hand on the perch.  Getting it closer.  Touching her feet.  Pushing one foot slightly off balance so she puts in on the glove.  Then the other foot--so you've got your hand on the perch, but she's standing on it.  Then the lift.

Of course, she would often fly off.  You chivvy her back to the perch, touch her feet, and leave (each session ends with the foot-touching, so she knows she had to be touched before you'll go away). 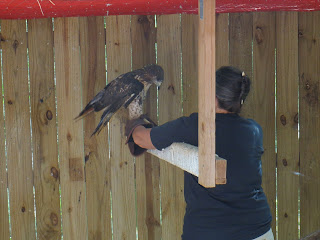 Then you start messin' with the jesses (the leather ankle straps).  Eventually comes the day that she tries to fly off--and can't, because you're hanging onto the jesses.  That's called "bating" and can be the battle royal with mad flapping and fighting and eventually hanging upside down--while you're trying to stay calm and a) not hurt the bird (high priority) and b) not get taloned (lower priority, but important).  At first it could take many long fighting minutes to get her back onto the glove.  She still bates, but you just lift her back up   (no bating pictures--it's a mad flurry when it happens). 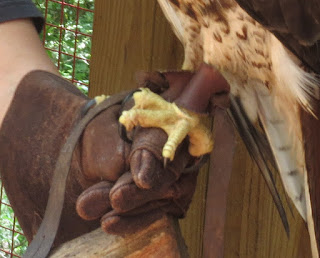 Here's a close up to show why caution is necessary.  She has a tremendously strong grip, and has both cut off my circulation and bruised my hand through the glove.  And once or twice a talon has pierced it--not enough to break skin, but enough that I was praying she wouldn't squeeze any harder.

It's been four weeks since I started.  I can get her on the glove, walk around with her, let families (with small noisy children) look at her and take pictures, and get her on and off a perch (very important--she's a heavy bird and my arm wears out pretty fast).

It's been an amazing and exhilarating experience.  I am one lucky woman! 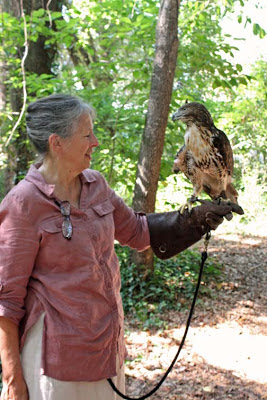 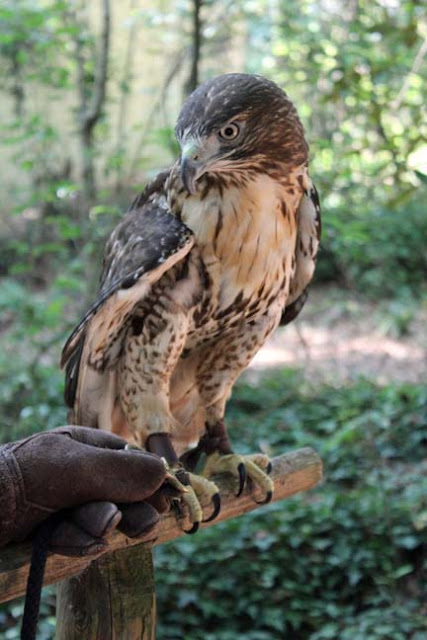