Spring has sprung, summer moved in close behind (we've already hit 100 degrees) and once again I find myself fostering wild babies.

The little armadillo in the last post went on to an animal rehabber--I sort of had to do the adult thing.  There were scratch marks on him--probably from a cat--and a friend of mine who works with that particular rehabber let me know that he did indeed get an infection.  He's recovered but it's good that I gave him up.

However . . . a few weeks later my other rehabber friend got in some babies in good health and I got two of them.  They are just so strangely adorable (here they're checking my fingers to see if I brought them a worm) 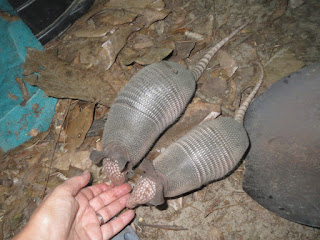 Such cute little guys.  Of course, they needed an armadillo-proof pen.  We were pretty much there; when we fostered the little foxes last year we had dug out the release pen and lined it with wire so they couldn't dig out.  Several inches of dirt on top of that, and mulch over all of that.  The only additional thing we had to do was line the bottom walls with some plastic sheeting.  Surprisingly, armadillos can climb, and it's possible for them to climb, fall, and hurt themselves.

So in they go--and within a day they disappeared.  The little buggers had found about a 2" gap between the bottom wire and the wall and dug out.  They didn't escape, because the outside of the pen is also wire-lined, with paving stones over that.  But . . . I never saw them.  I knew at least one of them was still around, because the food got eaten.  I kept sneaking out there at all hours, hoping to catch them out in the cage so I could block the burrow.  Alas--no luck in that.  Finally on the fourth day, I had to be certain that they were both all right, so long-suffering Bob and I got to work with trowels, pruners, and other implements of destruction.  Despite the 95 degree temps we both put on long pants, long-sleeved shirts, and gloves because of biting flies and mosquitoes--oh the joys of Florida living.

So we pulled up paving blocks, peeled up wire, and started digging.  I found a soft spot right away, and triumphantly stated "oh--this won't take long at all".  That was a bit premature.  We couldn't just plunge in with a shovel because we might have hit them.  Besides, the top 6 inches was mostly tree roots that had to be cut away.  So, using trowels, we gently dug a trench.  And dug.  And continued to dig.  Cut roots and dug.  Cut more roots and dug.  Finally we saw masses of leaves being kicked out of the hole we were following into our trench and we knew we had come to the nesting chamber.  One of the little guys backed out and we grabbed him.  Success was in the air.  Then we saw sand flying as the other one started digging like a little auger.  We were frantically trying to get ahead of him, when at last he also backed out to clear some dirt and we snagged him as well.  My "not long at all" took about 2 hours of digging on that hot sweaty buggy day to yield a trench about 4 feet long and two feet deep--which of course had to be filled back in and the wire and pavers replaced. 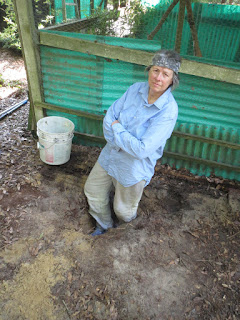 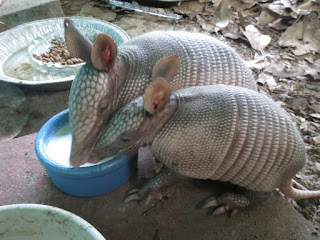 They're not my only foster, of course.  I've already released my first batch of squirrels, and one opossum, and I still have seven little opossums.  While at first glance they seem to be cute . . . 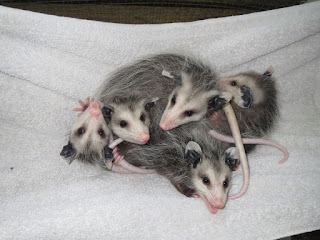 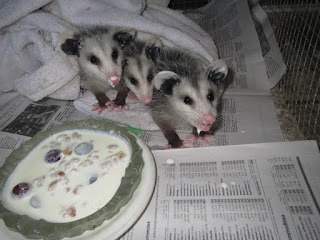 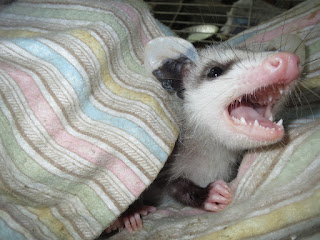 It's not going to break my heart when it's time to let these guys go.