A few months ago I posted a picture of my friend Gill's motorcycle with sidecar that she got in lieu of an engagement ring.  This last Friday she went a bit more traditional and got a diamond ring at her (and Jim's) wedding.

The wedding itself was not quite so traditional.  A small group gathered in the back yard, and the bride rode in on the motorcycle with the best man (Max) in the side car.    When the time came to exchange rings, Max dutifully did a "sit, stay" while his collar was taken off and the rings removed from the pouch. (I like how the shaft of sunlight is shining down on Gill, as though giving the Benediction for Above) 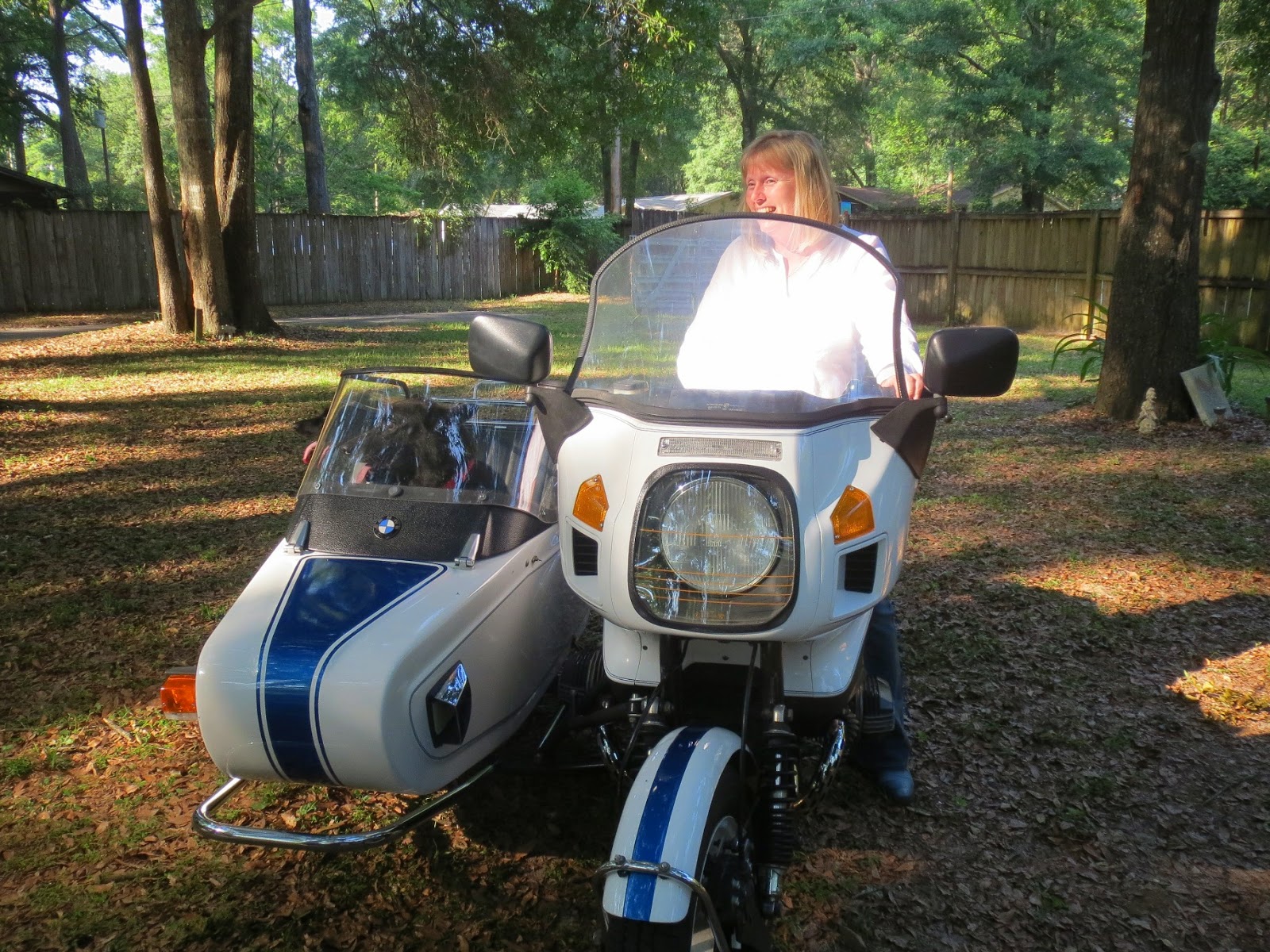 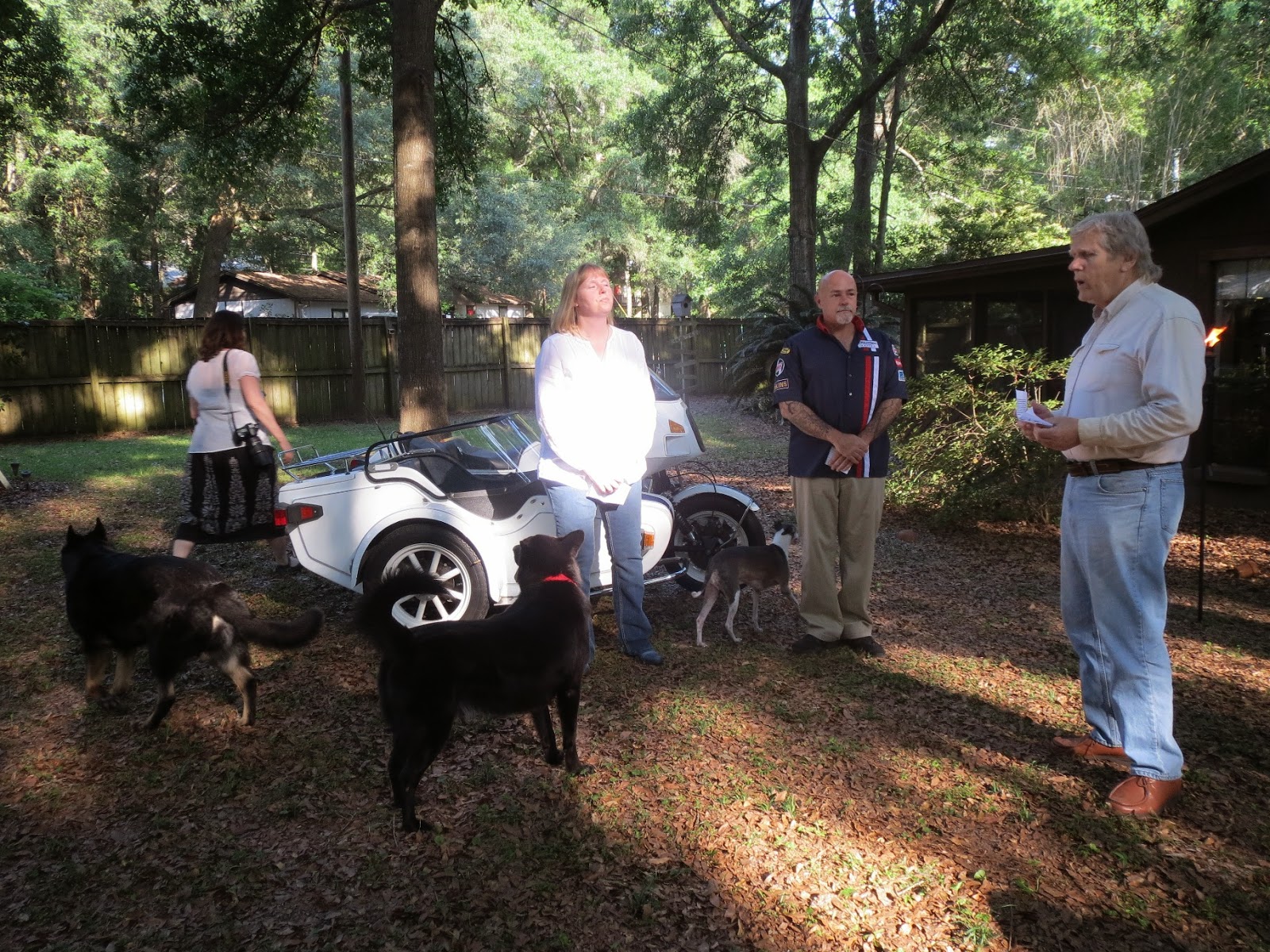 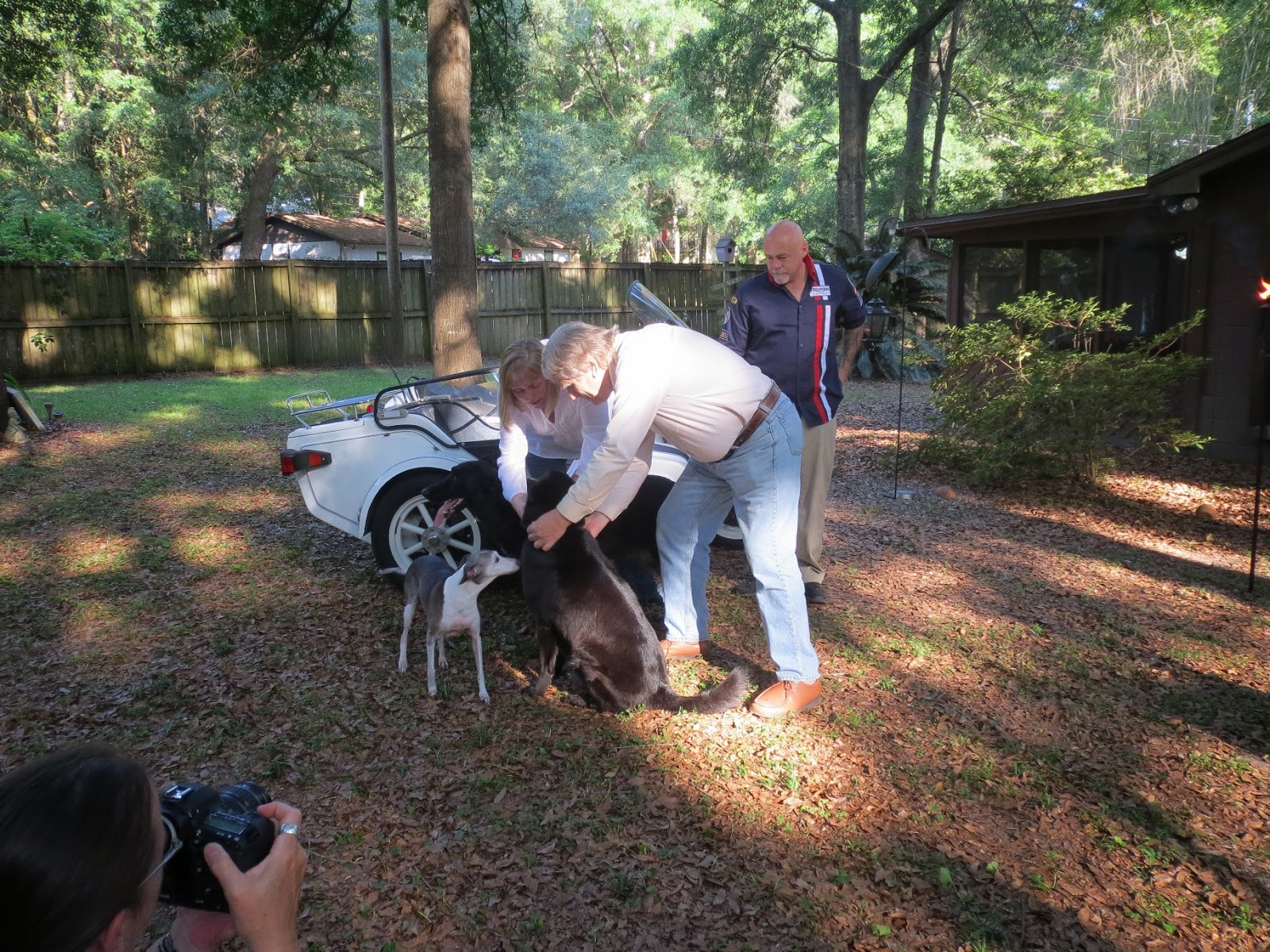 It was the sort of wedding I really enjoy.  Short, sweet, personal.  Small enough group that we all went out to dinner afterwards.

The reception, held the next day, was a little different  (and I forgot the camera).  Gill is usually a completely practical, down-to-earth sort of woman.  But (and I know she can read this) she went a little doolally for the reception, held at the museum, 200 guests.  For one--it was an English themed reception, which called for imported food.  Apparently no one in Tallahassee can bake a proper meat pie, so she and Jim had to drive to Orlando (about a 10-12 hour round trip) to pick up 300  meat pies (different flavors, from steak and Guiness to vegetarian to classic steak-and-kidney).  Kegs of Boddington's beer.  Ribena (black current syrup) and 7-up.  It was when the ice-cream truck drove up . . . .

There is a British treat called a "99" (costs 99 pence) which is a soft-serve cone with a stick of flakey chocolate.  Considering that 99 also just about described the temperature that day, it was quite popular.

So it was a bit over the top--but who wants under the top?   Congratulations, you two.  Love you both.
Posted by Ann at 10:21 AM No comments:

Still catching up, because this dye workshop was actually held on May 3.

It was different for a local workshop--because I wasn't teaching it  :-)    A dyer from Gainesville came up to visit friends and give the workshop.

Specifically, it was a mordant workshop.  Natural dyes won't attach themselves to yarn or fabrics very well without a mordant--from the Latin word meaning "to bite."  This workshop was to show how different mordants can affect the colors.  Actually, we were just using two--alum and iron, with different proportions of blends of the two.

The mordants were thickened and then painted onto the cloth--pure alum on one end, pure iron on the other, blends in between.   You can see the iron mordant easily, because it's another name for "really rusty water." 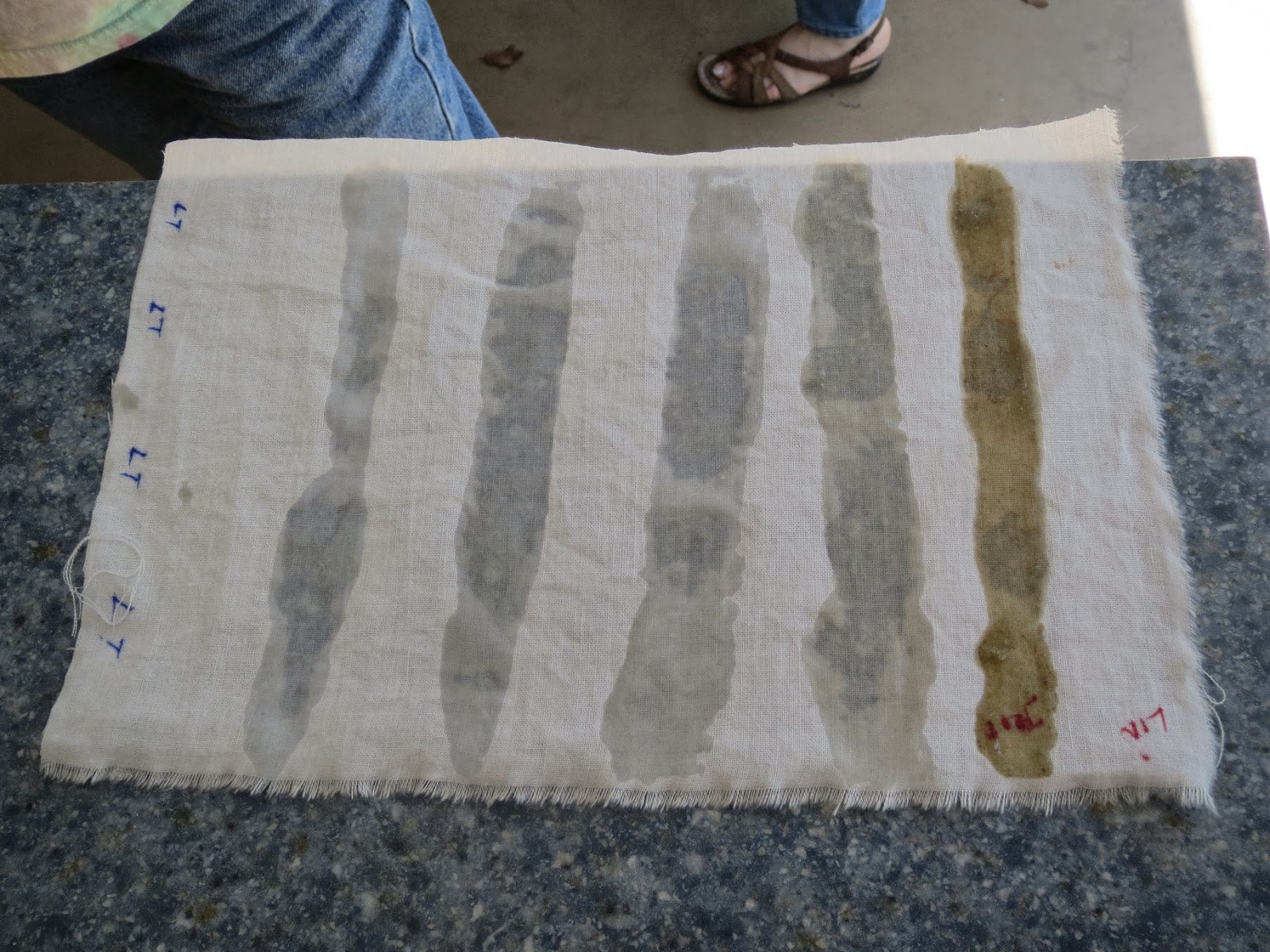 After the mordents dried (we used hair dryers, sometimes blowing a fuse at our hostess's house when we were all working at once) they were put into various dyepots (onion skins, cochineal [a bug] and lac [another bug] for a half hour.  Rinsed and dried, we could easily see the mordant effect. 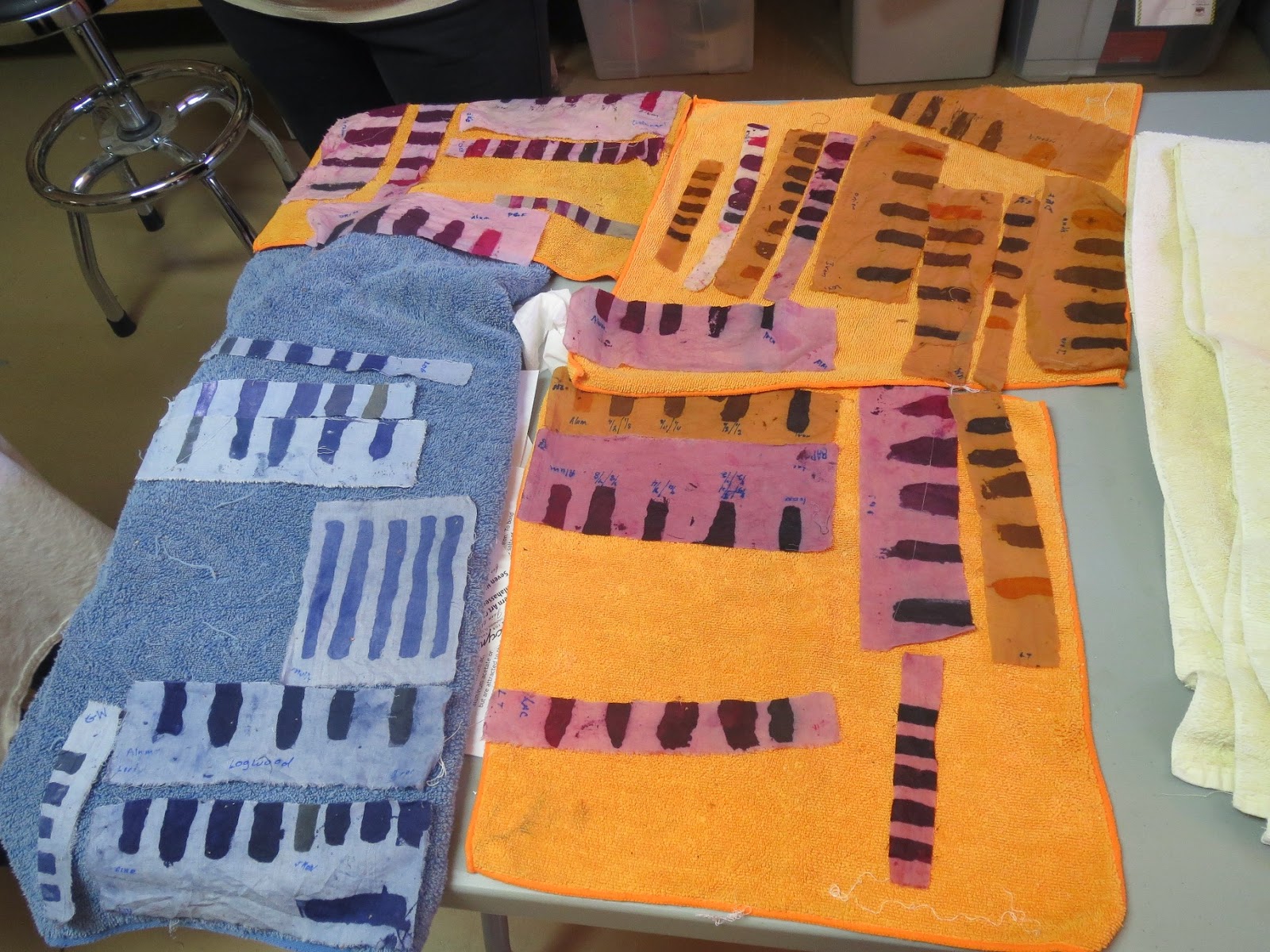 For my final sample, I used an old wood printing block to print a design in the iron mordant, then used a Q-tip to dab alum around the print.  The final result needs isn't terribly inspiring, but it does show the possibilities. 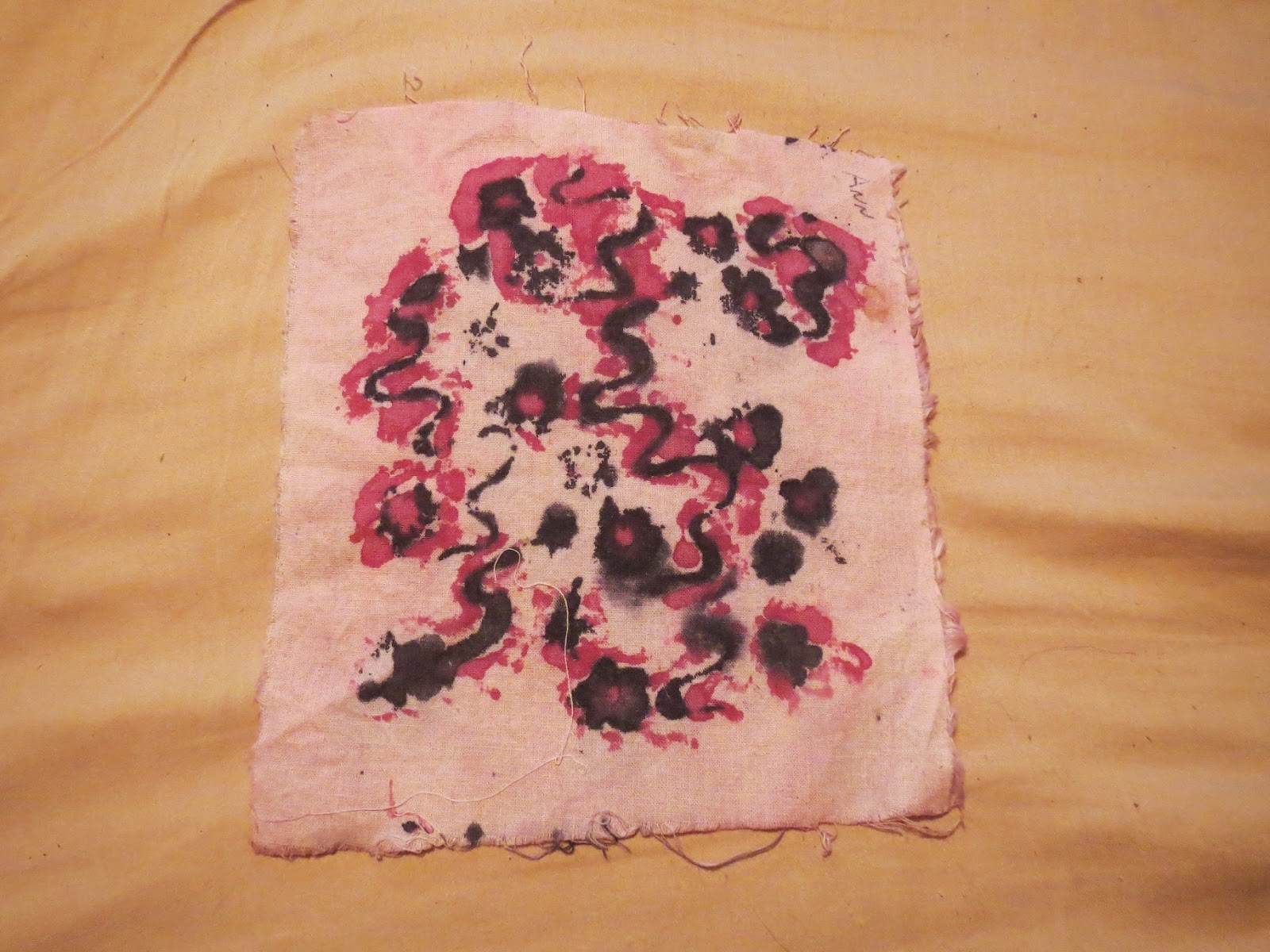 This was just a few days after I got kitten Wilhelm, and I tried not to let him be a distraction by keeping his basket away from the activities.  Didn't work very well--he was often passed from person to person (alas, I didn't get pictures).  No problem with him being socialized.

But to show how even letting a couple of weeks get away from you will let things change a lot, here's Wilhelm taking a nap in my hands. 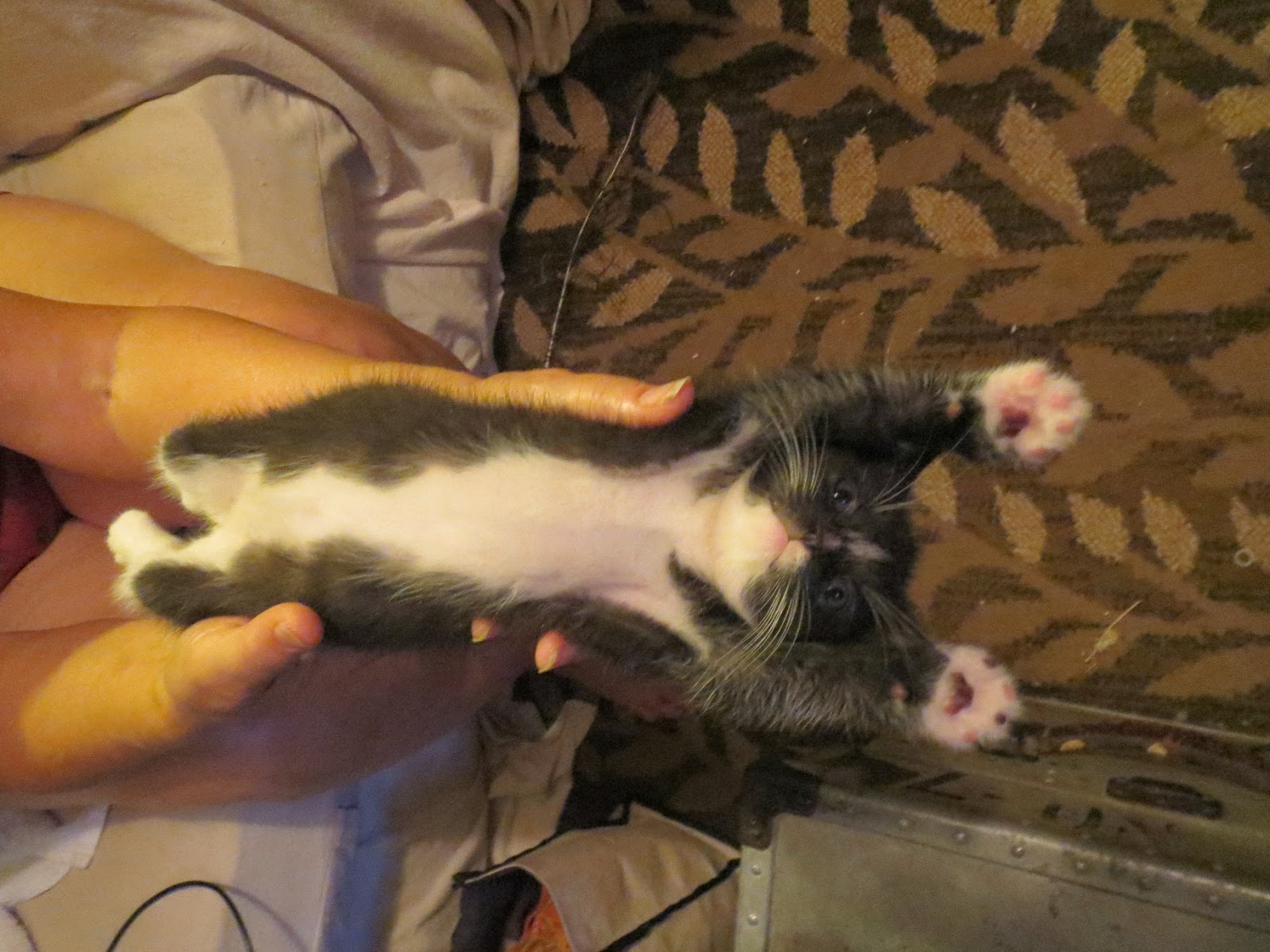 And here's our formerly itty-bitty chicks, now out in the chicken coop. 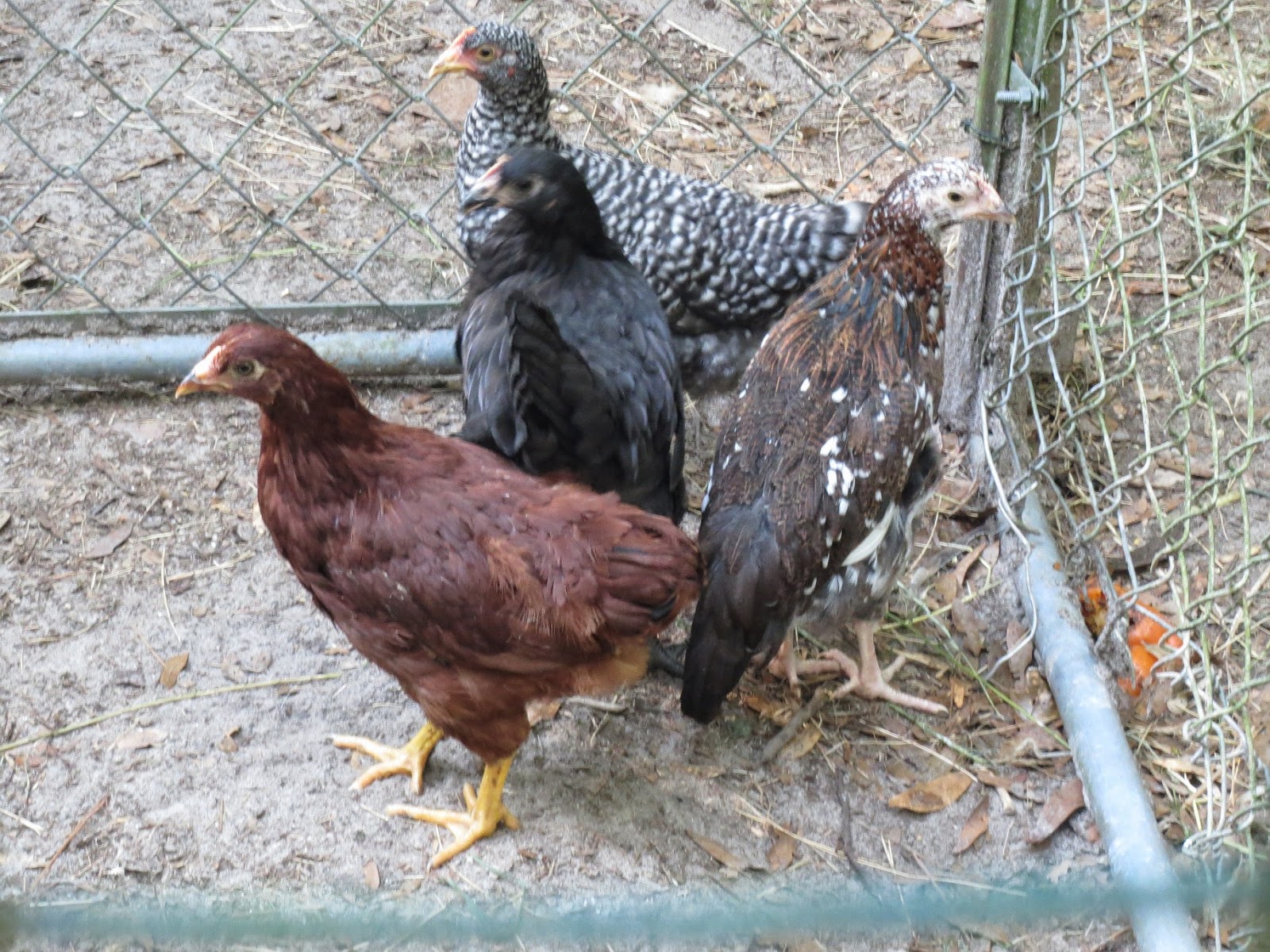 Well . . . . the road trip was about two and a half weeks ago.  But nonetheless, we took a road trip, and it wasn't for a scale model show.  I was cruising the web about a month ago and saw that there was a fiber festival in Montgomery, Alabama at the end of April.  Montgomery isn't exactly next door--but neither is it across the country.  It's about a 4-hour drive away--just at the outer limit of what we'll do for a day trip.  But I haven't been out of town since August, and I haven't been to a fiber festival in three years (well--not quite.  There have been a couple of small alpaca festivals in town).  So I cajoled Bob, and with the promise of barbeque we hit the road.  He even took Friday off so we wouldn't have to go on a busy Saturday.

It was a little tricky finding the festival.  Montgomery apparently saves money by not having road signs, so we took a few side trips.  The fairgrounds also didn't have a sign, nor did it post its address anywhere.  So there was another bypass and turnaround and we decided the large coliseum building was probably it.  There wasn't . . . um . . much going on.  The coliseum was empty.  We walked around back and there was some other buildings--still no signs.  I was starting to apologize to Bob when we walked into one and voila!  Fiber Festival! 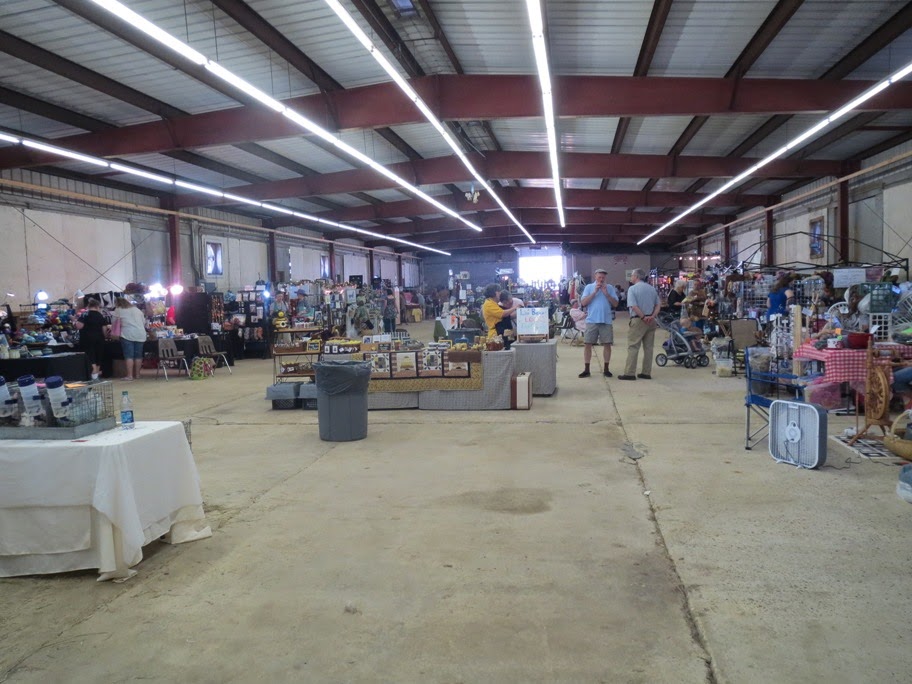 Not huge, but big enough.  While it is possible to order fiber through the mail, you never know what you're going to get.  Fiber is tactile--you not only see it but feel it, letting it slip between your fingers.  It satisfies the hunter-gatherer need that no click of the mouse can.  And being as we had driven all that way, I had to buy enough to make the trip worthwhile, right?

And there were some cute animals, of course.  At first I thought the green bunny had just been in the humid south for too long, but it turned out to be food coloring (there was an orange and a pink one also--the owner had let her grandkids dye them for Easter).  And some alpacas that just looked silly after being sheared. 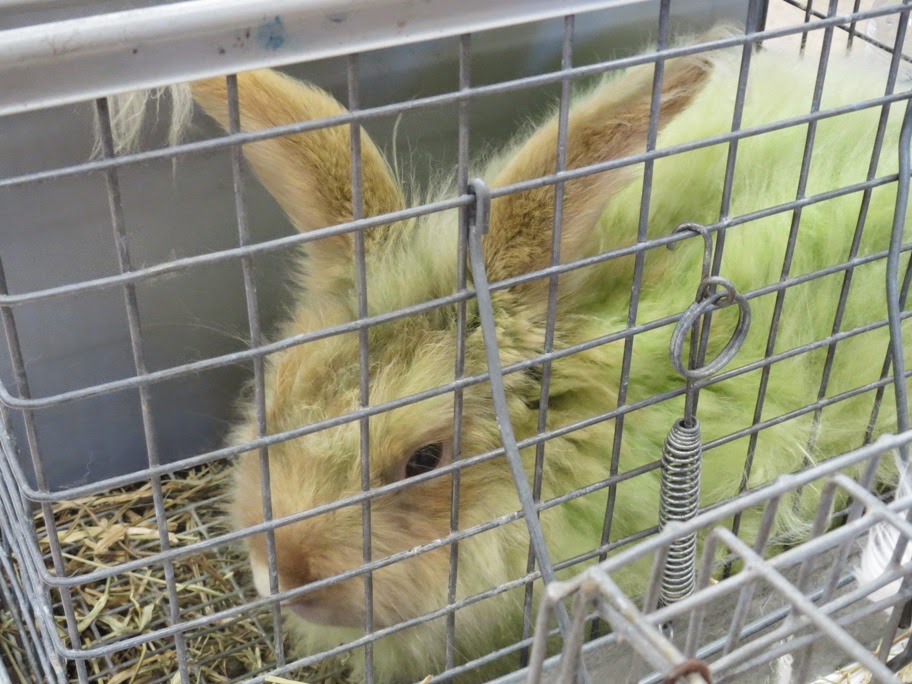 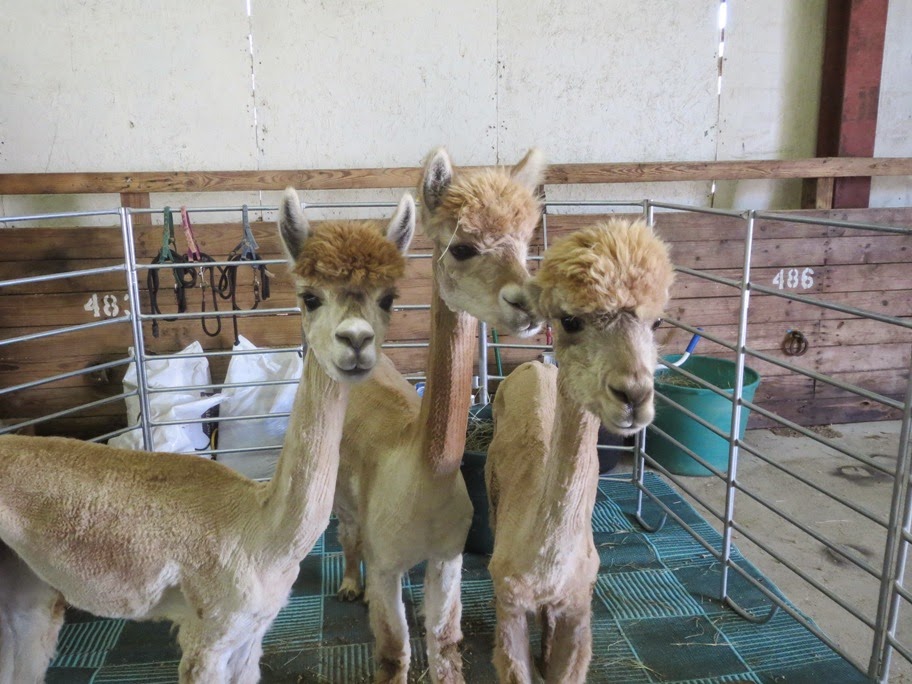 And there was the fiber.  This show was small enough that I could shop the way that I like--go around and look at everything, then go back around a second time and gather.  So here's my swag:

A blend of camel down and silk.  As always, pictures don't do justice.  This looks (and feels!) like caramel whipped cream and I just want to roll around in it. 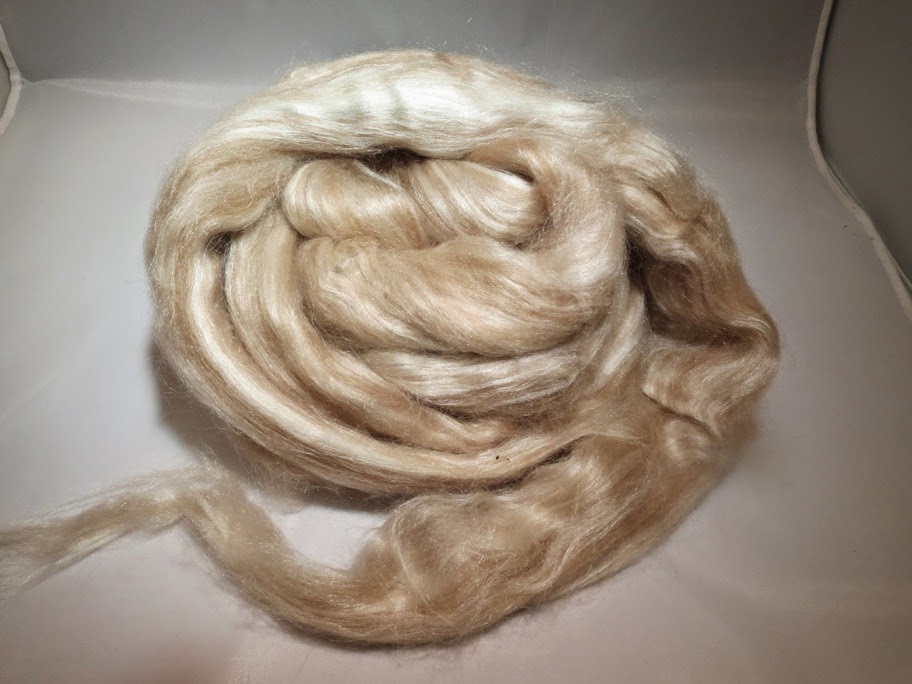 This is a merino/tencel (a type of rayon) blend.  Soft and shiny--and a gradient muddy green.  I love mud greens--olive, khaki.  I keep thinking I'll break away, and it keeps being the first color I reach for.  The woman who dyed this said the inspiration was pond scum--but she couldn't call it "Pond Scum" so it's officially "Asparagus."  Personally, I like Pond Scum. 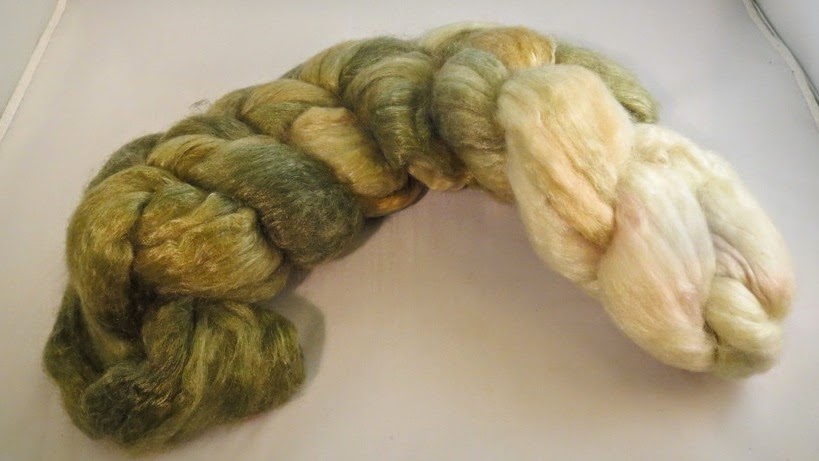 This is bamboo (rayon made from bamboo).  Again, soft and shiny (when it comes to fiber I'm part magpie).  I love the copper color.﻿ 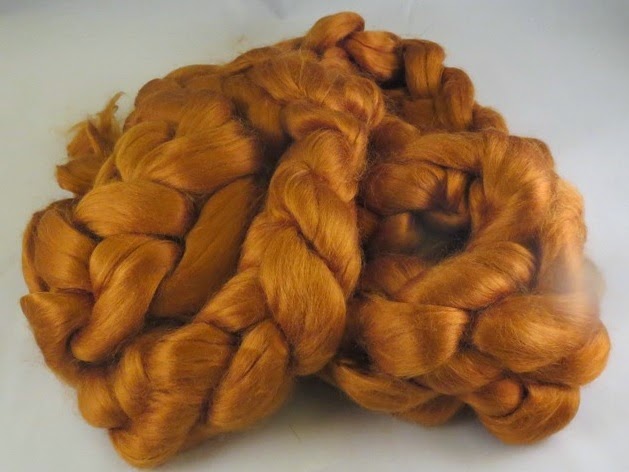 This is an alpaca/wool blend from Chasing Rainbows dyeworks.  She does amazing colors.  I purposely put down the muddy green rovings (that's what combed fiber is called) and got some red (but it's a shade that will go nicely with green . . .)

And just for fun, some sari silk.  This comes from sari factories--to be honest, it's probably floor sweepings.  All the leftover silk thread is heavily carded to break it back down into fiber.  It will make a lumpy-bumpy yarn, but it's still silk and it's colorful. 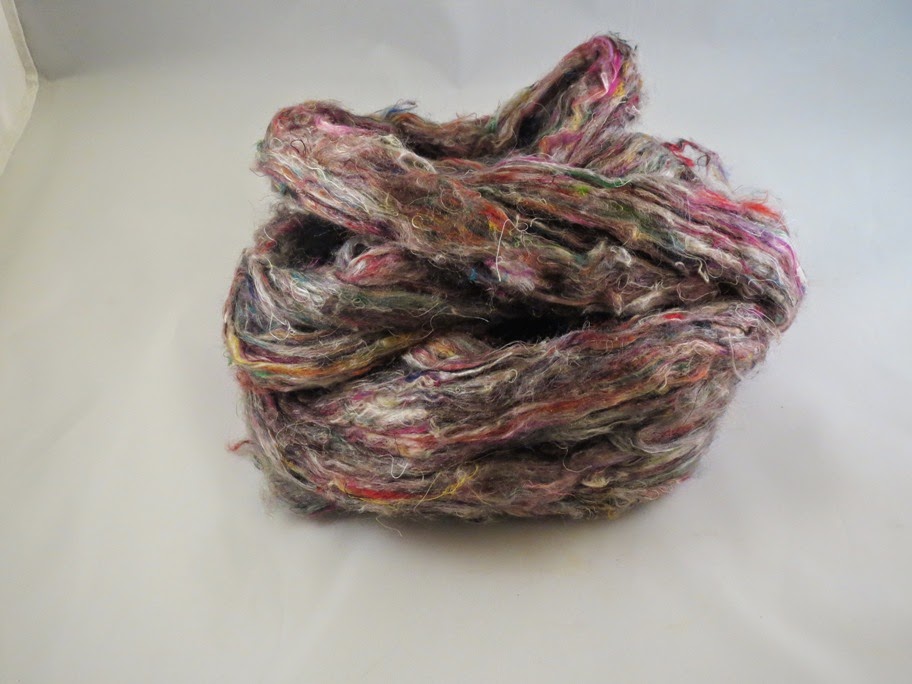 And finally, a tool that I didn't need.  When you're measuring your yarn, it's done as "wraps per inch" (WPI).  Wrapping it around a ruler works just fine.  But some woodworkers make  WPI tools--a turned piece of wood with an inch-long indentation in it.  As I said--a ruler works just as well.  But look at this wood--silver spalted maple.  Just so beautiful.  And it feels nice.﻿

And what will I do with all this?  Put it in the stash.  I have now reached a condition called "SABLE" - Stash Acquisition Beyond Life Expectancy.  It will be admired, and fondled, and samples spun.  And maybe it will get spun and turned into something--or not.  I'm rather like a miser who enjoys playing with his pretty gold coins more that he would buying anything with them.  I have luxury literally at my fingertips.  My precious  . . .

Back to reality--Bob was promised barbeque on the way home.  We had passed a likely possibility on our way to the festival.  There are hints about a place that good barbeque will be found inside.   It should look a bit lived-in (a nice way of saying slightly run-down), and there should be a patriotic saying somewhere (note the "We Support Our Troops on the wall). 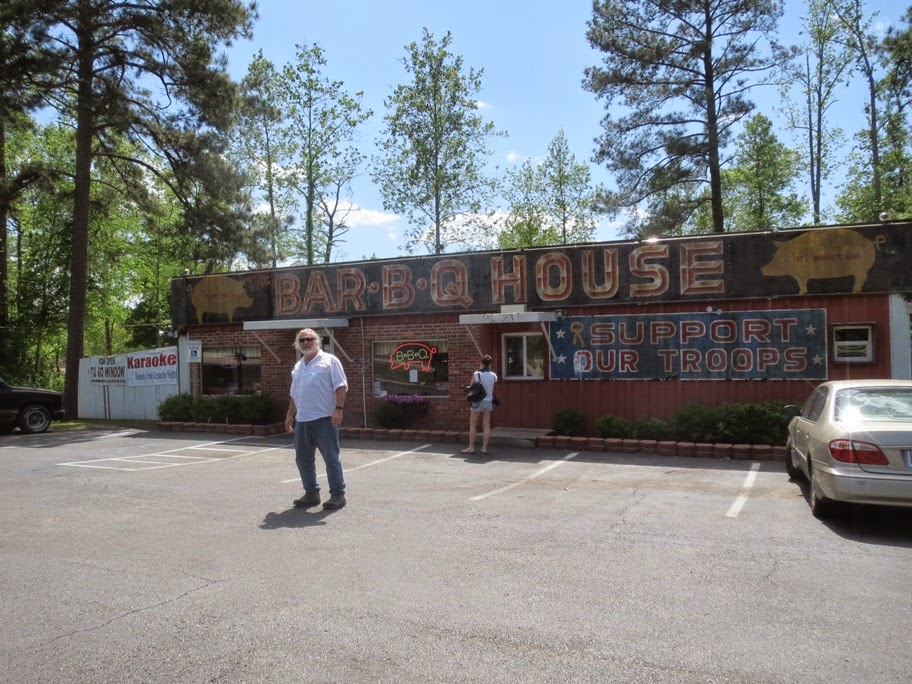 There should be a happy pig somewhere:﻿ 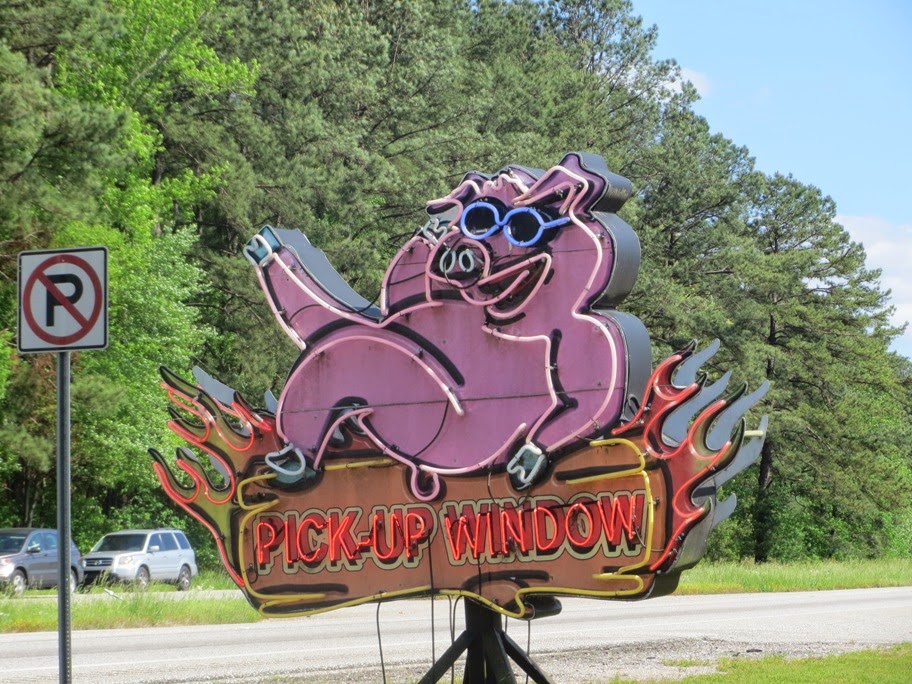 And it should be world famous. 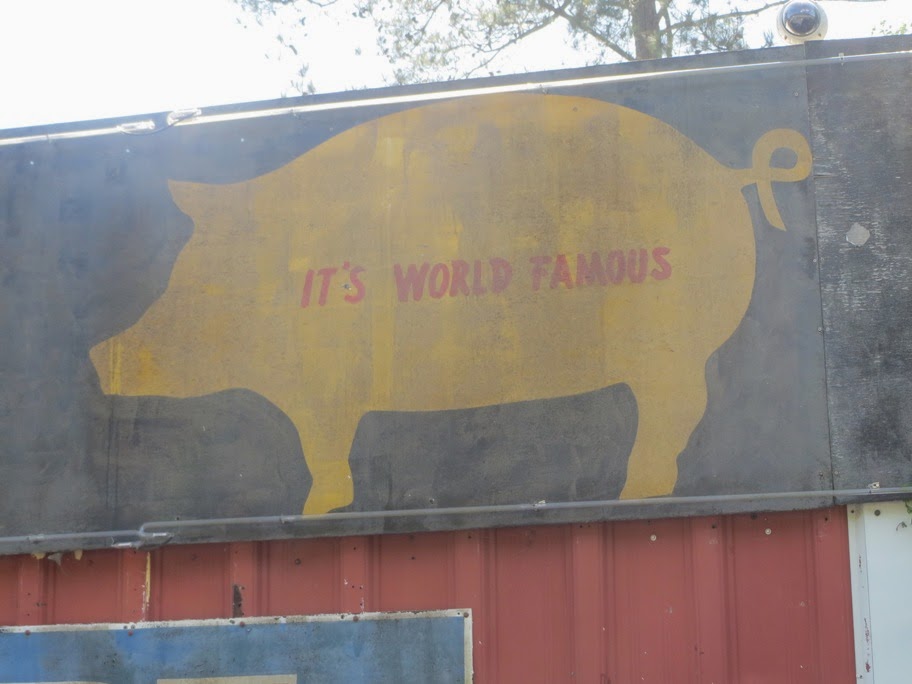 And when we walked in, the waitress had big hair, called us "Honey," and all the side dishes except for the cole slaw were deep fried.  It met expectations--the ribs just sort of slid off the bones, and the corn nuggets and fried okra were crunchy on the outside, tender on the inside.

And we got home safe and sound.  And a week later we got tiny Wilhem, who is looking oddly mature in this picture--a hint of the fine cat he will become (but not yet--it's time for his bottle). 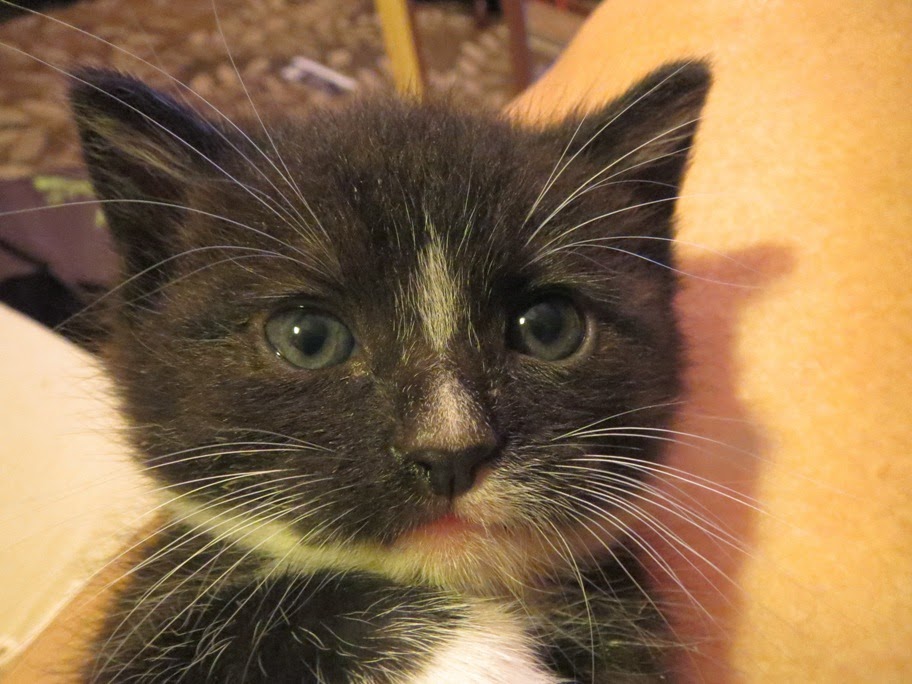 The new kitten went through a few potential names.  We really wanted to call him Prospero (as in "The Tempest").  But it just didn't stick.  We auditioned a few others (He was almost Stormageddon).    He is now Wilhelm.  The rationale is a little circuitous but here goes:

Think of any movie/TV show where there's a certain amount of chaos--say, a car goes out of control and crashes into an alley, and among the crashing of garbage cans and breaking glass there will be a cat's indignant "yrowl!"  The new kitten is very good at making that exact sound--good set of lungs for such a little guy.

Now think of any movie/TV show where someone gets shot off of a horse, or thrown out a window, or falls off a cliff.  There is very characteristic scream--so much so that it has it's own name--directors can just annotate a script with "Wilhelm scream here".  Listen to the "Wilhelm Scream Compilation" on youtube if you want to see how ubiquitous it is.

So by extrapolation, the cat "yrowl" is called a "Cat Wilhelm".

Told you it was circuitous.

It's hard to take pictures--he's a moving target. 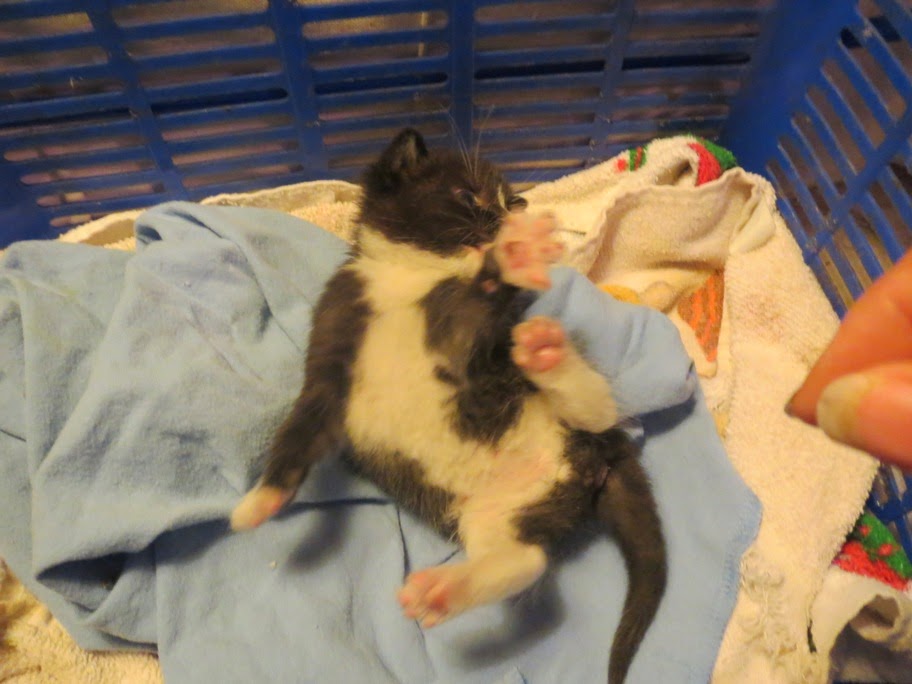 And he keeps up his energy by being very focused when it comes to mealtime. 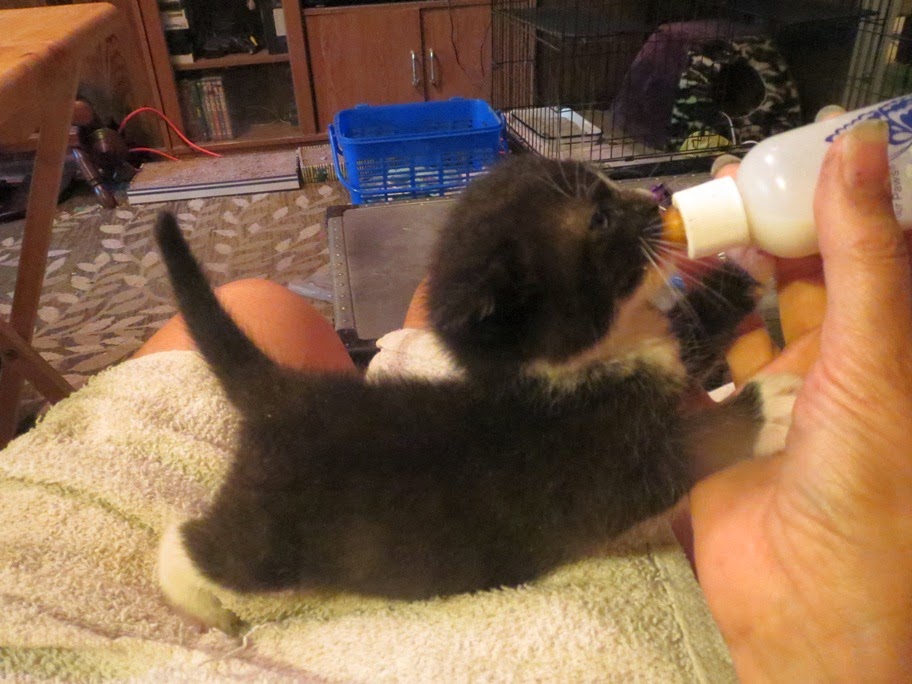 I have to enjoy this extreme cuteness while it lasts--he's growing so fast.  He was 10 ounces when we got him last Wednesday.  A week later and he's up to 15!
Posted by Ann at 2:37 PM No comments: