A Tale of Two Socks

Some projects fight you all the way through.  Others go well from start to end (those make me nervous because I keep wondering when they'll go wrong).  Some start out with problems, then give up and give in and go well.  Some go well from the start and then turn on you.

Mom's socks were in the last category.

Many years ago I knit her a fancy pair of wool and silk lace socks.  And they finally got a bit holey, so I figured it was time for another pair.

The spinning went well.  My post last December showed my setup of spinning wheel, book stand, and warm fire.  Knitting the first sock went well--despite the fact that my main knitting time is in the car when Bob and I are carpooling, which may not be the best time to try to knit lace with wee tiny size 0 needles.

The problem with knitting socks is that when you finish one, you have to turn right around and make another one.  Some people get around this by knitting both socks at the same time, either with two sets of needles or a weird convolution with both socks on a long circular needle.  One friend simply never bothers to make matching socks and just wears whatever two socks strikes her fancy at a time.

But I hoof it old school--finished one sock, cast on and started the next.  Everything was going well until I was about halfway through the foot and realized that I was knitting the lace all around instead of just the top of the foot.  Oops.  Nothing for it but to rip it out and start over--in a few weeks.  Guilt finally overcame annoyance and I started the second sock.  It went well--through the foot, over the heel, and halfway up the leg.  That ball of yarn ran out and I spliced in my second ball.  After three rows I realized that the second ball was spun much finer than the first, and the difference was obvious.  I laboriously unpicked the three rows and then eyeballed the too-skinny yarn--and decided that I could use it if I doubled it.  So I ran it through the wheel and got back to knitting.  It worked--because I know there's a difference, I can tell where the new yarn is, but I don't think anyone else could if I didn't point it out.

But now there was another problem--by doubling the yarn, I had halved it's length.  As I knit along, the sock grew slowly and the wee ball of yarn shrank quickly.  I found myself doing marathon knitting, thinking that if I knit fast enough I would finish the sock before I ran out of yarn.  I *almost* made it--there's not quite as much ribbing on the second sock. 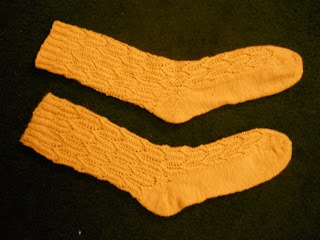 My first reaction was "but where will we go?"  For us, Border's is not so much a store as it is a place--our place.  For the past decade and some, our idea of a "hot date" has been to go to Border's for a cup of coffee and a wander through the books.  Every errand trip into town has included a stop at Border's.  We have our prescriptions done at the CVS next to Border's, so we can take a browse while waiting for them to be filled.

If we're running errands and end up with time to kill before the next appointment, we go to Border's.  We go there to reward ourselves after a trip to the dentist or doctor.  I've spent hours there knitting with my friends.  If Bob wants to go to a gun show, Border's will baby-sit me until he is through.  If I'm feeling down, I can have a steamer (warm milk with flavoring).  If it's a weekend, then we go for the latte with the flavorings and whipped cream and sprinkles on top.

We're not alone in mourning the loss.  I've overheard people in the store saying that it's like going to a funeral, or losing a friend.  Today was the last day that the cafe was open--the last day I get a coffee there and wander through the books.  The store itself will be closing soon.  I hear things like "where will I study for finals"?  "Where will I play chess?"  "Where will I spend my lunch breaks?"  It has been a haven for so many.

It's hard to accept that it's not our place, or a community center, or a haven.  It's a store.  And what I haven't heard is "where will I buy books and magazines?"

We've seen a lot of abuse of the store.  People who bring in food and drink from somewhere else and settle at the tables to enjoy the air conditioning and free internet connection.  People who look over the books, decide what they want, and then go home to do an internet search to buy it cheaper online.  People who sit comfortably and read a magazine cover-to-cover and then put it down and walk away.

Being a haven doesn't pay the bills.  The store is closing.