From Painting to Possums and Points In Between

My gracious, some weeks do get busy.  We've been in negotiations with a contractor  a couple of weeks to get the house painted, and got the call Tuesday afternoon that the painters would be coming out Friday to do the pressure washing and prep work.  Which was great--except that we'd thought we'd get a wee bit more warning.  There was a bit of work that we had to do before they could get started--like move our storage cabinets and furniture off the front porch, take down various lighting fixtures (and mask off the outlets), take down the hummingbird and squirrel feeders . . .

Which was fine, because we're retired and have nothing else to do, right?

Backtrack a couple of weeks.  I had been experimenting with making worbla.  Worbla is a sheet of material composed of sawdust and thermoplastic--you heat it up and shape it.  Costumers use it a lot for things like masks and armor.  Problem is--it's really expensive.  But there's stuff called Friendly Plastic (meltable, moldable, reusable plastic) and sawdust is easy to get (flour can be substutited) and  you mix the two and roll it out.  So I've been making it, and playing with it, and it's really great stuff.  Being me, I like to share, so I contacted the local Maker Space and asked if their members would like a demo.  I get a message Tuesday afternoon (yes, the same afternoon that we find out about the painters) saying yes, of course.  "Can you come see me at the open house tomorrow night?  and can you bring something that you've made so we can get some pictures?" 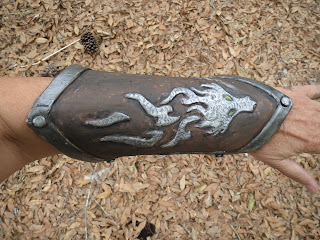 Well . . . what I've made is the worbla itself, and some odds and ends just playing with it.  I haven't actually made anything.  So Wednesday (when I should have been helping Bob, and honestly I did, but just a little), I knocked together a vambrace.  And guess what--for my first Thing, it's really not bad.

But that's OK, because I have Thursday to help with the prep work, right?  Except  . . . 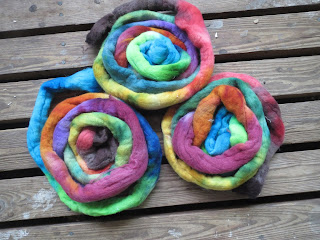 I was teaching the "felt scarf" workshop on Saturday--and I didn't have enough dyed wool.  I like to have a variety of colors for my students, so a chunk of Thursday was spent dyeing.  Fortunately, there's a lot of down time when dyeing--the stuff has to soak, get steamed, sit and cool for awhile--so I was able to pitch in and get stuff moved (like the kitchen last summer--most of what came off the porch isn't coming back).

(The workshop went well, four people made scarves they were happy with, and I accidently hit video on my phone instead of camera so don't have final pictures).

So after getting everything ready, the workers show up Friday--the equipment breaks down, and they leave again, giving us a free day.  Sigh.  They did get the pressure washing done on Saturday.  And we went to town to buy the paint, only to find that they didn't have the proper base to tint (the house is getting painted *beige*.  What paint store doesn't have the base for beige??) so Bob had to go back Saturday (because I was teaching my class) to get it.

But Monday the great transformation began. Twenty years ago I would have been painting it myself--but it was sort of nice just to let someone else go up the ladders.  It felt weird to be in the house while people were working on it, so I spent the next couple of days down in my cottage, working on my loom model and making a blanket 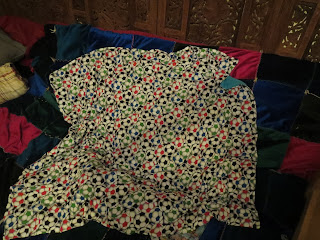 for my grand-nephew Zeke.  A few posts ago I wrote about making a weighted blanket for my niece. I had a few pounds of the pellets left and the blankets are supposed to be good for toddler.  Awhile back I had picked up the fabric--he plays soccer, so I got a soccer ball print.  At the time I messed up--got enough for the front--but they do have two sides.  So later I picked up a solid for the back.  Thank goodness for mistakes!  It didn't occur to me that trying to sew straight lines on a pattern with lots of circles would drive me crazy--so I worked from the back side.  It went smoothly, except for the last row when I ran out of bobbin thread without noticing, so the pockets I thought I had sewn shut weren't, and little plastic beads went flying everywhere when I picked up the blanket.  I'll be finding those for the next few years.

And the painters finished today!  What a tremendous difference. 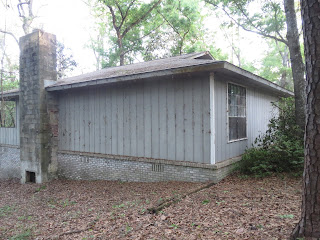 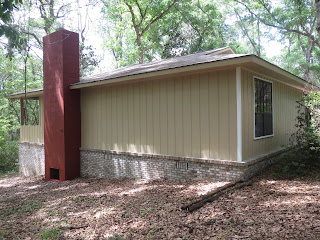 And to keep things interesting, I got a call from a co-worker that she had spotted a dead opossum on the road, but it looked like the tummy was moving.  She checked--and there was a live baby in the pouch (I have awesome co-workers).  Here is my first foster of 2017. 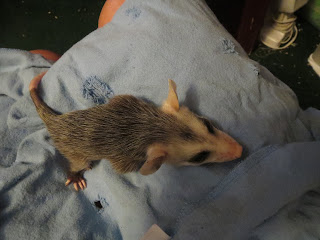 Reading:  Neil Gaimen, "American Gods."  I saw that this is going to be a mini-series started at the end of this month so wanted to reread it.  I'm curious to see the adaptation--it's a very convoluted and complicated book.

I Have the Touch of Death

Bob came in with something in a yogurt carton.  "I just got a baby snake away from Wilhelm." 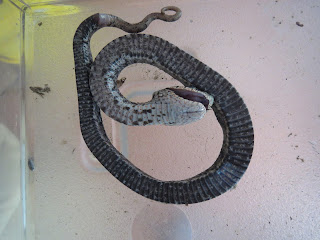 I looked at the poor thing.  Then our conversation went something like this:

Bob:  I think he might be OK.  There aren't any marks on him.

Ann (poking at limp and unresponsive snake):  Looks pretty dead to me.

Bob:  He was moving a few minutes ago.

Bob was right on all counts.  He was a hognose, and he was fine.  The hognose snake is famous for "playing possum" when threatened.


We finally decided that we should quit poking at him, even though it was fun to watch his act (honestly, we were trying to check him out for any injuries).  He quickly came back to life when we let him go. 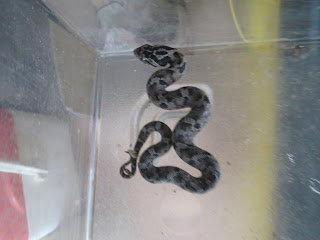