We continue building curoisities for the Cabinet of Curiosities.  My Inca mummy took a giant step backward.  I had gotten him to the stage in the last post, put his legs back on, and folded him (Inca mummies were usually in the fetal position.  So I folded him--and he just looked sort of like a Halloween prop folded for storage.  I decided that he was too straight--he needed to be twisted.  So I did some surgery--sliced him up the back, peeled back the paper mache, and aimed a heat gun at his plastic spine.  When it was soft, I gave him a mighty twist.  So then his posture was right--but I had rather destroyed the mache on his torso--that was three days to get it re-done.  But he looks better now and I should have him done in about a week--I had to mold his hands, and mache the bent joints, and do a lot of painting. 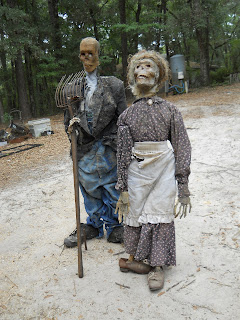 Years ago, Bob made Fred and Ethel, a pair of mummies based on the American Gothic couple.  He fished them out of the rafters and fixed them up and they are now ready to stand guard outside of our display (which will be in a 1930's one-room schoolhouse.

I even knitted a prop.  Not quite the fancy lace that I usually do (and it's not even handspun).  But I saw the pattern and couldn't resist giving it a try--it's just so wrong. 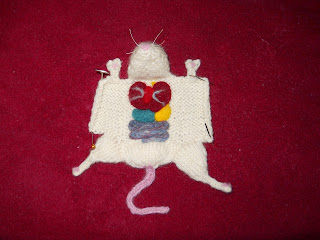 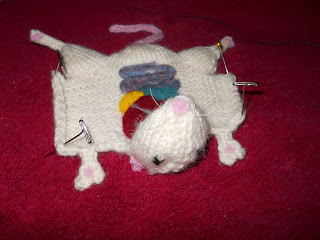 There are more props in the pipeline, so stay tuned. 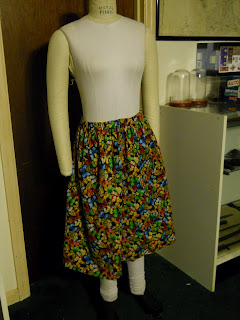 Not all has been Halloween--I got some pretty fabric with butterflies, and while I was waiting for the mummy to dry, I whipped up another skirt for Mom  (skirts like this are convienient because any pattern shirt you have will go with it)

﻿
Finally, the required cat picture.  Fiona surprised us--she is not fond of other cats.  She usually does not acknowledge the existence of other cats in the household.  If she does, it is to leave in a huff or slap them to make them go away.  But apparenly NokoMarie sneaked up on her while she was asleep. 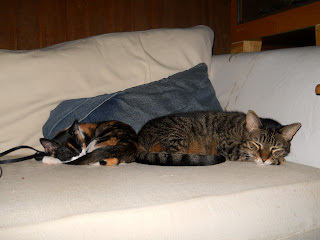 Today we're off to an alpaca festival--stay tuned!
Posted by Ann at 6:26 AM No comments: