I am so over painting kitty litter buckets.

Those of us with multiple cats go through a *lot* of kitty litter.  For some reason, the least expensive decent litter comes not in bags or cardboard boxes, but in nice sturdy plastic buckets. Of course, the Tidy Cats label is sort of lacking, aesthetically.  Bob found out that with some acetone and a lot of scrubbing it will come off, but the yellow-and-red color scheme doesn't do anything for me.  But with spray paint and a label, you end up with a pretty decent looking storage bin. 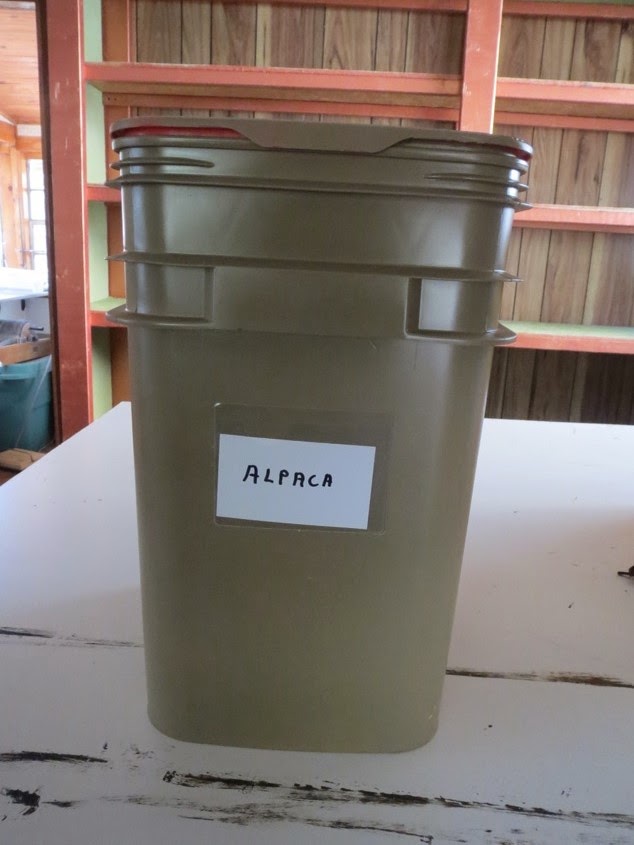 But I had picked up 3 cans of spray paint, figuring that one can would do about 2 buckets.  Turns out one can would do 3 1/2 buckets, so I ended up painting 10 1/2 buckets (did I mention we have a lot of cats?)
And then, the labels.  Arrgh.  For once, I was willing to be a consumer and not a producer.  In other word, go buy something rather than make it.  What I wanted was simple--label pockets.  Clear plastic pockets that stick to a container, and then you put in a piece of paper with the stuff listed on it.  That way, when you change out the stuff, it's easy to change out the label.  My organization magazines say simply "go to the office supply store and buy label pockets."  Hah!  They didn't know what I was talking about.  I finally found some--a packet of 5 for $4.49 which I think is a little high but I bought a pack anyway just to have some.  When I opened it, there were only four pockets in there.  That means I paid $1.10 each for a piece of plastic 3 inches by 4 inches.  And I needed at least 6 more of them.   So  . . . sigh . . .  I grabbed a plastic page protector and a hot knife, cut out the two pieces of plastic that I needed and sealed the edges.  Instant label pocket.  Free. 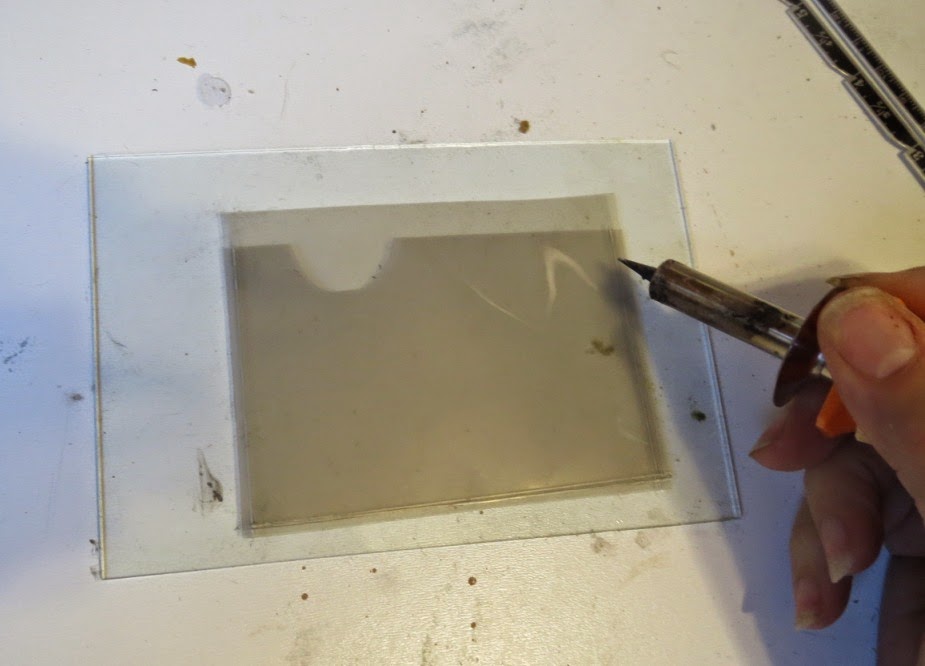 And all of this begs the question--why do I need a bunch of buckets with labels?  It's because the storage shelves in my cottage (aka Chez Wicca, aka The Workroom, aka "The Studio" if I'm feeling pretentious) looked like this. 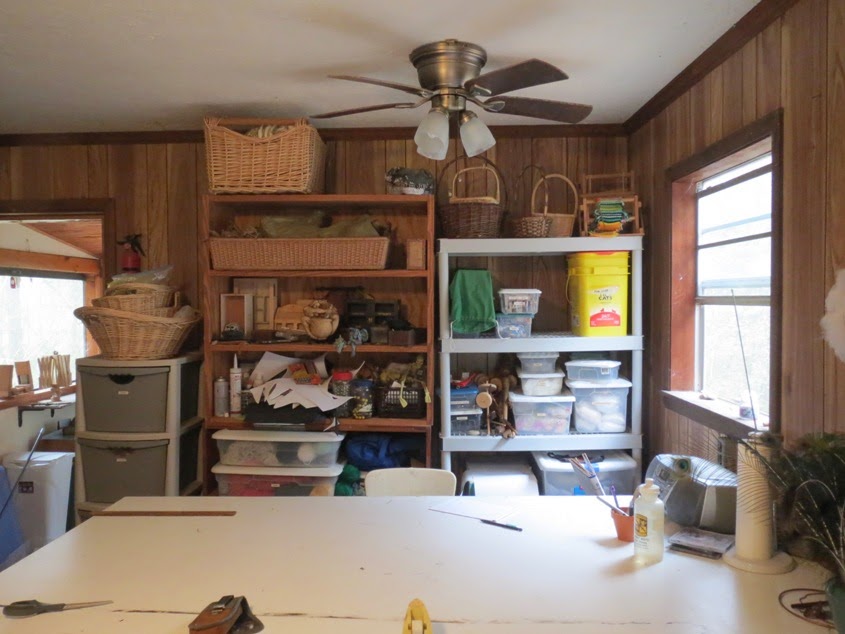 Two mismatched shelves and some stacking bins.  Functional, yes, but not an efficient use of the space  (and actually the room didn't look this good--I had to move a huge stack of stuff still left over from Halloween off the worktable to take this shot).  What I wanted was one big storage unit.  And being as I seem to be unable to buy stuff, I made it.  And I'm rather proud to say that *I* made it--mostly.  Usually when I want to make something big, it means that Bob makes it for me.  This one was about 80/20 (with me being the 80)  (maybe 70/30).
Again--the books say "go to the hardware store and buy 6 2x4's and 12 2x2's and some wood for shelving."  They don't mention that you'll go through at least 25 of the 2x4's trying to find something reasonably straight, and the entire bin of x.2's.  And even then have to come home and sand for a couple of hours.
Then it all had to be painted.  As this was to be a budget job, I looked through our stash of leftover paint.  I had over a half-gallon of the fancy copper paint that we had used on the bedroom ceiling.  I hesitated--that paint had been pretty expensive, and these were just storage shelves.  But then I wondered if it was logical to let the expensive paint dry up and be thrown away rather than use it--so copper it was.  I also found some dark green and white paint and mixed them up for the shelves.
The only place big enough to paint in is Bob's barn, which meant moving out his precious jeep.  Then I had to find a way to stash all of the pieces so that he could get his jeep back in for the night.  The shelving went onto the ubiquitous kitty litter buckets, and I found I could stash the rest by setting out a couple of folding chairs and having three layers--across the back, across the seat, and across the bottom bar. 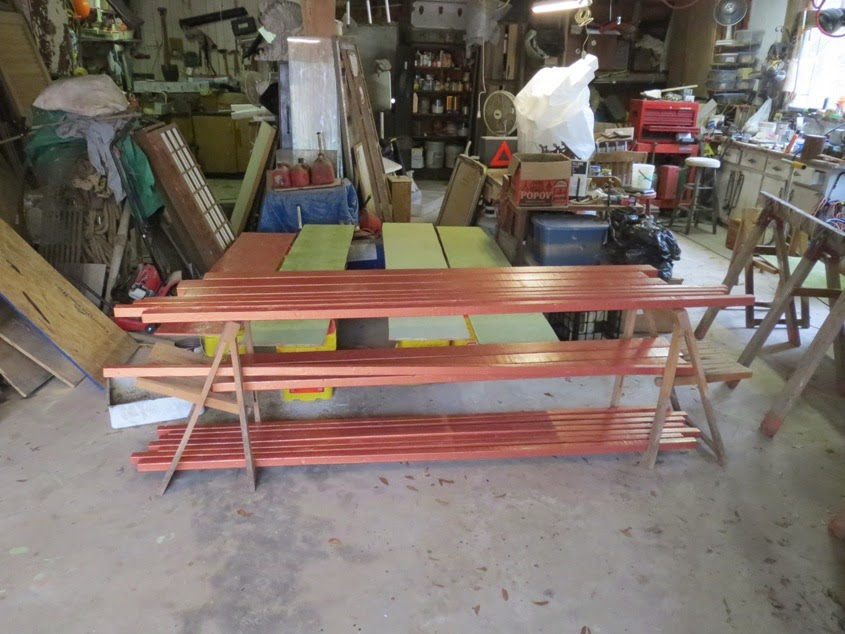 I was actually rather pleased with that.  The next day the jeep was moved out again so I could put it all together.  Despite the fact that the paint was supposed to be "dry to the touch" in an hour, and I had given it about 10 hours--it wasn't dry.  But I didn't have much choice--rain was predicted for the afternoon, and I had to be out of the barn so the jeep could go back in.  So I pressed on--and Bob only complained a little that his measuring tape and electric drill sort of ended up copper colored.
But it's together, and in, and a lot of my stuff sorted into upcycled kitty litter bins, and I have to say it looks pretty good. 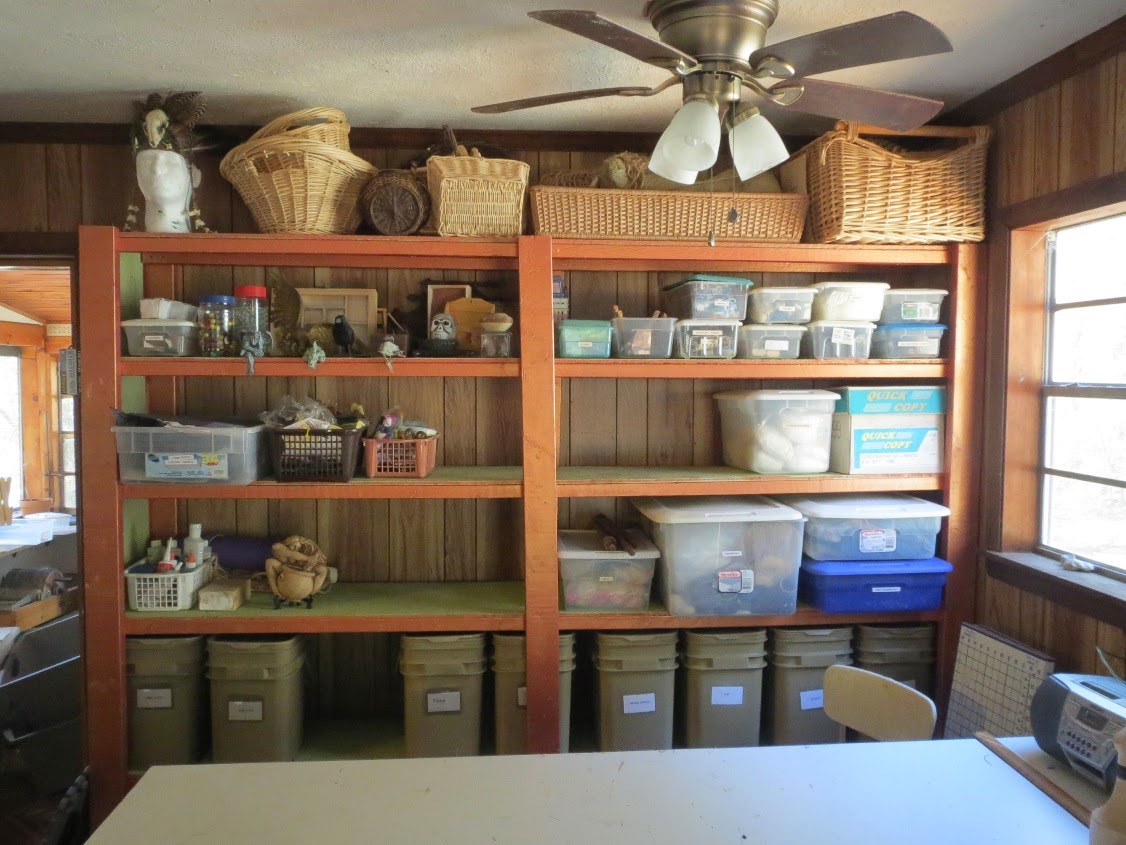 Not only is everything that was on the shelves originally back in place, but even a lot of stuff that was on the table and floor.  And there's still space left!  (That's not going to last . . .)
I allow myself a bit of admiration.
And now it's time to tackle the sewing room  . . .
Posted by Ann at 8:51 PM No comments:

Many people have told us that when you retired you would really never have enough time.  Possibly it's because you go leaping into those things you were going to do "when I have the time."

Project the First:  Tidy up the butterfly garden.  While butterfly gardens should be a bit "rustic," mine was mostly dead stalks and stems.  It didn't take too long to cut/yank all that dead stuff to expose the new green plants coming up, but I had to be specially armed for the process.  I've done this before in my usual "casual home" garb, aka a sweatsuit.  But I end up covered with thousands of sticky tag-along seeds.  So this time it was jeans, boots, and a windbreaker. 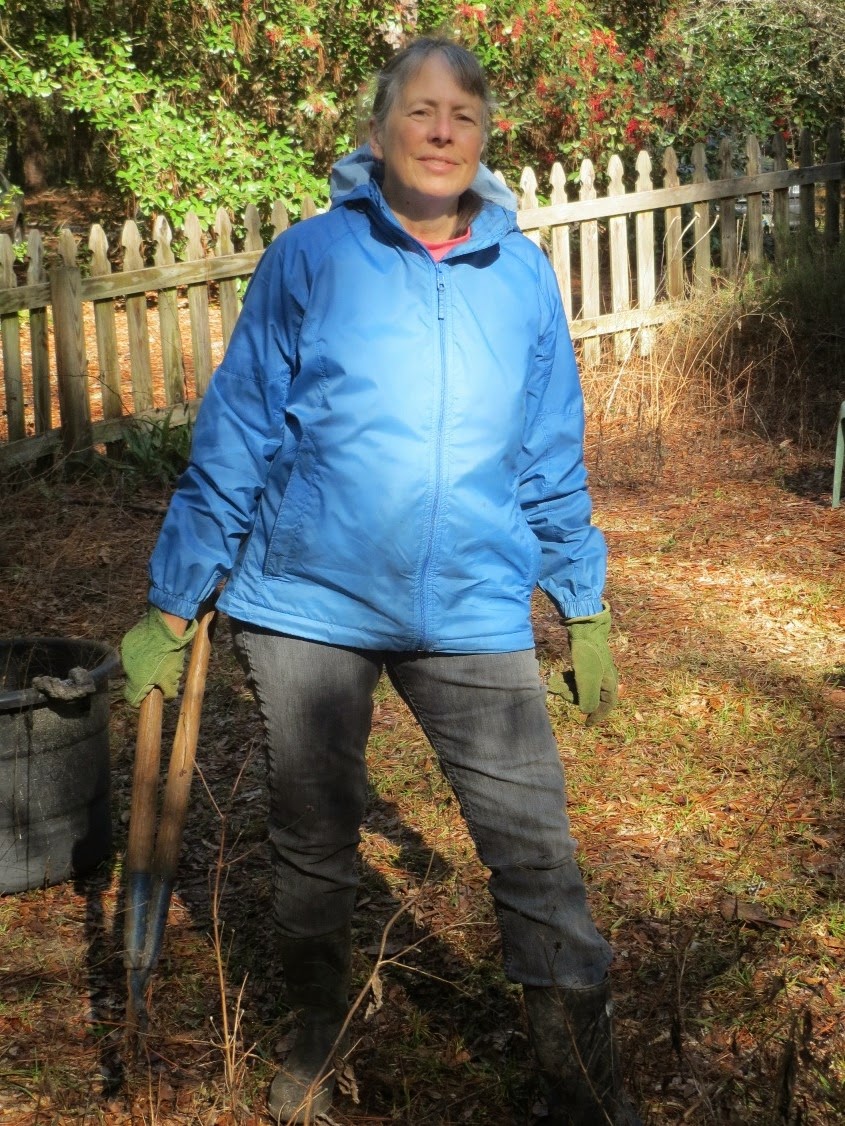 Time for a break after that.  For Bob's birthday we headed down to the coast to enjoy a beautiful clear blue day while the rest of the country was knee-deep in snow storms.  The day didn't exactly go as planned--we were going to go to the fort at St. Marks--but it's closed on Tuesdays.  We went to the lighthouse instead and hiked around a little.  Not too many birds, but we saw a few. 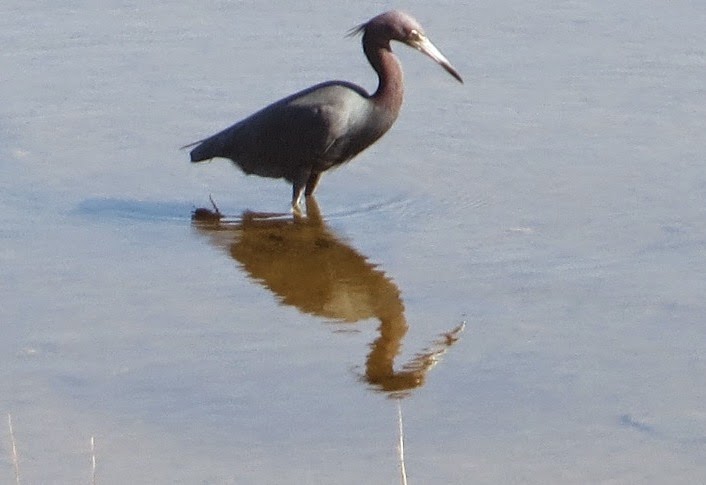 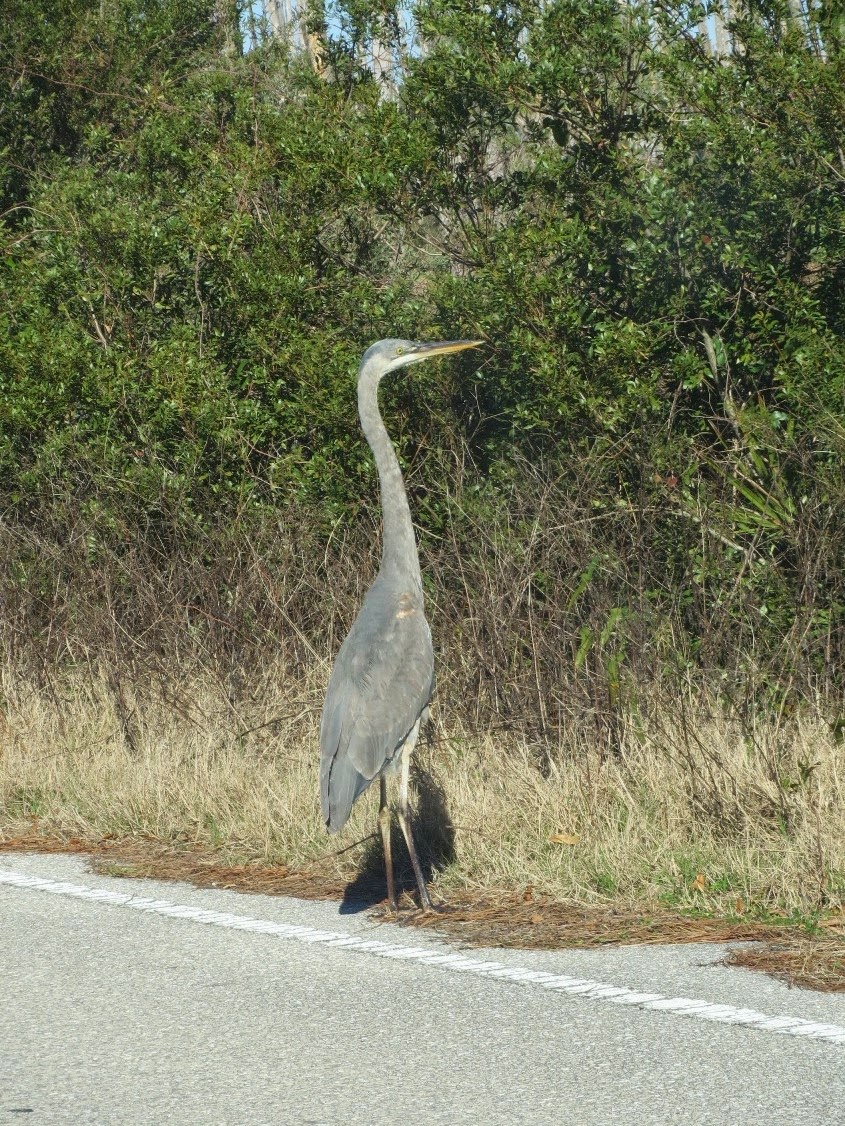 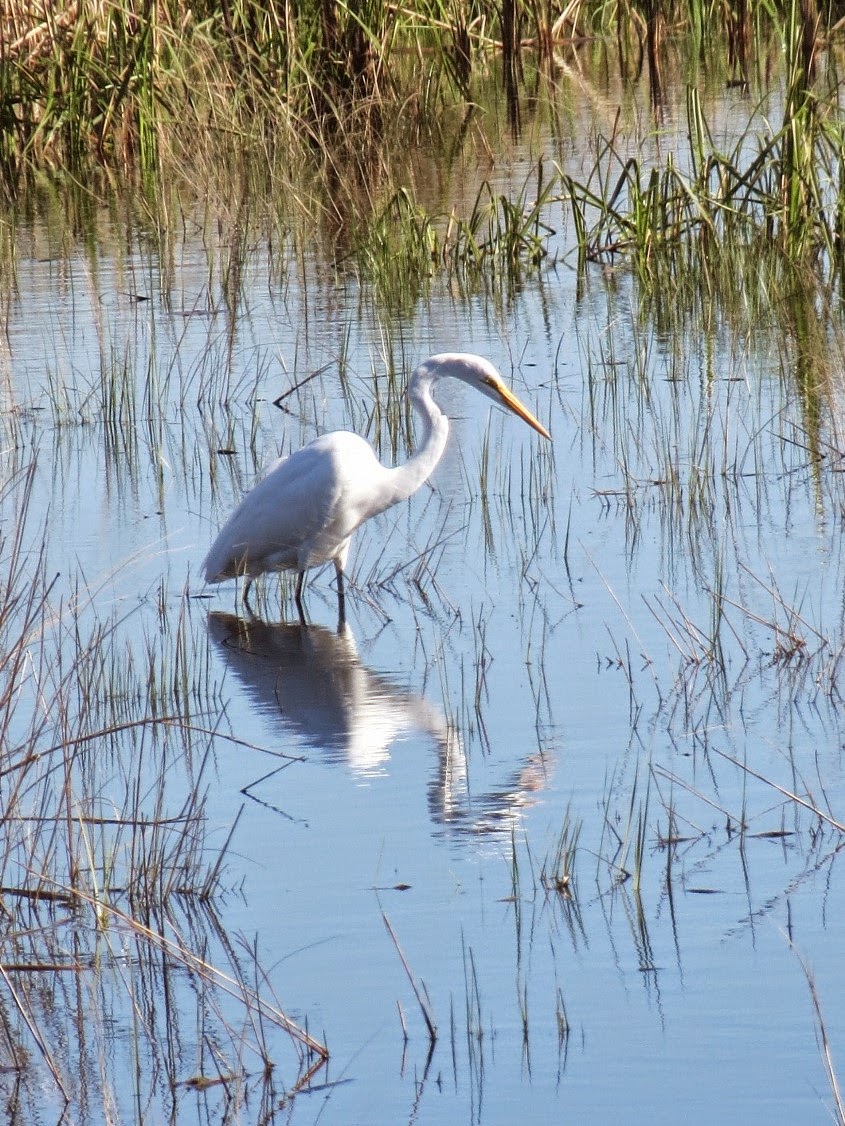 And we hope that the alligator never got interested in the little heron that was just a little too close. 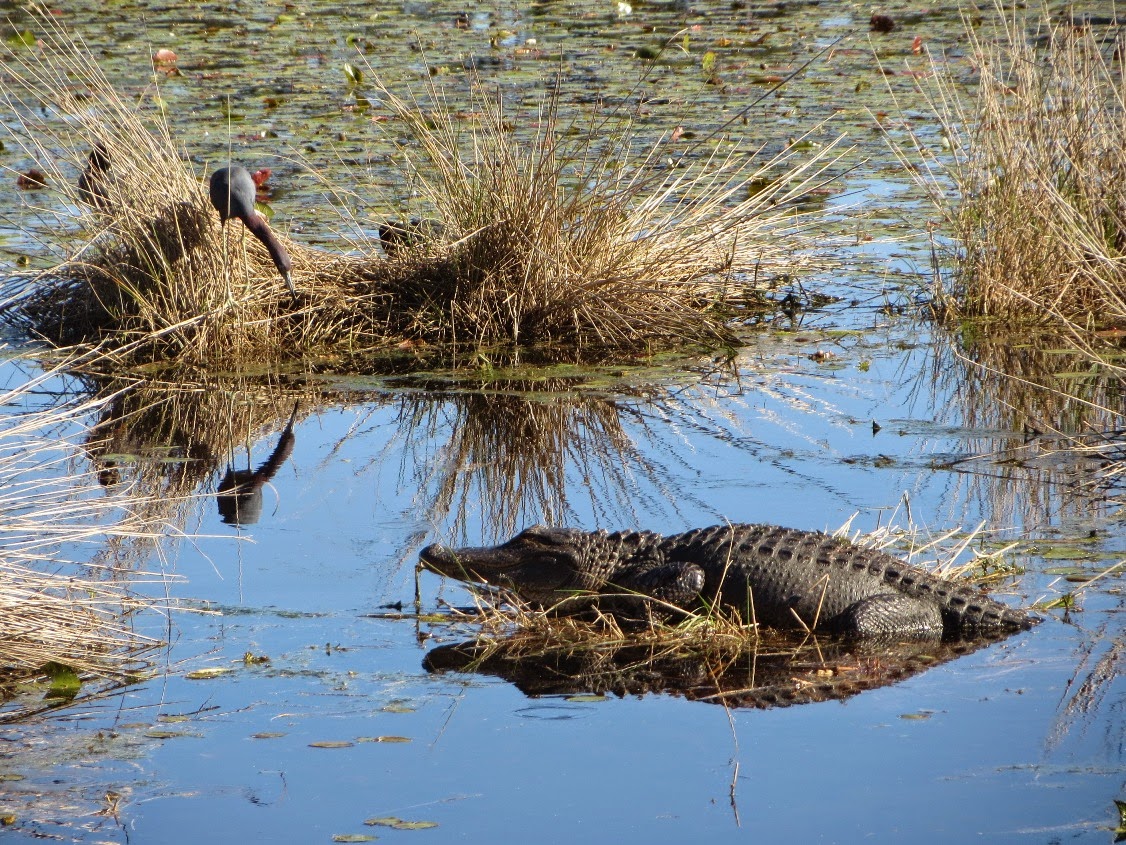 Then we headed to our favorite little dive for oysters and shrimp--except that it was closed on Tuesdays.
Sigh--went to another place--and they didn't have raw oysters.  We settled for some shrimp (poor us!)  Afterwards we went to a fun nursery that we like in the area to get some fertilizer for the fruit trees--but they are closed on Tuesdays . . . (do I sense a theme here?)
Project the Second:  The bathroom vanity. We sort of store everything under the vanity--and of course lose track of what's under there.  You know how it goes--you're down to a sliver of soap in the shower, so then next time you're at the store you buy some--two bars, while you're at it, so you won't run out again.  One goes in the shower, the other under the sink.  At the dentist, you get a little swag bag with a toothbrush and a little sample tube of toothpaste.  The latter is good for trips--but when you come back, the partially-used tube goes under the sink again.   And so on and so forth, and after a number of years you end up with this. 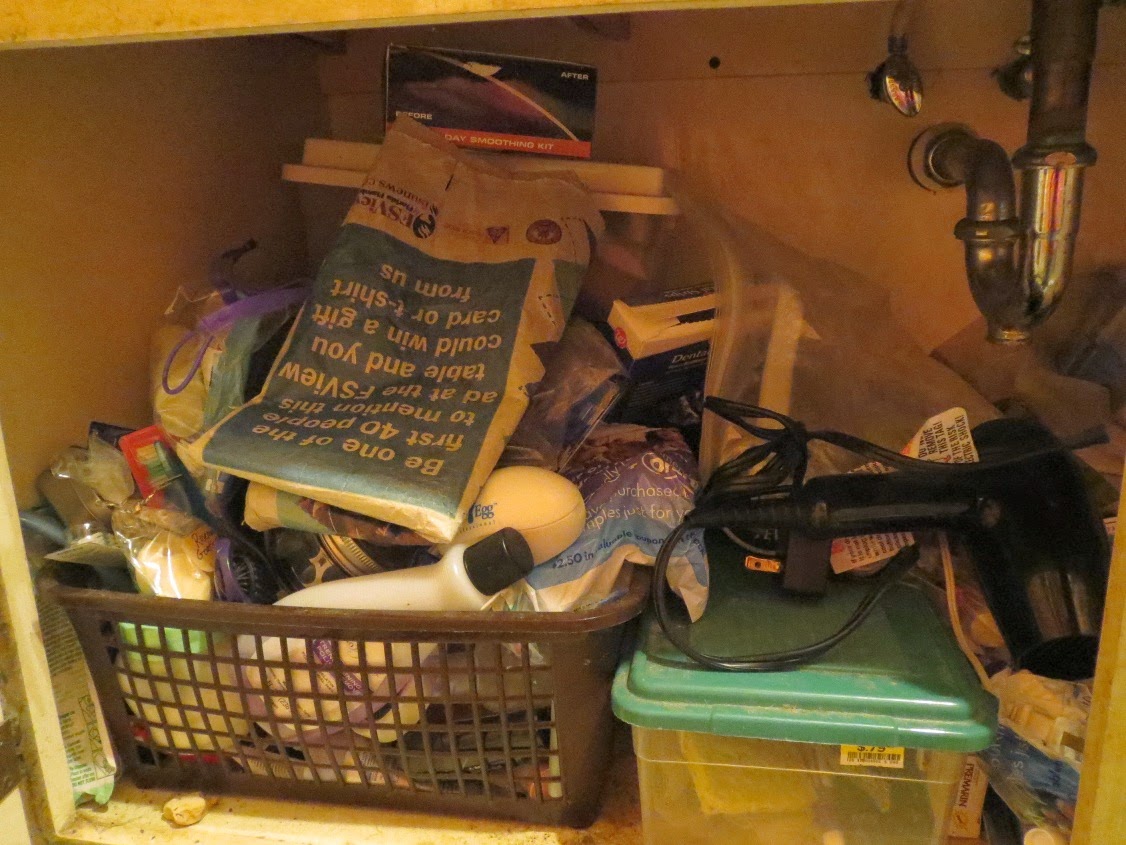 Sometimes, even though you know you have something, you go ahead and buy it because it's easier than searching under there for whatever it is.
So I dug it all out.  Rather embarrassing to admit that I had over 6 pounds of garbage. 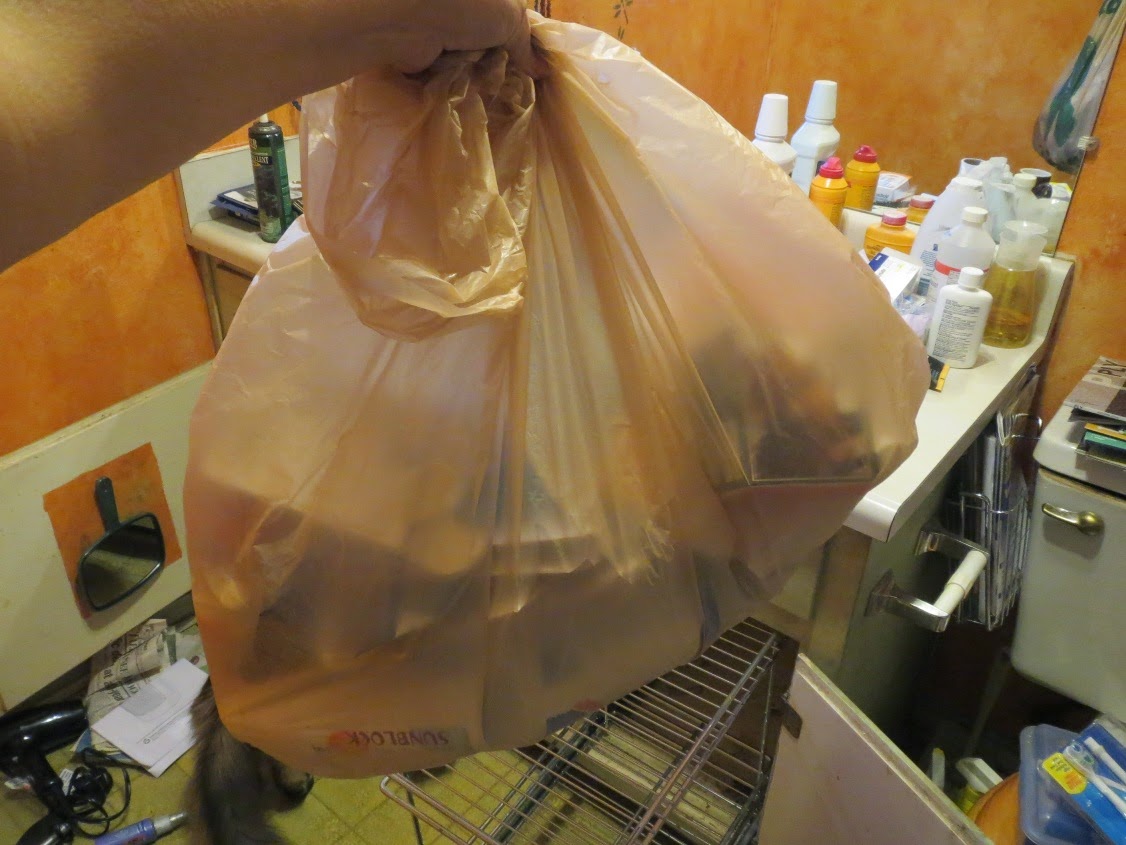 Things like very dry (and in one case, moldy--yuck) wet wipes, dried out nail polish removers, dried up samples of hand cream--you get the idea.  Got it all sorted out--including the 9 bars of soap and 30 brand-new unwrapped toothbrushes (we go to the dentist on a regular basis) (most of those--the ones still in the fresh wrappings--went to Goodwill).  8 partially used sample tubes of toothpaste (didn't toss those but we'll use them up).  And so on and so forth.
Of course, projects have a way of getting bigger.  There was a rack on the right that I really wanted on the left.  Bob moved it for me, and then Famous Last Words--"oh, while I'm at it I'll drain the P trap."  He quickly found out that the entire unit was being held together by corrosion.  So the project had to be put on hold for a couple of days until we could go to Lowes and pick up a new unit and install it.  But then everything was sorted out and in labeled boxes.  The item I'm really happy with is out toilet paper holder.  We simply cut one end off of a storage bin and screwed it to the door.  No more awkward fumbling trying to get some more toilet paper while one is indisposed. 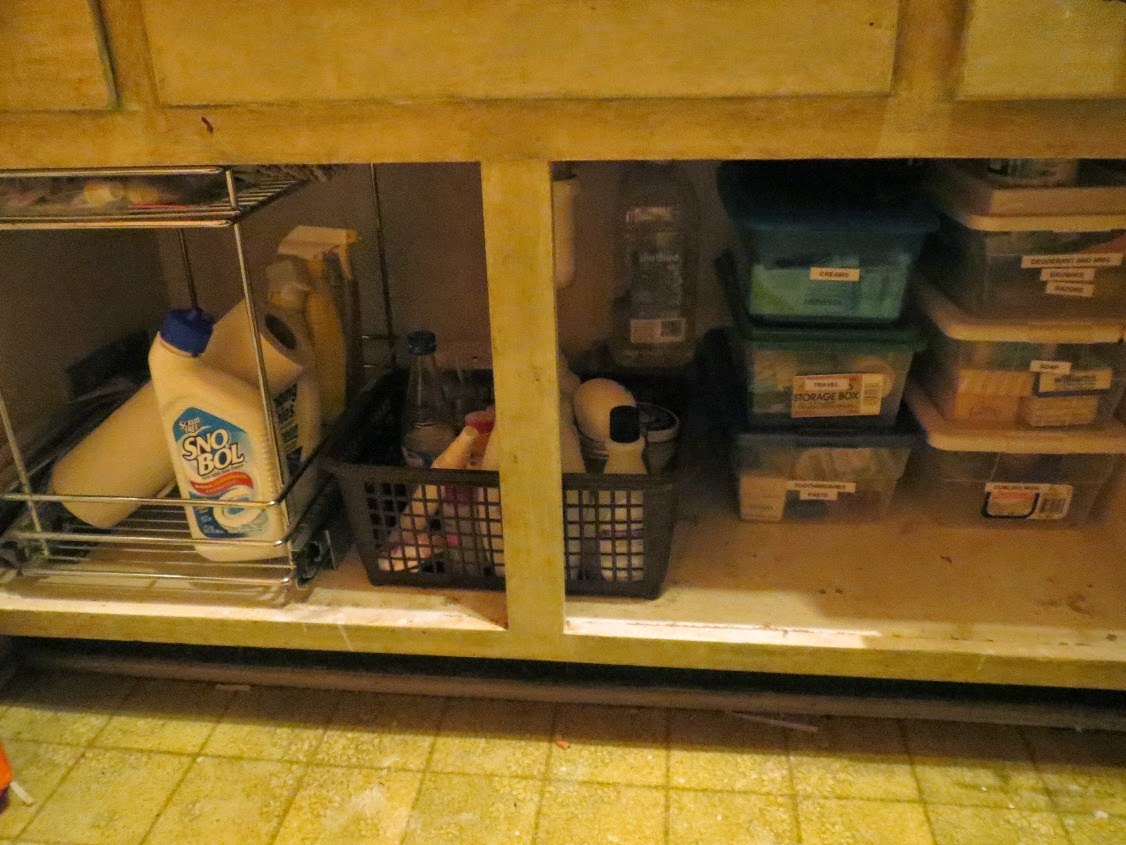 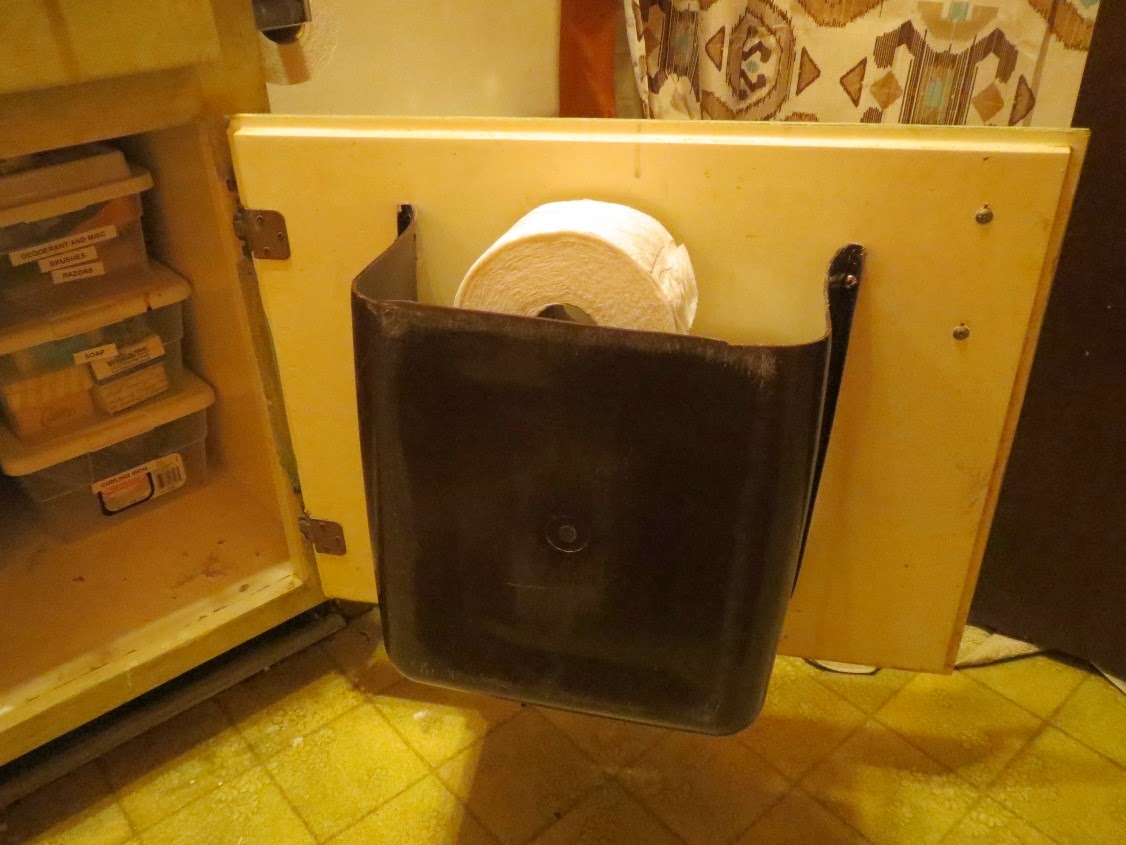 So that's done.  Then I had a fire workshop to attend, and have spent the last two days putting in a *lot* of hours on Project the Third. Details to follow.
﻿
Posted by Ann at 8:16 PM No comments: