OK--some internet connection problems, some way busy at work (so I didn' want to even look at a computer in the evening) and some just plain ennui--it's been three weeks since the last post.  So shoot me. 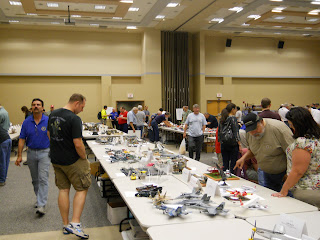 About the only big event of the last month has been the Jax Con  on Feb. 4--an annual convention of scale model builders.  Bob usuallly goes with his model making buddies.   This year, he and some friends decided that it might be an interesting idea to rent a sales table and perhaps downsize the various collections by sellling them off.  Of course, this created the problem of how to man a sales table while simultaneously wandering around looking at all the other sales tables and also admiring all the other models.

I found myself volunteering to go along to man the sales table.  Perhaps I was being haunted by the vision of Bob carrying his backpack through the Sheep and Wool Festival last May. 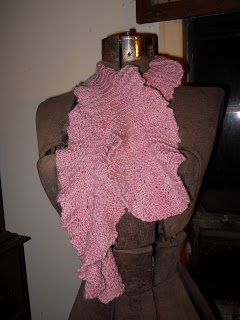 But it wasn't that busy--and a girlfriend of one of the other guys was learning to knit, so we had a small knitting circle and I got pink  scarf made.  It was originally supposed to be a gray beret--but after the yarn was spun it turned out to be more of a dirty off-white than gray, and the only dye I had mixed up was some used cochineal so the yarn came out a dusty rose, and I couldn't see myself in a pink hat so it's a ruffled scarf instead.

But I digree.  This is about Jax Con.   Bob entered 5 models--four came home with medals.  My favorite one didn't even place.  I think it's because it's a sort of "betwixt and between"  model--it told a story (being rusted and abandoned) but didn't have figures and not quite a complex  scenery to count as a diorama.  But it's still my favorite. 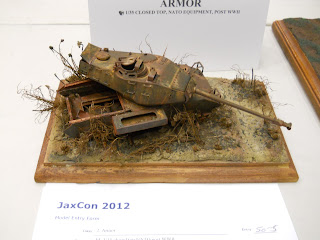 Catching up on some posts here--internet reception (and TV reception, and the phone reception) has been a little iffy for a couple of weeks.  Finally gave up hoping it would all heal itself and had the cable guy come out--turns out that squirrels like to chew on the cables.

In mid-January the Florida Retailers Federation had their 75th anniversary.  There were conferences and meetings and a reception/dinner party at the Governor's club.  We put on a display for the reception--as it was a 75th anniversary, I picked out clothing that was about 75 years old--the glamorous 30's.

For a simple display, it took awhile.  First I had to dig through the collection and find a half-dozen garments that still looked good--no stains or obvious tears.  Then I had to "audition" my various dress forms to find ones that fit.  Finally everything was boxed up, the dress forms labeled, and all hauled off to the Governor's club. 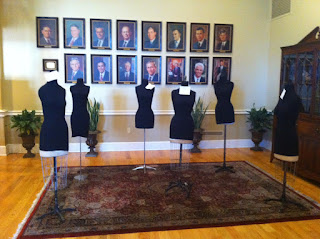 I know about historic clothing, but making things look nice is not my forte.  Because the clothes are somewhat fragile, you have to put the dress forms in place and then put the clothes on--no moving them around after they're dressed.  Fortunately one of the graduate students was helping me (thanks, Caitlin!) and with only my verbal description of the garments came up with a pleasing arrangement.  You have to use your imagination. (She also took the pictures with her phone because I forgot to bring a camera) 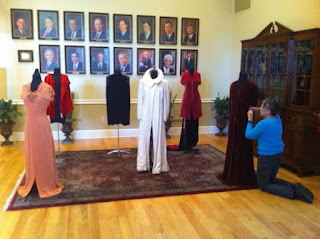 75-year old zippers sometimes don't work, so I had to do a little pinning.  Again--my job has brought me to my knees!

The finished display looked quite nice.  More of the graduate students "defended" the display (it's hard to resist touch the garments, and I cringed at every glass of red wine that approached) and talked about them.  All in all, it was a very successful display--which then had to be undressed, repacked, and all hauled back to the collection room (again--with my thanks to the graduate students, and to Ann Langston, who hauled down the dress form with me and got the back to the collection room the next morning) 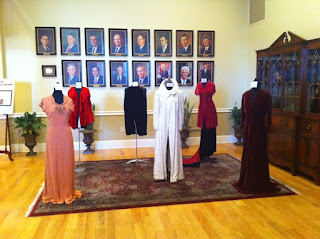