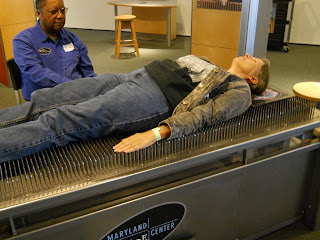 After spending the morning at the Aquarium, we headed over to the Science Museum.  They always bring out the inner kid in us--there are plenty of fun toys to play with (such as a laser harp--no strings but you play it by disrupting light beams).  And there was a chance to take a quick lie-down--on a bed of nails!

Then we wandered over to the Museum of Visionary Arts.  Alas, like many things at the Inner Harbor it closed at 5:00 but there was much cool and fun art outside.  There was also a garage with participants preparing for the annual Baltimore Kinetic Sculpture race (to be held the next day, when we would be gone.  Maybe some other time)  But we got to see some of the creations (see Kinetic Baltimore.com)

I particularly liked the huge found object bird and nest and the eagle wing door handles.  My favorite was a mirrored wind chime tree.  I'd like to have that--to make one.  Maybe not with mirrors, but it would be possible to make a big wind chime. 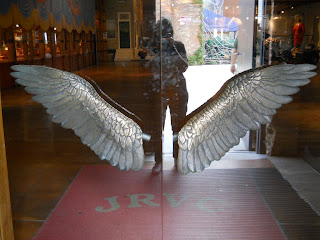 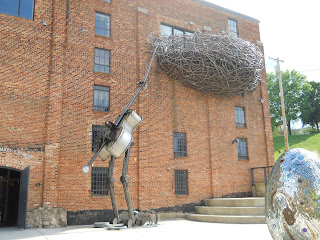 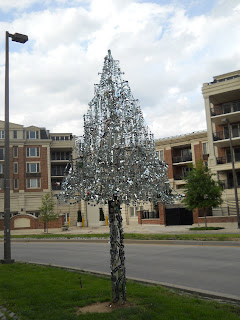 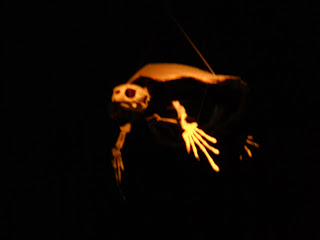 It did turn out that the aquarium was open late--and we still had our hand stamps from the morning, so we ducked in there for another hour or so.  It was much quieter and emptier without the school groups.  I got to feed crickets to the archer fish.  They hunt by shooting streams of water at bugs on tree limbs-so if you hold a cricket above the water they'll try to knock it out of your hand.  My idea of a fun time--getting a fish to spit at me!  We also walked by a display of various skeletons (turtle, penguin, dolphin).  The lighting made them much creepier than I think was intended.﻿
We spent some of the evening just wandering downtown.  Old cities are such a juxtiposition of architecture--there's the old and elegant, the old and shabby, and the new and edgy (and to me, soulless and uninteresting) all cheek by jowl.
The first two days had been such fun that we could have gone home  then and still declared it to be a great vacation.  But the real reason we went to Maryland was to go to the Sheep and Wool Festival--so that will be the next report.
Posted by Ann at 7:03 PM