What a fun couple of weeks!


Had a belated mother’s birthday visit from Mike and Margo for a few days. We had lined up some things to do—go to the Maclay gardens, maybe the Brogran museum—but ended up mostly sitting at home, playing scrabble, and having a chat fest. Then we’d pick up some goodies, head out to the parents', and have some more chatfest. No family pictures to post—none of us particularly like having our pictures taken. Pookha, Nazgul, and Apache were good hosts to keep Mike and Margo from going into cat-withdrawal. As usual, Fiona was the Amazing Disappearing Cat but Bob was able to drag her out for a few seconds just to prove that she does indeed exist (she’s 12 now, and except for Bob and I and the vet when necessary she’s quite invisible)

We did run over to Lofty Pursuits to see the candy machines. The owner, Greg Cohen (who used to be one of my advisees in the English department a lifetime or two ago) collects Victorian-era candy machines. And uses them—old-fashioned candies are made on the premises. Alas, there was no candy production that day but it was still fun to play with the toys.

Mike and Margo are such good friends as well as good family, and it’s always a happy time when we get together. Shame that Boston and Tallahassee are a bit far apart—we *told* Michael to invent that transporter. 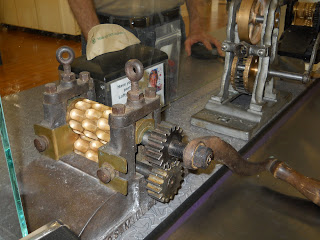 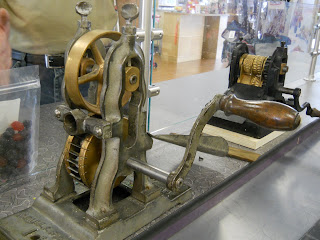 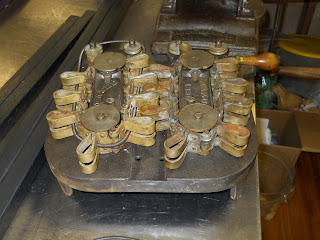 We must have *really* missed them when they left, because we both promptly became sicker than the proverbial dog.  It was chancy timing--because less than a week after they left we were going to Maryland for the big Sheep and Wool Festival.  But other than being a few pounds lighter (which didn't last, alas) we were both well and ready for the trip.
Posted by Ann at 8:35 AM