A Disappointing but Lovely Day

We are on the last weekend of our break--Monday we return to work :-( 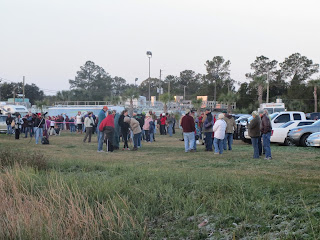 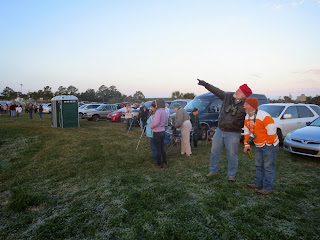 Why were we all out there in the cold post-dawn morning?  Because we would have a chance of seeing this. 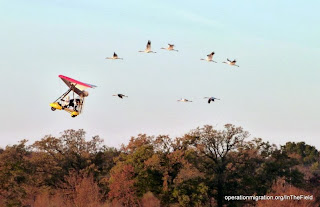 That's an ultralight leading a small flock of young whooping cranes on an almost 1100 mile flight from Wisconsin to their winter refuge at St. Marks.  As of this morning, they had 28 miles to go, and would be flying over the park.
It didn't happen  :-(   The flyover originally was supposed to be on New Year's Day--but it was raining.  The second and third were too windy.  Today almost seemed perfect.  Almost.  Put a capital "A" on that.  The winds aloft were too variable and the birds couldn't line up alongside the plane and kept going back down.
I can't help but feel sorry for their escorts.  The flight has taken 95 days so far--and there's only 28 miles to go.  The next 3 days don't look likely.  Me?  I'd be shoving them in the back of a van, drive them to the refuge and call the job done.
So what does one do when you've gotten up before the crack of dawn and The Event doesn't happen?  Well--you enjoy the gift of a beautiful (if chilly) morning with friends.
First things first--hit a local Southern restaurant for the breakfast buffet.  Fortified with cheese grits,  eggs, biscuits, gravy and hot coffee, we were ready to go to Wakulla Springs for a morning boat ride.
Uh--turns out they don't even sell tickets for the rides unless the temperature is at least 40.  That's usually not a problem here--but it was only 34.  That meant killing an hour or more so we wandered out to the boat dock and eventually over to the two-story diving platform.
Where we watched the manatees--at least 20 of them.  I don't know what it is about these big gray blobby creatures that just makes people go weak in the knees.  They certainly don't win any beauty contests.  Any sailor who thought that one was a mermaid must have been looking through the bottom of the rum barrel.  But they're adorable--especially if you have a mother and baby. 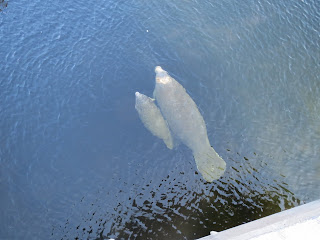 We were happy to be watching them from the tower.  But one young couple braved the cold waters of the spring to go swimming with them (this is allowed as long as you don't try to touch them).  Granted, the water was warm relative to the outside air temperature.  But relativity be damned--the springs run 68 degrees year round, and that's *cold* water.  We weren't the only ones wondering what the heck they were doing--at one point they were surrounded by seven manatees, who did not know about the "no touching" rule.  I hope it was worth the hypothermia. 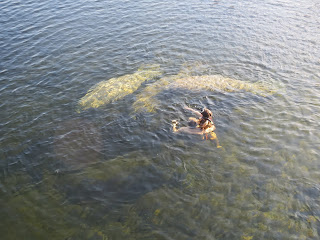 It was finally warm enough to go out on the boat.  The morning light was beautiful. 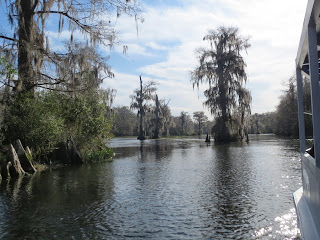 Despite the chill, we saw a good number of birds and several alligators. 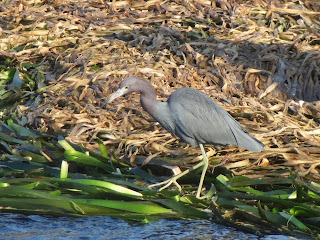 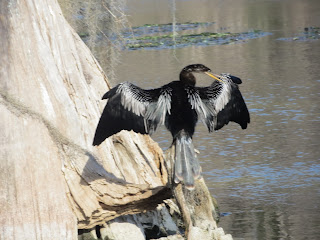 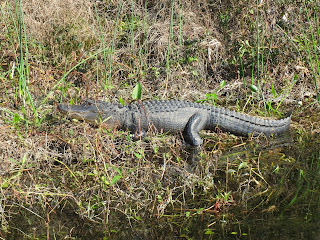 We dropped the guys off at home and went to the Museum so that I could work with the hawk for awhile.  Judith--the woman who cooks on the wood-burning stove in the old farmhouse--had made homemade peach cobbler so we visiting there post-hawk.

All in all, we had a completely beautiful day.  And, with any luck, there will be another flock of whooping cranes next year.
Posted by Ann at 5:38 PM